A map tells us that Ronnie’s Country Store sits at the busy corner of Cherry and Seventh in Winston-Salem, but a visit confirms that its real location is the intersection of then and now. The bustling neighborhood feels more downtown than small town, except for Ronnie’s storefront, where bushel baskets and deep boxes hold fresh, seasonal produce. Handwritten signs point out the day’s specials, as they always have, while sheaves of shopping bags on hooks whirl in the breeze. The front door — no automated glass panels here — is painted bright red, to make sure, as owner Ronnie Horton puts it, “folks know how to get in.”

Inside, the shelves are laden with a curated mix of Southern staples and once-common brands that now feel like delicious memorabilia. Every North Carolina town once had a place like Ronnie’s — or three or four — but they’re harder to find now. By staying true to its nature, Ronnie’s has remained a country store, even as the city has closed in around it.

On Thursdays or Fridays, Ronnie tops off his bean bins so that they’re brimming with shiny little legumes for the weekend crowd, most of whom know him by name. Depending on the day — except Wednesdays and Sundays — he’s hustling from one corner of the store to another: working a register (there are only two), slicing country ham, stocking shelves, answering the phone in the back office, and greeting folks up front. 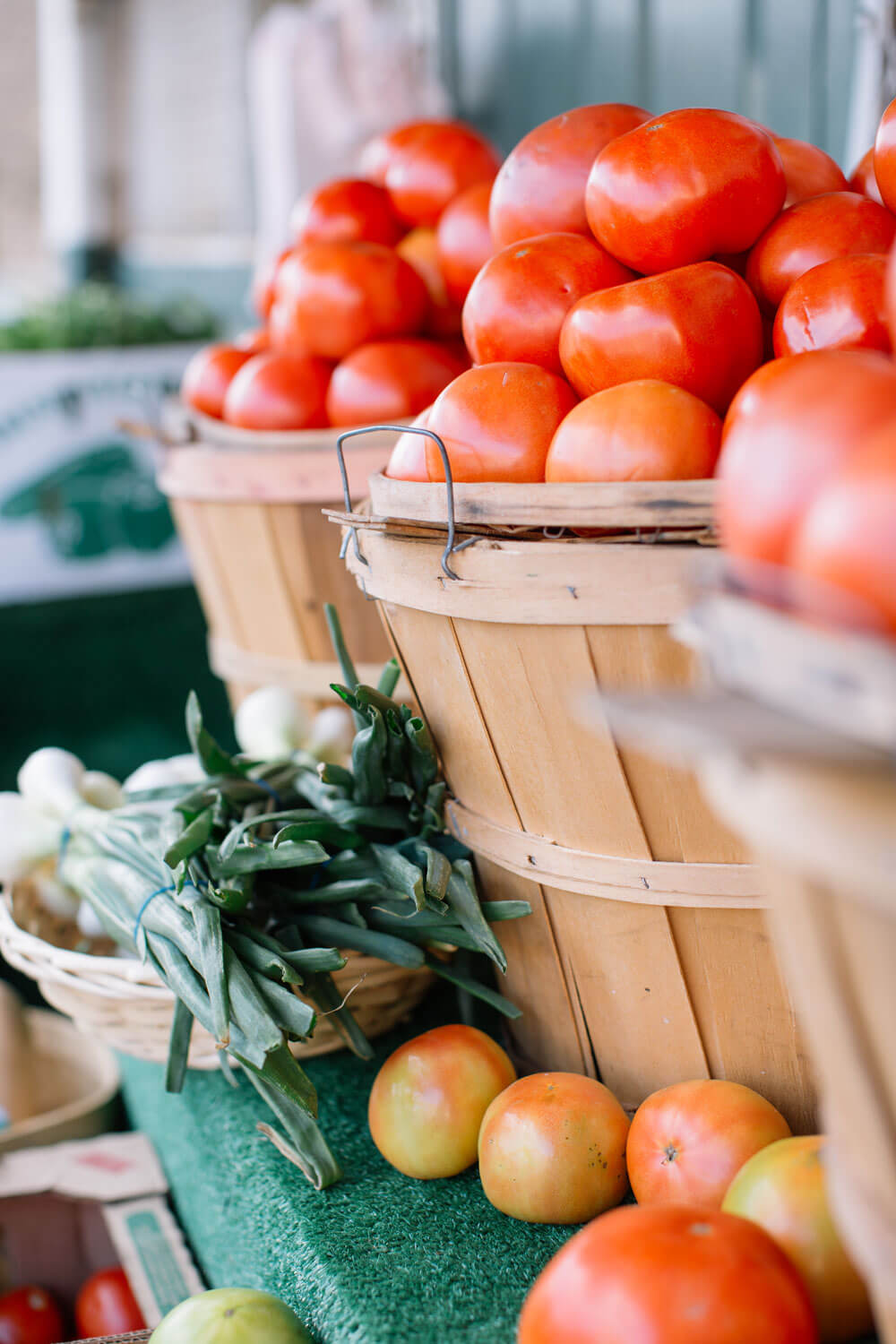 Customers are just as loyal to the fresh produce stacked by the front door as they are to Ronnie’s country ham. photograph by Revival Creatives

Ronnie, 69, has been owner, heart, and soul of his eponymous market since 1994, when he purchased it from members of the W.G. White family. A local boy, he grew up knowing about the store. His dad had worked for Mr. White until the family moved out near King, where Ronnie still lives. Throughout the years, the Hortons remained friends with the Whites. One day, Ronnie stopped by the store for a visit with Doug White. He mentioned that he’d like to run his own market someday, to which Doug replied, “How’d you like to have this one?”

Ronnie didn’t change things when he took over, much to the relief of loyal customers. He did, however, add more standard groceries — sugar, cornmeal, cake mixes, and the like — so that his elderly and low-income shoppers, who live nearby and don’t drive, wouldn’t have to go elsewhere for staples. While he’ll gladly adjust inventory when customers need or want something new, he’s found it harder to make peace with the fading popularity of certain Old North State delicacies. “We used to sell lots of souse meat and liver pudding — today it’s not near what it was,” he says. “Cracklins, you can’t get those anymore. 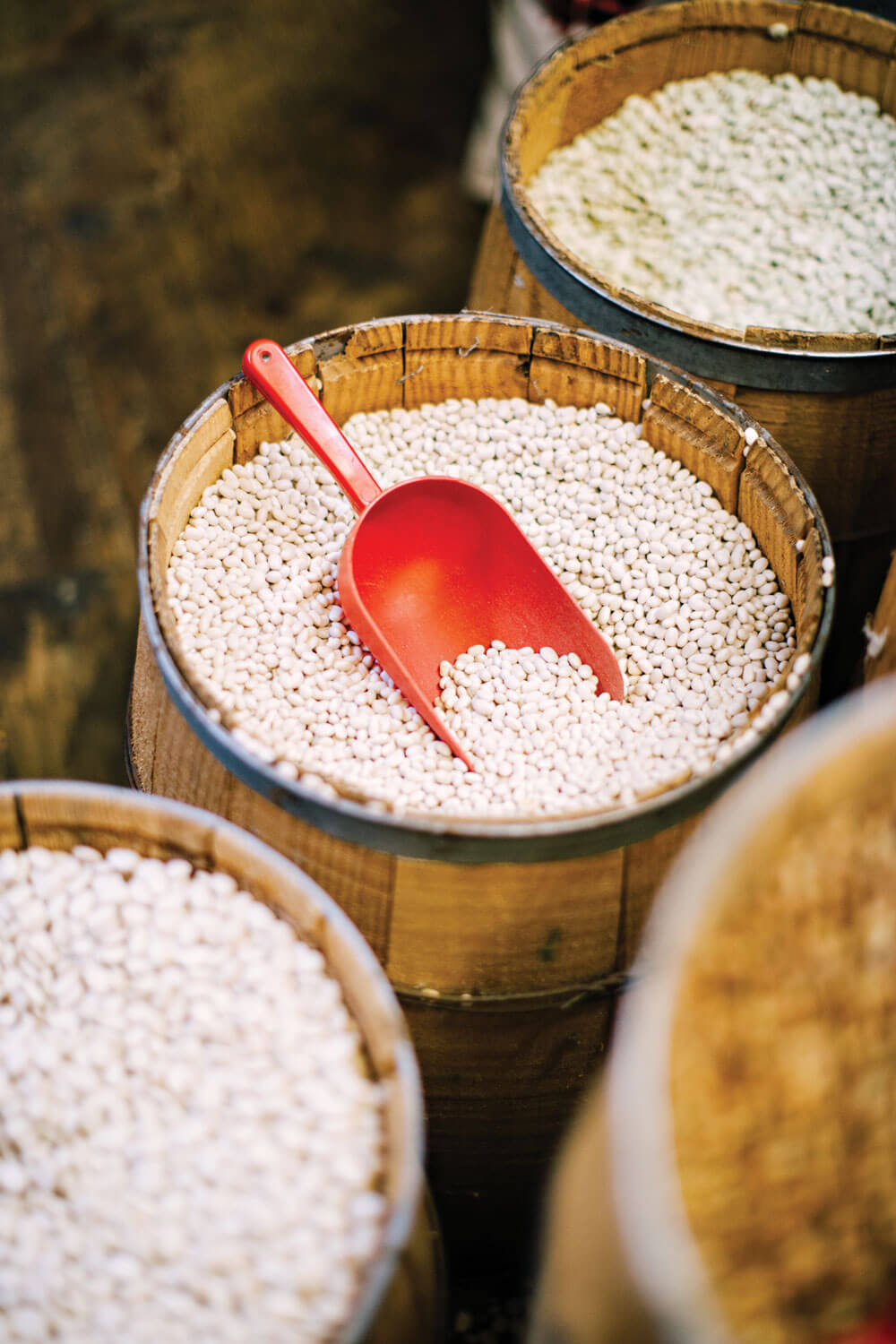 Ham and bean soup, anyone? Ronnie tops off his bean bins weekly, just in time for the rush of weekend shoppers photograph by Revival Creatives

Still, there’s consolation in the fact that, from time to time, his shelves entice a tourist, lured by a review on social media, to try something new — say, a jar of pickled okra, brined in Winston-Salem. Ronnie knows that for a place like this to survive, the next generation has to embrace it, too. He’s got that covered: Every year, local schoolchildren on field trips flock to see the enormous cast-iron wheel that moves the store’s hand-operated freight elevator, just as it has since it was installed in 1925. They may come for the history lesson, but no doubt they’ll be back for the baskets of old-time candy.

Another relic, newly gone but not forgotten: Next to the front register, there used to be a wooden stool for those who needed to sit a spell, or just pause for a chat, as so many folks do at Ronnie’s. A customer was so taken with it that Ronnie recently sold it to him. A replacement stool was found soon enough. “This is kindly a gathering place,” he says. “I’ve never been in so big a hurry that I can’t talk and listen.” 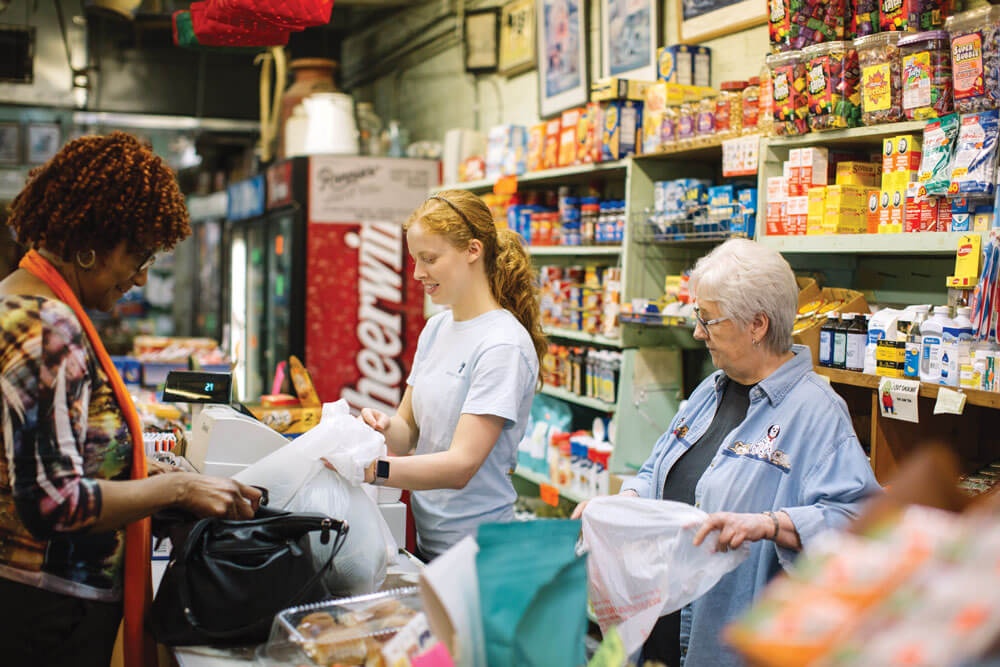 Employees and customers often know each other by name and take time to chat at the register. photograph by Revival Creatives

That country-store spirit brought legendary local Maya Angelou through Ronnie’s red door some 18 years ago. Even in her later years, she continued to come by — “to visit, more than anything else,” Ronnie says — because the place reminded her of her grandmother’s country store. The world-famous poet and professor brought her own stool — the foldout kind — to deploy in the corner, where she could sit and talk with folks. When Ronnie’s sister wanted to compile customer recipes for a store cookbook, Angelou kindly offered to write the preface. Ronnie’s Country Store Favorites now begins with Angelou’s words: “I grew up in a store owned by my grandmother, which was a twin to Ronnie’s. I learned to read sitting by the barrel of lima beans. I learned to count sitting near the shelves of pickled pigs’ feet. Each time I enter your store, I am carried 60 years back to my childhood and I can almost hear my grandmother in another room saying, ‘Sister, sister stay away from the candy counter.’”

There are only two aisles at Ronnie’s. The rest of the store is divided into sections by product displays: Barrels of dried beans and peas, as shiny as gemstones, are flanked by sacks of cornmeal and flour, their necks tied shut with twine. Vintage refrigerators chill hoop cheese, livermush, jugs of milk, and bottles of pop. Everywhere, there’s something to make one exclaim, “I never thought I’d see this again!” or “Have you ever seen such a thing?”

It’s a lot to take in, but it’s just a preamble to the country ham display in the back of the store, the most popular thing at Ronnie’s. There’s ham in every size and shape, from hanging whole hams to bins of hocks, streak-o-lean, and fatback. Shoppers who drive in buy the sealed packages of sliced ham, often an armload at a time. Locals, however, get ham cut to order, from a single slice to a great tall stack. At week’s end, the legendary home cooks arrive, those of the generation that still believes in Sunday dinner. Without a big family to cook for anymore, a slice or two for their after-church biscuits is both good and plenty. 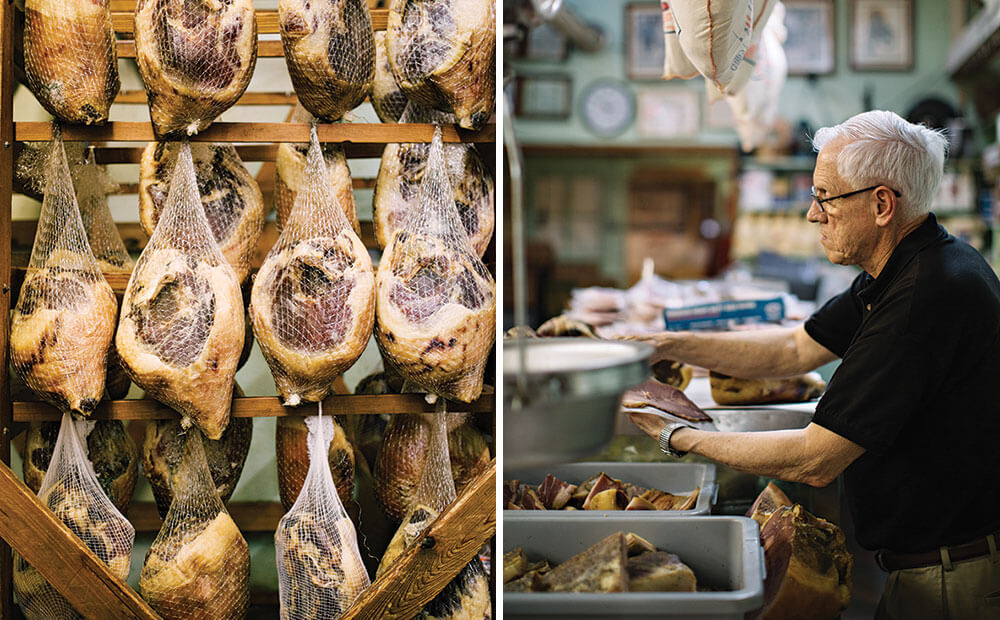 All of Ronnie’s country hams are sugar-cured in North Carolina and can be purchased whole or by the slice. photograph by Revival Creatives

Ronnie’s three kinds of country ham are all sugar-cured and aged from eight to 12 months. The most popular brand is from a family operation in Landis in Rowan County that proudly uses a curing method developed decades ago by the ham geniuses at North Carolina State University. “That’s 90 percent of my ham,” Ronnie says. “They got it right.” The ham from Taylorsville in Alexander County is no slouch either: It’s aged 12 months and promises a more distinctive and salty country ham taste. “Young people eat it and say they remember that flavor from their grandma’s house,” Ronnie says. Still, there are traditionalists who ask, “Have you got any that’s more salty?” Those folks take home vacuum-sealed packets of ham from Johnston County.

Ronnie runs his whole hams through a vintage Hobart slicer, which only four people have ever operated — mostly, though, it’s been Ronnie. He rips off a sheet of white butcher paper, pristine as freshly starched linen, to wrap each order, and marks the top with a wax pencil. For those who just can’t wait to get home for their ham fix, Ronnie has that figured out, too: Every other Saturday, as customers roll in, he fries up country ham to wedge inside soft rolls for his version of ham biscuits, a free treat: “A comfort to those who eat ham all the time and know how bad they want it,” he says, “and an education for those who’ve never tasted real country ham, and have no idea how bad they want it.” Plus, it makes the store smell good.

Ronnie’s sliced ham is so famous, in fact, that it became the talk of the State Capitol. Nearly 20 years ago, Ronnie’s beeper went off with the code reserved for dire emergencies. He hurried back to the store, figuring there’d been an accident with the Hobart. Not quite, but it was bad, all right: State inspectors had marched in and shut down the ham slicing because, in their opinion, country ham was fresh meat. The fact is, of course, that properly cured country ham has so little water that it can be stored safely at room temperature. It’s one of the oldest and safest ways to preserve pork.

Ronnie explained that the hams had never been a problem before, but the inspectors, talking of “vicious germs,” were concerned that someday they might be. Word of Ronnie’s trouble spread quickly and soon reached the ears of State Senator Hamilton Cowles Horton Jr. (no relation). Senator Horton, known to all as “Ham” (truly) had constituents in Forsyth County. Plus, he liked country ham. In some of the swiftest bipartisan action in state history, Ham sponsored the Country Ham Preservation Act to exempt small markets that sell country ham from regulations that apply only to fresh meat. The senate bill sailed through the legislature. 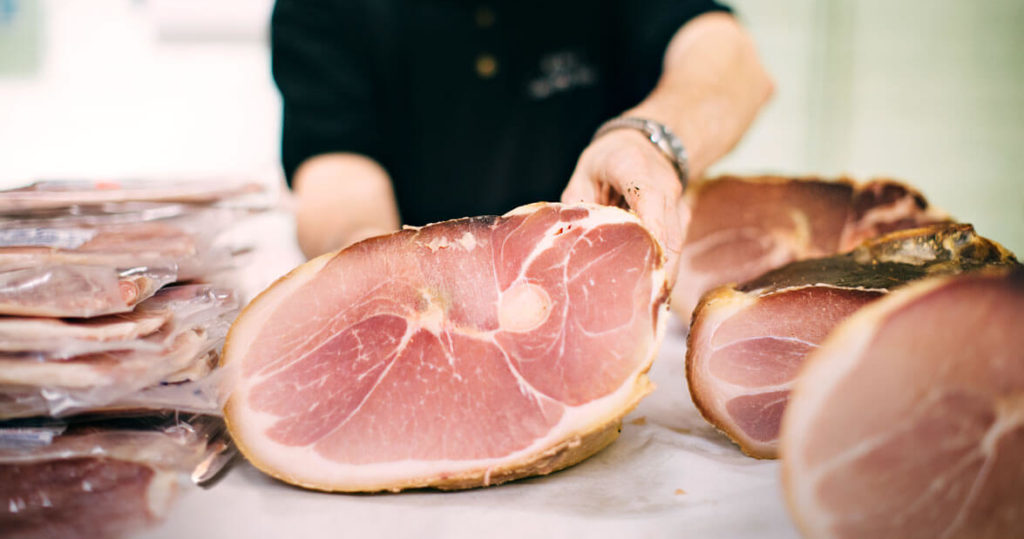 Ronnie is modest about his Hamgate victory, but he did keep a copy of a letter from the senator and several newspaper articles that documented it all. They’re buried in a box that sits within easy reach in his office in the back of the store. It’s a big cardboard box, filled with yellowed newspaper clippings, pages torn from magazines, and letters from decades of satisfied customers who became steadfast friends. An empty scrapbook acts as a paperweight on top. Ronnie reaches in and pulls out one of many handwritten thank-you notes. But he doesn’t have time to read it. A familiar creak in the wooden floor makes him look up to see who’s walking his way. “Hey!” he calls out with a wave. “I’m so glad you’re here. What do you need today?”