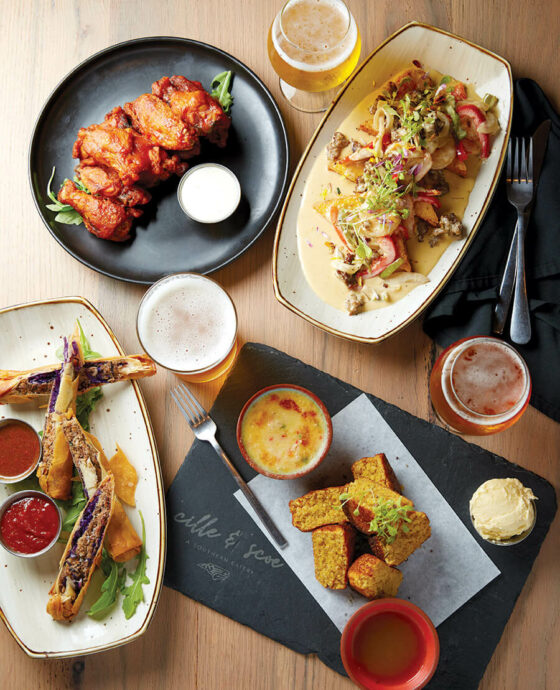 Lucille and Roscoe watch over ’cille & ’scoe restaurant in downtown Greensboro from a pair of black-and-white portraits.

The paintings, created by Greensboro mural artist Jeks and based on a set of old photographs, take up almost an entire wall in the seating area. In one painting, Lucille sports pearls and shows a slight smile. In the other, Roscoe, clad in a suit and tie, casts his gaze over the dining room. The mural is the first thing visitors see when they walk into the restaurant, which was started by the couple’s grandson, Sean Reaves, in 2021. 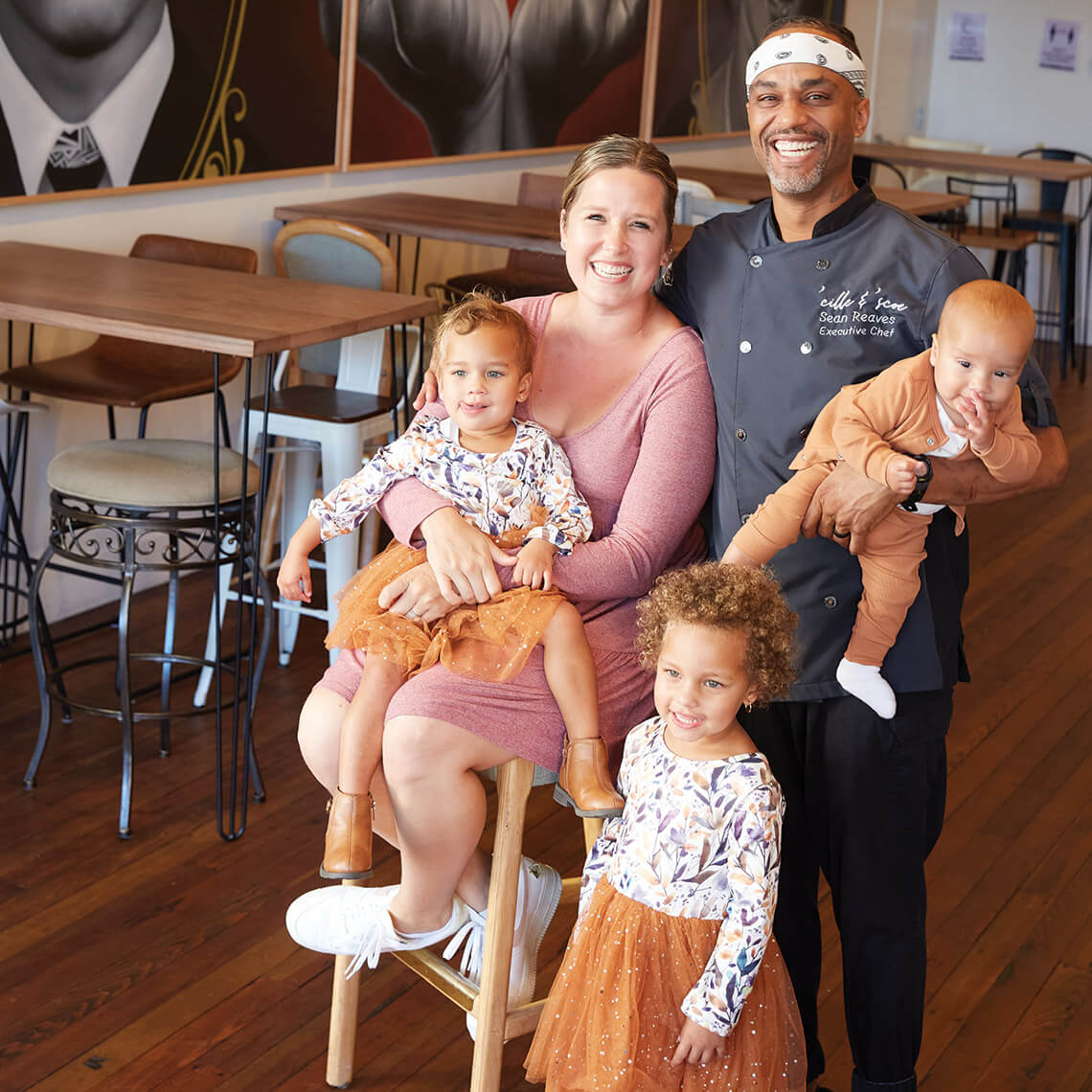 Owners Tara and Sean Reaves and their children, Halston (standing) and Sutton, both 3, and 7-month-old Bëar. photograph by Stacey Van Berkel

Sean received his earliest culinary training by shucking corn and peas at his grandparents’ house. Now, he’s honoring their legacy with a namesake restaurant. A longtime veteran of the Triad dining scene, with 1618 Midtown and Green Valley Grill on his resume, Sean and his wife, Tara, offer an eclectic take on traditional Southern fare and a taste of what he experienced in his grandparents’ kitchen.

The restaurant’s name is a conversation starter. People want to know how to pronounce it correctly and what it means. “’Cille was always what siblings and cousins would call my grandmother Lucille,” Sean says. “And my grandfather, his name was Roscoe. I don’t think I ever heard anyone shorten it, but in my head, I shortened it to ’Scoe.”

Roscoe worked for Western Electric, and Lucille for Piedmont Jewelers. (They died in 1983 and 1998, respectively.) The couple also practiced farm-to-table cooking before it was trendy. Lucille, especially, loved gardening, Sean says.

“She was an old country girl from Chatham County,” he says. “She had a half-acre plot that she shared with a neighbor in Greensboro. And I grew up with that garden … What she couldn’t grow, she would always send us on missions to get. She’d tell my dad, ‘So-and-so’s got strawberries. Why don’t you go pick me some.’ ”

Sean knew relatively early on that he wanted to cook for a living. In his teens, he took a job at Applebee’s, and in his early 20s, he was set to go to culinary school in Florida. However, the week before he was supposed to leave, his car broke down. He contacted a chef who had interviewed him for a job a few months before he decided to go to school, and the offer was still on the table. Over the next two decades, Sean worked at other restaurants in the area, and met Tara, a former kindergarten teacher, while cooking at Southern Roots in Jamestown.

“She had a chef’s palate,” Sean says. “We would go out and have Vietnamese soups, and she’s picking up on things I’ve missed, or that I can’t put my finger on. Very early on, it became pretty obvious to me that she really enjoyed food.” The couple now has three kids, including Bëar, who was born earlier this year and whom Tara carries while conversing with diners in the restaurant.

When Sean first started toying with the idea of striking out on his own, he thought about getting a food truck. But after coming up with some ideas, Tara convinced him to think bigger. “She said, ‘This is too good for a food truck. We need brick and mortar,’ ” he recalls.

The restaurant sources many of its ingredients locally. About 90 percent of its meat and vegetables are procured within North Carolina. A good deal of produce comes from Rolling Meadow Farm in Browns Summit, which is owned by Tara’s parents. The restaurant also serves cocktails made with C.B. Fisher’s whiskeys, distilled by Fainting Goat Spirits a few blocks away.

“It’s not about trying to be part of a trend or a movement,” Tara says. “It’s about what the North Carolina earth is providing for us in this season. Let’s take that and make a menu. It’s kind of the opposite of how everyone else does it, which is to create a menu that sounds good, and then seek ingredients.” 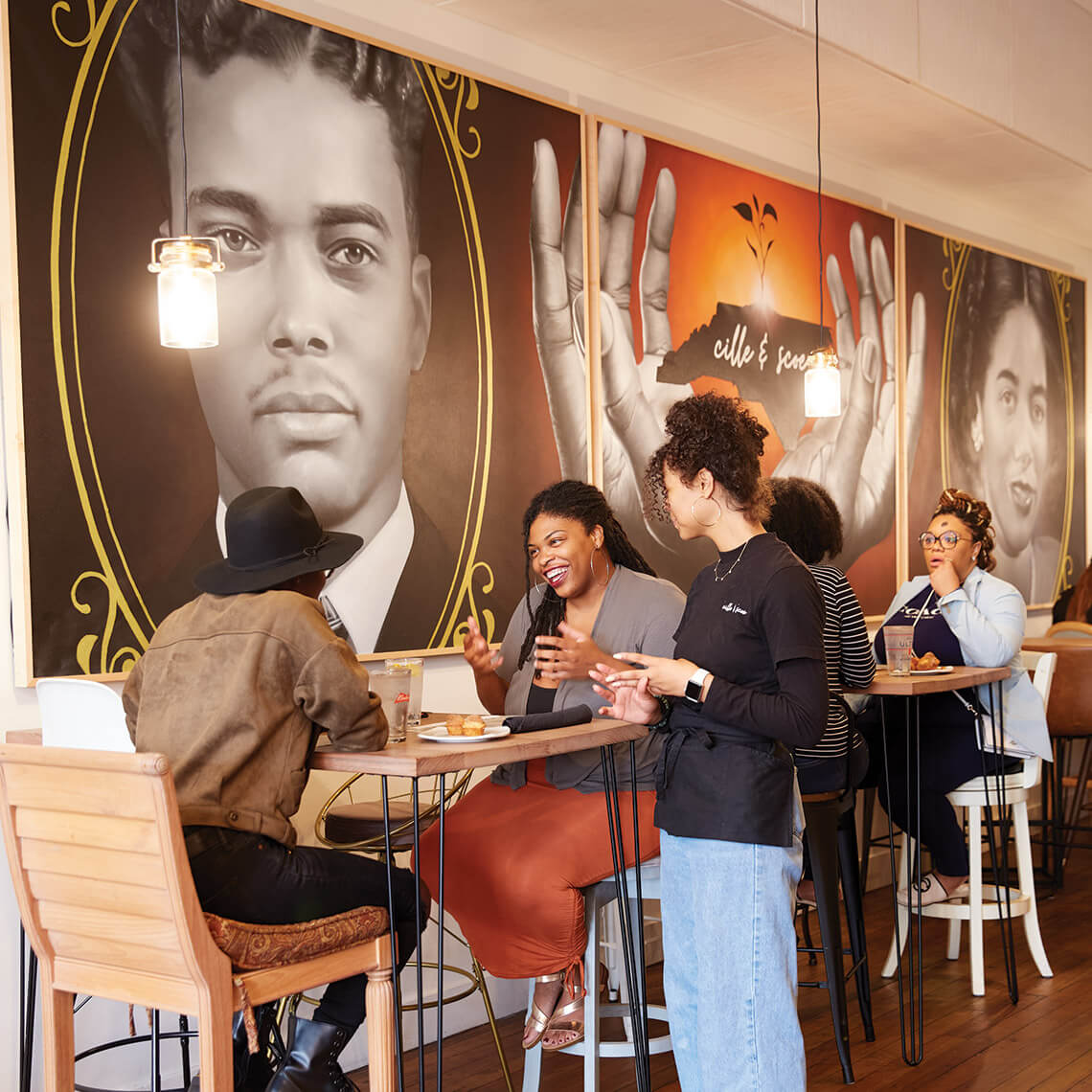 The legacy of Sean’s grandparents also lives on in other ways. Lucille once brought back some peppers from a trip to Hawaii. Sean’s aunt still grows peppers descended from those in her garden. “She dries them out and gives them to us, and we use them in our wings,” Tara says. “And that connection to her, that feels really special.”

Sean doesn’t try to re-create his grandmother’s dishes but rather reinterpret them. In one dish, which has appeared on the winter menu, he did a take on chicken and dumplings by rolling the chicken in the dumpling dough like an enchilada. “I didn’t change the chicken and dumpling recipe; it’s just presented differently,” he says. “It’s something new, but it takes you back.”