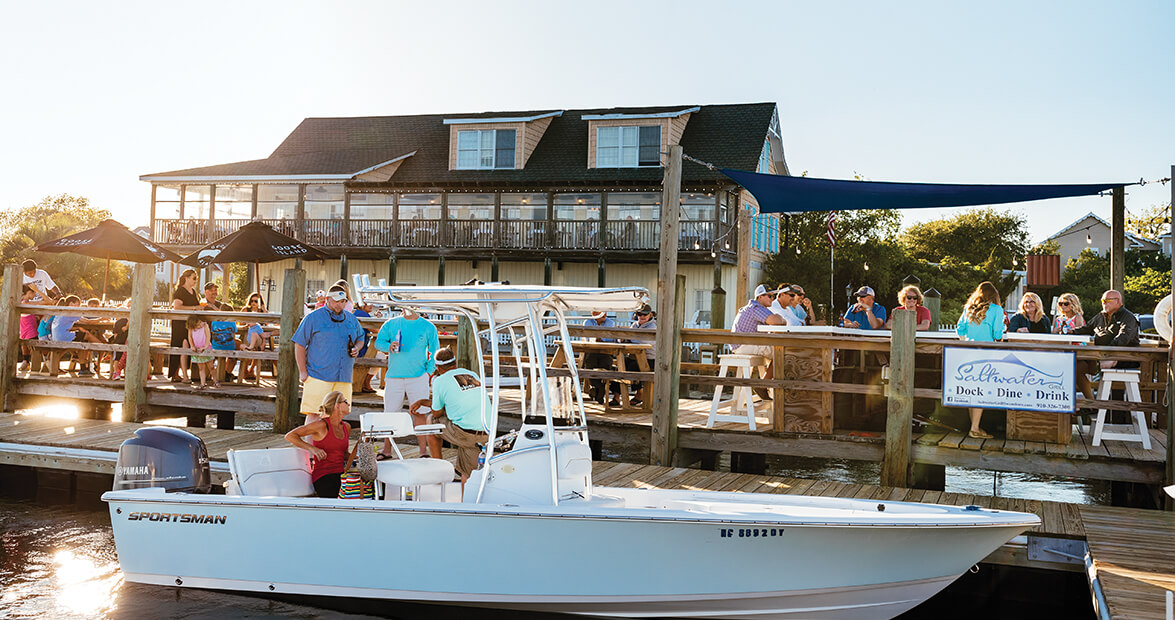 Editor’s Note: This story originally ran in the August 2017 issue of Our State.

Way up a wide, sea-blue staircase, diners at the Saltwater Grill get something extra with their shrimp pasta, fire-grilled rib-eye steaks, and crab-encrusted grouper. On the balcony, they take in broad views of the White Oak River and the Intracoastal Waterway, both of which cradle the village of Swansboro on the eastern edge of Onslow County.

Sandbars and islets dot the water, and shrimp boats rest in their moorings on the far side of the river. The Atlantic Ocean is only five minutes away by boat, and Hammocks Beach State Park stretches just across Hawkins Bay. At one end of the restaurant, dinner is served with a view of the sun setting over the water: The seascape turns a fiery orange, and shadows stretch long across Swansboro’s quaint downtown.

In warm weather, boaters can navigate into the public slips at the base of the restaurant and take a table right on the dock. Wearing swimsuits, shades, and sunscreen, they lunch on shrimp burgers, lobster cake sandwiches, bacon-wrapped scallops, and mahi-mahi tacos.

The water is as central to the restaurant’s origins as it is to its views. One warm afternoon in 2011, Kim Pierce and Mike Egan hopped on Jet Skis in Jacksonville and zigged down the New River, then zagged up the Intracoastal Waterway to Swansboro, where they stopped for lunch at a steak-and-seafood restaurant overlooking the waterfront historic district.

Though Pierce and Egan were only in their early 30s at the time, they already had years of experience in the dining industry — they’d hustled in food-service jobs as students at East Carolina University, and one or the other had tended bar, coordinated special events, or run the business side of restaurants ever since. The couple eventually moved to Charlotte, where Pierce worked as the catering director at a country club, and Egan managed accounts for a software company that worked with restaurants. 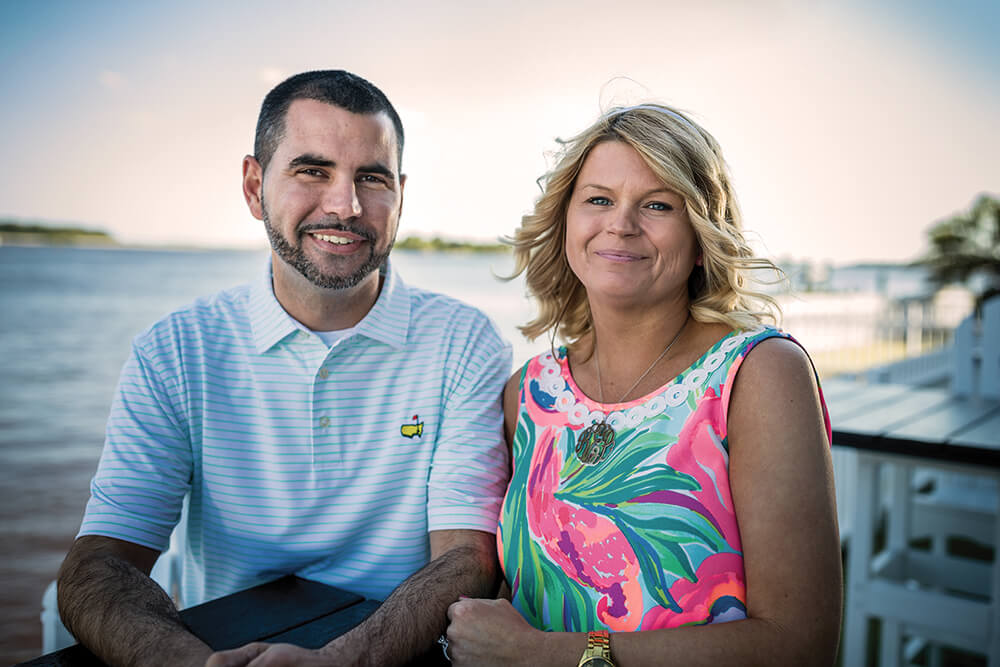 During their dockside lunch, they gazed up at the restaurant and out over the vast, quiet water. Both felt the allure of the same dream. “I wish we could own a restaurant like this,” Pierce said.

“If I were going to take a risk, a leap, I’d rather do it now,” Egan replied.

And that was the end of it — until a few months later, when their friend Tim Anderson approached them. “It’s not on the market,” he told them, “but if it were, would you be interested?”

Indeed they were, and in April 2012, they partnered with Anderson and took over as owners of that very restaurant, which they renamed the Saltwater Grill. Together, they’ve established a casual restaurant built around friendship, familiarity, and the fraternal feel of a tight-knit community.

And water. Lots of saltwater.

In fact, when the weather cooperates, Chef Martin Berndt has been known to skipper his boat to work — a seven-minute trip by skiff that beats the 20-minute commute by car. He admits that returning home in the dark after a long shift in the kitchen can get tricky on the waterway, but he’s found that learning the feel of the tides is just a part of life in Swansboro.

“Coming here was the sun, the moon, the stars — a very acceptable, welcoming challenge,” says Berndt, who grew up in Germany as the son of a three-star Marine general and studied culinary arts in France. He cooked in restaurants, country clubs, and hotels in Germany, Pennsylvania, and Greenville before joining the Saltwater Grill — lured, in part, because his wife is Pierce’s best friend.

His menu draws upon the area’s abundant seafood. Flounder, shrimp, oysters, yellowfin tuna, and grouper all occupy regular spots, while conch and squid show up from time to time. Berndt confers regularly with local seafood brokers, who call with reports of the latest catch. He also offers some surprises, including Asian-inspired shrimp stir-fry linguini, Creole-marinated alligator-and-jalapeño bites, and, in honor of his European childhood, Bavarian soft pretzels. 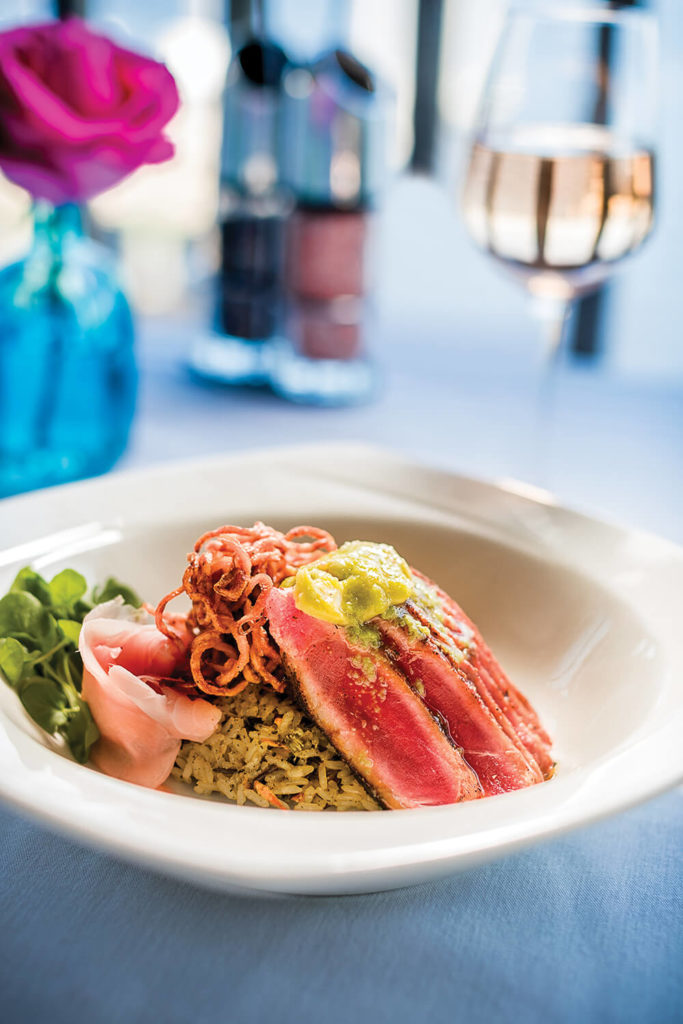 “It’s a wonderful opportunity for me,” Berndt says. “From the people to the climate, everything suits me. I’ve basically been around the world, and this is the [place] I’d pick.”

The Saltwater Grill has deep roots in North Carolina. Pierce was born and raised in Wilson, while Egan, like Berndt, came from a Marine family and spent much of his youth in nearby Jacksonville.

Their restaurant draws on the everybody-knows-everybody air of small-town Swansboro, even though many of their customers are out-of-towners.

“We meet some very, very, very interesting people,” Egan says. “We live where everybody else vacations. When those people come in the door, we want them to feel welcome.”

Mallory Parker, who has tended bar and served tables at the restaurant since it opened, drives the 35 minutes daily from Jacksonville to Swansboro. “That was one of the wonderful things — how beautiful it is and how happy people were to be here,” she says. “Everybody knows everybody, and I know them, too.”

She felt a quick, lasting connection when she met Pierce and Egan. “I realized these people were special,” she continues. “They’ve been at the bottom, and they’ve worked their way up. They know what it’s like to be in our shoes, so they treat us with understanding.”

Pierce and Egan, who live with their dogs in a loft above the restaurant, have become part of Swansboro’s civic structure. They work with other restaurant owners in the historic district. If one of the businesses runs low on ice or sugar, they share. Egan joined the Rotary Club; Pierce serves on the board of the Swansboro Area Development Foundation.

“The older we get, the more appreciation we have for what a wonderful community this is,” Egan says. “It’s awesome when your friends want to come and hang out where you work.”

Plus, when things don’t flow smoothly, all that water provides ready respite. “If you have a stressful day,” Pierce says, “you just hop in your boat and go far enough away that you can see if the restaurant is on fire, and then you come back. A little saltwater cures everybody.”