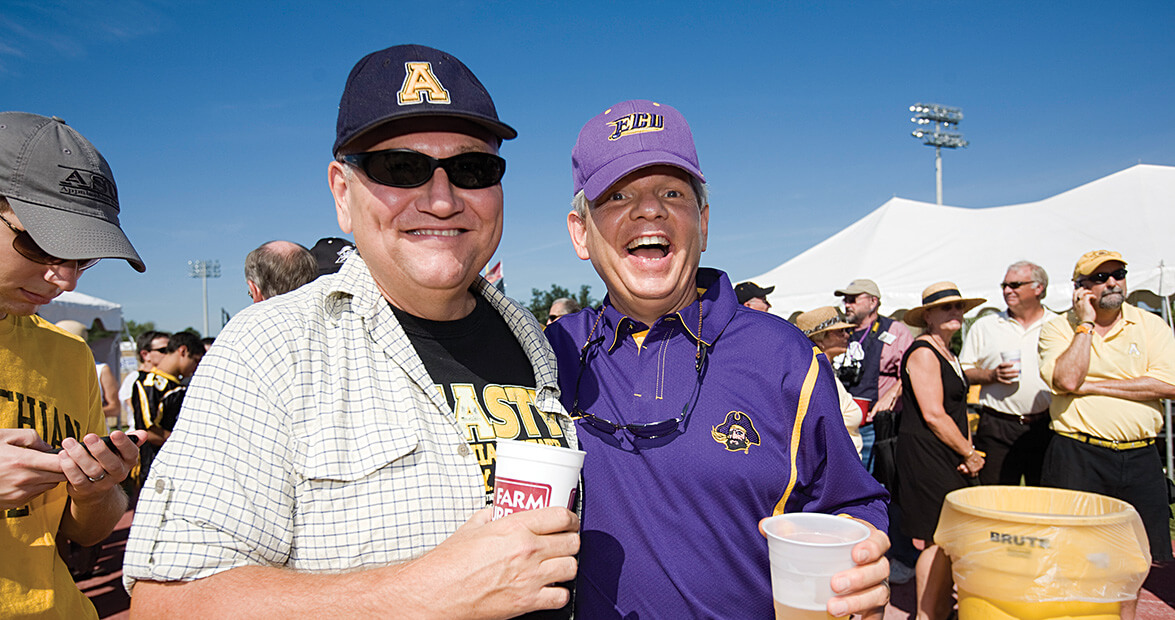 EDITOR’S NOTE: This story was originally published in the September 2014 issue of Our State.

You hear the tailgate before you can smell it. Somebody’s got the pregame on the radio, or maybe a CD of highlights from that championship season. In the distance, over by the stadium, the marching band tunes up.

You smell the tailgate before you can see it. Meat over fire pulls you toward it like the current of a river. The smoke works its way into the weave of your clothes. Days later, doing laundry, you’ll smell it and smile.

You see the tailgate before you can touch it. There’s a field of parked cars and fold-out tables and kids running pass patterns on the grass. Party tents and camp chairs. School flags flying.

You touch the tailgate before you can taste it. You hug your tailgate neighbors — people who feel like brothers and sisters, even though you might see them only on these six or seven days a year.

Then you taste it.

Burgers and hot dogs off the grill. Potato salad made with Duke’s and kept on ice until feeding time. Deviled eggs and ham biscuits and a salad that barely gets touched. If you’re ambitious and got up early, ribs in a smoker. Or maybe just an aluminum tray of pulled pork from that joint on the way into town.

Sweet tea and lemonade. Beer from the bottom of the cooler, so cold it’s got flecks of ice in it.

This is how it’s done on Saturdays in the fall across this great state of ours. The tailgates spread wide outside the big stadiums at UNC and Duke and State, at ECU and App State and Wake. But fans also commune at the smaller schools — Elizabeth City State and Elon, Johnson C. Smith and Davidson, N.C. Central and Western Carolina.

Sometimes the football is good, sometimes it’s not.

But you can always win the tailgate. 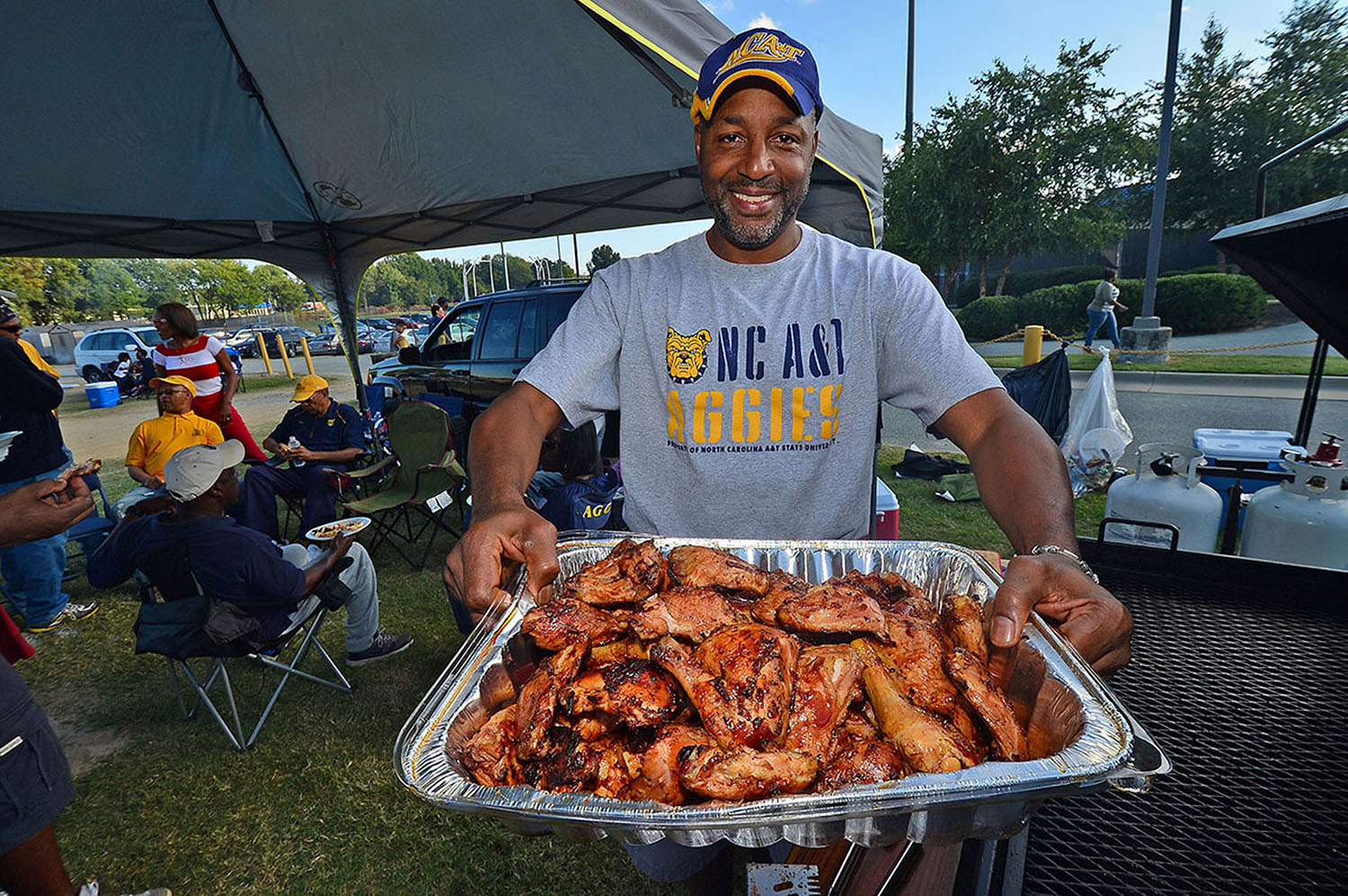 Pregame parties are about friendship. That means a Pirate can be pals with a Mountaineer, and an Aggie cook will almost always invite his neighbor to try a taste. photograph by Charles E. Watkins/University Photography

You might know people who blow it out — linen tablecloths, real wine glasses, silverware. This can be fun, in the same way it’s fun to put on a suit instead of spending Friday night in sweatpants. But tailgating doesn’t have to be a big production. As I believe Bear Bryant once said, wherever two or three gather in the name of football, it’s a tailgate. Doesn’t matter if all you have is a bucket of chicken and a six-pack. Tailgating is a big tent. All are welcome. Even fans of the other team.

Why do we do it? Well, it’s fun. The food’s a lot better outside the stadium than in. (At some places, a damp hot dog is about the best you can hope for.) It’s a relatively calm place to catch up — once the game starts, everybody’s cheering or booing or yelling at the refs.

But there’s more to it than that.

Tailgating is communion. It’s a way to honor our common bonds as members of the Tar Heel Church (or whatever denomination you prefer). Football, like church, gives people a shared identity — it’s one way we sort the world to find others like us, and one way we figure out who we are.

Tailgating is homecoming. It gathers together people who might otherwise never see one another, and it deposits them in a place that’s meaningful to all of them. An afternoon on the campus lawn, and senior citizens feel like sophomores again.

These Saturday afternoons stack up over time and blend together into something richer and deeper, like that 15-layer cake your grandma used to make. I’ve tailgated countless times outside stadiums from here to California, but I don’t have many sharp memories from 30 years of tailgating life. It’s just a warm wash of time well spent.

The games don’t matter. The people matter. It’s hard these days to find the time and space to sit down and spend time with people you care about. But that’s exactly what a tailgate is for.