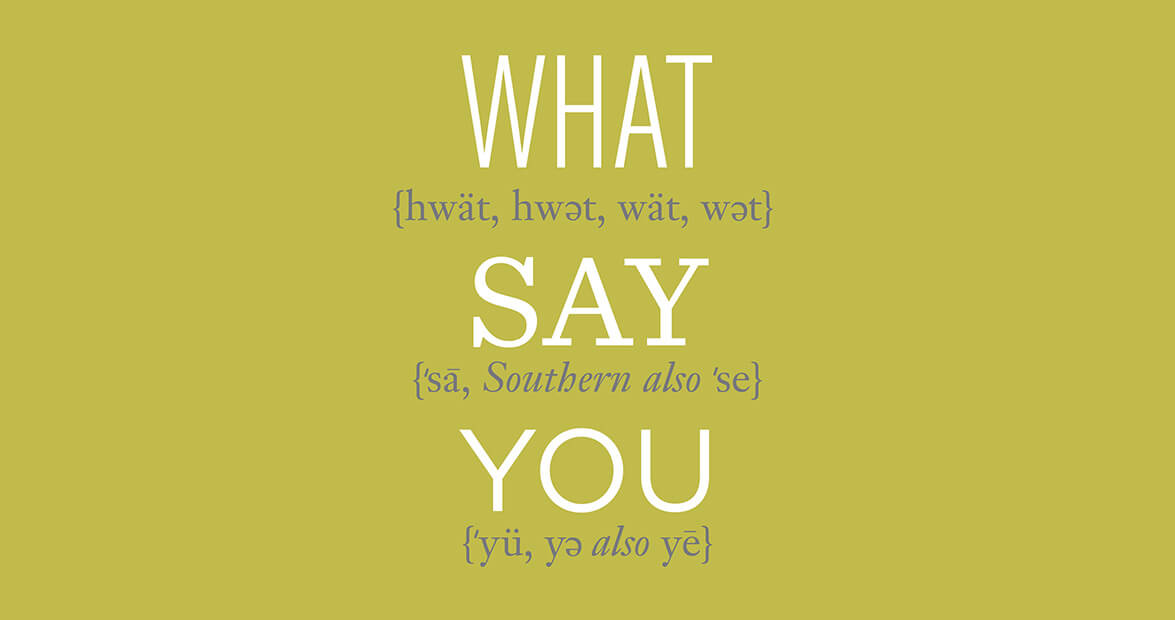 Pediatricians and psychologists and a passel of other “-ishans” and “-ists” routinely offer this advice to new parents: Talk to your baby. The mandate stems, perhaps, from the cautionary tale of a king who decreed that no one should utter a single word to his infant son. In this way, the king reasoned, when the boy eventually spoke, the world’s original language would be revealed. A logical supposition. Except that, instead, the poor little prince just gave up, withered away, and died.

That’s died as in dide.

Writing about a Southern accent is an assignment fraught with contradictions. There’s a reason the South is famed for its oral tradition: We talk. We talk a lot. But talk doesn’t always translate easily to the written page. And if you’ve ever read (or, let’s face it, been required to read) The Adventures of Huckleberry Finn, or even Gone With the Wind, you know just how difficult, even tiring, it is to read dialect. Clearly, Mark Twain and Margaret Mitchell wrote before the existence of MFA creative writing programs, whose professors frown mightily on dialect-driven prose. Here be dragons, and so forth. So let’s get it out of our systems now. Herewith, a brief primer in speaking basic North Carolinaese, meant to be read aloud for optimal effect.

Friends is pronounced frenz. We’re frenly folks, which, by the way, rhymes with yokes.

Wouldn’t sounds like wooden. And there’s no “s,” no silken sibilant sss in “isn’t” or “doesn’t.”  Everyone knows that. It’s idden and dudden.

Naked is pronounced nekkid. Admit it: Nekkid makes you feel better about yourself naked than the word naked does.

We want as in don’t, as in, “I don’t want your Bermuda grass growing in my fescue.” However, we also wunna side of fries, and then wunna runna race to be healthy, during which an idear might hit us like a tunna bricks if we’re not innerupted.

Ruin rhymes with urn, though in some past tense situations, rurnt is appropriate. As in, “You’ve plain rurnt that dog.” Pie crusts and peonies can be rurnt as well.

Picking rhymes with chicken, not ring. As do tellin and drivin and eatin and knittin and cookin and weedin and workin, or as Scarlett O’Hara famously discovered with her rurnt hands in that Atlanta jail, “Wantin ain’t gettin.”

When it’s not detrimental, exposing one to scorn (Henry Higgins melodically notes in My Fair Lady, “An Englishman’s way of speaking absolutely classifies him.  The moment he speaks, he makes some other Englishman despise him”), an accent is a useful thing. My accent landed me a job during my Northern experience on Nantucket Island. The no-nonsense, steely-eyed proprietress of The Tail of a Whale gift shop hired me solely on the basis of my drawl. “Customers like the softness, the slowness,” she said. Minutes later, I was behind the counter, schlepping scrimshaw and quahog-shell jewelry.

One speculates about the etymology of “drawl.” Wouldn’t it seem that the word derived logically, organically, from “draw (out)” and “y’all”? Scholars, however, claim “drawl” descends from the Icelandic dralla, meaning “to linger, loiter.” Yes. We linger in our language.

In their book Talkin’ Tar Heel, Walt Wolfram and Jeffrey Reaser dissect North Carolina dialects, all 200 of them. Its scholar-authors’ years of research and 3,000 interviews provide cultural, social, regional, and ethnic background for our enduring (or stubborn) habits of speaking. As accurately as the origins of an accent can be historically or factually traced, ours can be attributed, like gospel and blues, corn bread and chess pie, and a plethora — I mean passel — of other good stuff, to African-Americans of several centuries ago. The language of slave quarters, pronunciations and cadences, were naturally carried into plantation nurseries and kitchens, to blend and eventually merge with other predominant dialects of Scotch-Irish and quasi-British, becoming that which survives today as a Southern accent. The one my children seem to have willfully, determinedly abandoned, unlike myself.

I was literally taught an accent at the kitchen table. Though born in Greensboro, one adopts what one hears, (see the king story on previous page), and I spent those formative, learning-to-talk years in Larchmont, New York, while my father worked in the city at a Burlington Industries office like the one portrayed on “Mad Men.” (I hope not.) We returned to North Carolina when I was five, and I have vivid memories — vivid as the purple grape jelly my mother stirred into the grits to persuade me to eat them — of my father coaching (and coaxing) me every morning before kindergarten: “Say ‘school.’ Skool. Not ‘school’ like jew-el.” (Of course, later he had to work just as hard — the chickens coming home to roost, so to speak — to cure me of saying Keerlina for Carolina, and cain’t hardly. It wudden thuh cain’t part of it; it wuz the double negative part of it. Be keerful whut you wish for.)

Though I’m capable of eloquent redneck if necessary, an accent is not about speaking Li’l Abner hick. There’s a difference between strong accent and poor usage: Them thar chickens dun come home to roost. You set yer hiney down rat tar and strang this messa bains I done pict. “Noooooo,” as Ange would say to Opie.

And while on that topic, let us count on one hand the movie stars who get it right. Kyle Chandler as Coach Taylor on “Friday Night Lights.” Sissy Spacek as Loretta Lynn in Coal Miner’s Daughter. The English perform Southern accents better than others, it’s been opined. Their vowels are already stretched, their consonants shortened. As for the rest of you actors and actresses, voice coaches and directors, lissen: We don’t say shore enough.  We say sure, just like you do. We don’t say gonna, no matter how many writers who live in Laurel Canyon spell it that way in a script. We say gunna. As in, “I’m gunna snatch you ballheddid.” In fact, as frequently as we say gunna, we say Imon, as in “Next time Imon order the fried green tomato B.L.T. instead of the tuna.”

We do not say gwine.

But then, I’m no stranger to scolding. My New York agent once said to me, “Never, ever again send an email to me that opens with ‘Hey, Rhoda.’ ”  Why the vehemence? I wondered. “Because that’s how we call taxi drivers who ignore us,” she said, “and call out deli workers who skimp on the pastrami. It’s derogatory, equivalent to ‘Hey, you!’” Well, we use “hey” for that purpose, too, and so what? Sheesh. Next time, get the fried green tomato B.L.T. instead of pastrami.

A friend who left Rocky Mount for Denver, Colorado, more than 30 years ago has worried aloud to me that she fears losing her Southern accent. “You have,” I brutally informed her. “No, no,” she contradicted.  “Because I still say oyl for oil.” Oyl.

Again with the puzzlement. “How else is there to say it?”

It was my turn to laugh. Who talks like that? You don’t pronounce the “l.” And not like Tom Brokaw can’t pronounce his “l’s.” You say oil, or shrimp boil, or tinfoil, with just the slightest touch of the back of your tongue, where the warty taste buds are, to the top of your throat — not the roof of your mouth. Try it: That durn copperhead was in a coil on the stoop. “Goooooood,” as Ange would say to Opie.

Still, the non-Southern “Oy” is a constant in my vernacular. After all, my father was in apparel and textiles and New York, and one adopts what one hears.

Go ahead, then. Defy the king’s decree. Talk to the babies in your life. Chatter to your children. Natter to your neighbors. Discuss and debate and gossip with your coworkers and teammates. Drop those “-g’s” and “-ings” and “-eds.” Talk especially to the people who talk differently than we do. Talk long enough and eventually, they’ll surely adopt — or succumb — and speak with an accent. One that we can unnerstan.