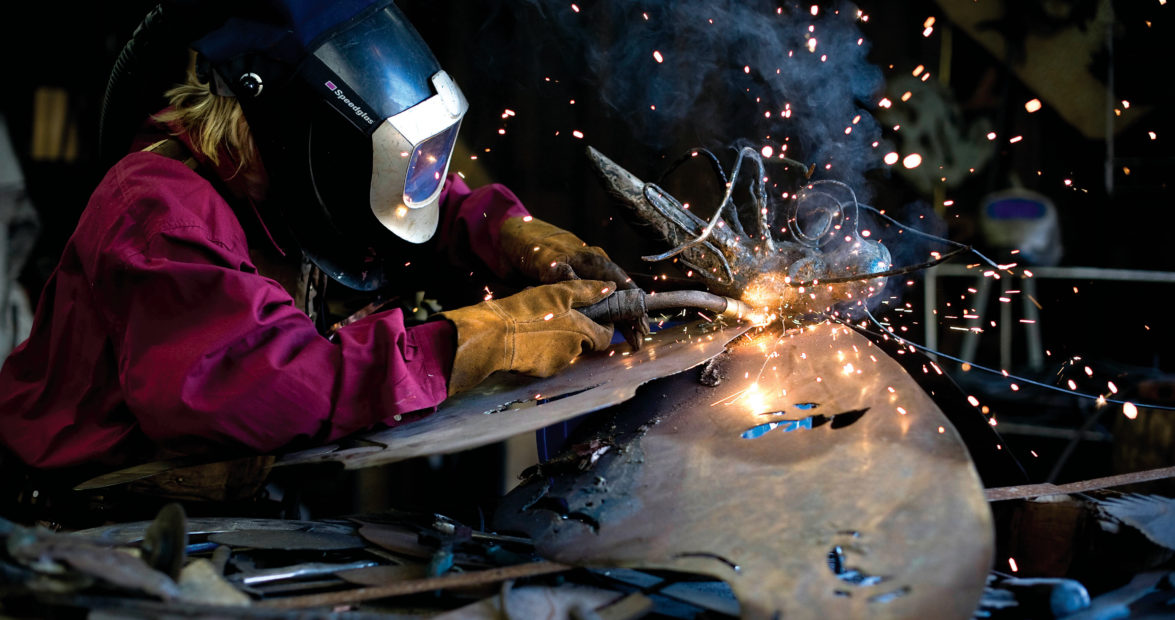 EDITOR’S NOTE: This story was originally published in April 2010.

You’ll find Walker Service Station at the corner of Depot Street and Branner Avenue in the artsy western North Carolina town of Waynesville. A red-roofed building with open bays revealing a line of cars jacked up like grasshoppers, it’s one of those spots you pledge to remember the next time your car won’t start.

But there’s something more than car repairs going on here. A metal butterfly swings next to a metal fish, taking up an entire front window. Climbing metal leaves and vines besiege a corner of the building. Out back, towering metal flowers with fiery petals nod in the sunshine.

This corner — the domain of metal artist Grace Cathey and her husband, Clayton — is an exercise in surprising contrasts. Inside the station, timing belts share space with sculptures of spiky trees. Here, customers waiting for car repairs sit among copper- and brass-finished leaves and fish.

The service-station-turned-artist’s-gallery is certainly hard to miss, agrees Grace, the artist who produced the metal decor. It makes it hard to forget, too. “People say, ‘How did you stage all that?’” she says, laughing. “I say, ‘It’s the real thing.’”

Once you get to know Grace — a whirlwind of a woman who can barely sit long enough to talk about the nearly 15 years it’s taken to develop her nature-inspired sculptures — it’s not surprising. Clayton’s grandfather started Walker Service Station in 1928, and Grace has slowly taken over a corner here, a window there. Her sculptures now fill most of the windows, the entire waiting room, and the curbs outside the station. “We try to make it look like a fun place to be,” she says.

Finding and creating fun isn’t difficult for Grace. She and Clayton, along with their children, Emilie and Turner, take twice-a-year trips to do everything from surfing in Costa Rica to biking the Netherlands. Both avid pilots, Grace and Clayton regularly fly their small plane around the Southeast. Grace grew up in rural San Antonio, Florida, with a father in the propane business and a mother who sewed, painted, and cooked. The fifth of seven children, Grace says her outgoing, entrepreneurial spirit developed at a young age. “I’m real showy because I needed a lot of attention,” she says.

She dabbled in the arts as a child, embroidering butterflies on her jeans as a teenager, crocheting rugs and scarves, playing with salt dough. “At a young age in my 20s, I really had an obsessive passion to create,” she says. When she found herself seduced by western North Carolina’s mountains, she came to Waynesville to stay and began thinking of incorporating art into her career.

She found the professional crafts program at Haywood Community College and enrolled in the fiber arts program, where she learned to weave. She spent time at her loom, layering colors and textures, and doing her own dyeing and sewing.

Fifteen years passed before she decided to take a welding class at the school. That, it turned out, changed everything. “I didn’t go to make a career change,” she reflects. “I just went to make a few Christmas gifts for friends and family that year.”

But change she did. She sold her looms and fell in love with welding torches. And in 1995, she enrolled in the college’s welding program. It was around then, she says, that she started considering herself an artist. “I like to push and move and go, because to me, it’s the journey,” she says.

The move, though, makes sense. “I just treat the metal like I was sewing,” she says. Her metal techniques include a lot of layering, too, which give her wall hangings and smaller sculptures a 3-D effect. She uses copper and brass finishes to give her pieces a deep patina, but also adds automotive paints for bright pops of color. “I like the layering of colors,” she says.

Her work is again changing and growing. In love with large-scale sculptures, she’s applying her work to public arts efforts that place her pieces in streetscapes, museums, collections, and parks across the country. In 2007, her 4-foot-tall, 12-foot-long, 400-pound yellow, petal-heavy dahlia spent six months at an exhibit at the United States Botanic Garden in Washington, D.C. Her 15-foot-tall apple tree takes root along Main Street in Hendersonville, and a sculpture depicting the life cycle of the butterfly was at the North Carolina Arboretum in Asheville. In 2008, she created a Plott Hound ornament that hung on the White House Christmas tree. “I like to get out there,” she says of her artwork, which has even been featured on the HGTV cable network. “I like to consider myself a site-specific artist,” she says. “I like to feel the space and see what they need.”

That’s what administrators at Chimney Rock State Park discovered when they learned about Grace’s work, says General Manager Mary Jaeger-Gale. They knew immediately that her work would fit right into the park’s concept and environment. “She set the bar for what we wanted to do,” Jaeger-Gale says. So park administrators worked with Grace to develop sculptural concepts along the trail, which opened in 2004.

Today, the wooded trail, which is geared toward children and families, features eight of Grace’s sculptures along its meandering walk. There’s a metal toad, a metal spider dangling from a metal web, metal salamanders, and butterflies. For hikers, seeing the sculptures “gives them a sense of wow!” Jaeger-Gale says.

“We really wanted to make the trail interactive,” she says. “We wanted to show our guests how crafts can be used in the environment. Grace’s ideas were really helpful in helping us achieve that goal. We connected with her and her art. We feel like we hit a major find when we met Grace.”

Others likely feel the same way, with her work finding spots in homes, gardens, and public spaces across the country and locales as far away as Greece. And as Grace develops new techniques and ways to express her passion for North Carolina’s mountains, her work is sure to find its way to other corners of the globe, if not a street corner in the nearest town. Both are fine with her.

“I was born with a passion to create, with a love of people,” Grace says. “I’m always on the hunt for new ideas.”