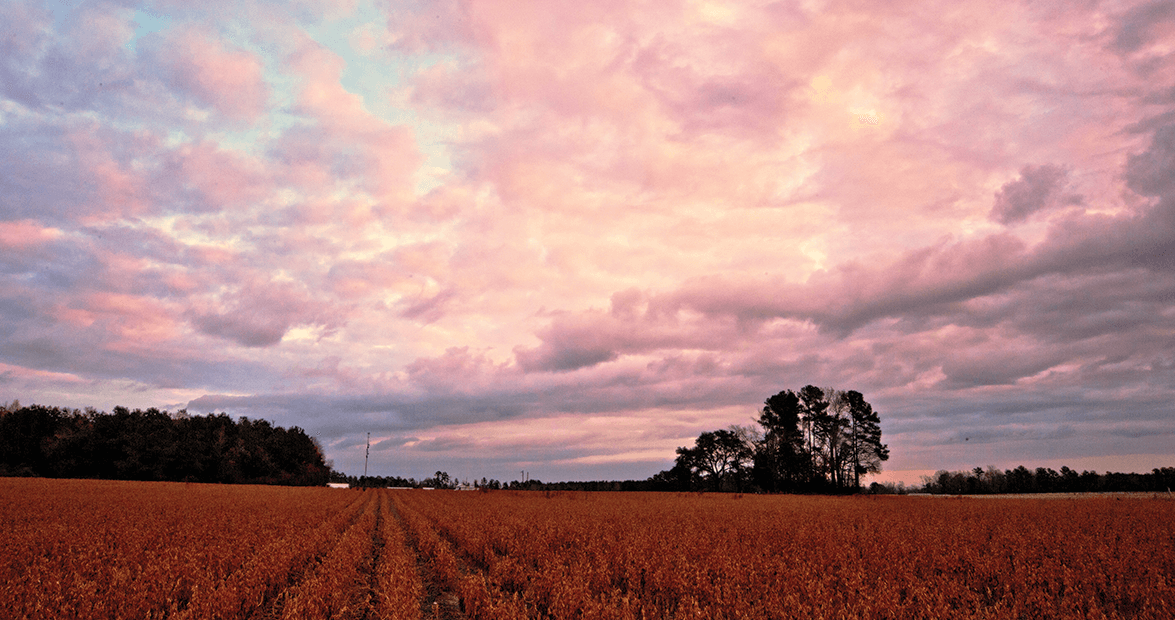 The theory that the earth is in fact round — first suggested by some ancient Greek and proven, they claim, by Magellan — seemed as ridiculous to me at age 8 as it must have seemed to those who first heard it. I grew up in the Coastal Plain, in a town 157 feet above sea level. If, down in Clinton, you were looking for elevation, you’d best search for an anthill.

My family lived a couple of miles outside of town, in a ranch house across the street from two farms. In the summer, the view from the plate-glass window in our living room was of a field of tobacco, just waiting to be cropped and suckered, and, in winter, of a ravaged stretch of stalk. The farm just to the left, also visible from the window, was planted with corn. Corn grew much higher than tobacco and after harvest left an even more ungainly stubble. Though there were woods at the far end of each field — and behind those woods, swampland — the line of pines might as well have been in Duplin County, so far away across the denuded earth did they appear.

There was, for me, an epicenter of flatness: a field just to the left of our house. We always called it the Beaunit Field. Beaunit was the name of the textile firm that operated the factory that owned the field, though by 2001, Beaunit, along with most of the other textile concerns in our area, moved its production to points foreign and given to cheaper wages and fewer taxes. Between the plant and our house, separated by a thin row of pines and a sandy two track, was the field. I am no good at estimating acreage, and like most people with subpar math skills, I measure distance in terms of gridirons. But here football fields did not apply. In memory the field is the size of Great Smoky Mountains National Park — infinite, endless, nearly uncrossable. A three-day journey by stagecoach, two weeks by foot. I was 6 when I first encountered it, 18 when I last stood in it, and of all the clichés of childhood, the adage that everything from your past is smaller when revisited in adulthood is certainly true of the Beaunit Field.

But memory is not about truth. In truth, the field was not that remarkable. That it was free of produce, tobacco, or corn made it invisible to the mostly farmers and sharecroppers who traveled back and forth on Seven Bridges Road. Often it went unmown for months, and the grass could reach head-high before some maintenance man from the plant bushhogged it back to stubble. Its single characteristic, other than its mythic-in-my-memory expansiveness, was its flatness.

Seeing as how man, since the origin of the species, has adapted both work and play to the landscape he inhabits, flatness was required of the things we did there. These things evolved as we grew older and our interests shifted. When we first encountered the field, it was the perfect place, when the grass was high, to play hide-and-seek. Later, if mown, it was suitable for throwing a football or improvising bases out of purloined place mats and getting in a game of softball. When my friends down at the intersection all got minibikes, it became a racetrack. Out of all the boys in the neighborhood gang, I was the only one who did not own a minibike, though honestly I never wanted one. Even though I would learn later to drive in that field, careening around the edges in the last-leg Galaxie 500 my father bought for the last three of us still in high school to share (my most prominent memory of this car was going on a first date with a girl who said she was a little chilly and who seemed even chillier after I pulled a wrench from under the seat and cranked up the heat, the knobs on everything that could be turned on or off long since lost), I did not like to see my field corrupted by anything with a motor. To me it was sacred, to be explored only on foot.

During the jogging craze that swept the country in the mid-’70s, my mother, who has always been athletic, took to exercising in the field in the late afternoons after she got home from her job at the community college. I can’t imagine what the neighbors thought at the sight of her power walking the perimeter, her arms flying as high as her shoulders with each footfall. I am sure she did not use the tracks carved by the minibikes, as my mother has always been known to cut her own path. When, during the Watergate scandal, my mother heard on the nightly news that, despite his blatant violations, Nixon’s approval rating had not significantly dropped, she got up from the supper table to call the White House to try and lower his approval rating. I am sure it never bothered her to be thought of as odd for turning a field into a place to get in her after-work laps. Due to its size and its flatness, the field was perfect for her power walking, drive-by gawkers be damned.

The most exciting thing that ever happened in the Beaunit Field was the convening of the Tuscarora Council of the Boy Scouts for their annual jamboree. Though the council comprised troops from only the southeastern counties, it seemed to us that all the Boy Scouts in the state had descended upon our field. Everywhere were tents and elaborate rope bridges and totem poles and tarps strung from bamboo poles. My older sister, then in high school, must have had advance warning, as she and two of her friends joined the Explorer branch of the Scouts and got their photo in the paper for breaking the gender barrier. (When, while writing this, I asked her why she joined, she said she and her friends wanted to participate, rather than view the jamboree from the sidelines. I am wise enough now not to ask her what she meant by “participate.”) By late Sunday afternoon the field was cleared, but for weeks the remnants of campfires — burnt patches of grass, charred logs — scarred my refuge.

From the day we moved into our house until the time, 12 years later, when I left for college, the field was my place. All of us had, in childhood, our secret places where we went to be alone with our confusion and desire, to escape — or attempt to escape — the often intolerable oppression of adolescence. Most people I have queried on this subject prefer cover: closets, attics, basements, haylofts, sheds, pop-up campers. I’ve never considered myself claustrophobic, but I have always favored open spaces in which to hide.

I spent part of my freshman year in high school in Black Mountain, high in the Blue Ridge, and one of the things I missed most was my field. And yet — true to the contradictory desires that claim us in our teens — when I was in the Beaunit Field, I did not want to be there. Already, at age 16, I wanted out. I wanted to travel the country, to see and experience the vastness beyond the field. I thought my life was limited by my surroundings; I thought, like many a restless teenager, that living Down East, in a county where, I would learn years later from NPR, the number of hogs exceeded the number of humans, would not define — or for heaven’s sake, refine — but only confine me.

Just beyond my field, partially hidden by the factory, was the highway. Interstate 40 at that time was just a proposal on a page. U.S. Route 421 was the quickest way for travelers from the Triangle and the Triad to reach the mainland beaches. There were trucks galore, and I would lie in the field and listen to their coarse gear grinding. On holiday weekends the thrum of traffic was audible, and I was keenly conscious of what lay beyond the field: bright lights, big cities, beautiful women, Baltimore — and I am just up to the B’s.

But of course I wasn’t going anywhere until I graduated, so I stuck to my field, the perfect space to dream of elsewhere, of the future. When you are young you lack experience, but experience of course cannot be rushed without consequence. What is far more lacking, and more important, is perspective. Everything that happened to me, at home or at school, seemed dramatic, and the nascent fiction writer in me tended to make it melodramatic. It was only in that field — flat and invisible to everyone but me — that I felt I could see beyond the moment at hand.

Growing up, the beauty of eastern North Carolina — its unchecked wild greenness in summer, the beautiful bleakness of what passed for winter — was lost on me. It took me a decade at least to appreciate the sandy two tracks leading off into the pines; the abandoned tobacco barns, made of logs chinked with flaking concrete, surrendering to kudzu and wisteria in the middle of barren fields; the slow, black rivers disrupted by the roots of giant cypress trees.

But in the Beaunit Field, I understand, always if innately, the wideness of the vista Down East. My understanding of it was so specific to that field, so associated with and colored by desire, that I failed to extend it beyond the ditches that bordered it. My favorite time to be there was night. If the grass was high, I’d part it with my hands and trample a path deep in its middle and sit for hours, sometimes sneaking a cigarette, contemplating what lay above and ahead. I listened to the chirp of crickets and to the throaty deceleration of the tractor-trailers stopping for gas or a pack of Nabs at one of the corner stores down at the intersection. Where were they headed? Would I ever travel beyond the mountain cottage where we spent two weeks in summer or the Topsail Island rental where we went when we could afford it? Answers sometimes came to me, as if the grass surrounding me were moving my dreams with the tips of blades, guiding my desire not across the flat terrain, but straight up into the sky, so huge and alive with planet and star.