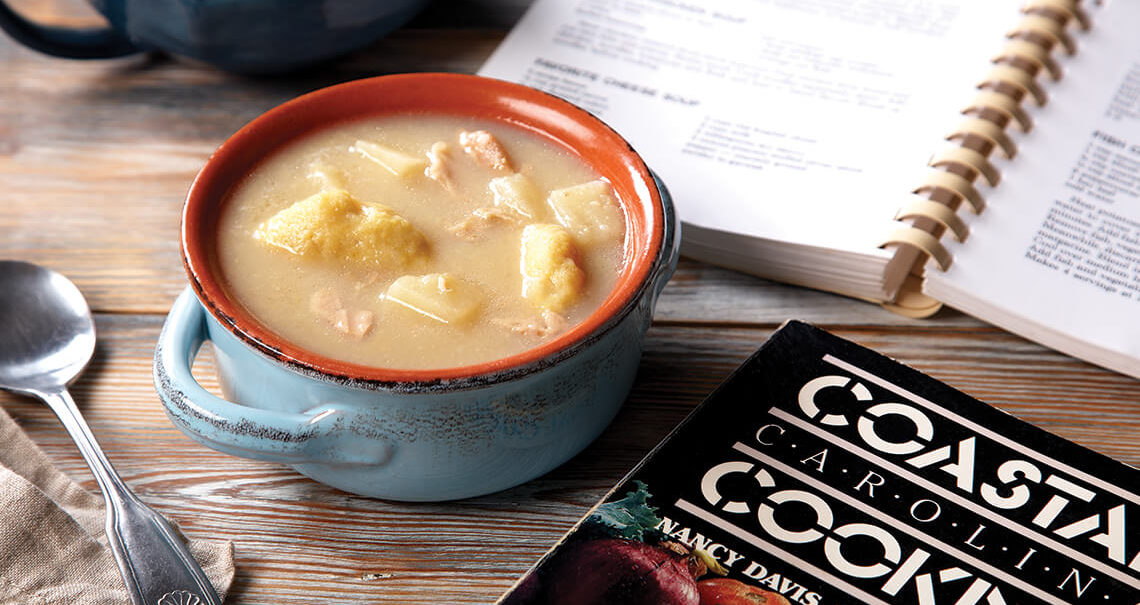 People love to say they read cookbooks like novels. Not me, though. I read them like anthropology books. Like history books. Like atlases, and, sometimes, like actual road maps. At this point in my life, I don’t need cookbooks to teach me how to cook. I’ve been a home cook, food writer, and newspaper food editor for most of the past 40 years. Stand me in a kitchen in front of a stove with pretty much any ingredient and I’ll figure out how to use it.

I don’t need cookbooks to tell me what to cook, either — thanks to Google, cooking newsletters, and friends on social media, I have more “want to try” recipes than I’ll be able to make in several lifetimes. What I need my cookbooks to do is show me the way to understanding: how something was cooked, why it was cooked, and, most importantly, who cooked it.

That’s why the cookbooks I treasure are the splatter-stained ones, the ones with age-brown pages and local folks’ names under the recipes. My shelves are packed with these personal and practical volumes: community cookbooks, church cookbooks, and Junior League productions.

Which cookbook can tell me the importance of drum, another name for channel bass, on the Outer Banks? That would be the tiny Original Ocracoke Cook Book, published decades ago by the United Methodist Women. Within this slim volume, there are seven recipes for drum — stewed, creamed, boiled with potatoes, fried, baked, and smothered. It’s like the Waffle House hash browns of fish. When I want to understand the connection between ginger cake and Moravian sugar cake, the late Beth Tartan’s classic North Carolina & Old Salem Cookery comes to my rescue. And is it true that no one cooked with garlic in the 1950s? Not according to the 1951 edition of The Southern Cook Book by Burlington’s Marion Brown. The hors d’oeuvre chapter alone practically reeks.

When I left my newsroom job last year and came home to work on my own as a writer, I did some serious cookbook culling. But there are a dozen or so I will never part with, the ones I grab when an editor asks if I’ve ever heard of tomato pudding or what to do with cornmeal dumplings. In part, I hang on to these books because they would be hard to replace — you’d have to search used bookstores or online book sites to find some of them. But mostly, I keep them close at hand because they’ve fed generations of North Carolinians and have given me countless memorable meals.

With help from UNC’s Sea Grant Program, Davis and Hart put together this unusual book by finding 34 home cooks, from Maple to Holden Beach, to share stories about growing up in isolated coastal communities and the food, made from local ingredients, that they ate. Focused on people and places, the recipes are a jumble, grouped by communities instead of types of dishes. Recipes cover things you won’t find in other cookbooks: bear roast, molasses pie, and collards with Irish potatoes. Seafood abounds, of course. If it swims, crawls, or lives in a shell along our coast, it will turn up somewhere in these pages.

From the cookbook: clam chowder with cornmeal dumplings recipe. 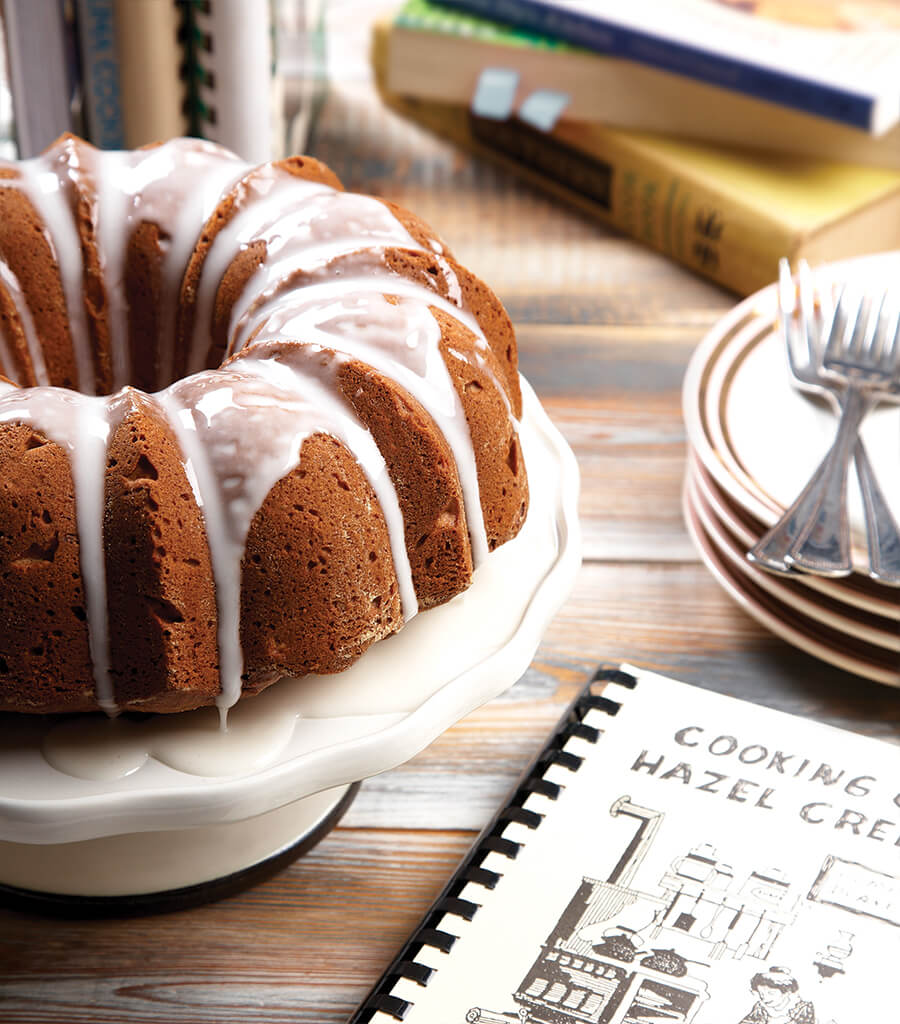 A traditional mountain ingredient gets its just “desserts” in Apple Butter Poundcake from Cooking on Hazel Creek by Duane Oliver. photograph by Matt Hulsman

Cooking on Hazel Creek: The Best of Southern Mountain Cooking

Duane Oliver’s book is a very simple project — it even looks like it was hand-typed, with plenty of little typos. But no less an expert than Ronni Lundy, author of the James Beard Award-winning Victuals: an Appalachian Journey, with Recipes, recommended it to me. Hazel Creek, near Fontana Lake, disappeared in 1944, when the people who lived there were moved out to make way for the Great Smoky Mountain National Park. Oliver grew up there and has written several books about the area. His cookbook covers the food of Cherokee families in a few fascinating pages, then concentrates on local recipes in the 19th and early 20th centuries. Some of the recipes are newer, with convenience products creeping in. But the older ones are a trove of things like gritted bread, made only in late summer when corn is starting to dry on the cob, and “Poor Do,” fried leftover cornbread.

published by the United Methodist Women  of Ocracoke

If you stumble upon a copy, you may think there’s been a mistake: Originally published in the early 1960s, this booklet is only two dozen pages, with no introduction, explanation, or index. Like Ocracokers themselves, it doesn’t rely on frills, but it’s filled with gems, like fig cake, a favorite on the island. The original publication has a green cover; there’s an edition from the 1980s with a yellow cover. If you can’t find either, locals are also fond of Café Atlantic Cook Book by Ruth Toth, which was reissued in 2015. An original hardcover version in new condition recently appeared on Amazon for $973.90. That’s a lot of drum and figs.

Elizabeth Hedgecock Sparks, a k a Beth Tartan, was the food editor of the Winston-Salem Journal for 44 years, part of North Carolina’s “homemaker triumvirate,” along with Helen Moore of The Charlotte Observer and Betty Feezor of WBTV. Before she died in 1992, Tartan traveled all over the state to chase down North Carolina foodways. Her book is remarkably detailed, with an extensive section on how things were cooked — whether in a fireplace or on wood-burning stove, for instance — as well as a valuable section on Moravian food and history. The recipes touch on all eras and pretty much every vegetable, fruit, or edible critter that turns up within our borders.

Council never claimed her cooking was anything fancy — she called herself a “dump” cook who threw things together. But folks flocked to her acclaimed Chapel Hill restaurant. Even legendary food writer for The New York Times, Craig Claiborne, who encouraged her to write down recipes. Her first book is a solid collection of country cooking, including chitlins two ways — fried and boiled — and her famous fried chicken. My favorite recipe, though, is the one on the last page, for a child’s birthday party. Ingredients: balloons, thank-you gift, cake, and ice cream. With eight children, she had a lot of practice.

In the pantheon of Southern cookbook authors, Marion Brown isn’t a household name. A journalist and radio personality, she lived in Burlington, where she caught the recipe-collecting bug after helping her Episcopal Church Woman’s Auxiliary put together a small cookbook. She ended up collecting thousands of recipes, from all over North Carolina and beyond. Her cookbook is still valued by Southern culinarians as one of the earliest regional cookbooks, capturing a time when Southern food was becoming a bit more cosmopolitan after World War II. The 1968 edition was revised to include simpler recipes, but the 1951 original is a fascinating collection of how North Carolinians cooked, including chicken baked in scuppernong wine and baked beans from the Nu Wray Inn in Burnsville.

Charlotte’s Betty Feezor was the queen of the North Carolina TV cooks from the 1950s until her untimely death, from cancer, in 1978. People have told me that when they were latchkey kids, they’d turn on Betty’s show, which aired until 1977 across the Carolinas on WBTV, when they got home from school because it was like having their mothers there. For years, Feezor’s spiral-bound books were almost impossible to find. My two copies, Volumes I and III, were gifts from readers at The Charlotte Observer, and I treasure them: They’re time capsules of 1950s home ways, right down to the salad chapter, where one of the only things green is lime gelatin. These days, they show up on Amazon and eBay: A recent check found an unused copy of Volume II for $570.98. Betty would approve if you went for the thriftier used copies, which run from $12 to $80, depending on condition.

We certainly don’t lack for talented chefs and food writers in North Carolina, and their cookbooks have helped spread the secrets of our culinary traditions far and wide. These notable titles deserve a space in every cookbook collection:

Bill Neal’s Southern Cooking (UNC Press, 1985)
Bill Neal wasn’t a native of Chapel Hill, but he started two restaurants that shaped it, La Residence and Crooks Corner. When his first book came out, it changed the Southern food landscape, allowing it to be seen as cuisine, not a national punchline. Neal died in 1991, but he left us a legacy of respect for our food.

Victuals: An Appalachian Journey, With Recipes
by Ronni Lundy (Clarkson Potter, 2016)
Like mountain ranges, Lundy’s book crosses borders a few times, but it covers North Carolina’s Blue Ridge extensively, a deep dive into the culture and foodways that honors the past but focuses on life there today.

Seasoned in the South: Recipes from Crook’s Corner and from Home
by Bill Smith (Algonquin Books, 2005)
When Bill Smith took over the kitchen at Crook’s after the death of founding chef Bill Neal, our state gained one of its great chefs and characters. His recipes cover the best of Crook’s (yeah, Green Tabasco Chicken) and from his own life — from New Bern to France.

Deep Run Roots: Stories and Recipes from My Corner of the South
by Vivian Howard (Little, Brown and Company, 2016)
We’re so lucky that her corner of the South includes our corner, the Down East portion of North Carolina. Besides being a crazy-good chef and beloved TV host, Howard proves she has talent with words, too. She’s brought respect to rural pockets of the state that deserve attention.

The New Southern Garden Cookbook
by Sheri Castle (UNC Press, 2011)
If you shop locally and seasonally, you need to keep Castle’s book handy. She covers fruits and vegetables with a definite Southern bent, and her recipes are approachable by any experience level.

Savor the South cookbook series from UNC Press
When you dig into the best books of the South, you can’t miss the influence of Chapel Hill’s respected university press. This series of 24 small cookbooks, the brainchild of editor Elaine Maisner, focuses on the ingredients and food occasions of the South in a particularly handy formula – explanations and history, along with about 50 recipes. They aren’t all written by North Carolinians, but a majority of them are. (Full disclosure: I wrote two books in the series, on pecans and bourbon.)