As a child spending sweltering summer days on the island of Cyprus, Andia Xouris longed for rose-flavored ice cream. Decades later, when she and her husband, George, decided to start an ice cream business, rose pistachio was one of the first flavors she mastered. Much to their surprise, it became one of their best sellers. The Xourises both grew up among Greek relatives for whom family was everything — and ice cream was important to George, too: His beloved grandfather worked at a coffee shop with an old-fashioned ice cream counter when he arrived in New York from Greece. “When we sat down at the kitchen table as a family to talk about really doing this, we realized, ‘Oh my gosh, wait a minute — George’s grandfather’s ice cream scoop is right there in the drawer,’” Andia says. “It gave us all goosebumps, and we were so excited and honored to carry on the family business. It was just so incredibly inspiring.” And while their ice cream often inspires road trips from Winston-Salem, Fayetteville, and beyond, it’s the milkshakes, piled high with locally made mini cupcakes, cookies, torched marshmallows, and whipped cream that are posted all over social media. Today, the Xouris’s daughter, Alyssa, and son, Alex, work for Andia’s as director of retail operations and director of merchandising, respectively, and George’s pappou’s heirloom ice cream scoop hangs on the wall in their original Cary shop in honor of the Xourises’ past, their future, and, always, their family. 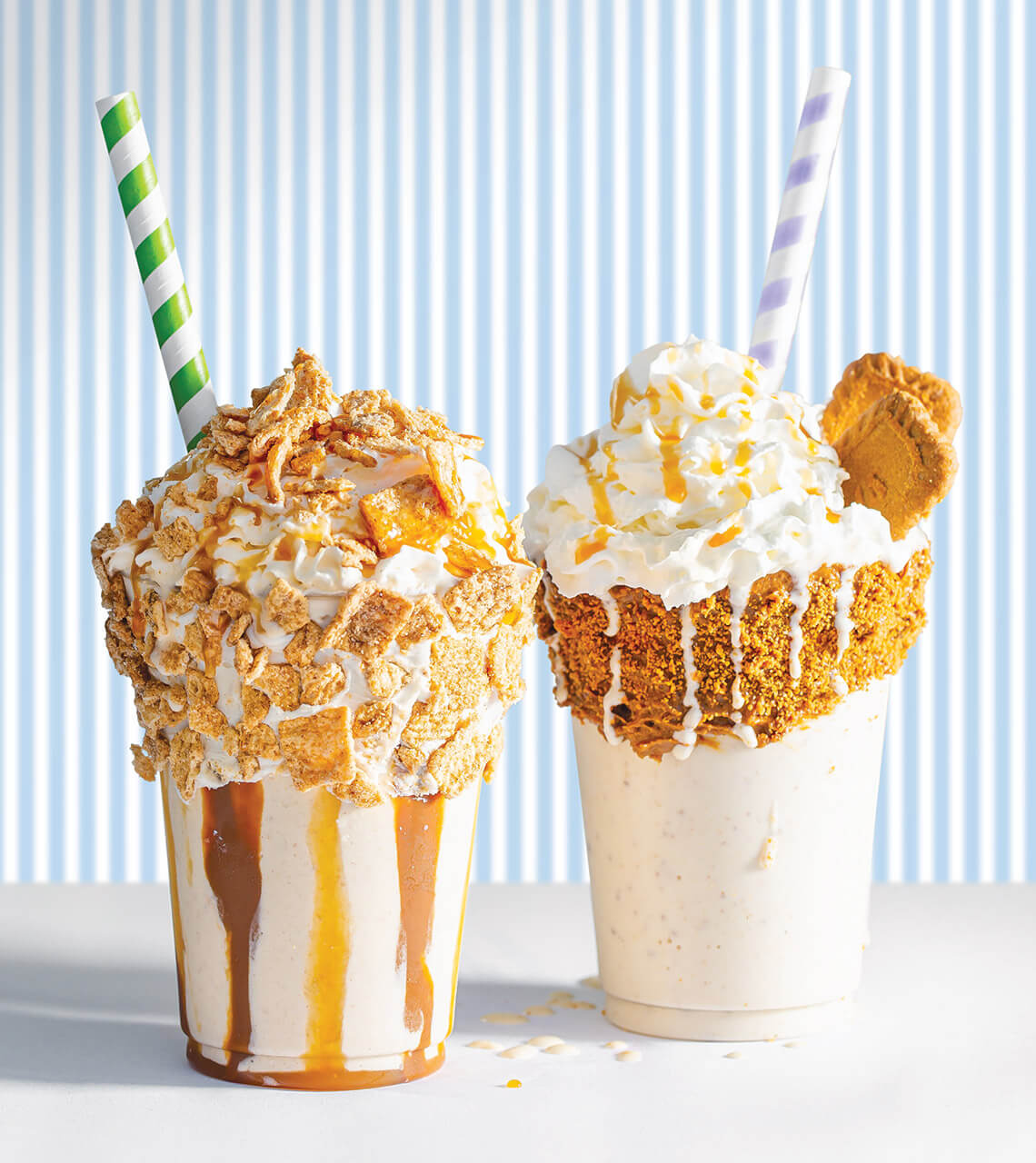 It’s not unusual to hear something like applause rise from the line at Asheville Sandwich Company’s walk-up window in West Asheville. “In the beginning, it was like being on a red carpet,” owner Kevin Mullins says with a laugh. “Every time we’d bring a milkshake out, it was like, ‘Ahhh!’” When Mullins and his wife, Cheri, started serving milkshakes in 2020, he spent weeks dreaming up flavors like Fruity Pebbles and cinnamon dulce de leche. Today, visitors stand in line for creative shakes topped with homemade vanilla, strawberry, and Nutella whipped cream, and for “bubble waffles”: waffles made with a custard dough that have crispy-on-the-outside, soft-on-the-inside dough bubbles. “If you want to blow people’s minds, the milkshake has to look amazing but taste even better,” Mullins says. “That first taste is everything; you need a ‘wow’ moment — otherwise, it’s just ice cream.” 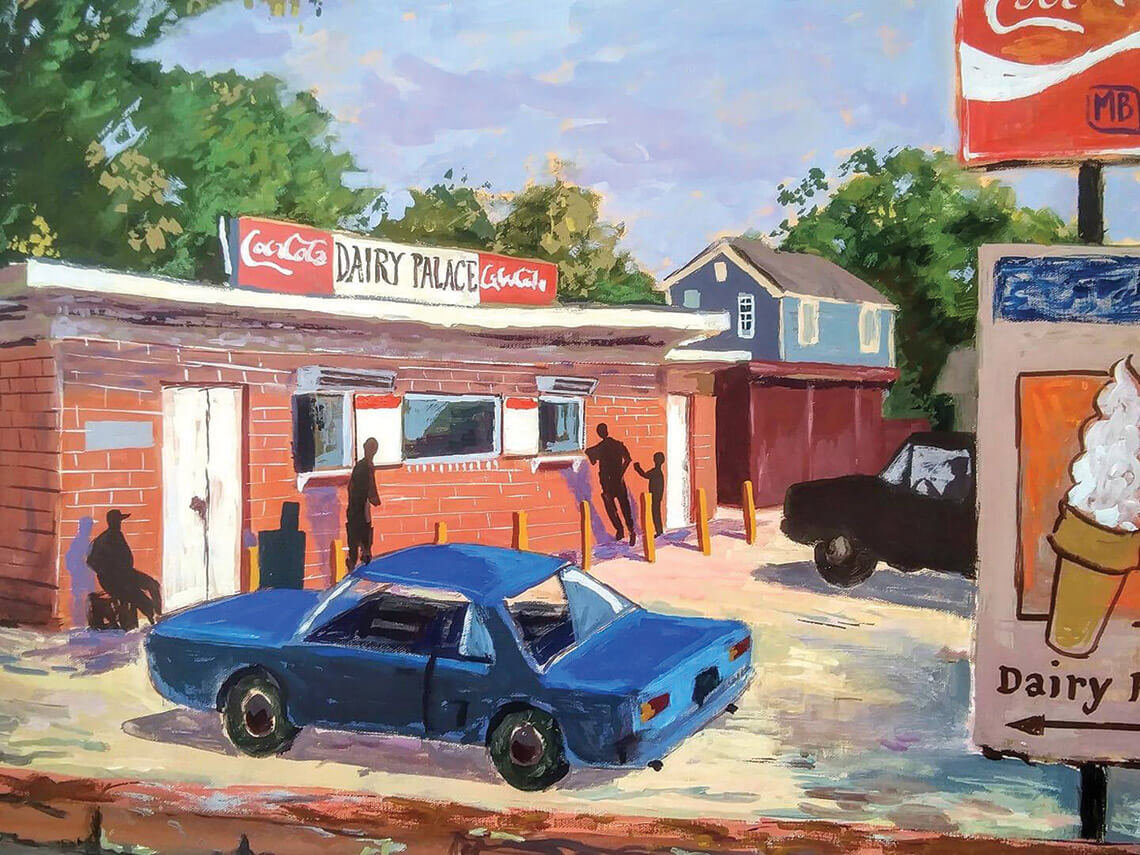 After Hurricane Florence displaced artist Mark Brown from his Ocracoke home, the Dairy Palace gave him a free meal. Brown repaid the favor with a painting of the Washington landmark. painting by Mark Brown

Pull up to the Washington waterfront, tie up your boat, towel off the kids, and strap on your sandals for a quick walk. On Bridge Street, a block from the Pamlico River, is a walk-up window that holds the promise of flat-top cheeseburgers and creamy milkshakes. Since Tim Evans bought the Dairy Palace in 1986, it’s been a beacon for locals — including fishing folk and police officers, who know to stop in at the crack of dawn for hot coffee and fresh breakfast sandwiches — as well as seasonal boaters in search of summertime bliss. Each milkshake begins with a base of soft-serve chocolate or vanilla ice cream from Simply Natural Creamery in nearby Ayden, which is mixed with caramel, butterscotch, or hot fudge, or fresh ingredients like strawberries, cherries, and bananas. And while Tim’s son, Nathan, has rallied his dad to make a few changes around the Dairy Palace, like using local ice cream, adding Oreo and Reese’s to their milkshake flavors, and getting a card reader after decades of accepting cash only, the restaurant remains frozen in time in the best possible way. The Dairy Palace may look like a ’60s-era concession stand, but the milkshakes are fit for royalty.

The man had driven more than an hour down NC Highway 12, a cooler riding shotgun, for a milkshake from John’s. Well, about eight milkshakes. His family back on Hatteras Island had sent him to Kitty Hawk on a mission. Since 1977, John’s Drive In has been an Outer Banks tradition for vacationers who dream of dolphin boats and milkshakes for most of the year — and make their dreams a reality each summer. Owners Chelsea Jordan, who grew up visiting the beach stand, and Jason Jordan, a longtime chef in the area, vowed to keep that tradition alive when they bought John’s in 2020. “With the milkshakes, it’s all about fresh ingredients — and the consistency,” Chelsea says. “We train our staff to make them the same way every time: They’re thick but should still be able to come through the straw; if they’re too thin, it’s not the same experience.” And if you don’t have an entire cooler to fill with flavors, don’t fret. Just try the top seller (and Chelsea’s favorite): chocolate peanut butter banana. 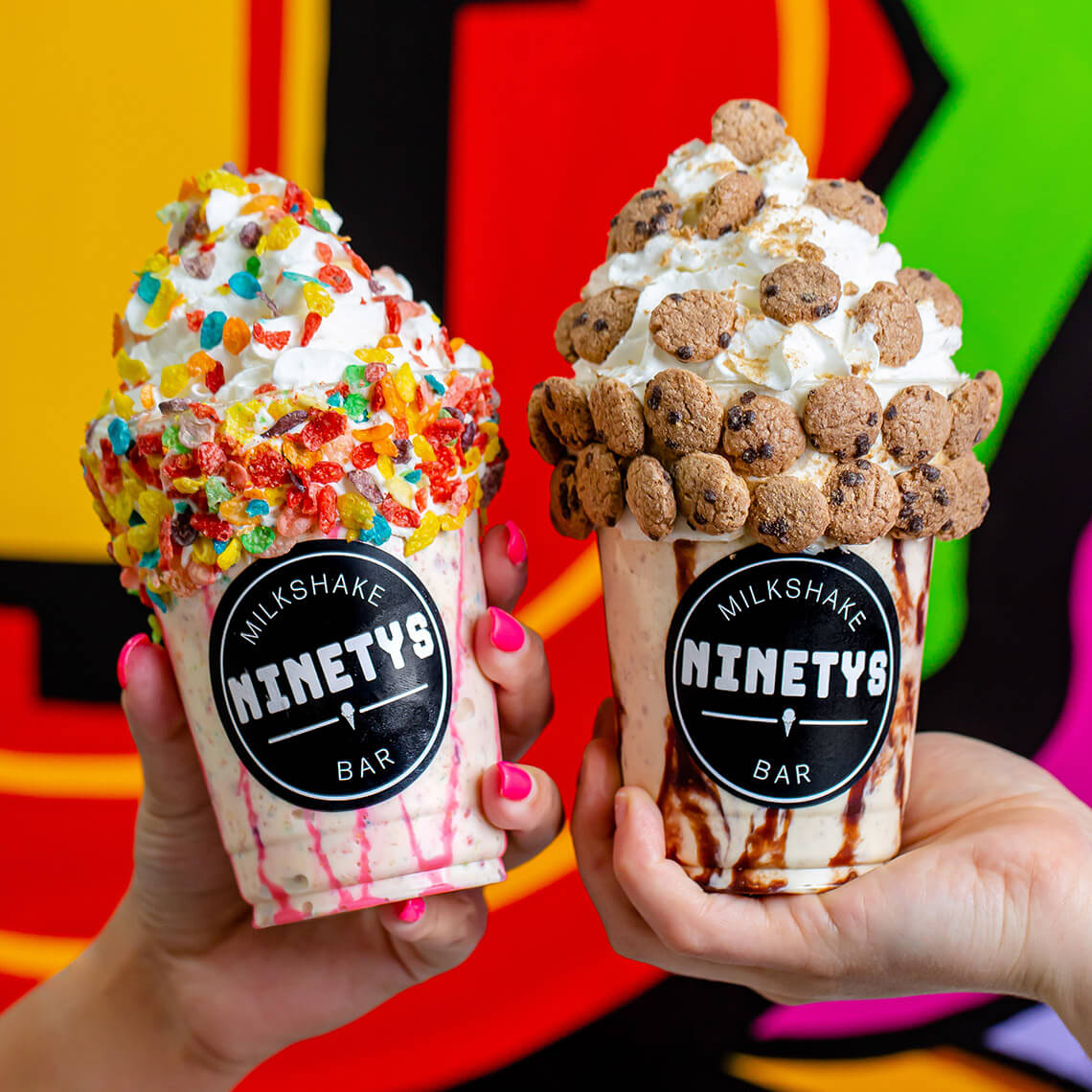 At Ninety’s Milkshakes, try The Bottom of the Cereal Bowl milkshake: vanilla ice cream, condensed milk, and your choice of cereal — mixed in and sprinkled on top of a pile of whipped cream. photograph by Tim Robison

As a kid, hardly anything beat watching Saturday morning cartoons while eating an outrageously oversized bowl of cereal. Except maybe ice cream for breakfast. So in 2017, when Darith Ngear took over the Charlotte sandwich and ice cream shop that his mom, Srear, had run for 12 years, he decided to go all in on nostalgia. “My mom is a Cambodian immigrant, and it was her dream to open a shop when she got to America. I wanted to keep it going, but I also wanted to do something new,” Ngear says. “I wanted to take my childhood growing up in the ’90s and relive it — and if you’re going to relive your childhood, you’ve got to have sugary cereal.” At Ninety’s Milkshake Bar, that comes in the form of a super creamy milkshake called The Bottom of the Cereal Bowl: vanilla ice cream, condensed milk, and your choice of cereal mixed in and sprinkled on top of a mountain of whipped cream. Favorites include Cinnamon Toast Crunch, Fruity Pebbles, Lucky Charms, and Cookie Crisp. Milkshakes featuring the flavors of other classic childhood treats — like Dunkaroos, Strawberry Shortcake bars, and Drumstick ice cream cones — are also popular. But even before they order, former ’90s kids begin to grin when they see the shop’s paintings of cartoon characters from shows like Rugrats, Hey Arnold!, and Dexter’s Laboratory. “As you grow up and become an adult, you have new responsibilities, but at Ninety’s, we go back to simpler times,” Ngear says. “We want to make kids feel at home, and adults feel like kids again.”

Related: Our summertime bucket list of 13 sweet spots — a scooper’s dozen! — has something for everyone.