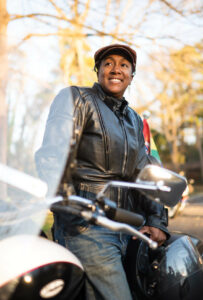 The author’s newest bike is a Kawasaki cruiser featuring amenities that make long-distance riding more practical and comfortable: a windshield, saddlebags, and seats that lean back. photograph by Jamey Price

The garage door groans as it slowly rises, letting warm air and sunshine into the cool, dark space. The light reflects off my two babies — a Suzuki sportbike and a Kawasaki cruiser smooshed together amid storage bins and empty coolers like lovers who’ve been spooning during winter hibernation. A pair of brown suede chaps drapes over a bin. Black mesh summer riding pants sit on a shelf next to a blue-and-white full-face helmet that matches the Suzuki and a matte black one that goes with the Kawasaki. The reality of springtime settles around the bikes and me. It’s time to ride.

We head east on Albemarle Road to get out of Charlotte — me on my Kawasaki and my girlfriend, Randi, on her deep purple Harley-Davidson Softtail. Traffic light after traffic light, grocery stores and fast-food joints disappear in our chrome-encased rearview mirrors. Subdivisions with names like Grove Hall give way to long stretches of roadway lined with towering maples and oaks. I exhale and roll on the throttle of my cruiser, barreling down what eventually turns into NC Highway 218. Randi powers ahead of me on her Harley, her ponytail flapping in the wind.

I’ve been riding motorcycles since 1997 and teaching people how to ride since 2002. Some years I ride more than others, and 2020 was one of those “more than others” years. When the world shut down during the Summer of Covid, Randi and I hit the back roads of North Carolina every chance we got. The goal was to put in as many miles as we could in order for me to build the stamina needed to ride to Ohio in July. That’s when Randi’s motorcycle club, Women in the Wind, would be hosting its annual international conference.

I started out riding sportbikes. They aren’t comfortable like cruisers, but when you’re young and invincible, comfort doesn’t matter. I was all about speed. The handlebars on sportbikes are low, forcing you to lean over the tank, which puts pressure on your shoulders and wrists. By 2020, I was rarely riding my sportbike for more than an hour or so. Truthfully, before that summer, I barely rode at all. But after meeting Randi in the fall of 2019 and hearing about her cross-country trips, I decided to buy a cruiser so that we could ride together. That’s how I ended up with Punisher, the Kawasaki that now shares garage space with my old Suzuki. 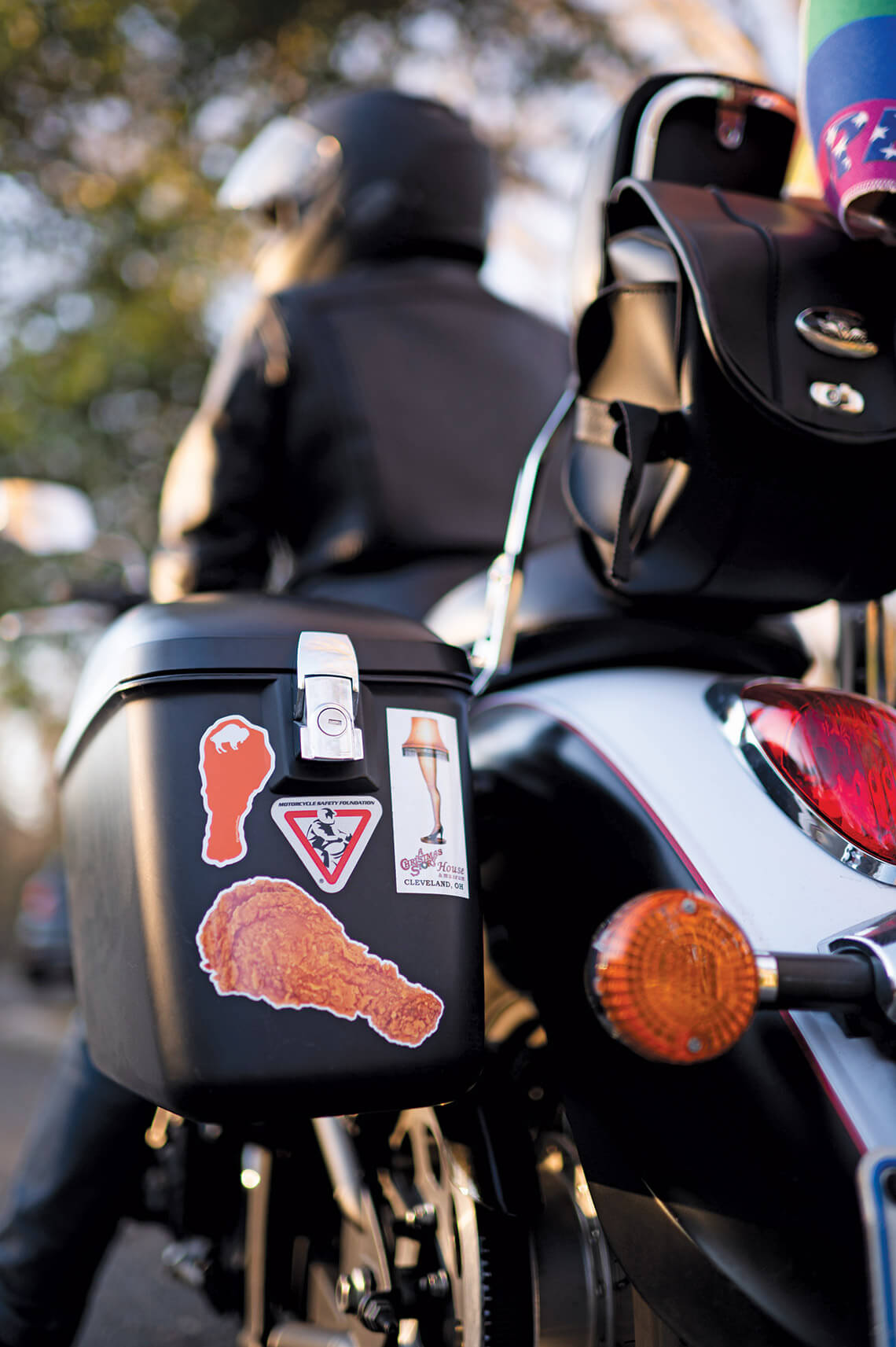 Each stop along the author’s journeys means a new saddlebag sticker to mark the different places she’s been. photograph by Jamey Price

I tried to sell the sportbike after I bought Punisher, but I got cold feet minutes before a buyer came to get it. Punisher isn’t as fast as the Suzuki, but she’s more reliable. I look at the stickers on her hard plastic saddlebags, and they tell the story of our summer rides: There’s the one shaped like a fried chicken drumstick, the holographic sticker from the Pro Football Hall of Fame, and the lamp sticker from our visit to the house in Cleveland, Ohio, where A Christmas Story was filmed.

There’s the sticker from the Pickle Barrel bar and grill in Chattanooga, which marked my progression that summer to doing six-hour rides in a day. Taking the back roads from one fried chicken joint to the next — following “The Great” Carolina Fried Chicken Map (yes, it exists) — taught me to enjoy cruising rather than flying on a sportbike. These days, I prefer easing around curves at a leisurely 45 miles per hour to zipping around the white-knuckle-inducing switchbacks of the Blue Ridge Mountains.

My earlier affinity for sportbikes always made me a bit of an oddball as a motorcycle instructor. Most of the other teachers — often middle-aged men — ride big touring bikes or cruisers. When I first started, I was one of the younger instructors and one of few women. That’s why I began teaching in the first place: A coworker’s husband had told me that the state-run program needed more instructors, especially women.

When I teach now, I can see how much my presence eases female students’ fears. I remember how nerve-racking it was when I first took the class. The male instructors treated the course like a rite of passage. During one exercise, we were supposed to ride fast enough to slam on the rear brake and skid the rear tire. The goal was to teach us how to keep the handlebars straight so we wouldn’t crash if we locked up the tire while riding on the street. I tried, but I couldn’t ride the bike fast enough to lock the tire. Thankfully, a female co-instructor was sympathetic and didn’t push me. “Women understand women better,” says Sara Richardville, who took the safety class several years ago and can relate to my situation. “Guys are just like, ‘Suck it up.’” 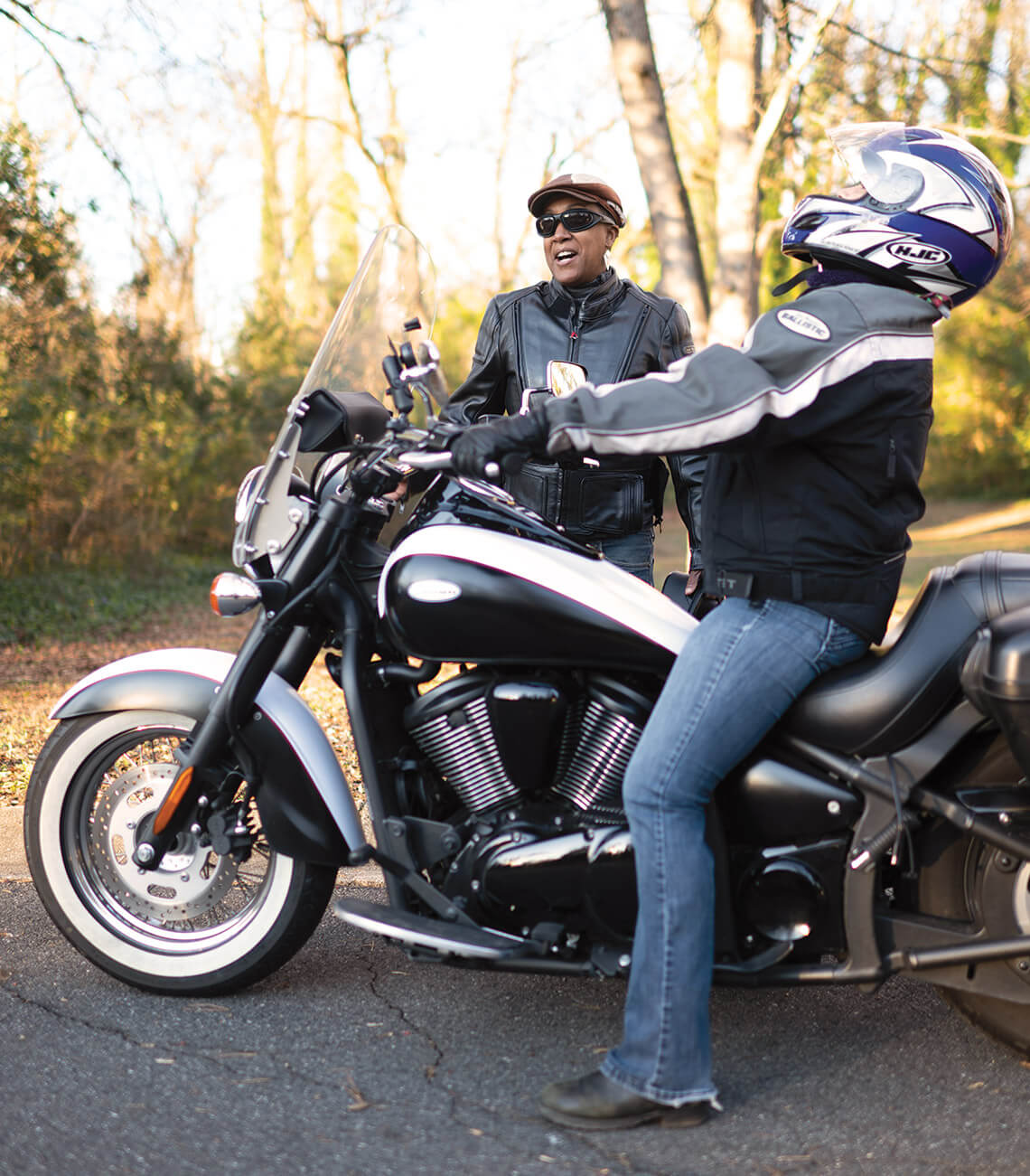 Tonya (left) shows Randi, a veteran rider, some of the tips that she gives to beginning students. Randi is sitting on Punisher, Tonya’s Kawasaki cruiser. photograph by Jamey Price

The basic motorcycle class curriculum is designed for beginners. It’s a combination of classroom and outdoor instruction on a closed parking lot. Within the first hour outside, novices learn to start the engine, ride across the lot, and stop the motorcycle — preferably without falling. Those are the most important exercises because they teach students to use their gearshift lever and clutch. Students also learn the importance of stopping with their handlebars straight so that the bike doesn’t tip over. Like bicycles, motorcycles need momentum to remain stable, but women often roll on and off the throttle because they get intimidated by the sound of the engine revving. That makes the bike wobbly. Male instructors tend to emphasize speed to correct the instability; I emphasize staying steady on the throttle to build confidence.

Nowadays, three-wheeled motorcycles are increasingly popular. Some come with two wheels in the front and one in the back and have automatic or semiautomatic transmissions. This eliminates fears of falling or of having to use a clutch to shift gears. My friend Kathleen Lamb took a class to learn how to ride her bumble-bee yellow semiautomatic Can-Am Spyder. She remembers how difficult it was at first to turn corners because the bike doesn’t lean like a two-wheeler does. To turn, she has to push one handlebar while pulling the other. “My shoulder was so sore for a while,” she says.

Fear of not being able to handle a motorcycle is one of the first hurdles that new riders, especially women, must overcome. Kathleen felt vulnerable out on the open road. “There was a lot of fear there: fear of other drivers, of not being seen,” she says. When Randi first took a motorcycle class, she was afraid that she wouldn’t be able to hold the bike up. And I remember worrying that I wouldn’t be strong enough to kick-start the bike like I saw guys do in the movies. I didn’t realize at the time that modern bikes have electric starters.

But each of us swallowed our fears.

I’ve always felt that, as women, we’re taught to be afraid — whether it’s fear for our personal safety, fear of not getting married, fear of not having children, or fear of not being a good mother. I see all of these as tactics, whether conscious or unconscious, that have been used to control us. But when we ride, we’re in control. What Kathleen feared is what makes motorcycling fun. Sure, part of it is speed, but a bigger part is freedom. It’s feeling the wind, noticing the purples and reds of the sunset. Riding on a country road on a beautiful day, Kathleen says, is “God’s time.”

The first time that Randi rode across the country on her bike, she was at a turning point in her life. She’d quit her job and sold her house. She needed a change. “It was a huge transition for me,” she says. “I was really open for the first time, and I didn’t know what the future held for me.” Her cross-country trip was a chance for her to thumb her nose at those who didn’t think that she was a real rider since she’d mostly stayed within the state of New York, where she lived at the time. That was in 2016, and she’s since made the cross-country trek two more times. “I always felt so passionate about riding,” she says. “I didn’t want to keep being looked at like I wasn’t a serious rider or a good rider.” 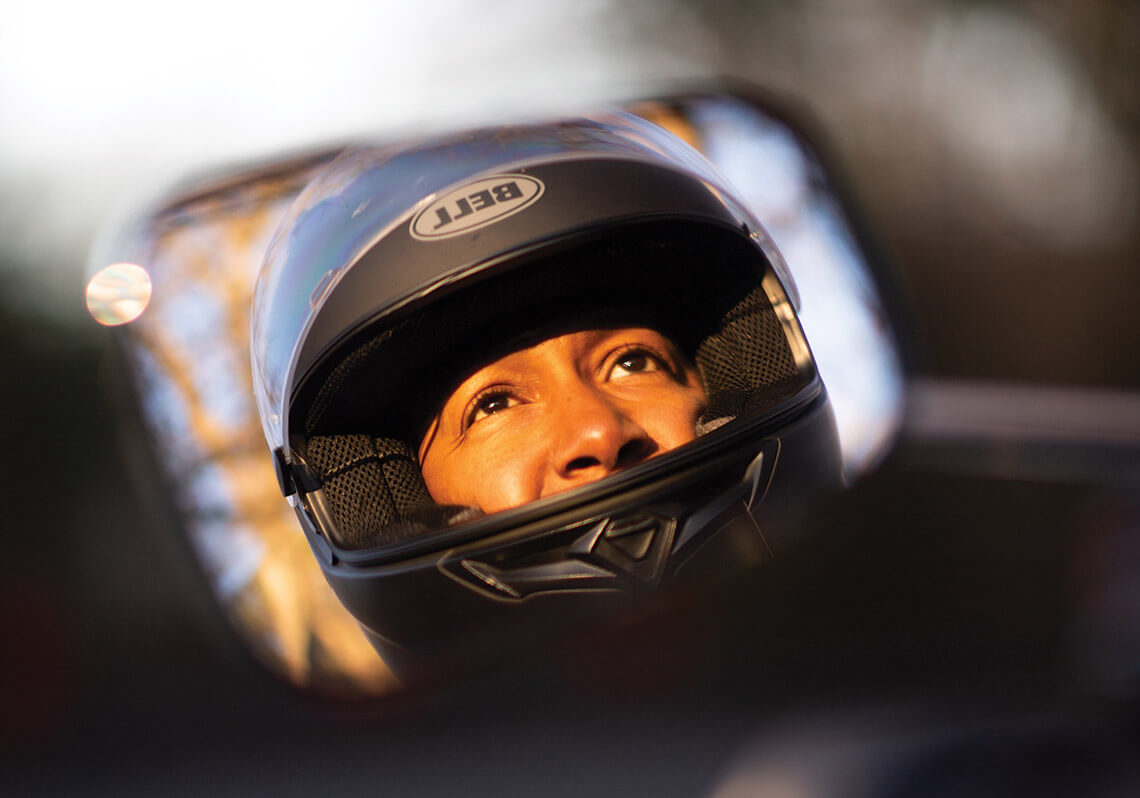 The reflection of the author in her rearview mirror brings to mind North Carolina singer James Taylor’s wistful “Sweet Baby James” and its famous line, “With 10 miles behind me and 10,000 more to go.” photograph by Jamey Price

Most of the women I’ve taught don’t necessarily aspire to ride across the country — at least not yet. But they do want control. Often, when women claim independence, it’s out of necessity, like leaving a toxic relationship or job. Riding a motorcycle isn’t something that we do out of necessity. “It’s empowering,” Randi says. “When I ride, I feel a different level of independence and power. When I’m riding with other women, it’s the best sense of unity that I get in life because I don’t do many things with other women.”

Sara Richardville decided to learn how to ride after spending so much time on the back of her husband’s bike. One day, she said to herself, “I want to ride in the front.” When she first started riding on her own, she’d take trips with her husband. But now, 14 years later, she’ll check the weather on a nice weekend and head out alone or meet up with other women riders.

Last summer, Sara rode from Sanford to Ohio to join her Women in the Wind sisters for a road trip to Maine. They traversed curves and hills, and survived rain showers; by the time she returned home, about 10 days later, she’d ridden a total of 3,200 miles. “We pretty much had done it all,” she says. “I felt very accomplished.” She laughs as she remembers the group of male bikers who stared at them at a gas station along the way.

I never longed to ride across the country or even up the East Coast, but I’ve always been drawn to motorcycles. They imply a kind of edginess that suits my personality. Riding still gives me fleeting moments when I feel invincible. Like when I merge my old sportbike onto Independence Boulevard from Briar Creek Road in Charlotte, where the on-ramp curves lazily to the right, then slopes downhill.

I look over my left shoulder to check for traffic. I roll off the throttle, squeeze the clutch, and shift into third gear. I roll back on the throttle and the Suzuki powers forward faster. The wind punches me in the throat. I crouch lower and keep rolling on the throttle. Then I stretch my legs farther back against the rear plastic fairings and press my chest closer against the tank so the wind rushes over my back — I’m flying.