Postmaster Angela Johnson pounds a rubber stamp repeatedly on a stack of Christmas cards that will be mailed all around the country. She’s done this more times than she can count — so many times, in fact, that the stamp’s knob is imprinted on the palm of her hand. Still, she smiles, because it’s not just any cancellation stamp that she’s putting on all those cards: It’s the limited-edition holiday postmark of Star. 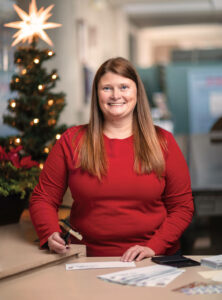 Since 2007, Postmaster Angela Johnson has been putting Star’s mark on cards that come through her small but spirited hometown. photograph by Jerry Wolford & Scott Muthersbaugh

Johnson grew up just outside of this tiny town in the center of the state, where the population is less than 900. She’s worked at the Star post office since 2007, and this year marks the 15th holiday cancellation that she’s presided over. “I think people like the idea of getting a card in the mail,” she says. “It’s something fun in the middle of a busy season.”

In 1987, Star was officially designated a Christmas Town by the United States Postal Service, joining a list that today includes dozens of towns with holiday-themed names — Santa Claus, Indiana; Bethlehem, Pennsylvania; Christmas, Florida; and even Evergreen and Faith, North Carolina — each with its own festive postmark. But Star’s stamp is distinctive in that it features a new design every year, chosen through an art contest.

The annual holiday postmark was the brainchild of Kay Brakefield, the postmaster in charge when Star was designated a Christmas Town. She got so many requests for the regular Star postmark, just because of the town’s name, that she decided to create a new one every year. “It’s become a tradition, something that I look forward to, and now it’s something that I associate with Christmastime,” Johnson says. “It brings Christmas alive for me.” 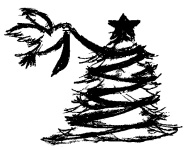 Star has always celebrated Christmas in a big way. Residents and visitors from around the Piedmont have been coming to the annual Christmas parade since 1955, making it one of the oldest in the state. Today, the Star Heritage Association and the Star Halcyon Women’s Club partner to sponsor the event, which includes the Miss Merry Christmas pageant, two Twinkle Toes footraces, and tours of local sites in the town’s historic district. The newest addition to the holiday festivities is the annual handblown glass ornament sale at STARworks, the art community housed in the historic Star school building. 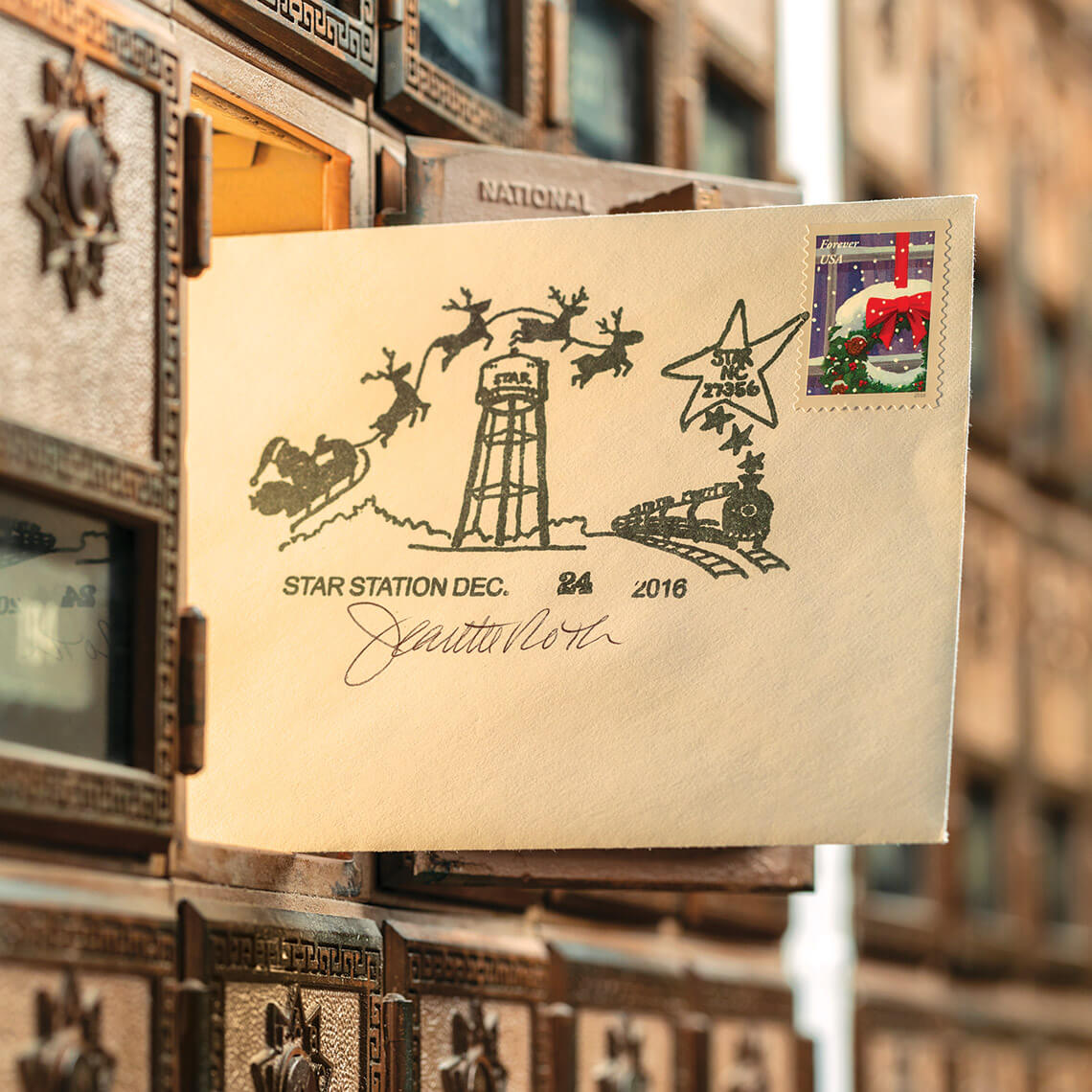 Stars are common elements in winning designs for the town’s postmark contest, like this 2016 stamp by Jeanette Roth. photograph by Jerry Wolford & Scott Muthersbaugh

The Christmas Town designation was more of a formality recognizing what residents have known all along: When it comes to Christmas, Star shines brightest. Post office patrons were excited to cast their votes in the first contest, and excitement over selecting each year’s winner continues to grow.

The rules of the contest are simple: The design can be no larger than 2 by 4 inches and must include the words “Star Station,” the month and year, and the town and zip code. Artists submit their designs from early September through early October. Entries are displayed in the post office, and patrons cast their votes by ballot. Johnson tallies the votes, and the winning design is announced in mid-October and made into the official cancellation stamp. 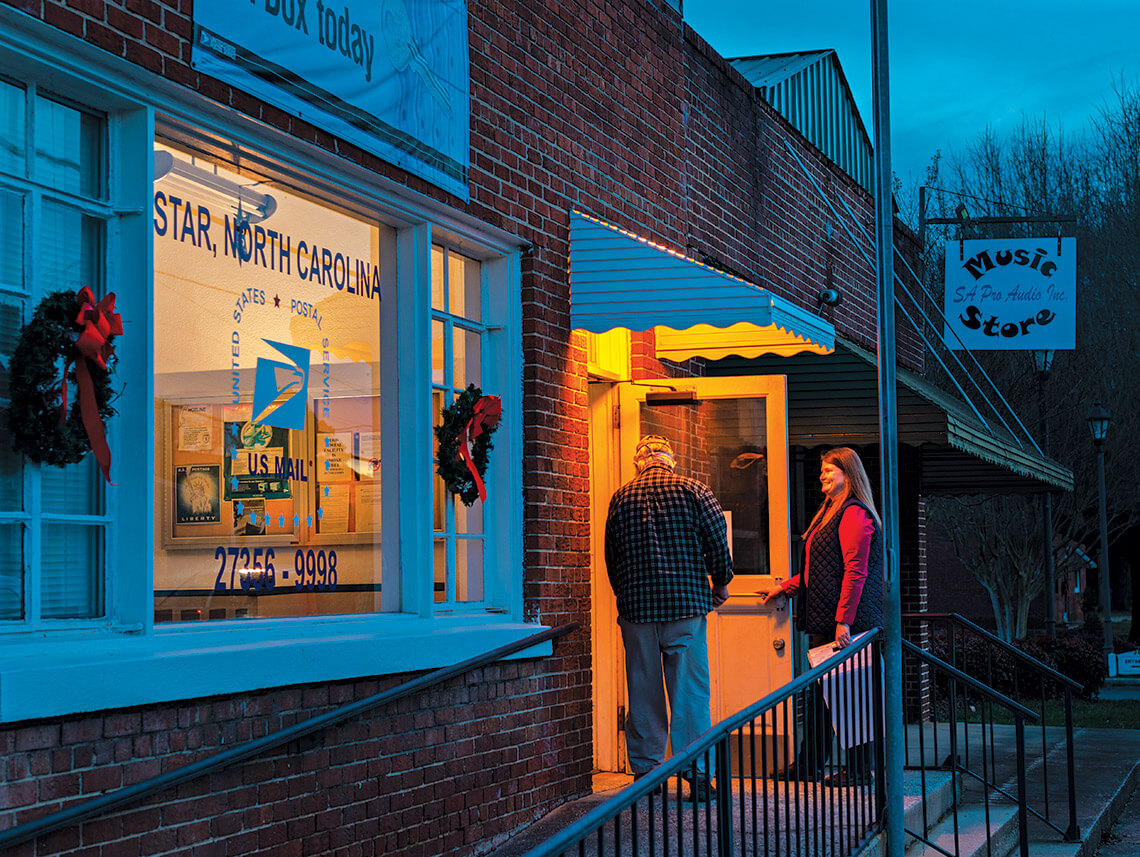 Star lives up to its Christmas Town designation thanks in part to Mayor Mary O’Brien, who bought wreaths for each door and Christmas trees for each pot on Main Street soon after she was elected in 2013. photograph by Jerry Wolford & Scott Muthersbaugh

The first winning design, by Chuck Harris in 1987, featured a star shining over the town. Other winners have also incorporated nods to the town and its past — the railroad that first put Star on the map, the old water tower, Christmas decorations on Main Street, and the hosiery mills that once fueled the local economy — along with traditional holiday images of Santa, Christmas trees, and snow. Former residents, graphic artists, college students, and even a postmaster from nearby Jackson Springs have all claimed the honor in recent years.

The 2020 winner, Chloe VunCannon, an Appalachian State University student and Montgomery County resident, feels the same magic and nostalgia surrounding the stamp that many people do. Her design of a train beneath a star-spangled sky with Santa and his reindeer flying in front of the moon was selected from seven entries. “It brings something unique to the letters because we don’t usually pay attention to the envelope,” VunCannon says, “and it represents the town.”

It’s a familiar scene for locals — the simple star hanging in the post office window, the ceramic “Letters to Santa” mailbox in the lobby. Johnson and her dedicated staff take the time to show new patrons what the postmark will look like on the envelopes so they get an idea of what they’re sending to their loved ones. Some even mail a card to themselves so they can have a copy to keep. Whether they’re locals or visitors, they all share the holiday spirit. “You never know who that new customer is that you might see for the next five or 10 years,” Johnson says.

Customers arrived with around 22,000 pieces of mail to be hand-stamped.

Last December, the tinkling bell on the post office door barely stopped ringing as customers arrived with stacks, bags, and boxes of cards to be hand-stamped — around 22,000 pieces of mail in all. Patrons can bring in their cards and letters for cancellation, or send them in by mail order. The unique postmark is also sought after by collectors, with many mail-order requests coming from overseas. Some visitors come from other parts of the state to get their letters marked with the special design. Last year, one couple drove all the way from Georgia.

Sometime between Christmas Eve and New Year’s Day, a woman came in and told Johnson that she and her husband had always wanted to get their cards cancelled with the Star holiday stamp. He had passed away, but she fulfilled that dream for him. “It’s something special that means so much to people,” Johnson says. After all, despite the excitement surrounding the stamp and other festivities, it’s the people, like Johnson, who make Star truly shine during the holiday season — and they, too, leave a lasting mark.