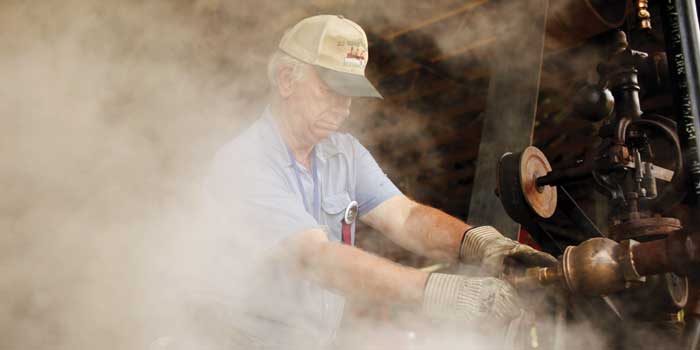 In Silk Hope, where every road frames farmland, they’re easy to spot. You’ll see them any Saturday in the barn at the community’s crossroads. They’ll be grimy and sweat-stained, laughing and joking, as they hammer and saw and turn their barn into a showplace.

On the second Monday of the month, you’ll find them at the Silk Hope Community Center. They come together to eat, sing, and talk community business. They’ll recite the Pledge of Allegiance and belt out “My Country, ’Tis of Thee’’ before discussing the college scholarships they award, the Boy Scout troops they sponsor, or the big-time farming festival they organize every Labor Day. Sometimes they talk about folks who need help getting back on their feet.

These are the Silk Hope Ruritans.

You’ll see, “Fewer Farmers, Higher Taxes!’’ on more than a few bumpers as you drive through a flat countryside speckled with cows, chicken houses, and large bales of hay. And you’ll hear people say, “Whoever’s the president of the Ruritans is the mayor of Silk Hope.’’

Said to be named for a failed attempt to create a silk industry after the Civil War, Silk Hope has no mayor, no local government, and no stoplights. Yet it has a volunteer fire department, a K-8 school, and a big community center where, thanks to the Ruritans, everyone meets.

The Silk Hope Ruritan Club started in 1954. Ever since, the club has become the benefactor, fund-raiser, organizer, and builder of this corner of North Carolina. Along every road that enters Silk Hope is a metal sign that reads, “Ruritan National.’’ The Ruritans make sure their tiny community is more than a spot on a map.

He can drive his Ford pickup along Silk Hope’s twisting two lanes and point out everyone’s house. He knows their families, the names of their children and dogs.

He’s a Quaker minister, as was his father. A member of the Silk Hope Ruritans since 1995, Hobson rattles off the club’s accomplishments along with the names of every family in town.

The club, Hobson says, started the Silk Hope Volunteer Fire Department and helped build a combined fire station and community center in 1969. Two years ago, the original center came down to make way for a new fire station. Afterward, the club raised money and received a state grant to build a new Silk Hope Community Center right across the street. The $1 million structure opened in July 2010.

The club sponsors blood drives, baseball teams, 4-H clubs, and Boy Scouts. Since 1983, the Ruritans have awarded $127,000 in scholarships to local, college-bound high school seniors. Eleven years ago, the club bought a 39-acre farm where the members created a scenic ode to old North Carolina rural life, with a tobacco barn, gristmill, log cabin, and blacksmith’s shop. Nearby is something Hobson calls the steam complex — fit with five steam engines and two boilers. A line shaft belted to and turned by one of those steam engines powers the adjacent gristmill. A steam line from the boilers goes underground to power another steam engine that fuels the adjacent Pugh Ice Cream Building.

Created by the Ruritans from equipment and buildings they salvaged and restored, the farm is a sight to behold.

“If we don’t work together, a lot of things won’t get done,’’ Hobson says, as he drives through Silk Hope. “Washington and Raleigh can’t do it all.’’

Hobson pulls down a dirt road. He passes two pickups and a huge field of ‘silver queen’ corn before driving into a clearing surrounded by pecan trees, apple trees, and a grape arbor. In the middle is a brick foundation where Ulys and Kathleen Cook’s house once stood.

One midnight this past March, lightning struck the house, and the Cooks awoke to the smell of smoke. Kathleen grabbed her pocketbook; Ulys grabbed his cowboy boots, pants, and shirt. They jumped into their minivan, drove to their granddaughter’s house a quarter-mile away, and called 911.

The Cooks had lived in that five-bedroom house as long as they’d been married — 60 years. Within minutes, it was gone.

After the fire, the Silk Hope Ruritan Club organized a benefit supper and raised $17,000. Ulys Cook, now 83, has been a Ruritan for at least half a century.

“You know, it wasn’t the money at the time,’’ says Joan Harris, 54, the Cooks’ only daughter. “It was getting to see people and be with them, and knowing that they cared. Like I said, this is as close-knit a community as they come, and they’ll help out even when you don’t think that they know you exist.”

Says Hobson: “There’s a trust, a respect, a hope. That if things are done or something happens to you, somebody will come through and help.’’

Every year, the Silk Hope Ruritans hold four fund-raisers. By far the biggest happens during the three-day Labor Day weekend: the Old Fashioned Farmers’ Day, an event that started in 1975.

The first year, maybe 300 people came out. Today, nearly 5,000 people come to the crossroads. They come to ride ponies, listen to bluegrass, watch cloggers, see cowboys, visit exhibits, and eat steam-generated ice cream. They eyeball the tractors, lined up in neat rows like cars on a sales lot.

They come to remember an era mothballed by technology and time. Every year, the sense of wow shines through in an annual student essay contest.

“I wondered what the anvil was for,” one student wrote. “In most cartoons, all the anvil does is fall out of the sky, and then it lands on people’s heads.’’

If that’s the case, Jackie Johnson must be Santa Claus.

You might say Johnson helped start the festival because he loves steam. As a boy growing up in Silk Hope, he listened to the whistle of a pressure cooker on a wood stove. After he came back from the Vietnam War, he bought his first steam tractor. When he heard that a Siler City lumber company would scrap a 1907 steam engine, he asked his grandfather to help him move it. Johnson couldn’t bear to see it torn apart. His grandfather agreed, and Johnson refurbished the Corliss steam engine, a beast of early 20th-century technology.

With a flywheel 10 feet high and pistons 14 inches thick, the steam engine runs a collection of machines that’ll remind you of the Smithsonian, including a 1902 cotton gin, an 1890 cotton bale press, and a 1940 sawmill. Bygone technology keeps Silk Hope suspended in time — and ripe with identity.

“You go back to your parents and grandparents, and they say, ‘I remember this.’ And they want to see it because it’s part of their heritage, and it’s part of our heritage,’’ says Johnson, 67, a semi-retired cattle and chicken farmer. “It’s where we came from. It’s part of us. And that’s what keeps this community pulled together.

“We aren’t a nobody. We’re a somebody. This all makes us proud.’’

Michael Rogers feels that way about Silk Hope. He grew up going to the Old Fashioned Farmers’ Day, and every year, the festival stokes his imagination. He started collecting old farm equipment and gas engines when he was 8.

Now 41, he’s an auctioneer, a married father of three, and a Silk Hope Ruritan. He has at least 15 tractors, small to large, turquoise to sunset orange. Among them is the 1939 RC Case he bought when he was 15.

Every Labor Day weekend, he brings out as many tractors as he can for Old Fashioned Farmers’ Day. He has the snapshots to prove it. He pulls out his photo albums and shows you the young boy in overalls beside an antique tractor. “That’s me,’’ he says, and the years roll back. “It feels like yesterday.’’

On a Monday night at the Silk Hope Community Center, the Ruritans hold a covered-dish supper. It’s their monthly meeting, but it reminds you of a family reunion. An endless array of homecooked food covers eight tables: string beans, deviled eggs, pinto beans, potatoes, four different styles of chicken, and a dozen different desserts.

The place is packed. Fifteen students from area schools attend with their parents to receive scholarships, totaling $6,000.

Ulys and Kathleen Cook sit near the head table. Their sons, Rocky and Elton, fellow Ruritans, sit two tables away. At each elbow is an American-flag paper napkin.

Before dinner begins, Ulys Cook leads the whole room in singing “My Country ’Tis of Thee.’’ He starts in, and his baritone voice just booms.

Jeri Rowe, a Greensboro resident, is a staff columnist with the News & Record.