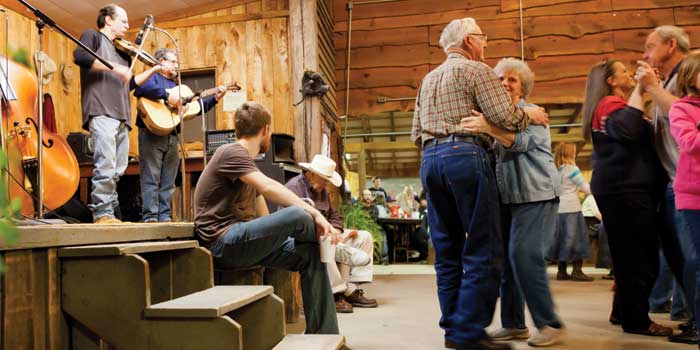 It’s hard to decide if Sims is a restaurant where they play bluegrass, or a bluegrass venue where they serve barbecue.

The name of the place, located on a dirt road in Granite Falls, is Sims Country Bar-B-Que. But you can’t drop in on your lunch break or swing by on your way home from work.

The Bar-B-Que, as it’s called, is only open on Friday and Saturday evenings. The live bluegrass starts at 7 p.m. Signed photos of musicians line the walls, not because they ate here, but because they performed here.

Owner Keith Sims stands by the rock fireplace with his cowboy hat low over his eyebrows. He’s almost 83 years old, and he’s telling the story of this place.

Keith started the restaurant in the spring of 1979. He and his two sons, Joe and Michael, had just returned from a Texas hunting trip where they fell for pit-and-shed-style barbecue and decided to try it back home.

“When we come back from hunting, right out here in the road, the sand had washed down at the bottom of the hill, you know, pretty thick,” Keith says. “Well I took an old stick out there, and I drawed off what I wanted.”

Four large pits eventually replaced his rectangles drawn in the sand. Keith and his sons collected pieces of stainless steel from the salvage yard in Hickory and built the pits themselves.

The Bar-B-Que is located on Keith’s farm, which has been in the Sims family since before the Civil War. Keith was born in the house just up the hill from the restaurant, and he grew up here helping his parents raise tobacco.

The restaurant, or “shed” as the Sims family calls it, is a 5,500-square-foot building with untreated wooden walls surrounding rows of wooden tables with straight-back chairs. They’ve added on to the original shed 13 or 14 times. Most of the exposed wood inside came from the farm. The Sims men cut holly, persimmon, white pine, and maple trees; took them to the local sawmill; squared one side; and hung them on the walls.

The Sims men used one reclaimed log to frame the bluegrass stage, located in the back of the shed with an open dance floor and bleacher seats. The first night the Simses served barbecue, bluegrass musicians also performed on this stage.

One of the most well-known musicians to perform here is Doc Watson, who played at the Bar-B-Que more than 20 times. Doc’s hometown, Deep Gap, is about 40 miles north of Granite Falls.

One night, a man from Louisiana was sitting by the door, pouting and not enjoying himself, when he pointed toward the fireplace and asked Keith, “Is that Doc Watson right there?”

‘Having such a time’

Each weekend, in addition to top-notch bluegrass, Sims Bar-B-Que serves about 300 to 350 pounds of beef, 350 to 400 pounds of pork, and 140 whole chickens. As many as one thousand people have gone through the buffet line in one night.

It’s easy to tell new customers from returning ones. If they stare skeptically at a pile of what looks like silver-dollar pancakes, this is their first time. But if they pile on three or four of those signature corn bread fritters, they’ve been here before.

The hostess goes from table to table with a notepad, asking if it’s a visitor’s first time or his birthday, what his name is, and where he’s from. When the music starts, they make callouts onstage to shouts and cheers from the crowd. Candidates for governor, renowned musicians, and even British politicians have made the list.

One night, Sir Marcus Fox, a member of British Parliament, visited the Bar-B-Que with his staff. Once the music started, as Keith tells it, “They got out there, and you could have taken the bodyguard’s gun if you wanted to, they were having such a time.”

With a smirk on his face, Keith shares one more story, about a reporter who came to write a piece on the restaurant when it opened.

“The lady said, ‘I’m going to give you 10 reasons why you’ll never make it: You’re on a dirt road, you don’t allow any alcoholic beverages,’ and this, that, and the other. And I said, ‘Well, that’s fine. If I won’t make it because of that, I don’t want to make it.’ ”

Two years later, Keith says, the same reporter came back for another story and apologized.

Derek Lacey is a freelance writer and newspaper reporter in Charlotte.