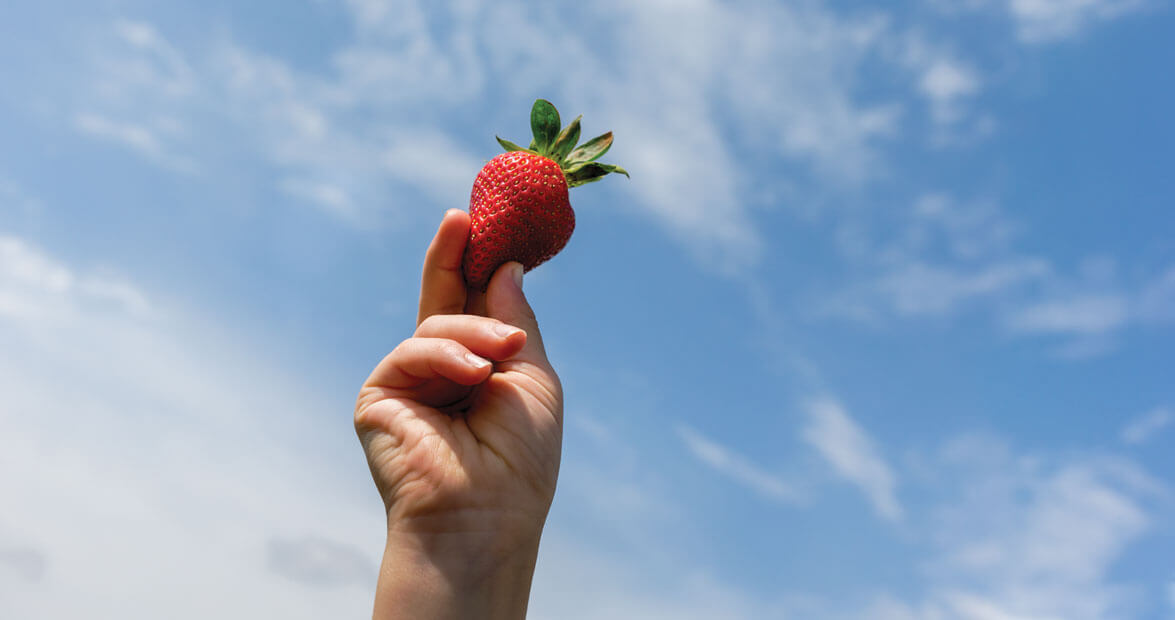 Of everything the Patterson family cultivates on their 450-acre farm — strawberries, tomatoes, cucumbers, and bell peppers — the most important thing may be fun. In 1994, the family added a produce market and gift shop, and began offering tours. There’s a petting zoo and a playground, plus a pumpkin patch and a corn maze in the fall. And of course, pick-your-own strawberries each spring. The Pattersons have noticed how the “pick-your-own” concept has evolved through the years: It used to be about picking as many strawberries as possible, for making jams and preserves. Now? Families might go home with just one basket — and a whole lot of memories. 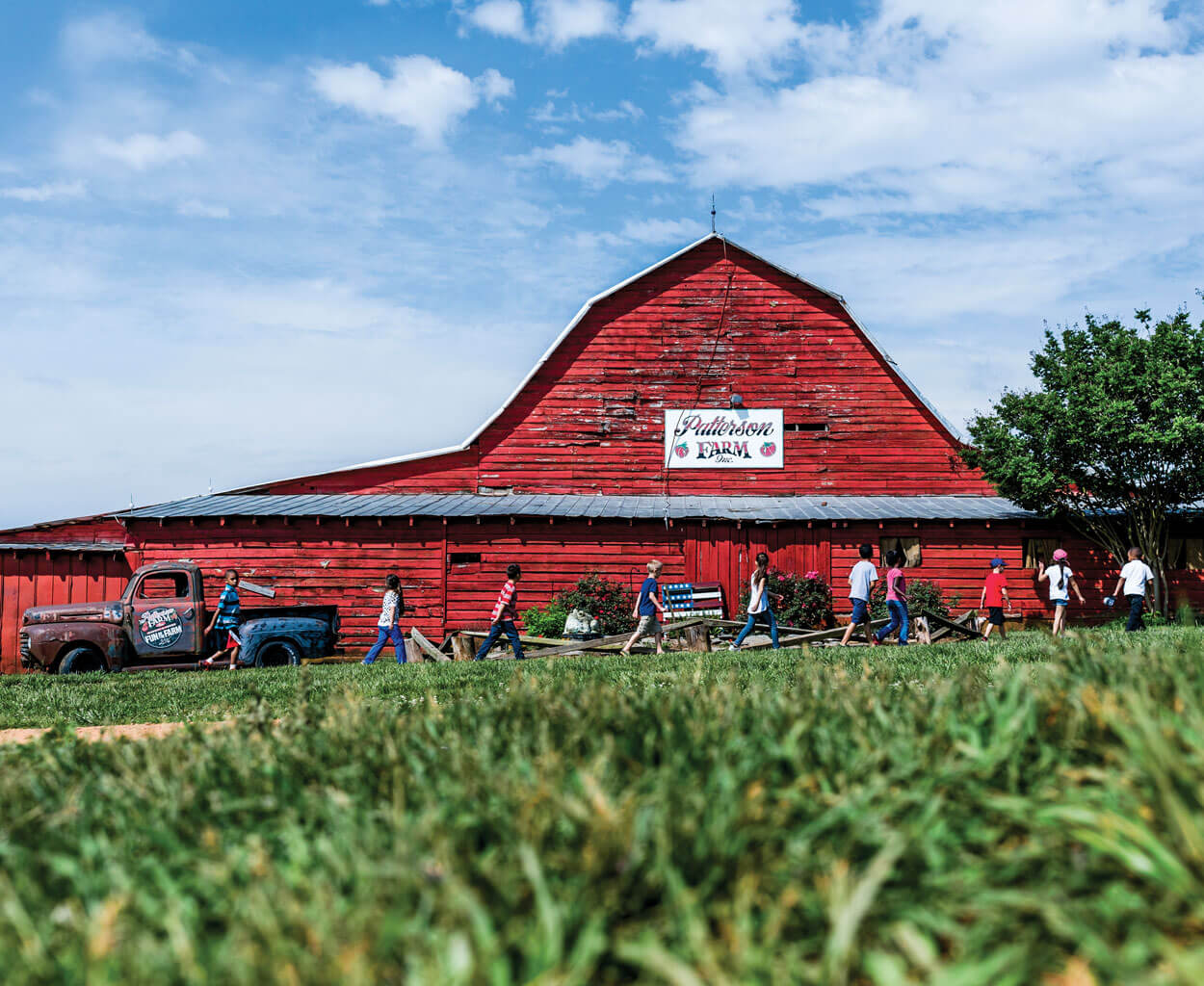 Mother’s Day is the single biggest weekend for strawberry sales in North Carolina. (Hint: We bet Mom would love a strawberry shortcake this year.) photograph by Charles Harris

Throughout the month of May, Patterson Farm welcomes school groups — like this class from St. James Elementary in Denver — to teach students about how strawberries are grown. As part of the NC Farm to School Program, Patterson Farm supplies strawberries and tomatoes to school cafeterias across the state. These educational field trips bring the berry full circle.

Mother’s Day brings families from around the Piedmont to the fields that have been in Dean Ingram’s family for more than 150 years. So many folks show up that his wife, Rhonda, calls it the “Black Friday of strawberry farming.” The farm is as much a multigenerational affair for the Ingrams — daughters Casie, Mikaela, and Lauren are the fifth — as for the families who return every spring. 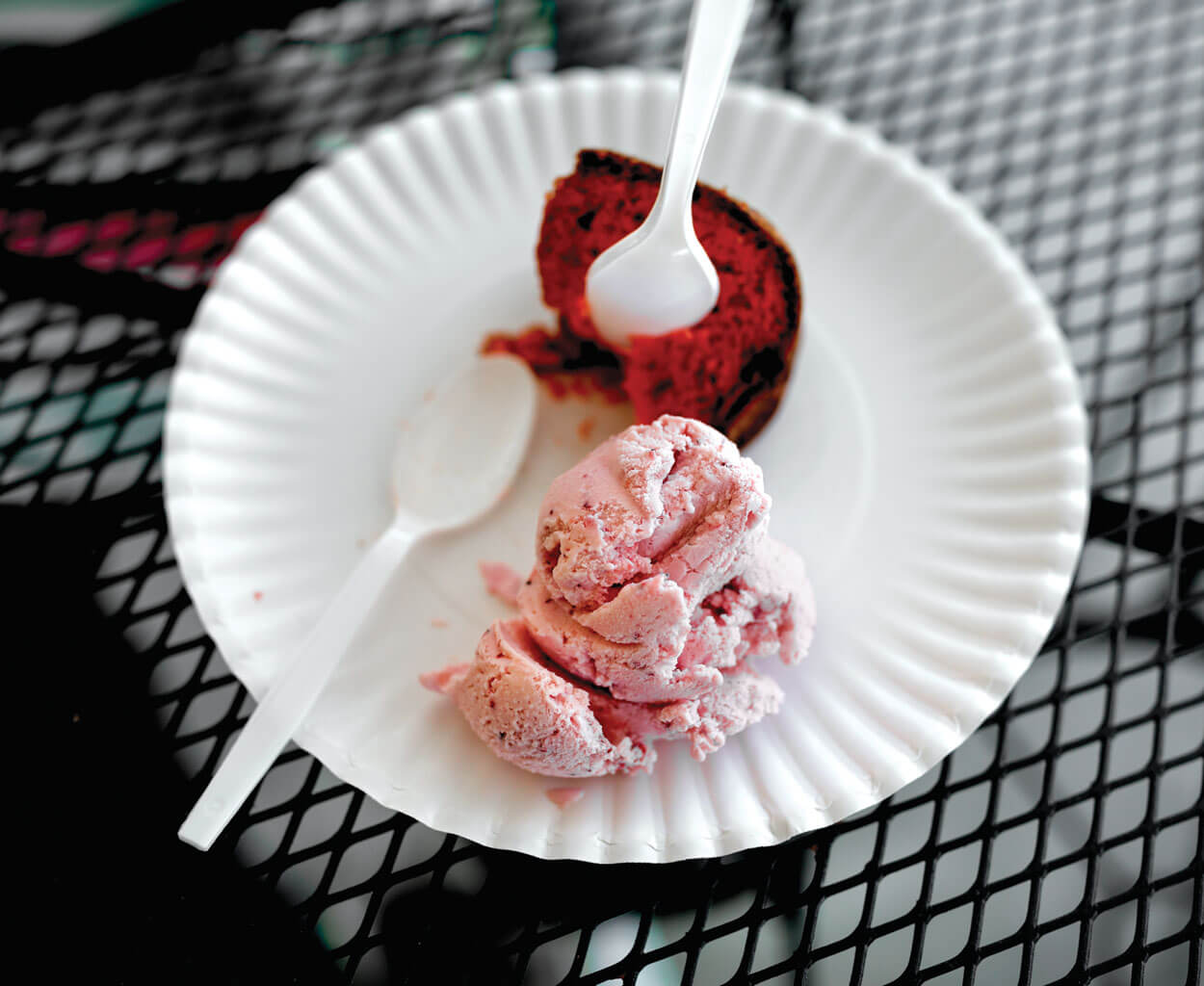 When visiting Ingram Farm, order a scoop of the strawberry ice cream and a slice of cake. photograph by Charles Harris

Rhonda recognizes third and fourth generations now filling their pails, buying berries by the pound, and sharing a dish of strawberry cake and ice cream. The Ingrams’ dessert kitchen, as with all aspects of the farm, is all hands on deck: Order the strawberry cobbler, created by Casie, and you might be served by her grandma Rosa Boyd. At Ingram’s, it’s all in the family.

Lee Berry — yes, that’s his real name — has seen folks in cars with tags from as far away as Alaska stop at his roadside market to order strawberry shortcake and lemonade, load up on corn and cucumbers, and stretch their legs before continuing on down U.S. Highway 220. Oh, and the 24-foot-tall, 484-square-foot strawberry that houses an ice cream stand is a pretty big draw, too. Lee — who’s also the mayor of Ellerbe — had been growing strawberries and selling them out of the back of his truck for several years when his wife, Amy, got the idea for “The World’s Largest Strawberry.” 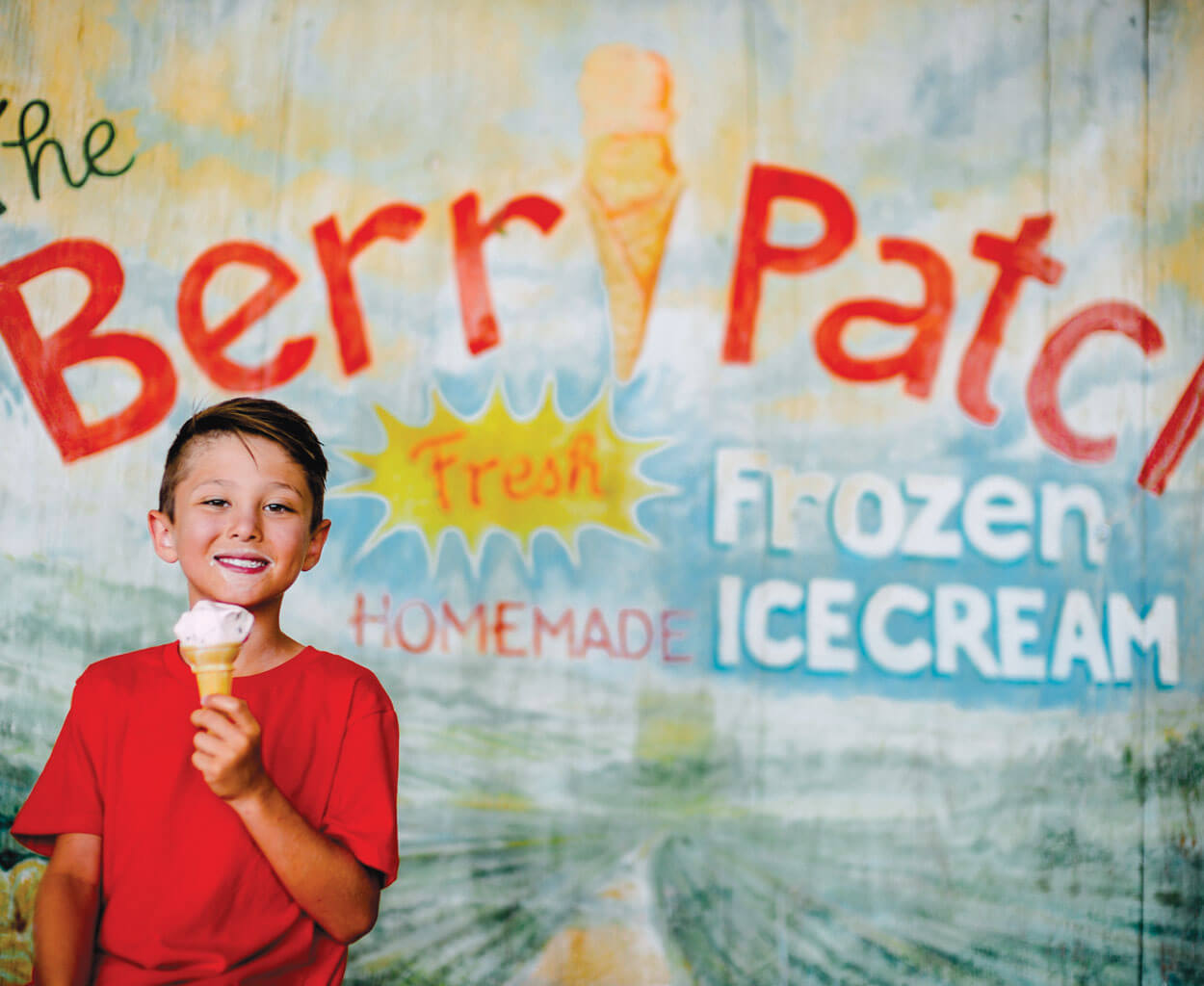 Sure, any one of The Berry Patch’s hand-churned ice cream flavors, from pineapple to pistachio, will make you a happy traveler. But you know what they say: When in Ellerbe … order strawberry. photograph by Charles Harris

Although the berry building looks like it could be made of concrete, it’s actually a wood frame covered in foam. Which means it’s portable — a few years ago, a highway project required the Berrys to load their berry onto a truck and hit the road.

Pick a strawberry on a farm in North Carolina, and there’s a good chance that the plant it grew on came from Cottle Farm’s plant nursery. In the decades since Ned Cottle planted his first strawberries in 1964, his son, Ron, now the company’s president, has seen the family business blossom into a 750-acre farm in Faison, a pair of pick-your-own fields in South Carolina, and a plant nursery on Prince Edward Island in Canada. 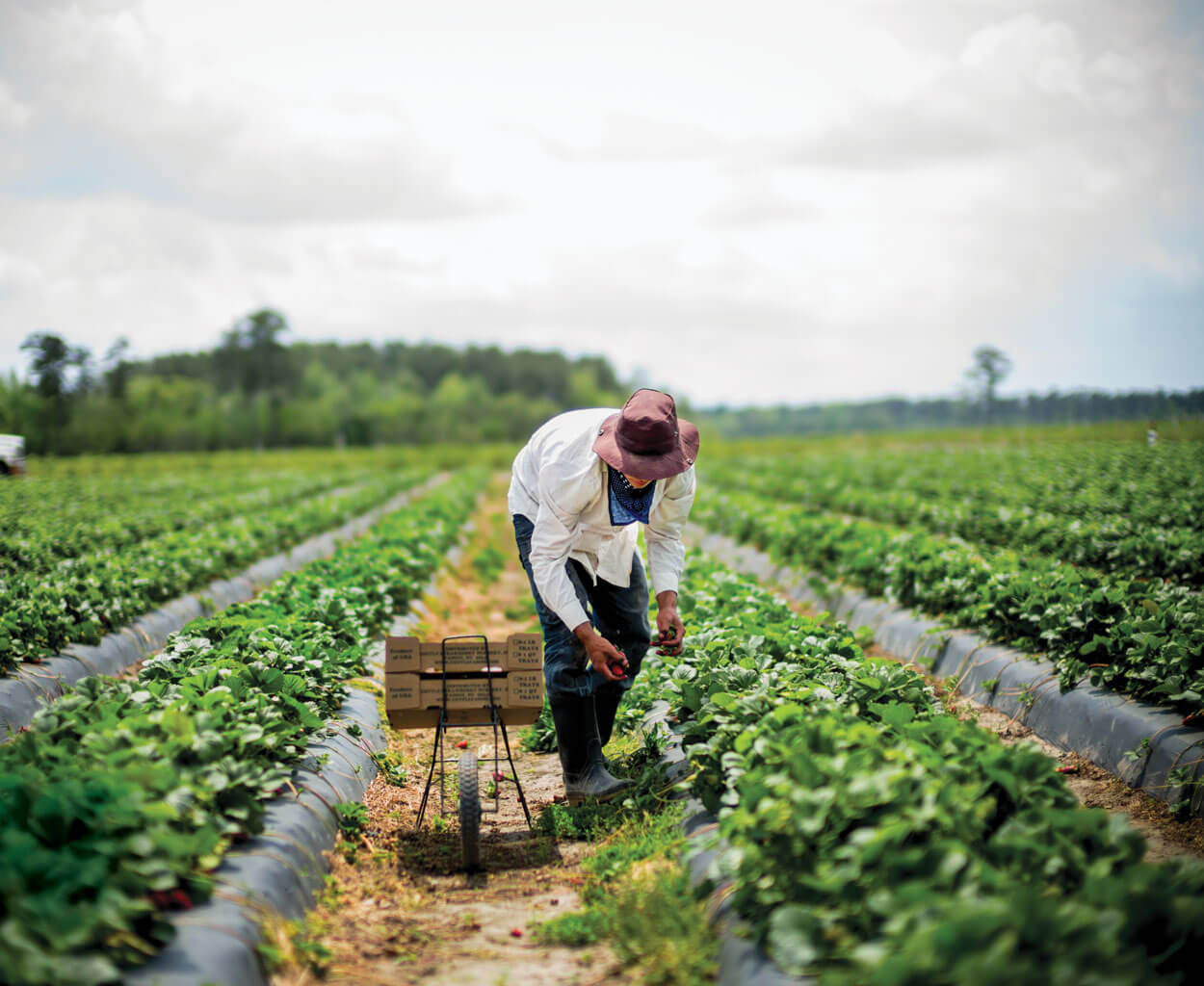 Pick-your-own strawberries at this Faison destination. photograph by Charles Harris

On the Faison farm, 150 to 175 employees pick strawberries, pack them right in the fields, and load them onto trucks to be sent to stores along the East Coast. The Cottles devote most of their acreage to other produce, including blueberries, muscadines, peppers, squash, and cantaloupes, but they know their berries are beloved. They’ve even mixed them with muscadines in a smoothie they bottle and call JuVn8 — so you can sip your strawberries.

In Pender County, Cal Lewis tends the legacy that his late father, Everette, started in 1953. Everette was the first in his family to graduate from college, and the first in the state to propagate certified strawberry plants. After studying horticulture at NC State like his dad, Cal joined the farm in 1982. 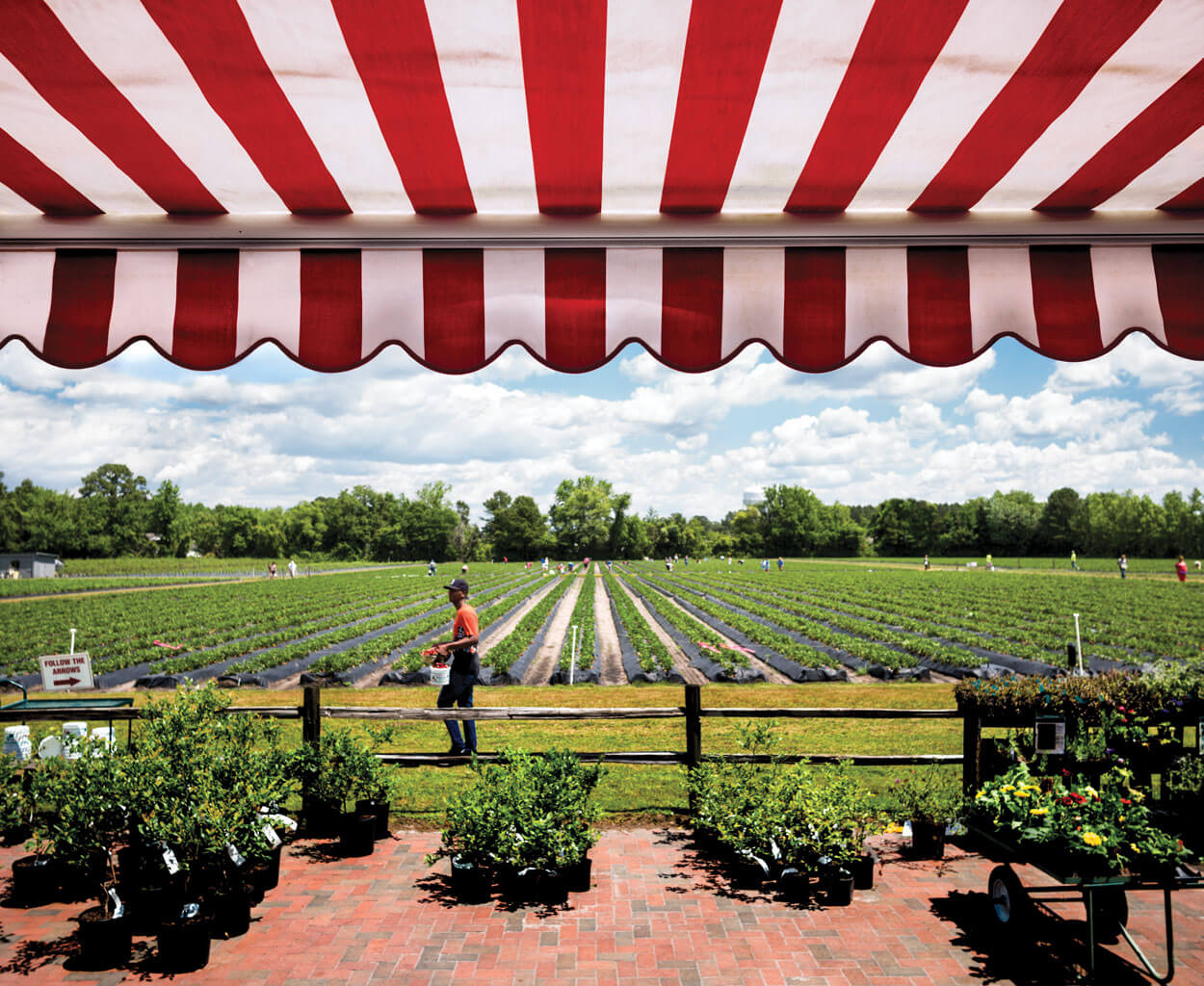 Today, he oversees hundreds of acres of blueberries, blackberries, strawberries — and, most recently, “tunnel-grown” strawberries in the winter. It’s the next logical step for a family for whom innovation, like their love of berries, comes naturally.