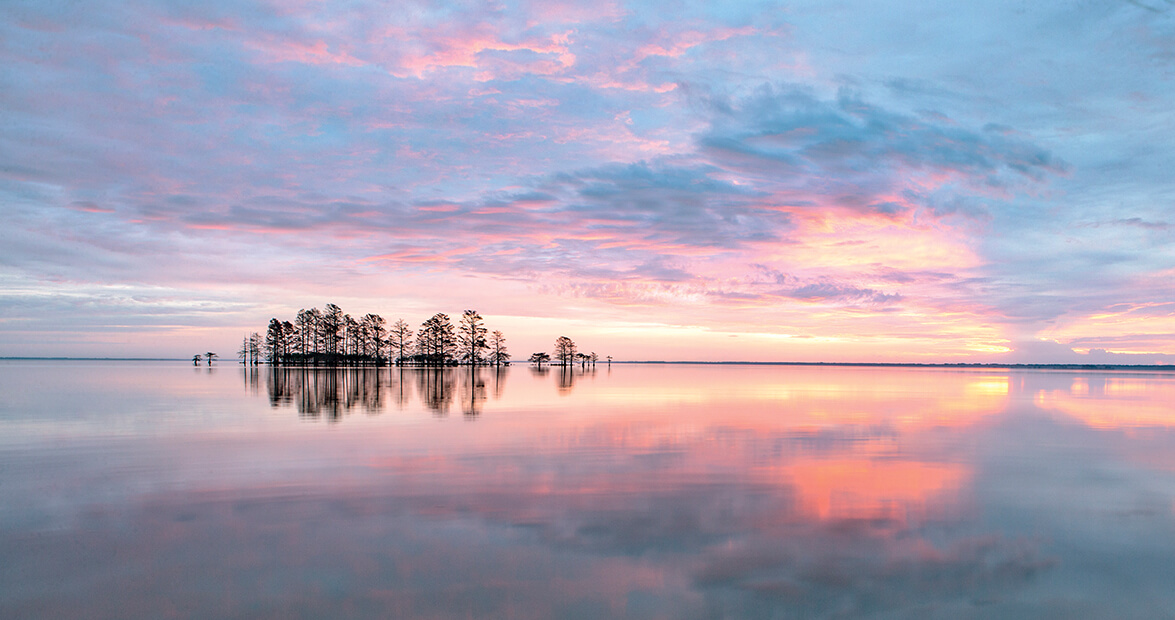 EDITOR’S NOTE: The N.C. Wildlife Resources Commission and the U.S. Fish and Wildlife Service have come together to develop a watershed protection plan for Lake Mattamuskeet. The preservationists are considering privatization of the Mattamuskeet Lodge to raise the funds necessary to restore.

A once-grand hunting lodge perches on the edge of Lake Mattamuskeet. Its garnet-red tile roof and blue-and-white 12-story observation tower, which resembles a lighthouse, hint at its former glory.

Kris Noble, who played at the lodge as a child, still gets a little wide-eyed when recalling what it looked like inside. “There were animal heads and stuffed animal furs and big fireplaces,” she says.

Mattamuskeet Lodge was once a hotspot for bird and game hunters, parties, and special guests. Author Rachel Carson, who penned the seminal environmental book Silent Spring, stayed here while writing for the U.S. Fish and Wildlife Service.

Some people even got married at the lodge, which had a great dining hall with long tables, fireplaces, and wooden furniture. “It was pretty fabulous,” says Noble, who married here in 2000 and is now the director of planning and economic development for Hyde County. “It was really Old World.” 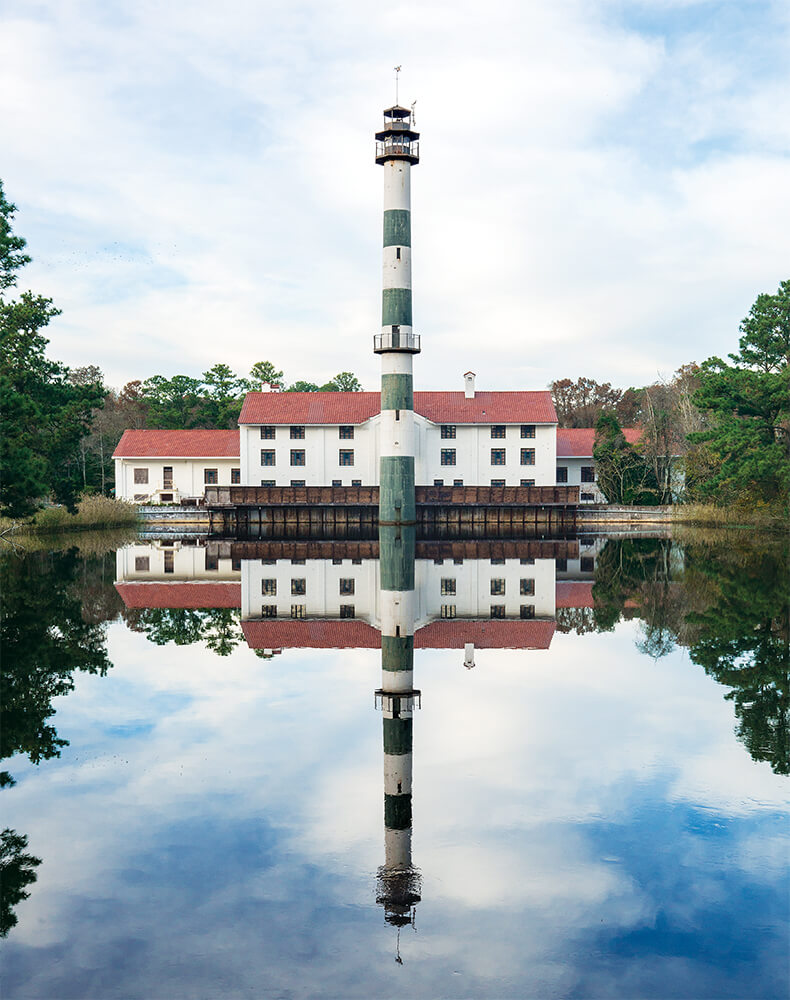 An old pumping station became the Mattamuskeet Lodge, a haven for hunters, in 1937. Preservationists are raising money to restore it. photograph by Todd Pusser

Yet, Mattamuskeet Lodge embodies both the failure of a man-made experiment and the resilience of nature. With the purpose of draining the lake, the structure was built in 1915 as the world’s largest pumping station. When that project was scrapped, it became a hunting lodge in 1937. Now, the local landmark has been largely empty for more than three decades, since it closed to goose hunting in 1974. Yet preservationists are counting on the area’s natural beauty to generate interest in restoring the lodge.

“I can tell you, I’ve hunted all over the North American and South American continents,” says Jamin Simmons, owner of Dare to Hyde Outdoor Adventures, “and I’ve yet to go to a place where somebody did not know of Mattamuskeet Lodge.”

On a map, Lake Mattamuskeet is a bean-shaped, blue patch on a peninsula that juts like a misshapen thumb into Albemarle and Pamlico sounds. At 18 miles long and seven miles wide, it’s North Carolina’s largest natural lake, but it was once a forest where Algonquin Indians hunted. They named the area Mattamuskeet, meaning “dry dust.”

The lake’s origin stories are many. One tells of how fires burning deep within the peat soil might have cleared the area of vegetation, leaving a place for water to drain and fish to thrive. But not much water: The lake has always been shallow — most of its 50,000 acres measures only 18 inches deep — with rain and creeks keeping it fresh.

Maneuvering through the wild celery are the fish: largemouth bass, black crappie, channel catfish, chain pickerel, warmouth, yellow perch, white perch. And blue crabs. Big ones. Some of the biggest on the East Coast. Folks around here will tell you about crabs with shells measuring seven inches from point to point.
Bisecting the lake is a causeway lined with benches, where you can soak in the view or cast a line. Elmer Cooper, wearing a cap with fish symbols and the words “Hooked on Jesus,” is trying to hook a white perch — or whatever bothers to take the bait. He and his wife, Carolyn, live in Plymouth and often drive down to the lake to spend an afternoon. 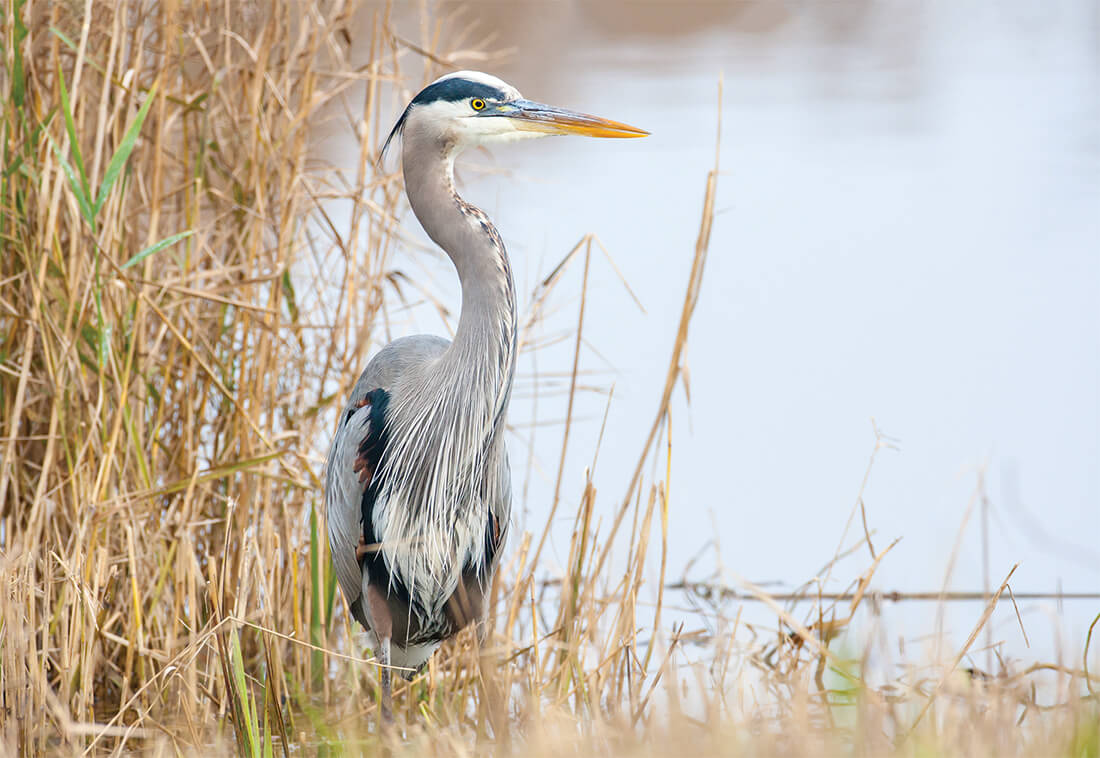 He makes small talk about bait (worms), the weather (warm and gorgeous), the fishing (pretty good), and the wonder of this knee-deep, dam-free lake that humans didn’t create but nearly destroyed. “All this would be farmland,” he says. “Amazing, isn’t it?”

The bed of Lake Mattamuskeet is thought to have some of the richest soil in the world, fed by nutrients from surrounding land, which naturally drain into it. Scientists have compared the lake bed’s importance with the Mississippi Delta and the Nile River delta in Egypt.

Rich soil makes for excellent farming, and in the early 20th century, developers undertook an ambitious endeavor. They began digging miles of canals and built a three-story pumping station to drain the lake. This engineering managed to keep the lake waterless three times during the 1910s and ’20s. But by the 1930s, the scheme was scrubbed. The lake was too resilient and the cost too high to keep it dry. So in 1934, the United States government acquired the lake and turned it into a wildlife refuge.

The pumping station became a world-renowned lodge that attracted hunters until 1974, when bird migratory patterns changed, and the annual Canada goose population nosedived from 20,000 to 6,000. With so few geese, the refuge no longer allowed hunting; the lodge closed to the public, and, over the years, began to crumble.

The lodge was listed on the National Register of Historic Places in 1980, which saved it from demolition. Although the lodge has been closed since 2000, Congress transferred it and more than six acres of adjoining land to the State of North Carolina, after the federal government couldn’t afford the repairs.

With its long, spindly legs, ivory feathers, pointed beak, and graceful neck, the great egret is an emblem of coastal North Carolina’s wetlands. It’s one of the more than 240 bird species — including snow geese, Canada geese, Northern pintails, great blue herons, and several species of ducks — that fill the sky around Lake Mattamuskeet, living here as part-time or permanent residents.

The most famous of the lake’s birds — the tundra swans — sweep in blizzard-like from November through March. Tens of thousands of swans, their plumage white and their beaks black, fly in from the Arctic to spend their winters at Mattamuskeet.

Yet there is tension between Lake Mattamuskeet’s role as a wildlife refuge and Hyde County’s search for economic opportunities that rely on the lake as a natural resource. In an odd twist, earlier this year, state wildlife officials announced that they wanted to add water — to raise the lake level — to accommodate bass fishing. However, like the drainage experiment 100 years ago, the intervention could disturb the area’s ecology, halting the migration of fish into and out of Lake Mattamuskeet, and drowning plants that birds feed on in shallow water.

Lake Mattamuskeet is still a hunter’s haven. And because hunting, fishing, and tourism are important to the county, there is interest in restoring the Mattamuskeet Lodge. Ten years ago, the state planned to contribute a few million dollars each year to the project until renovations were complete. The North Carolina Division of Cultural Resources selected a team of architects and engineers, led by Raleigh architect Mark Williard, to renovate the lodge. Over the next three years, they gutted the building and made it structurally sound. But the economy tanked, and money for the project dried up. No significant work has been done on the lodge since 2010.

Many preservationists imagine the lodge as a multi-purpose building for special events and retreats. It could house an education center to teach people about the area’s vibrant ecosystem.

The cost of finishing renovations has ebbed and flowed like the tides, and the revenue stream from the state remains murky. But perched here in this wetland wonderland, a sleeping giant awaits the dawn of a new day.