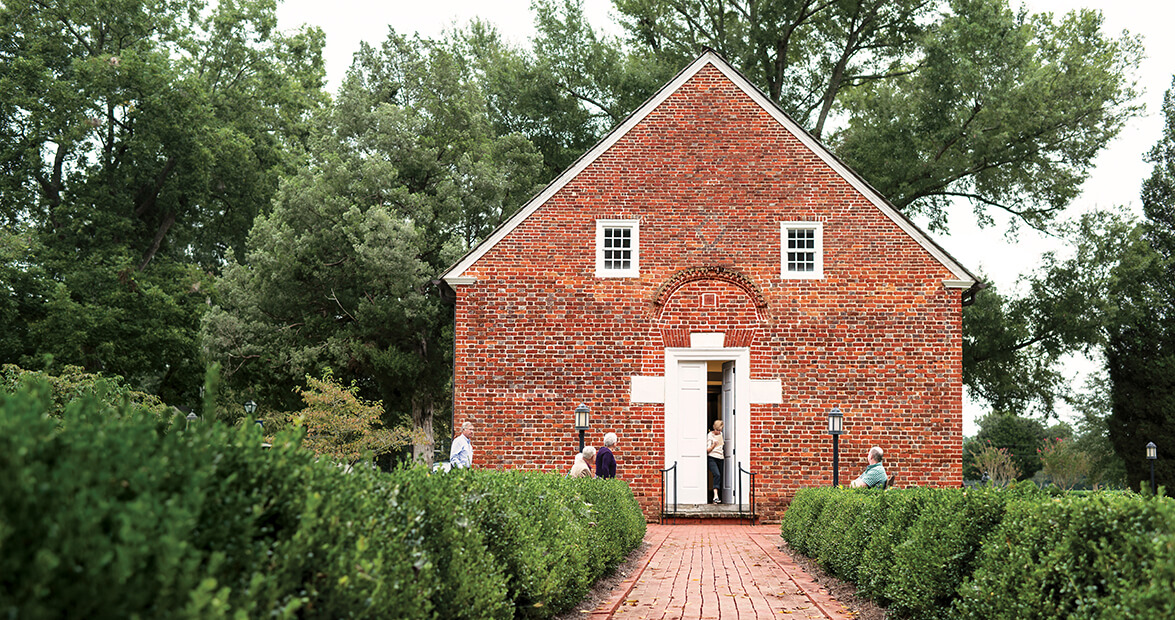 EDITOR’S NOTE: This article was originally published in May 2016.

For 282 years’ worth of Sundays, someone has sat, and stood, and sung, and knelt, and prayed here, in this space, inside these very walls. Someone in a waistcoat, in a hoop skirt, someone holding a homemade rag doll or an imported, porcelain-headed version, has stood at the first strains of the opening hymn. Someone wearing a bustle, or Confederate gray, or denim overalls, or deep black mourning, has unobtrusively bowed his or her head as a sign of humility as the processional cross was carried aloft and down this very aisle toward the altar. Someone in a middy blouse or boxy suit; in knickers or a knitted cloche; in a belted, darted, shirtwaist dress or Army fatigues, has opened the Book of Common Prayer and followed a liturgy dating from 1549. Like these colonists, these forebears, these faithful, this Sunday, in the oldest town in North Carolina, in the oldest standing, active church in North Carolina, in a short-sleeve dress and flats, I’m doing what they did, and what has been done every week for 282 years.

Like nearly everything in Bath, St. Thomas Episcopal Church is mere yards from water. The town was founded in 1705, on Bath Creek, which leads to the Pamlico River, which leads to the Pamlico Sound, and on to the Atlantic. Behind the church — simple, squarish, steeple-less — are fields of crops. The church’s front yard — indeed, its back yard — is randomly dotted with gravestones, both recent and ancient. No fences. No foundation plantings. A few firs, crooked with age. It’s easy to imagine how St. Thomas looked in 1734, when it was constructed. Little, it seems, has changed.

Some early settlers are buried in the cemetery of St. Thomas, and others under the church floor. photograph by Lissa Gotwals

It is hard, though, to imagine George Whitefield, a mid-1700s traveling evangelist who reportedly cursed Bath for its inhabitants’ wicked ways, ever darkening the door of St. Thomas. Episcopalians don’t have a problem with dancing or scalawags, for one thing. For another, “evangelism” isn’t a word much used by Episcopalians — in the 1700s, or 282 years later, either. And there’s only that single door to darken, at any rate, leading into the church’s white interior. No side door to slip out through after the service. No back door leading to a room where the altar guild performs its duties of polishing brass and preparing the Eucharist. This is not that kind of church.

I’m greeted at the single step of the entrance and handed a bulletin by an elderly gentleman named Bob Scalf, who asks where I’m from. I tell him — Rutherfordton — and he says Oh! Bob just returned from his 65th reunion at Mars Hill College — now University — where he was with a classmate who was an Episcopalian in Rutherfordton, and who went on to be involved with St. Mary’s Episcopal Church, in West Jefferson, where the famous frescoes adorn the walls. And, of course, I know exactly whom Mr. Scalf speaks of, four decades later, because my own church had a picnic every spring at the fellow’s farm, where there was a genuine log cabin I longed to live in.

The choir processes over the original pinkish tile floor, 12 strong in a church with dozens of members on a crowded Sunday. There’s no rug to soften the singers’ footsteps, in the aisle or anywhere else. The windows are plain panes: no curves, no color. In fact, there’s nary a curve in sight, especially not in the shape of the pew backs, ramrod-straight and old enough to hark back to the days of smaller humans, reaching only the small of my back. Like Episcopalians everywhere, the congregation tends to sit toward the rear of the church, though there’s no hiding at St. Thomas. No closets or baptistery, no narthex or sacristy, no vesting room for the minister. No microphone, no sound system, no visible lighting. The pulpit is little more than a lectern, and the Rev. Diane Tomlinson, the priest, doesn’t use it anyway, but, rather, walks and talks and gestures from the — well, there’s no nave, either. Everything at St. Thomas is visible. Faith, though, is believing in what is often invisible.

They needed faith, those colonists in the New World. Imagine them, fearful and frightened, riding out hurricanes and nor’easters, facing Indians and accidents, starvation and disease, huddled, likely, within these brick walls — two feet thick, with mortar made of lime from crushed oyster shells — taking shelter with, and talking to, the Almighty, whose Son had promised that “where two or three are gathered in my name, there am I among them.” Here, too, were they thankful: for abundant game and gentle breezes; for family and food and harvest and safe passage; for a child or husband returned from a journey, the sea; from Appomattox, Germany, Normandy, Korea, Vietnam, Afghanistan.

Like nearly everything in Bath, St. Thomas Episcopal Church is mere yards from water.

A small space is, by definition, intimate. The small space that is St. Thomas fosters a human closeness, and a spiritual closeness, like the one created when the Gospel is brought down the middle of the aisle into the midst of the people — when, automatically, the congregants’ heads and bodies turn toward the cross and the priest. Here are the nearly tuneless chants of psalms remembered from my childhood, which mortified me when spend-the-night friends came to church with me. My friends never knew them, and even if you could read music, there wasn’t any to read. You just had to know, through familiarity. The standing and sitting and kneeling every few minutes was a source of embarrassment, too. “Pew aerobics,” Robin Williams famously called them, in his list of “Top 10 Reasons to Be an Episcopalian.” Episcopalians — “the frozen chosen,” who get “the gilt without the guilt” — seem to attract jokes, and probably make them up themselves. (Wherever there are four Episcopalians, there’s a fifth.)

It stands to reason that a sanctuary coming into three centuries in age will reflect various décors. Stark Puritanism, perhaps, or elaborate Victorian woodcarving. Rustic altar hangings or ornate English silver chalices. But St. Thomas is merely simple, not stark — reflecting, these centuries later, what was necessary (“meet and right” in the wording of the old Book of Common Prayer) for worship, and little more. The rich, dark mahogany canopy that hangs over the altar is a small Anglican expression of grandeur that stemmed from the Catholic Church. The sanctuary light, though — a candle in a red lamp that burns continuously, day and night, in the sanctuaries of all Episcopal churches, signifying God’s presence — is purely Victorian. St. Thomas’s sanctuary lamp is surrounded with metal scrollwork. A sloped and pointed cap diffuses the candle’s rising heat just enough that a tiny, delicate, cross suspended a foot above the candle’s flame — God is always with us — gently, silently sways. 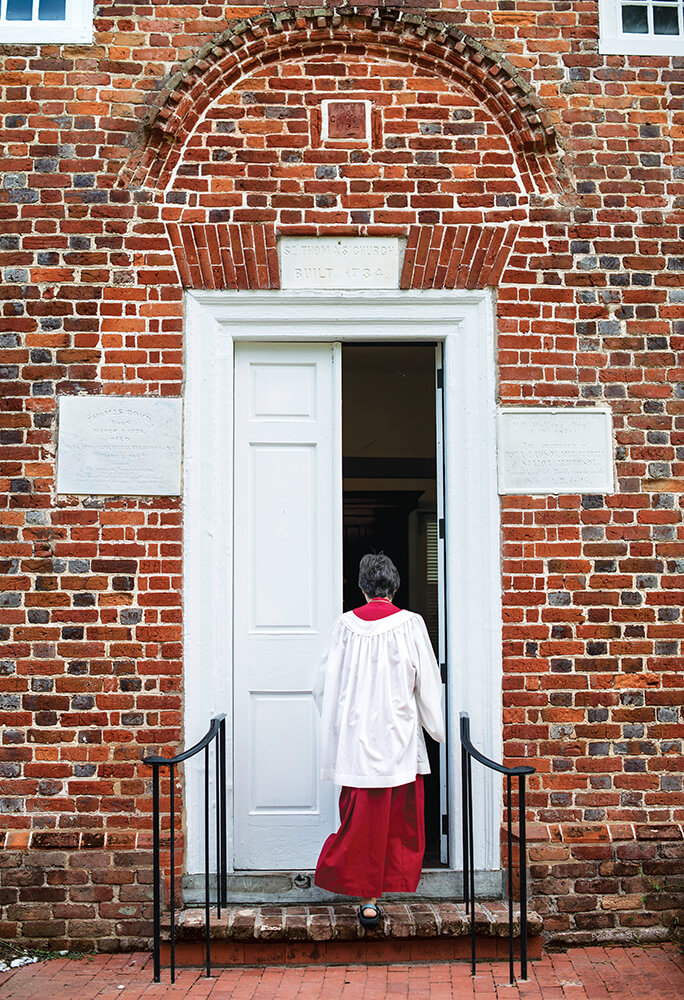 Markers honoring the sanctuary’s building, and the town’s founders, make the door resemble a cross. photograph by Lissa Gotwals

“We live on a boat. But during hurricane season, we live here and attend St. Thomas,” the woman in the pew in front of me whispers, interrupting the quiet. But it’s a gift of the liturgy — the words of a structured service — that whatever the daydream or interruption, you can return to the Great Confession, or Lord’s Prayer. The writer John Updike once said that he mentally composed his books during church. I love this peaceful idea, and it seems especially apt here, at this church, in this town, which is described these days as “sleepy.” Bath is a village where the appearance of the homes indicates nothing about the demographics, the socioeconomic levels, of their owners. In turn, the parishioners of St. Thomas are dressed in bow ties and Carhartts, lace-ups and Crocs. As Christ instructed us, they welcome this stranger, invite me to coffee hour, in a building just beyond a 16th-century bust atop ballast stones used in ships that sailed into Bath, safe from the vicious clutches of Edward Teach, or Blackbeard, who lived here occasionally.

“Aren’t you Episcopal?” my editor asked when suggesting I visit St. Thomas. 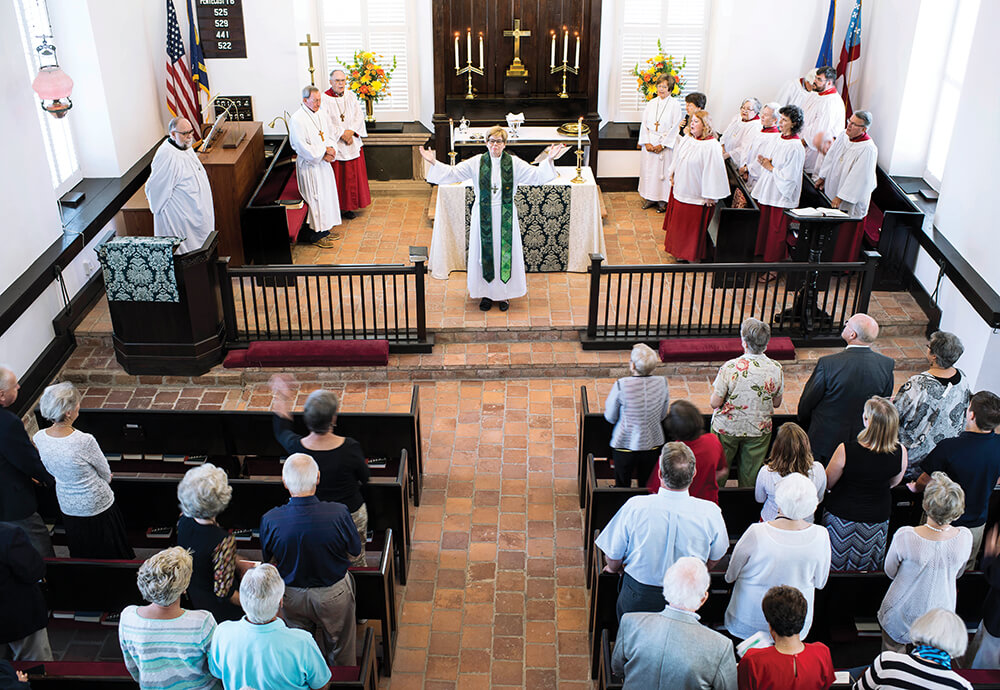 And across the state this Sunday, every Episcopalian churchgoer is listening to the same passages and readings, is reciting the same creeds and prayers, as they have for centuries. Someone sat in a St. Thomas pew in 1790 and 1859 and 1928, and chewed on an Easter hat grosgrain chin ribbon the same way I chewed on mine on the other side of the state in 1962. Someone prayed fervently that a son or husband would return from conflict on another continent, or perhaps only miles away at Fort Macon, or Fayetteville, or Greensboro.

Through it all, St. Thomas has stood squarely, serenely. Ever-present but never imposing. Being in the presence of the Holy Spirit is always humbling, yet equally humbling this Sunday is the realization of the lives, the histories, contained within the walls of St. Thomas. Some are evidenced by the initials carved on the old, soft bricks at the entrance; some are evidenced by the names carved on the gravestones in the churchyard. Most have no evidence at all. They’re contained in the timeless institution that is the upper-case Church, and in this lovely, lower-case church that stands near a creek that flows to the sound and then on to the boundless sea.