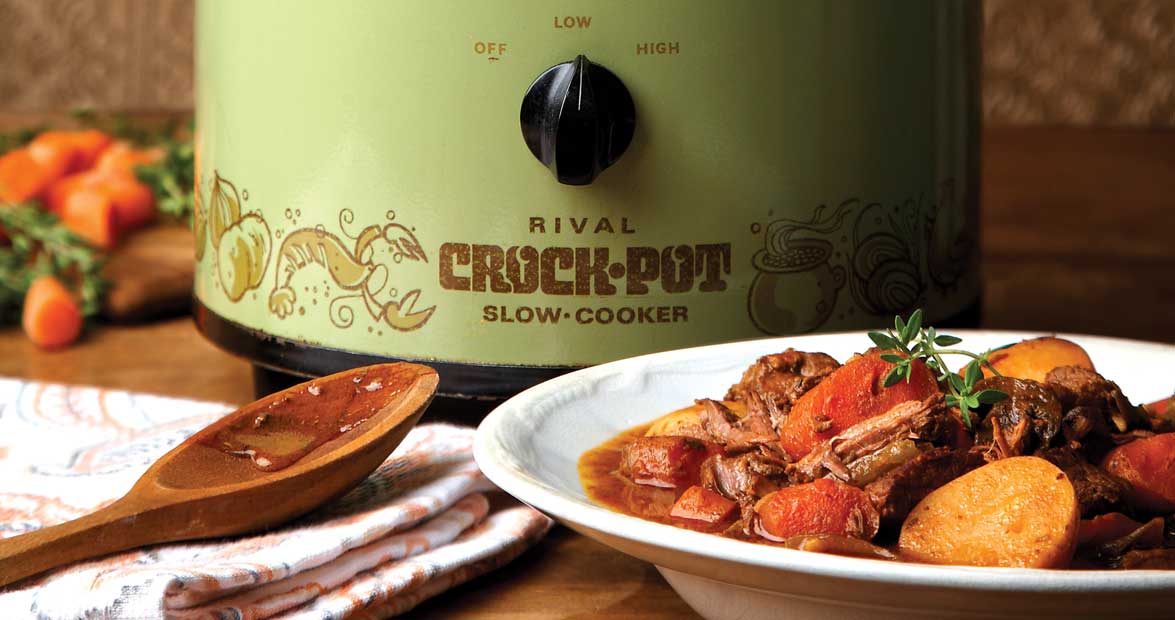 When the Rival Company introduced its slow cooker, called a Crock-Pot, in the ’70s, an early slogan intended to put a pot in

every kitchen was “It cooks all day while the cook’s away.” Ain’t that the truth?

Yes, a slow cooker can turn groceries into grub, but the way I see it, its magic is in making almost everyone believe they can fix a good supper, even the people who rarely twist a stove knob and those whose idea of a well-stocked kitchen involves plenty of paper plates. Like gazing into a crystal ball, cooks can peer inside and see the hot meal in their future. Put good stuff in and even better stuff comes out. Presto chango.

The first Crock-Pot I ever saw was the one my grandmother got with S&H Green Stamps. Compared to the high-tech wizardry ways of today’s cookers, it was primitive. The setting choices were off, low, and high, with no timer. The pot was an unwieldy one-piece topped with a fragile glass lid. A brown cord stuck out of the back like a short, skinny tail that had to be kept dry. Washing it was maddening, but its avocado green color matched her other appliances, so that was a plus.

My recollections are vague about what she made first, but I suspect it was one of the soups or stews she could whip up from memory. A noted cook in the community, she couldn’t have cooked poorly if she’d tried, and her kitchen always smelled like comfort.

In contrast, I clearly remember my first Crock-Pot escapade. I volunteered to prepare a multicourse end-of-year feast for the French club at my high school, a few dozen kids who aspired to parler français un jour. I chose beef bourguignon as my entrée, the very kind of braised-meat dish meant for a slow cooker. Step one was rounding up enough cookers to use. No problem. Step two was talking my grandmother into helping me. Also no problem. Step three was convincing her that I had to use real wine, not grape juice. A problem — almost. No recipe involving alcohol had ever been made in her household, but she was all about me doing well in school (and this was going to be an education for the both of us), so we reached a tacit agreement to keep this minor detail to ourselves.

A few hours later, slow cookers full of bubbling bourguignon were plugged into nearly every outlet in the house, from the kitchen to the bedrooms and down the full length of the hall thanks to a lifeline of drop cords. Several hours after that, I hauled away all those cookers and served my classmates a fine meal. Then I washed and dried dirty slow cookers until midnight.

I saved a bowl of bourguignon for my grandmother. It was the first dish I ever cooked that she’d never tasted before, which meant that green Crock-Pot was suddenly a time machine, moving our camaraderie forward in an instant: That evening she was talking not only to her eldest grandchild, but also to a fellow cook. It was a glimpse of our future.

She passed down that Crock-Pot to me when I moved into my first college apartment. It served me well for nearly 30 years, even after I bought snazzier, shinier versions that functioned better, but never accomplished more. When it finally stopped working, I saluted its loyal service with a glass of red wine.

There’s an uncommon bond between busy cooks and their supper-making machines. We think kindly of vessels that make us feel capable, confident, and, at least for a few minutes around the table, caught up with the to-dos of the day. And if that’s not a magic time machine, then I don’t know what is. Crock-Pots let those who are not expert cooks to feel as though they are. Presto chango.