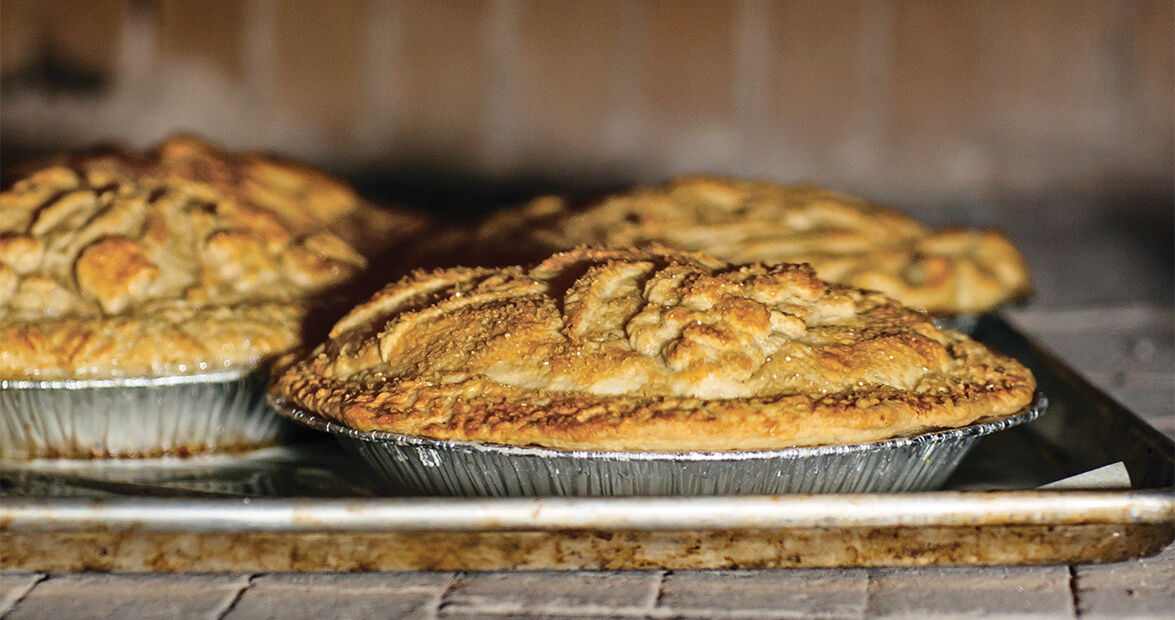 A baker must know her oven, no matter the baker, no matter the oven. This piece of wisdom comes from Tara Jensen, pie guru and owner of Smoke Signals bakery in Marshall. Bakers and wannabes pilgrimage to the tiny mountain town to learn at the hearth of Tara’s oven — an outdoor, wood-fired brick oven built in 1998 by Alan Scott, a legendary mason from California. His skills and reputation remain mythic in the world of bakers. Tara’s behemoth sits under a tin-roofed shed flanked by firewood, only a porch-depth from her baking workshop, which itself is only a dozen steps from her house. Here, life and pie are one. 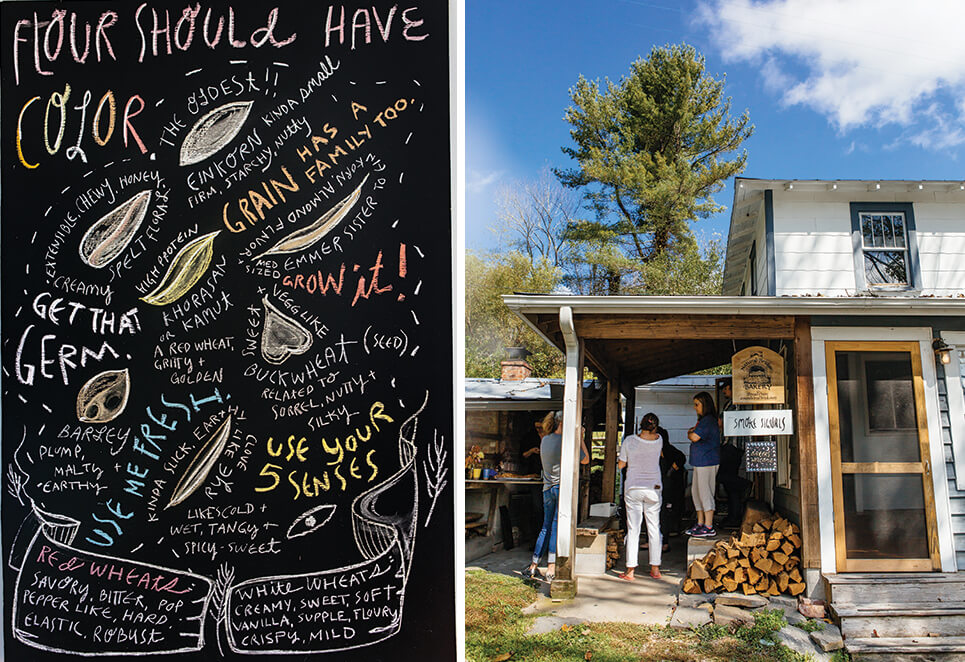 Tara moved to this homestead in the fall of 2013, but Smoke Signals is the third bakery to occupy the space, following David Bauer’s Farm & Sparrow and Jennifer Lapidus’s Natural Bridge. No matter who lives next door, the Alan Scott wood-oven — a steadfast, persnickety anchor — resides as a fixture, a permanent neighbor to those who occupy the cluster of houses in a community called Walnut.

A native of rural Maine, Tara wound up in Asheville, eventually working for David and commuting from her downtown apartment out to Marshall each day for a couple of years. Until David moved on and she moved in, however, she’d never fired up the oven herself. In the wee hours of that first solo morning, she texted David, asking, “So, I just light a fire in this thing?”

Just like baking, fire building is rudimentary, but comes with a million variables and nuances. No matter how much you know, fire is always the unpredictable element in wood-fired baking. Thanks to the tutelage of a thousand fires, Tara’s now a technical expert on both, but she points out that it still comes down to “just light a fire in it.” Then watch, listen, learn.

Early in the morning before a bake, she leans into the cavernous oven chamber to crosshatch sticks of kindling, as though building with Lincoln Logs. When they ignite, she stokes the fire with lengths of tree skins, the long shards of bark shaved from round trees to make square lumber. As the day progresses, she feeds the flames and rakes the coals to calibrate the heat. The oven has multiple thermometers, but she only uses them to corroborate what she’s learned from standing at the hearth, fire after fire. She steps into the yard to check the color of the smoke and the ripple of heat rising from the chimney, reading the smoke signals to get a feel for how the fire is behaving. “People can understand the dynamics of fire and the science of baking and still fail at both,” she says, “because they ignore their feelings about both.”

The oven tends to inspire such insights, especially when the bakery fills with eager students. What started as a small-scale shop has become the site of intensive baking workshops, where bakers of all skill levels come to hone their craft with Tara. Teaching reflects the bakery’s motto: Bake + Gather + Share. The sparse two-room space, where every object is curated for practicality and beauty and every nook holds the aroma of freshly baked bread, makes an ideal classroom. An enormous blackboard outlines in colored chalk the flow of a baker’s day, and the life cycle of bread loaves, croissants, and apple pies, from miller to oven.

Next to the blackboard is the door to Tara’s side yard, where the oven lives. A rocker near the oven door invites anyone to take a seat, sip tea, and chat with fellow bakers. Here and there, scattered like treasure, glass beads are embedded in the concrete and mortar. When the light catches them, they flicker, as though the oven has twinkling eyes, giving a wink to the promising, the talented, the patient among Tara’s students.

Tara’s hand-tooled paper stencils, pinned to the walls and taped to the door of her walk-in cooler, display her talents as an artist. She uses these stencils to pattern the tops of loaves with flour as they go into the oven. No two stencils are alike, but most feature bold slashes, geometric patterns, and images inspired by nature. Tara carves the same images into the ink stamps that she uses on her packaging, such as bags, tags, and pie boxes.

Similar motifs appear in the top crusts of her famous pies. She shows her students how to use pastry shapes to embellish their crusts by cutting and twisting layers of pastry scraps, as one might assemble a collage or quilt. Each pie is an artistic expression of form and function. They hold up to scrutiny, and they hold up in the oven. This is no small feat. Anyone who uses the expression “easy as apple pie” has clearly never made one in a wood-burning oven.

Classmates move from the kitchen to the oven like bees in and out of a hive. The low buzz of their work is punctuated by pops of sound: the swish and hiss of a damp mop slapping across the oven floor, polishing it clean after the coals and ashes are pushed aside; the scrape of bench knives on clean cutting boards; the thump of rolling pins and the thwack of knives cleaving apples. Tara leads by example, demonstrating each step and sharing instructions that make her sound equal parts cheerleader, guru, and maestro. “When you roll dough,” she says, “roll like the wind.”

Tara often teaches classic apple pie, which, she reports, ties with sweet potato as her personal favorite. She recalls the apple hand pies that her family bought at roadside service stations when she was a little girl. She also sees apple pie as a way to bring a sense of place to her baking. Her pies feature local fruit from the surrounding mountains. Creasman Farms in nearby Hendersonville, for example, supplies her with Honeycrisps, Jonagolds, and Gingergolds. Most years, they give her a new apple to get to know: Macouns this time. A few neighbors also have learned that dropping off a basket of yard apples on Tara’s doorstep results in a pie of gratitude appearing on theirs. 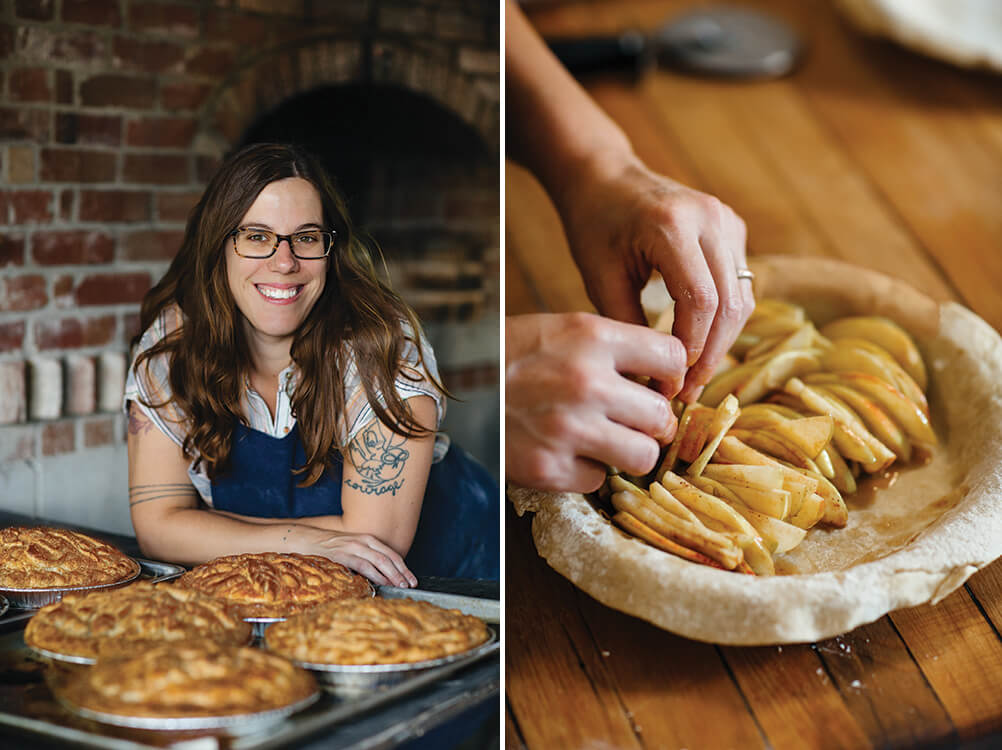 Tara with the fruits of her labor, and apples packed tightly in each pie.

The apples matter, but the crust matters most. Tara fell in love with pie baking as an extension of her passion for laminated dough. Laminating dough requires a series of technical steps — folding, turning, rolling — that result in hundreds of interleafed layers of impossibly thin pastry and butter. When baked, laminated dough yields puffed pastry, croissants, and, in Tara’s case, piecrust with a crisp exterior and an ethereal interior of delicate, flaky pastry.

To get a sense of a Tara Jensen apple pie, imagine tender crescents of sweet apples gently perfumed with spices, encased in an intricate pastry shell, with a hint of wood smoke, and the collective wisdom of all the pies baked in that oven for more than two decades.

As a teacher, she is unfailingly complimentary about her students’ pies. As a baker, however, Tara examines each of her own pastries to assess what went just right and what she (and, usually, only she) sees as imperfections. As she puts it, “I scoff at perfection, but always strive for it.”

During her classes, Tara shares thoughts on the expression of the artist’s way: Creativity, she says, requires discipline and practice. Yes, one can have flashes of genius, but counting on those is like waiting for lightning bolts to illuminate your path. She reminds her acolytes: “Bakers must know their personality and their comfort level when it comes to risk, then learn to go over and under that line in service of baking,” she says. “If you get lost or scared, go back to the place where you last felt confident, and start anew.” Comforting words for bakers who, for the first time, must slide their creations into the maw of a wood-burning oven. 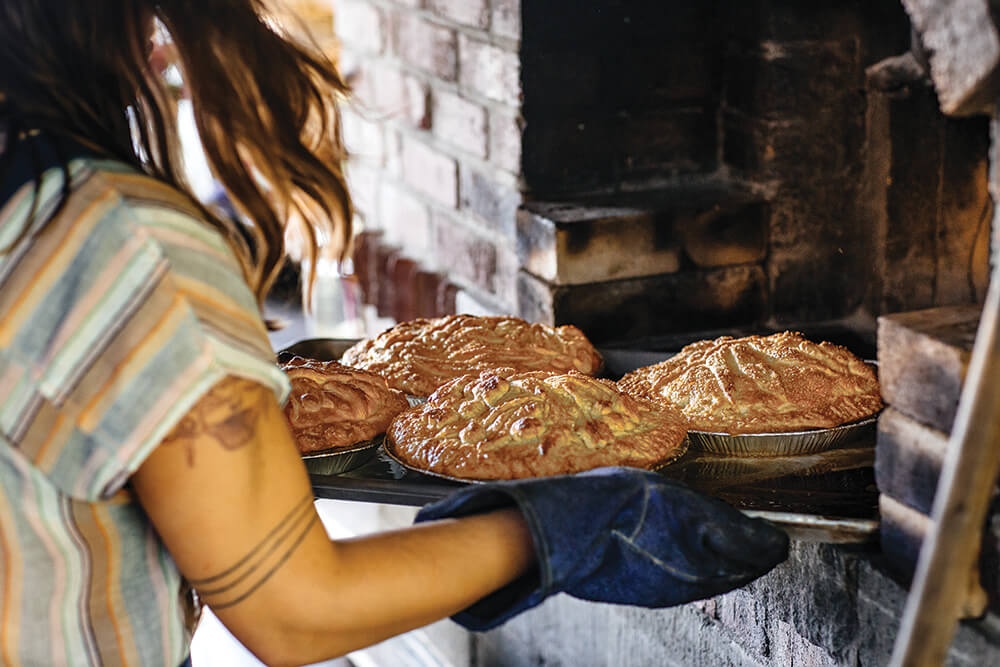 Intricate top crusts are burnished in the hot coals. Tara’s baking life with this exacting oven chronicled in her new book, A Baker’s Year: Twelve Months of Baking and Living the Simple Life at the Smoke Signals Bakery (St. Martin’s).

When asked why she thinks her classes are so popular — they sell out shortly after she announces the dates — she ventures a guess: All bakers who are serious about becoming better bakers, including herself, are somewhere on their own journey, she says. Just as she had to develop affection and camaraderie with her demanding oven, her students also have work they must do. Good baking and good lives require a lot of hard work, she reminds them: “Work isn’t a burden; it isn’t disappointing. It’s exciting. It’s encouraging.”

By mid-afternoon, the kitchen is once again tidy, pies are cooling in boxes, and students gather to exchange hugs and email addresses. Tara offers a few parting words of wisdom: “Eighty percent of baking is muscle memory, so repeat a skill until your hands can no longer do it wrong, only right.” As the students make their way back down the sloped driveway to their real lives, Tara turns and walks back up the path to her home, to what is — for now, anyway — her oven.