The photograph is the same as one that you have from years ago, I’m sure. Three of us stand together, arm in arm, in front of a stone ski-lodge fireplace — Sugar Mountain Ski Resort — and, good Lord, it’s 30 years ago. We’re wearing jeans and jackets because we’re not, and never have been, expensive-ski-clothes types. Laughable hairstyles that mark the moment as the ’90s and us as much younger. Chins up, smirks on, a bit lordly, but above all, we’re happy. We’re skiing, and from the looks of it, we’re done and stopping for a snap before the drive home. Unless I’m forgetting something, it is my last ski trip to this very day.

I remember the skiing. Chasing each other down those nice intermediate blue-square trails with a little curve but not too much slope, so that 30-something dudes who ski maybe once a winter can showboat without too much danger. Starting with the beginner green-dot trails just once or twice to get going — easy enough to feed the overconfidence that later yields a spectacular crash or two on the intermediate trails. Those trails begin to feel a little more advanced as afternoon shadows creep across, turning what had been granular snow into crusty ice, which will cause you to catch an edge and remind you who you really are, Mister Bigshot.

Another wipeout when, absurdly, I decide to try a black-diamond run and don’t navigate a single mogul. I’m lying on my back, grinning in the pot below the very first one, before I remove my skis and crabwalk to the edge of the trees. Then a long walk of shame, crunching down through months of rime, laughing at myself for acting a fool.

But hold on: snow. I want to talk about snow. The making of snow. So let’s start with snizzle.

On a more recent visit to Sugar Mountain, I see, next to the lift ticket line, an information sheet that reads, “Snizzle possible till early afternoon.” But Gunther Jochl, the Austrian owner and de facto head snowmaker at the resort, doesn’t want to talk about snizzle. Leaving out all the tropes about how many words the Inuit (and people who make snow for a living) supposedly have for snow, Gunther avoids using the made-up term. Though, it must be said, the tiny, featherlike drops of snow that whirled in the air as I’d earlier approached Sugar Mountain by car struck me as exactly the snow equivalent of a thin drizzle. So, snizzle.

I’m here at the resort to learn about the process of snowmaking, and, as the therapists say, I am conflicted, which is not unusual for the Northerner-down-South that I am when the topic of snow comes up. Not conflicted about skiing, mind you — I am certain that I would no longer bounce up cheerfully from a wipeout, so I’ll leave that to the overconfident guys who fill the lodge.

Watch Sugar Mountain turn into a sparkling winter wonderland — and see the snowmakers in action.

Nor am I conflicted about response: Regarding plowing and driving, I heap scorn on those Northerners who heap scorn on the Southern response to snow. Do you think we should buy and maintain garages full of plows for our twice-a-season snows? Then quit complaining when it snows and everything shuts down. Do you think Buffalo would effortlessly prepare for and withstand a hurricane? Then quit criticizing Southern snow response.

On the other hand, the half-inch or almost-inch snows that elicit squeals from children and sighs from adults? I confess that when I first moved down here, I rolled my eyes. This isn’t snow, I would say, a lifetime of lake-effect blizzards in my rearview mirror. Then an editor sent me out to do a weather story one snowy-ish Raleigh day, and my hostility evaporated. Snow still hisses when it falls among the silent pines, inch or foot, North or South. I scolded myself for being a snauvinist and pledged to do better.

So when the opportunity to visit the snowmaking infrastructure at Sugar Mountain arose, I bundled up and drove across the state. I love snow, and I love infrastructure, so in some ways, my return to Sugar Mountain is a dream come true. First, that snizzle sets up an instant internal hot-chocolate wiggle. And then I enter the lodge, which smells like wet skiers, as all ski lodges do, and happily sit for some time with Gunther.

If he doesn’t like “snizzle,” Gunther admits that he talks about “graupel,” a more granular snow, and “corn snow,” which is the granularized version after it’s on the ground. But, really, “We just use the word ‘snow,’ ” he says, and begins waxing if not lyrical, then technical about snowmaking. He explains how, for beginning skiers, made snow is actually better than natural snow. “Man-made snow is denser; natural snow, you could catch an edge,” he says. “Hardly anybody breaks a leg anymore.” Which helps explain that run of mine three decades ago. Plus, he says, made snow lasts longer.

And where does this made snow come from? Positioned along the slopes of Sugar Mountain are dozens of snow guns, which automatically kick on when the temperature dips to 29 degrees. A pipe network and enormous pumps deliver pressurized water to the blowers; there, the water is atomized, mixed with pressurized air, and blown out over the slopes. From his laptop, Gunther clicks through big screens above his desk: It looks like a SCADA system — that’s “supervisory control and data acquisition,” for those who are not infrastructure nerds — as complete as those for small-town water systems. About four or five miles of water and air lines can pump thousands of gallons of water a minute, with five air compressors that can work as hard as the water pumps. A little extra water in the mix makes the snow stick better, which is helpful for building the base; a little less water makes it more powdery, and no skier doesn’t love that powder. 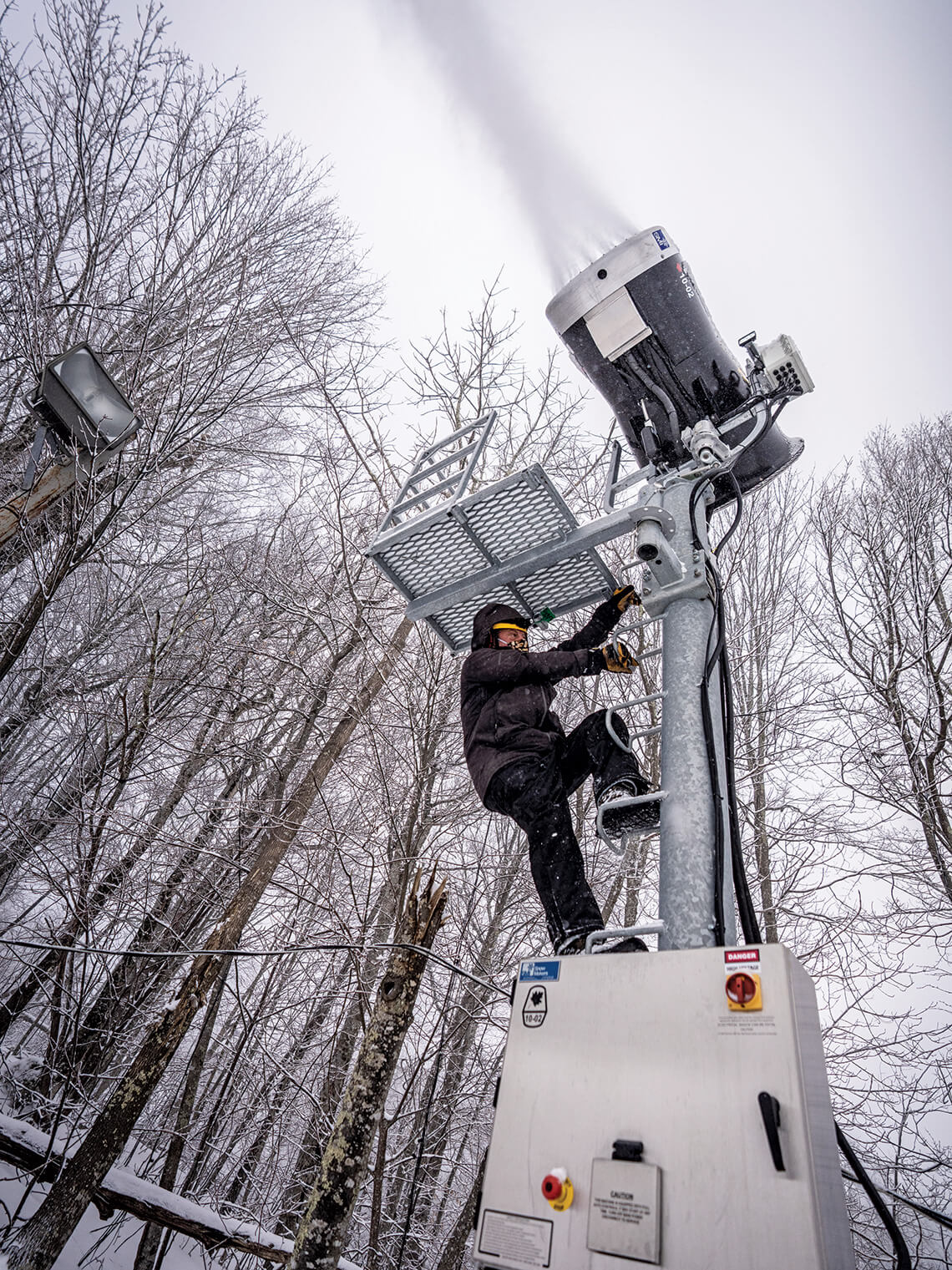 Snowmaker Dave McManus climbs the resort’s pole-mounted snow guns periodically to move their work baskets so that they don’t ice over. photograph by Derek Diluzio 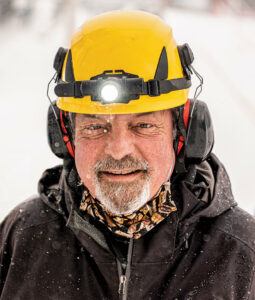 But if you want to talk snowmaking, you need to leave the lodge and go see it being made. So snowmaker Dave McManus outfits me in skier-style overalls and takes me out onto the slopes, where we visit snow guns, many of which sit on sleds. Each one sounds like a 737 and sprays out a freezing mist of particles whose quality Dave checks by sticking his arm in front of the blower and examining the particles in the creases of his jacket. He can check size, quality, and how they clump, and then he can adjust, snow gun by snow gun. It’s noisy and messy, but it’s also kind of miraculous: There’s about 10 feet of snow on Sugar Mountain that Dave’s crew made themselves, snow that drives the mountain economy during the winter.

Roaring machinery churning out industrial snow may lack charm, but still: snow. I love this capacity, and I love the cheerful, burly, let’s-do-this way that snowmakers go about their business. And I don’t blame skiers for loving the fact that snowmakers do this, and that they do it so well.

But … snow. When I approached Sugar Mountain earlier in the day, it appeared as an island of production snow in a mountainscape distinctly lacking in white. It felt kind of weird, which brought out my latent snauvinism. I grew up in snow country, and when the snow came, I would wait until nighttime and locate a streetlight. Then I’d sit and watch through the window, sit and absorb, as snow filtered silently down through the cone of light that the streetlamp cast. No jet-engine roar, no industrial systems. Just the ineluctable magic of the world, for a moment, choosing silence, making a transformation elegant almost beyond description. 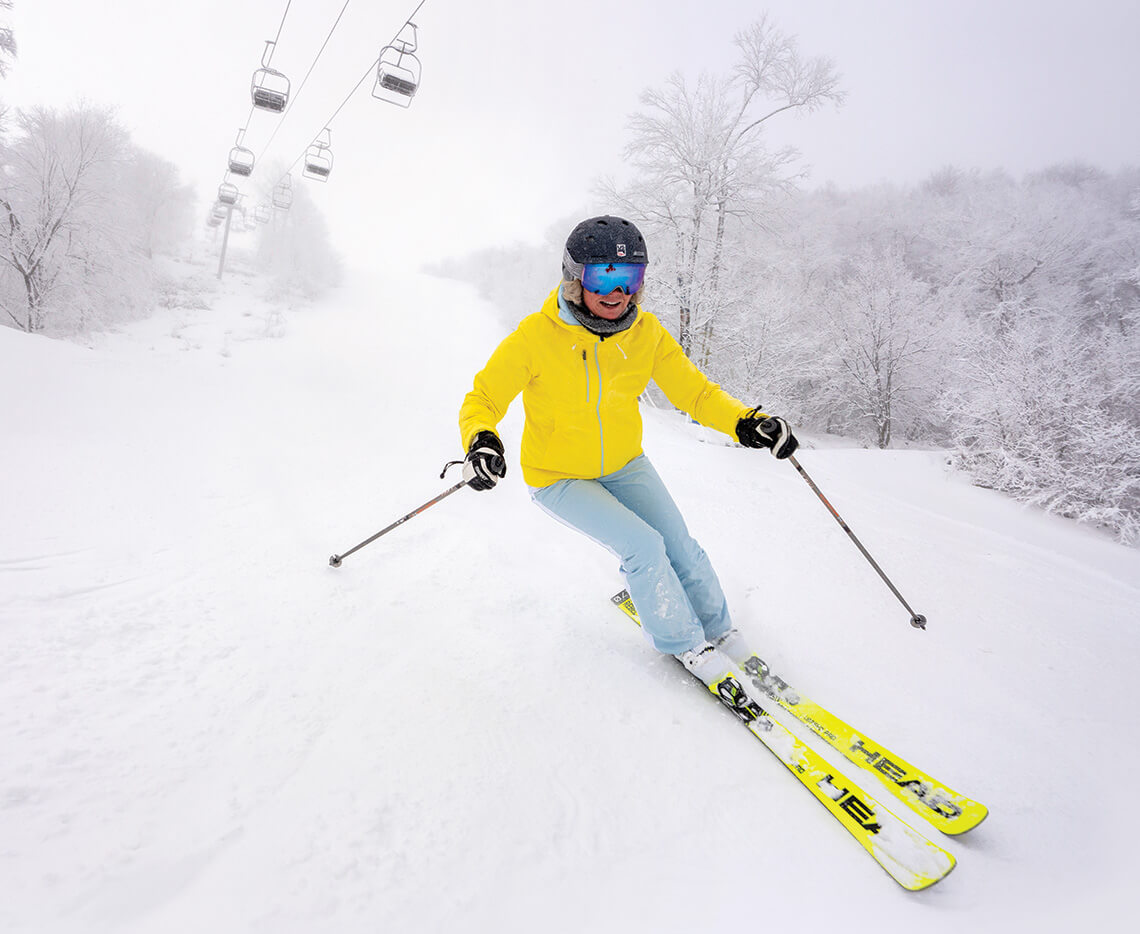 I know. It’s not fair to compare ski slope-generated snow with the glitter-globe magic of childhood memories. It’s pure snauvinism. Moreover, although my sons have grown up with at least a few Piedmont snows most winters, I do fear for a world where snow is in short supply. So it’s a comfort that snowmakers like Gunther Jochl and Dave McManus are on the job, keeping skiers on the slopes and piling up 10 feet of soft base to cushion them when they go astray. One day, maybe my sons will ski themselves, and go on skiing trips with their crews. If they do, they’ll surely have a few unforgettable wipeouts. And maybe a picture or two and memories that will last a lifetime.

Ready to hit the slopes?

We talked to three experts to find out their best tips for winter-sports beginners and what makes North Carolina ski resorts so special. Visit ourstate.com/osknowsbest.