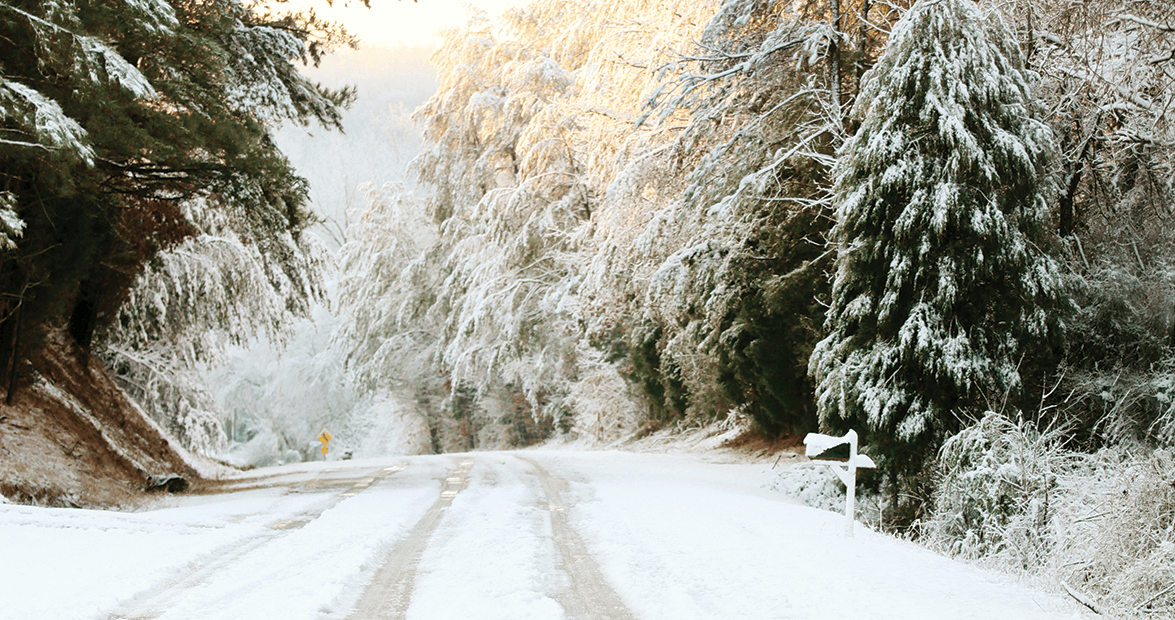 My husband and I have a prenuptial agreement based on weather. I can’t live anywhere east of Raleigh because I need snow. I love snow. I crave snow. Or as John Whittaker Watson (1824-1890) put it: “Beautiful snow! It can do nothing wrong.” This adoration — nay, obsession — does not make me popular with a lot of North Carolinians. “Satisfied?” my anti-snow friend will snarl over the phone on day three of a big snow. My friend is originally from Florida, but I give her a pass because her grandparents lived in North Carolina and when she visited every Easter, she boarded the plane going home carrying live dogwood boughs. Moreover, she’s also on record as having said as a child, “The only thing I want to do when I grow up is marry someone from Greensboro and go to First Presbyterian Church.” Which she did and does.

Myself, I’m a little religious when it comes to snow. “Amen,” I’d say after my prayers every night as a child, and then, no matter the season, I’d add, “And please make it snow.” My bedroom window was just to the left of an outside spotlight, and during winter, if the forecast included the slightest prediction of snow (and it seemed like it was always snowing in West Jefferson), I’d get up throughout the night, sneak into the hall, turn on the spot, and check for those magical, illuminated flakes. When it finally began to snow, I continued my one-sided conversations with God, praying, “Please don’t let it stop.” Of all the Laura Ingalls Wilder books, my favorite was The Long Winter, which took place in Minnesota. I’d always longed to be Laura anyway — who didn’t? — but Garth Williams’s illustrations inspired even greater envy. I wanted to ride in a carriage over a frozen lake. I wanted a buffalo robe over my knees. In a blizzard, Pa Ingalls had to use a rigged clothesline to find his way back to the house from the barn. It boggles the mind here in North Carolina, where the only weather we need to claw our way through blindly is humidity.

Even the word’s single syllable is friendly, lovely: snow. Soft and gentle and lilting: snow. The pronunciation brings a pretty form to the lips: snow. Not fractured and grating and multisyllabic like hurricane and tornado.

When I teach writing, one of my first lessons is always to write a thing down — an experience, an emotion, a detail — when it happens, or you’ll lose it. Naturally, I use snow to illustrate this theory. If you don’t write down what snow looks like while it’s happening, then when you’re writing your novel in July, you’ll end up with the same old cliché: blanket of white. On those expectant days in January and February, you’ve got to stand at the window and peer carefully, raptly, at black roofs of nearby houses or glossy magnolia leaves or gray tree trunks. The first flakes are instantly visible against those dark backgrounds, and you won’t have missed a single thrilling moment of a snowfall. Wet flakes accumulate first on grass. Smaller, icier, compact flakes accumulate like spilled salt in a brick terrace corner, and I open the window to the frigid air just to hear that wonderful plick plickity plick on the ivy leaves outside.

Snow has a smell. It’s the aroma of happiness. What’s not to love about snow and everything associated with it? The steady comfort of seeing flakes falling hours on end each time you glance toward a window. The surreal beauty of a transformed landscape, snug and pillowy. The ethereal peace bestowed by snow. The scent of woodsmoke from all-day fires. Popcorn. Chili. Being forced to stop, freed from the obligation to be productive. The permission to be a child again. Snow’s sparkling brilliance when the sun rises. Wading into the white with a ruler to measure the tops of car roofs and patio tables. That’s where it’s deepest because the cooler air circulating beneath allows faster accumulation. Oh, yes, I know all the science, such as the fact that newly fallen snow acts as a sound-absorbing material due to the trapped air between the individual crystalline flakes, trapping sound waves and dampening vibrations.

But didn’t we already know that snow is so very quiet, making the outdoors so gorgeously still, muffling all but children’s delighted shouts? I mostly love the poetry of snow, both metaphorical and literal. In sixth grade at Rutherfordton Elementary, we were required to memorize poems every month, and I can still recite James Russell Lowell’s “The First Snowfall”:

The snow had begun in the gloaming,
And busily all the night
Had been heaping field and highway
With a silence deep and white.

Every pine and fir and hemlock
Wore ermine too dear for an earl,
And the poorest twig on the elm-tree
Was ridged inch deep with pearl.

Finally, someone who understood me. Unlike the imported-from-New Mexico instructor at Warren Wilson College in Swannanoa who suggested to me, and the rest of the Master of Fine Arts writing workshop, that my short story, which of course included snow, was an illustration of the narrator’s death wish. Because everyone knows that in literature snow represents death. It does? Other out-of-state writers at Warren Wilson laughed at me because I carried an umbrella in the snow. (They also laughed at me when I said, “Please pass the salt.”)

I hung in there, driving around on packed snow into Black Mountain in the afternoons, gazing gratefully up at the snow-covered mountains, and reminding myself that this is my state. You can’t scare me. Year-round, my computer background is a snowy scene. I visit websites that feature snow photography. At least three paintings in our house depict snow scenes, including one of a neighborhood lake in Greensboro’s Starmount Forest and one of a snowy road in the mountains of North Carolina. When traveling in the western part of the state, I look at valleys and hills and revert to age 10, thinking Man, imagine sledding down that! I’m heartened by leaden skies, and am the only person I know who cries when the daffodils begin blooming. If we haven’t had a decent snowfall by mid-February, the odds that we’ll have a good snow begin to diminish, and as the green of spring creeps into the landscape, I grow depressed with a different kind of Seasonal Affective Disorder.

There are four phases of a good snow:

1. Watching it fall, lulled by the utter silence yet constant movement. Sitting on the sofa and doing absolutely nothing but watching it fall, trying to focus on a single flake and follow its descent.

2. Enjoying from indoors the pristine whiteness, smooth and uniform and forgiving, untainted and uncompromised by footsteps.

3. Going outside, tromping around, knocking snow from the boxwoods with a broom, measuring the snow so you can make your snow-loving brother-in-law who lives in Charlotte jealous.

4. Making a snowman. When you’ve reached No. 3, you’ve capitulated to the inevitability of the end. You’ve signed on for ugly, for bare stripes revealing muddy grass. But that’s OK, because you’re taking every ounce of pleasure available from the storm, preserving the magic for another day, the listing white blobs in the yard reminding passersby that here, fun was had.

Oh, I know, I know — the inconveniences. The work stoppages. The fender-benders. The endless newsreels. The grocery store lines. These are trifles, really, compared to the blue shadows cast on an unbroken white surface, the elongated dusk of snow days, the coziness of captivity, a midnight moon’s gleam over a white expanse, the entire romance of winter’s greatest blessing: snow.

Because in addition to all its other blessings, snow is the epitome of romance. Chapel Hill gets an average of only eight inches per year, so in college I was never able to effectively be Ali MacGraw romping and falling and floundering through the snow as she did in Love Story, even though I had one of those knitted cloches which made me look absolutely just like her. And I’m not alone in this romance. At my sister’s beach house near Wrightsville, one room’s artwork consists of three photographs enlarged to poster size. Each one portrays a scene of the beach in that true rarity, a coastal snowfall. Stilled sea oats wear white feathered hats. At the end of a planked beach path, an unadorned baby snowman no taller than my forearm is perched atop the handrail. For four decades my friend Tim has saved a letter from Georgia, the African-American woman in Burlington who essentially raised him. She wrote: I’m making cocnut pudding. We have a five-inch snow.

Here in North Carolina we’re allowed to love snow, because it’s a fleeting, temporary gift, bringing with it a chilled downy whiteness that offers both an obligatory slowing of activity and a joyful reveling. If one does nothing more than sit at a window and gaze at the softened surroundings, the mesmerizing curtain of falling flakes, the hours will have been well spent, the spirit refreshed in the dead of winter.