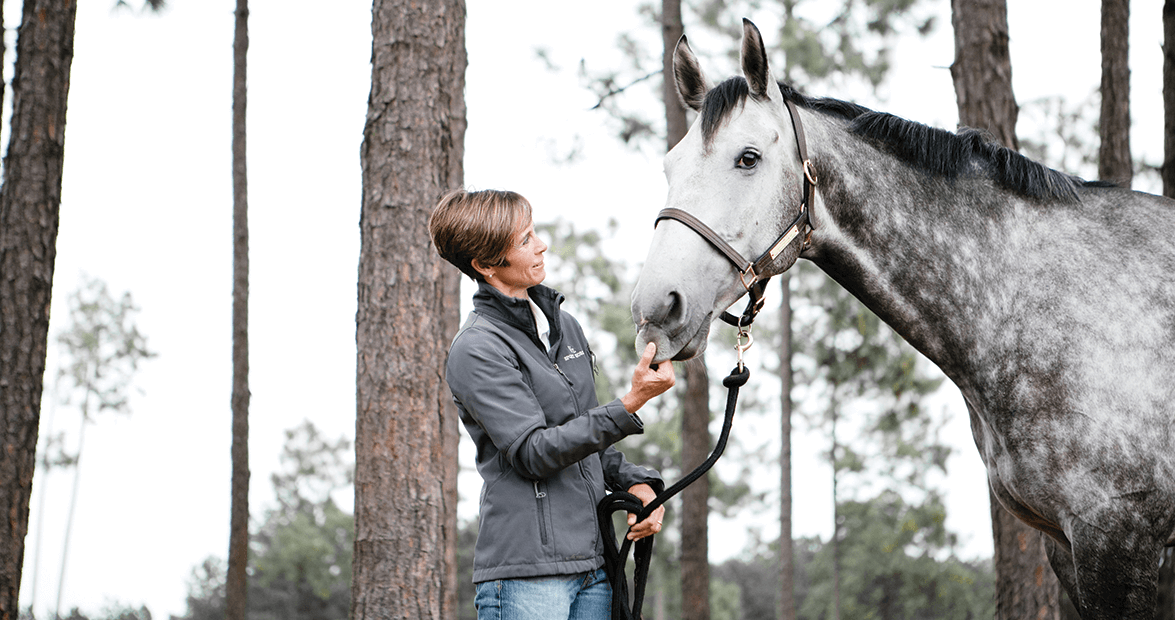 The afternoon feels sleepy and still, the grounds deserted. An immense live oak tree, an upended tripod of stretching limbs, each with a diameter larger than my torso, commands the flagstone terrace. Perhaps, though, the cats sprawled beneath, which observe my trespassing with a placid, profound lack of interest, reign supreme. “Gone Riding,” reads a painted ceramic sign on the house’s back door. As I head for the barn, fine sand finds its way into my shoes, naturally. This is the Sandhills, after all, home to Fort Bragg and legendary golf courses and Southern Oaks Farm.

“Hello?” I call. No one answers. Inside, the barn is shadowy and cool, silent but for a moist nickering, a faint clomp of shifting hooves, the white noise of whirring fans. Here is the environment, redolent with that aroma endemic to stables — the scents of straw and animal and leather — I once knew well: at summer camp, taking riding lessons in Tryon, in the barns of friends. Words like “forelocks” and “withers,” “jodhpurs” and “canter,” rush back from a time when the very language of horses carried a magical, romantic glow.

What happens to little girls with equine obsessions? The ones with the Marguerite Henry books — Misty of Chincoteague and Stormy, Misty’s Foal — on their bedroom shelves next to the collection of glass and plastic and wood and stuffed horses beside the videos of The Black Stallion, The Horse Whisperer, Seabiscuit, and The Man From Snowy River. The ones who beg for riding lessons and eventually put a pony at the top of their Christmas lists.

If they’re lucky, they grow up to be Danielle Veasy in Aberdeen, a nationally-known trainer, breeder, boarder, buyer, shower, seller, and — oh, yes, lover — of her 28 horses. Plus one donkey.

And then she appears in the dimness: tiny and thin, a pixie with a pixie haircut beneath a baseball cap, wearing a checkered shirt bearing — what else? — a horseback rider logo on the pocket. She’s leading a horse, too, which I give a wide berth, recalling warnings from decades earlier: open hand, flat palm. Only from the left side. A pat on the rump, so he’ll know you’re there. Here is a woman, I’ll come to learn, who has spent most of her 42 years with horses. 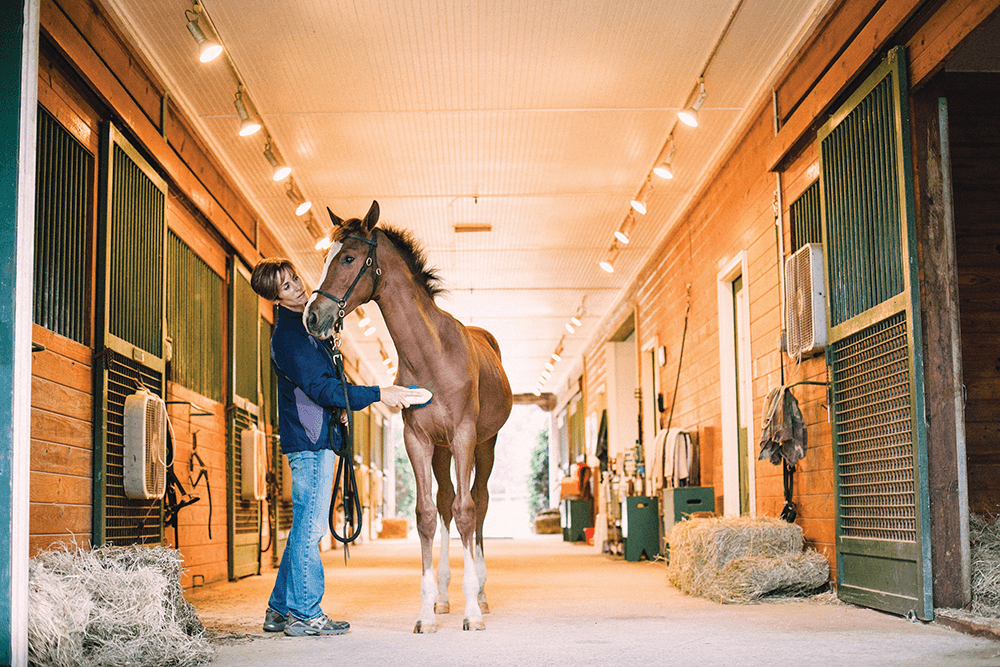 “I was that little girl,” she confirms, settling Nadia in her stall. Photographs verify the parts she can’t remember. “Here I am at 2, on a rocking horse with bouncing springs. I’ve got a fever, and I’m wearing only a diaper.”

Danielle grew up in La Jolla, California. She began her first riding lessons — a Christmas present — when she was 7, thanks to her mother fudging the truth about her daughter’s age. Danielle spent all day of every possible day at the stables. “I took a backpack with lunch and rode trails, rode bareback, made little competitions with the other riders. I took lessons with Charles Bronson’s daughter, Joan Rivers’s daughter,” she says, and admits, “I always wanted to compete.” At 9, Santa brought Danielle her first pony, Chevy. She can rattle off the “barn names” — nicknames rather than thoroughbred, or show, names — of her ponies and horses through the years: Chevy, Conrad, Henson, Hailey.

Older girls at the stable gave Danielle their hand-me-down riding clothes. “Did you have the hat?” I ask, because of course I’d wanted that hallmark of a real rider, a black velvet helmet with the chin strap. She did; on the floor, beneath a wall of English saddles on pegs, are tack boxes painted blue and white, her childhood stable’s colors, and labeled Danielle in flowing script, which attest to the years of showing. “Every weekend was a show, growing up,” she says. “My father would start out by saying, ‘OK, you can do 12 shows this year.’ But when I did well, he’d relent and agree to another one. And then another.”

Danielle asked that I visit Southern Oaks in the afternoon because she exercises horses in the morning. But when living creatures are involved, and you run a tight ship, there’s always something else to handle, so she leaves for a nearby pasture to retrieve a mare and her baby. “Only 4 days old, and the baby is in complete control,” she says.  (Wait — have we seen this before, in human situations?) The mother wants to come to the barn but, maternal-bound, will not leave her baby. The situation requires a pine bough and two people: one to halter and lead the mare, the other using the bough to “suggest” that baby move along, so the mother will follow. If the baby — long-legged as the young girls who dote on colts in movies and books and real life — suddenly sprints away, so will mama. It’s a delicate, reverse case of putting the horse before the cart, and I watch safely from the fence, along with one of the three resident dogs, for whom, clearly, this is not his first rodeo.

We sit in an interior room furnished only with a bed, a table, and a small, eye-level window with a curtain. This “foaling window” allows Danielle to keep watch over mares giving birth. (Below the window, inside the stall, are tooth marks, evidence of one mare’s habit of scraping her teeth against the wall during labor. Whatever gets one through.) Charmingly, Danielle calls horse infants and youngsters “the babies” rather than foals or colts. Southern Oaks Farm has one to two babies per year. Hence the donkey: As a baby ages into a weanling, gradually being separated from its mother, it needs someone to pal around with. The buddy system isn’t always foolproof, however. One mare became so upset about the donkey that she developed colic, and cost Danielle thousands of dollars to cure. Oh, yes, horses experience stress, and it’s expensive.

Living the dream, a Christmas wish with a shelf life far beyond December 25th, Danielle spent her junior year of high school training and showing in Calgary, in Alberta, Canada, a city famous for its dedication to the equine lifestyle. A week before enrolling at the University of Virginia, Danielle’s mother informed her, during a supposedly blow-softening trip to San Francisco, that, “You’re going to start a new chapter in your life. You’re going to UVA, but your horse isn’t.” A directive that, like some riders, didn’t sit well. Those first miserable three months at UVA constitute the only time since the age of  7 when Danielle wasn’t connected to a horse. “All I knew was horses,” she says.

But she returned, and found her niche in the university’s equestrian program (where she was, unsurprisingly, overqualified), intercollegiate riding, and eventually, racing racehorses. “All I did was ride, study, ride, study,” she says. “Six days a week, I began at 5:30 in the morning. I’d ride 20 racehorses in a day and get back to campus for one class — Spanish — because they took roll.”  But “breaking in babies” as Danielle terms it, was dangerous. These were yearlings that had never felt a saddle on their backs, and rider injuries were frequent. “Stud colts could be nasty,” she says. “In fact, one was actually named ‘Nasty and Bold.’ ” She returned to hunting and jumping, and keeping horses “legged up” —  conditioning, strengthening, and muscling the legs — even when they weren’t hunting. 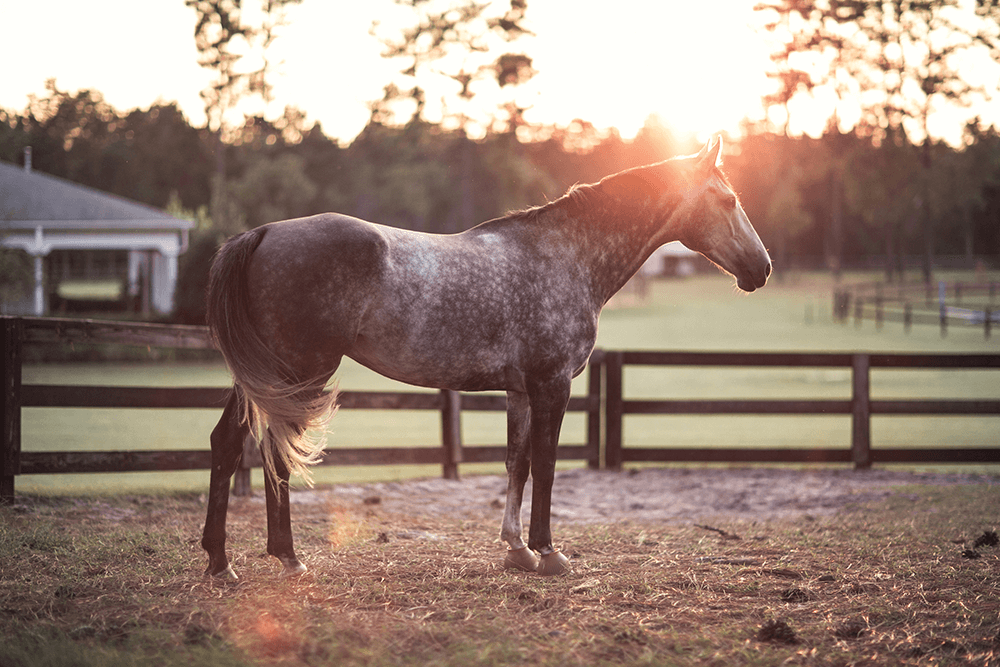 I clamber up beside Danielle in a four-wheel-drive vehicle four times her petite size, the better to navigate Southern Oaks’ 85 acres, 15 pastures, two barns, and five double “run-in sheds,” or pasture rest areas where horses can retreat from heat or storms. Danielle putters slowly, as we’re trailing a horse on a lead rope, who’d rather stay in the stable with her food and personal fan. As we pass pastures, she points out chestnuts, bays, and her favorite color, a pewter gray, named Raleigh. Here, too, are Cognac, and RC (for Royal Crown). “I’ve been on a drink naming binge lately,” she laughs, but Whitney and Versailles are hanging out as well. As is AJ the donkey, named from the play Shrek.

I’ve got my eye on Bali plodding behind us, and the scant distance between my legs and her hooves. A horse knows when you’re scared, I was always told, and I have personal experience to confirm the statement’s validity. When I was a child, a friend’s pony routinely ignored my tugging on the reins, instead heading for the apple orchard, where he cruised beneath the low, scabby branches and neatly scraped me off the saddle.

Danielle, as ever, exudes an air of calm confidence as she closes a pasture gate behind Bali. “Only the girls get to go out together. The boys play too hard. They get their own personal pasture.” She might as well be speaking of her children, which, in a way, they are. Her life is her horses. She and her husband, an orthopedic surgeon, moved to Aberdeen in 1999 from Salt Lake City specifically so she could purchase this acreage, which she’d found on the Internet. The creation of Southern Oaks has been her, well, baby. “Only the house was here,” she says, and it’s a house filled with stuffed foxes Danielle has hunted, photographs of Danielle on horses, and magnificent ribbons Danielle has won. “I give a lot of ribbons away,” she admits. People use them for ambiance in bars, restaurants, theater sets.

Danielle began her day, as she does every day, at 6 a.m., in the barn. Five days a week, she “works” horses in training. This day, she’d worked six. Then she washes them, feeds them, and grooms them. In many ways, she’s like an ER doc, always on call. She checks on two babies who are being “broke,”  takes horses to the farrier, or to be wormed, or to different pastures, or back to their stalls. Or sells them, for anywhere from $15,000 to  a million dollars. She is a natural. She is doing what countless young girls dream of.

What is it that draws a horse-lover? Is it fascination with their beauty, attachment to an animal, the allure of a culture, or the glamour of their storied lore? Is it a sport or a pastime, a hobby or a passion? “You get addicted,” Danielle admits. She even looks like a jockey, and it’s easy to see the child she was. Easy to imagine her in a hay-strewn stable, with that pony she’d begged to own, her forehead pressed to his warm flanks. Anyone who’s ever loved or longed for a horse still strains to glimpse the beautiful creature, its liquid eyes, inside a passing trailer, and grows wistful with recalling how important, how fierce and all-consuming, that yearning once was.

Danielle Veasy checks her watch and reaches for the grain bucket. The horses may be nestled, all snug in their stalls, but for the girl for whom the English nursery rhyme “if wishes were horses” came true, it’s feeding time again.