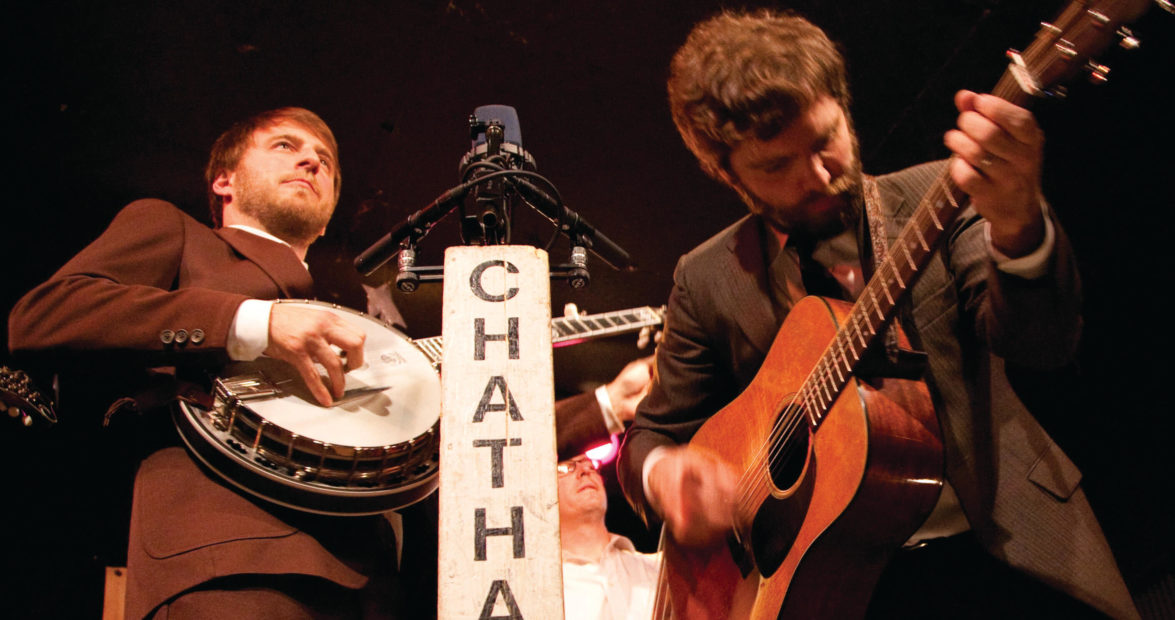 What the banjo sounds like: A child plucking rubber bands. Rain on a loose tin roof. A spring popping out of a cushion. At times, the banjo can even sound like a human voice, particularly one with a thick Appalachian twang.

More than anything, though, the banjo sounds like the South. The most American of instruments, it is singularly, proudly, and uniquely Southern — accompanied by all resultant glory and complication.

In the 1980s, when I was a boy growing up in North Carolina, the banjo seemed to be the predominant cultural calling card of dimwit hillbillies, thanks in large part to the stereotypical depictions of the “South” in any number of Hollywood products. Can’t you hear the banjo ushering the Clampetts into Beverly Hills? Remember Roy and Buck’s “Pickin’ and Grinnin’” segments on Hee Haw? Or, most unforgettably, the dueling banjos sequence in the film Deliverance, when that anemic mountain inbred stares spookily into space while he picks that twangy thing? Could anything have cemented the banjo’s late 20th-century status more firmly?

But those representations are far from accurate. Over time, like some cultural chameleon, the banjo has changed its popular identity again and again. I just happened to meet it during a particularly bad stretch. Today, it’s changed its colors yet again. Whether played by traditionalists on such albums as the soundtrack to O Brother, Where Art Thou? or by such forward-looking innovators as Béla Fleck, the banjo has become the voice of a new generation of Southerners, particularly North Carolinians.

Asheville’s new traditionalists, the Steep Canyon Rangers, have seen their national profile skyrocket after being tapped to back Steve Martin — yes, that Steve Martin — a serious banjo player himself (who just won a Grammy for his 2009 album The Crow: New Songs for the Five-String Banjo). Chatham County Line — a four-piece bluegrass band out of Raleigh that performs around one single-ribbon microphone, like a scene straight out of a 1940s Grand Ole Opry show — has seen its albums scale the charts in, of all places, Norway. Concord’s hugely popular Avett Brothers channel rock-and-roll energy through old-time instrumentation, bringing the banjo to audiences who might otherwise be more entertained by a shoe-gazing electric guitarist. But perhaps no band captures today’s evolving banjo identity more than the Carolina Chocolate Drops, an all-black old-time string band based out of Durham.

“There’s some surprise,” says Dom Flemons, banjo player for the Chocolate Drops. “But coming from this generation now in America, not from that many people. They’re listening to the music, not focusing on how I look right off the bat.”

Having signed to a major record label and toured the world (while finding time to perform on A Prairie Home Companion and establish themselves as darlings of the national press), the Chocolate Drops might have attracted some initial attention for their unique back story, but the real reason for their success is the most basic of all — it’s the music. The same reason Flemons picked up the banjo in the first place.

“I liked the sound of it,” he says. “Growing up in the Southwest, there was no cultural divide. I liked playing the instrument and playing songs I enjoyed on it.”

Now that he’s a resident of North Carolina, the geography has changed his relationship to the instrument.

“There’s a lot more associated with the banjo in the South that I didn’t have in Arizona. A lot more of a social consciousness and history,” Flemons says. “But the music itself played on the banjo doesn’t have to be related on that level. The music itself can become independent of it.”

There was a time when that didn’t seem so possible.

Descendant from gourd-bodied instruments played throughout Africa, the banjo landed on our shores in the 17th century packed in with the crowded cultural baggage of newly arrived slaves. Scots-Irish landowners who played the fiddle at farm dances soon added it to their repertoires, and by the 1830s, theaters throughout the North were billing banjo-playing minstrels in blackface portraying “life” on Southern plantations. Their popularity soared, and before long, the banjo became what was essentially a northern, urban instrument.

But despite its popularity in the heavily populated cities of the North, the banjo remained an integral part of indigenous Southern music and folk dancing. By the 1930s, as jazz and ragtime overtook minstrel shows in popularity, North Carolina’s Earl Scruggs developed the so-called three-finger technique and soon transformed the way the banjo was played. As bluegrass emerged, the identity of the banjo transitioned to one reconnected to old-time music and the South.

“The banjo comes with certain associations,” says Graham Sharp, the bearded young banjo wiz for the Steep Canyon Rangers. “A lot of music has swung back toward more traditional sounds, and the banjo is a sound that evokes another time and place.”
It’s a time and place that conjures nostalgic visions of rural family gatherings, dirt-floor dances, and simple picking on a porch at sunset. But more than bucolic images, the banjo boasts that sound. The sharp twang, the percussive snap, the stampede of staccato notes. The banjo sounds like nothing else.

A truly primitive instrument, the first banjos were made from wood, animal skin, and string pulled from gut. Even today, the instrument is strange-looking. It has a drum head. It has a neck that looks two sizes—– too thin. It has one string that doesn’t even go all the way to the top. Some have four strings, some five. Some even more than that, but it’s the five—string banjo that we think of when we hear bluegrass.

Philip Gura, William S. Newman Distinguished Professor of American Literature and Culture at the University of North Carolina at Chapel Hill and co-author of America’s Instrument: The Banjo in the Nineteenth Century — the definitive book on the banjo — says, “You can’t help but smile when you hear a banjo.”

And he’s right. It’s an instrument that’s hard to make sound mournful. It’s lively, explosive, and still imbued with some of the comic quality left over from its minstrel past. It’s still the butt of mediocre jokes: What’s the difference between a banjo and a Harley? You can tune a Harley. In fact, Scruggs’s three-finger technique — the one most often used in bluegrass playing — actually enhances the instrument’s pluck and twang, sounding a singular siren call alerting all listeners that this is an instrument cut from an uncouth swath, one spun from moxie and sass. It’s a reputation that’s hard to shake.

“The piano may do for love-sick girls who lace themselves to skeletons, and lunch on chalk, pickles, and slate pencils,” said Mark Twain. “But give me the banjo. … When you want genuine music — music that will come right home to you like a bad quarter, suffuse your system like strychnine whisky, go right through you like Brandreth’s pills, ramify your whole constitution like the measles, and break out on your hide like the pin-feather pimples on a pickled goose — when you want all of this, just smash your piano and invoke the glory-beaming banjo.”

This glory-beaming thing has been drawing more and more fans of late, its growing audience contributing to its constantly evolving identity.

“In the past couple of years, the number of people who have come to old-time music is so much more than even five years ago,” says Flemons of the Chocolate Drops. “So people are less surprised to see someone like me playing the banjo because it’s more widely accepted on a cultural level. It shows how American culture has changed and the social conflicts around the instrument have changed.”

Sharp, of the Steep Canyon Rangers, agrees that the banjo brings together people who might not otherwise cross paths.

“Once I started getting into it,” he says, “I started to see a whole subculture of banjo and bluegrass. It’s really everywhere, once you know.” This community is what kept him interested beyond the initial curiosity that drove him to pick up the banjo in the first place. “You show up at a festival, and if you have a banjo,” he says, “you can speak a whole language with other banjo players, whatever their background. It gives you access to a whole shadow-world.”

Apparently, this has been part of the banjo’s allure for years. Look no further than the 1927 Gibson Banjo catalog for confirmation: “The Gibson Banjo is the modern ‘Open Sesame’ to a world of good times, fun, and happiness.

Ability to play the banjo soon places one in position to pick and choose from scores of social invitation. Everywhere, the banjoist is assured of a hearty welcome.”

But the sound. More than the community, the history, or the look of the thing, it’s the sound that gives the banjo its power. “It’s the skip in the heartbeat,” says Sharp, alluding to the three-finger pattern played atop the basic four-four bluegrass structure. “It brings about a physical reaction.”

Flemons draws a comparison even more intense. “The banjo sounds like a freight train coming around the curve and going right into your face,” he says. “But as long as you’re not standing in front of the train, you don’t have to be afraid.”

Maybe so. But here’s what the banjo really sounds like: a cascade of sharp and wavering notes plucked out of this region’s past and sung continually into its present. It’s the weird, complicated, beguiling sound that’s ours and no one else’s. It’s the unmistakable sound of the South.