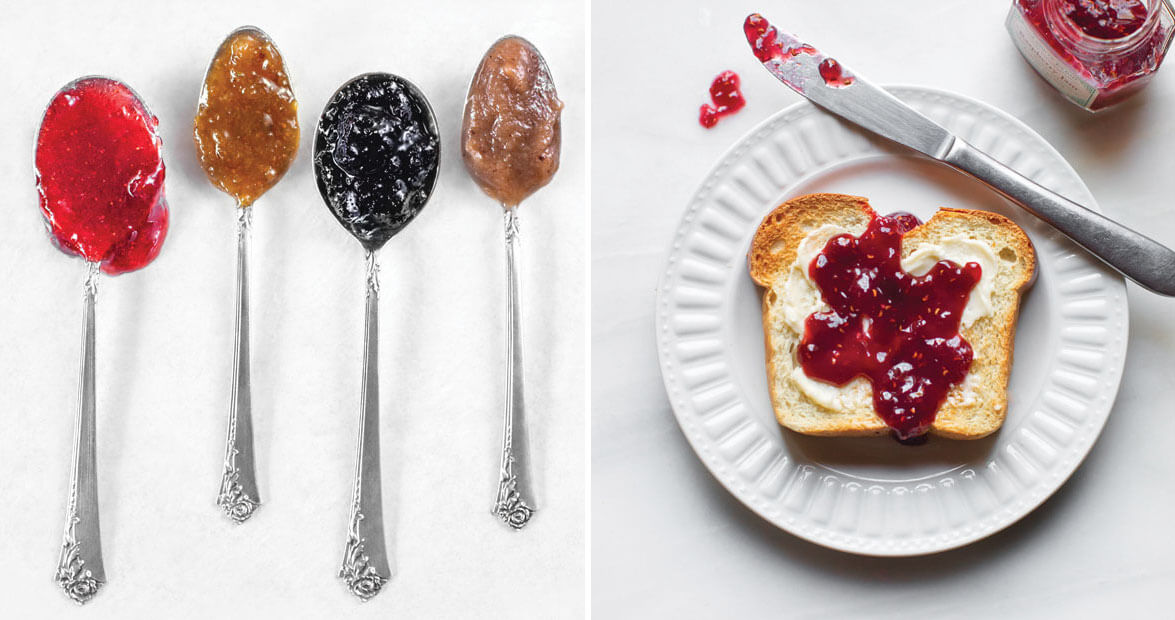 Editor’s Note: This story was originally published in January 2019.

One does not live by bread alone — or, at least, I sure don’t. Once I’ve scored manna from heaven, I can hear it begging to be crowned with ruby red raspberries in glistening preserve, luscious lapis-hued blackberry jam, or a schmear of cream cheese set with a dollop of emerald green hot pepper jelly. Such gemstone hues would seem to be the reason why a pair of mother-daughter jam-makers from North Carolina decided to call their small-batch business Garnet Gals. In the right light, a proud row of their jars — white peach with basil preserves, beet marmalade, and spicy red pepper jelly — looks like a cache full of jewels. But gleaming metaphors aside, the company name actually refers to a gem of a woman, Garnet Spencer, the mother of Andrea Lambert and grandmother of Megan Lambert, co-owners and pot stirrers.

“Garnet taught me to cook a couple of things — biscuits, short ribs, spaghetti — but she wasn’t really into cooking,” Megan says with a laugh. “I don’t remember her putting up things or making preserves, but Mom told me Garnet used to make plum jam because she had a plum tree in her yard.” And that’s how jam-making usually starts: A fruit tree or berry bramble happily takes up residence someplace, and before you know it, the nearest home cook has a new passion. 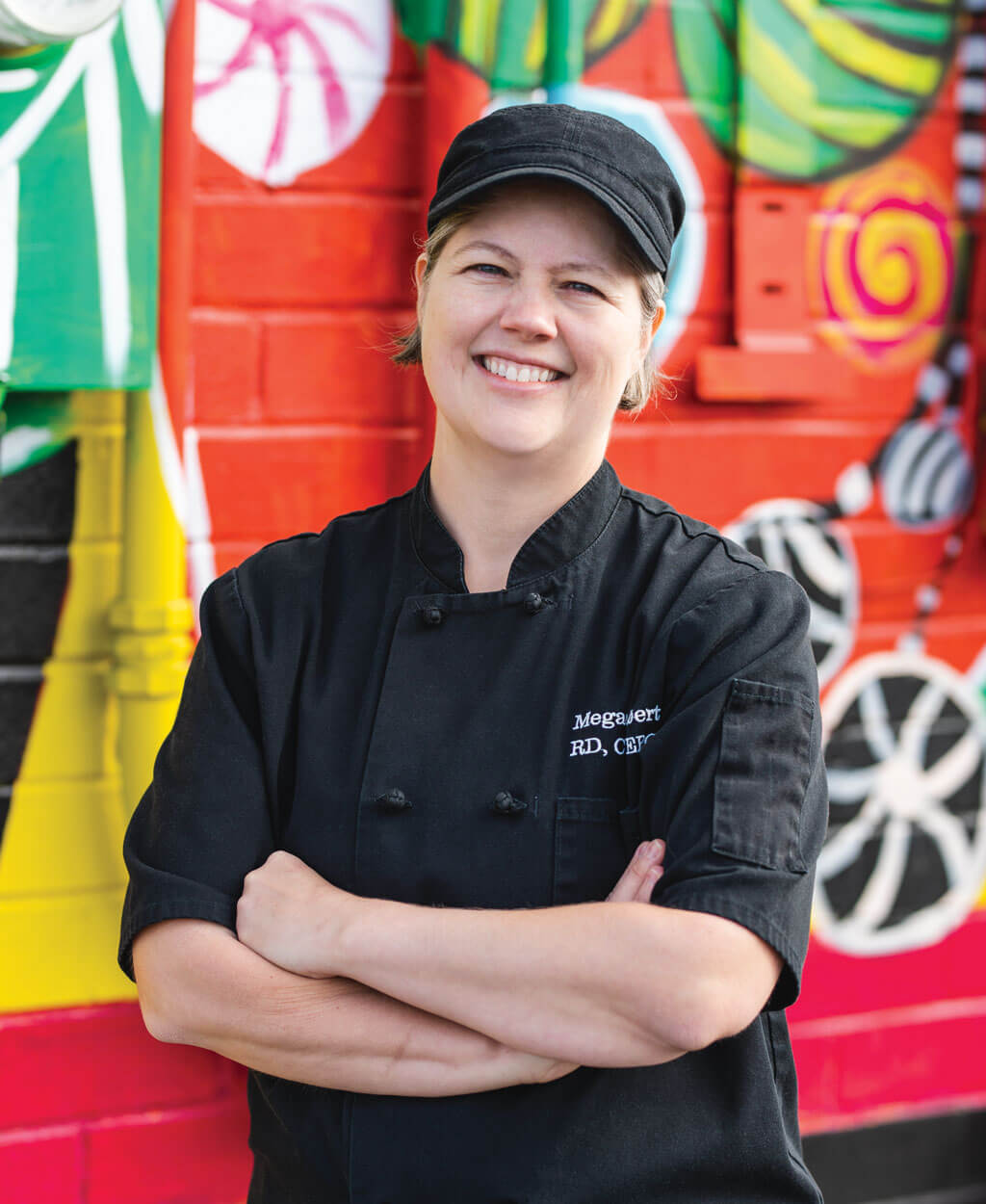 Putting up summer’s bounty to be savored in the dead of winter was more than an art form for rural home cooks in earlier times: It was how they survived. Even so, different fruits and ways of eating required different techniques for preserving seasonal produce. Jelly is often made with the addition of pectin (naturally occurring in all fruits in varying levels) to create a clear, spreadable condiment from strained fruit juice. Proper preserves have pieces of fruit densely suspended in jelly-thick juice, while a jam’s fruit has been coarsely mashed and cooked in its juice to a chunkier consistency. Butters of mashed apples, peaches, pumpkins, or squashes were almost always spiced. A compote — pieces of fruit suspended in a syrup, sometimes with nuts — was often used as a dessert topping or served alongside meat, rather than spread on bread. And a conserve? Well, in my house, that was something people from “off” ate.

Such delectables weren’t always just for the family, either. Chapel Hill-based food historian Marcie Cohen Ferris writes in her book The Edible South that homemade preserves were often traded for goods from merchants or farmers, or given as payment for help with chores. In the 1920s, female extension agents encouraged farm women to sell their jellies and jams, along with eggs and baked goods, at farm stands for extra cash. The roots of North Carolina’s vibrant canning and preserving tradition run deep and straight, which is why we’ve got more great jams in this state than you can find at MerleFest on a Saturday night. But the branches cultivated by contemporary jam-makers often take surprising and flavorful twists.

Garnet Spencer may have been a one-jam woman, but in subsequent generations, her fruit-preserving gene only grew more dominant. “I’ve been making jams and giving them as gifts for a long time,” Megan says, swirling a giant whisk in a soupy vat of berries. “But I can’t remember exactly why we decided to do this as a business.” Since 2012, she and her mother have been too busy making jams, jellies, and preserves to dwell on the recent past. Their forward-thinking mind-set is another quality passed down from namesake Garnet: “She was a character, for sure,” Megan says. “A really tough lady. Her nickname was The Rock; she had a no-nonsense kind of attitude. She was a hairdresser and had a shop in her house. She was an entrepreneur.”

Megan and Andrea had a bakery in Morrisville for four years in the early 2000s, before selling it. Megan attended the pastry program at the Culinary Institute of America at Greystone. When Johnson & Wales opened campus in Charlotte, she took a job as a baking science teacher, then moved into other baking courses. After getting her master’s in nutrition, she primarily teaches that subject now.

Adding a boutique jam-making business to a teaching career seems only fitting for the family legacy. And the concoctions that Megan now cooks up are as daring as they are delicious. Take her beet marmalade: “I was just doing some reading about marmalades and read that it’s candied fruit suspended in jelly; it doesn’t have to be citrus,” she says. “We had some great muscadines, so I made the jelly for candied beet shreds.” She serves it alongside a tangy blue cheese. “Now I’d like to try a sweet potato marmalade, but I haven’t gotten around to it yet.” Unexpected combinations are her specialty: plum butter with a dash of subtly exotic cardamom, for instance. “I just kind of think about flavors that work together,” she says. “I feel like the white peach-basil is a nice complement to a savory dish.” 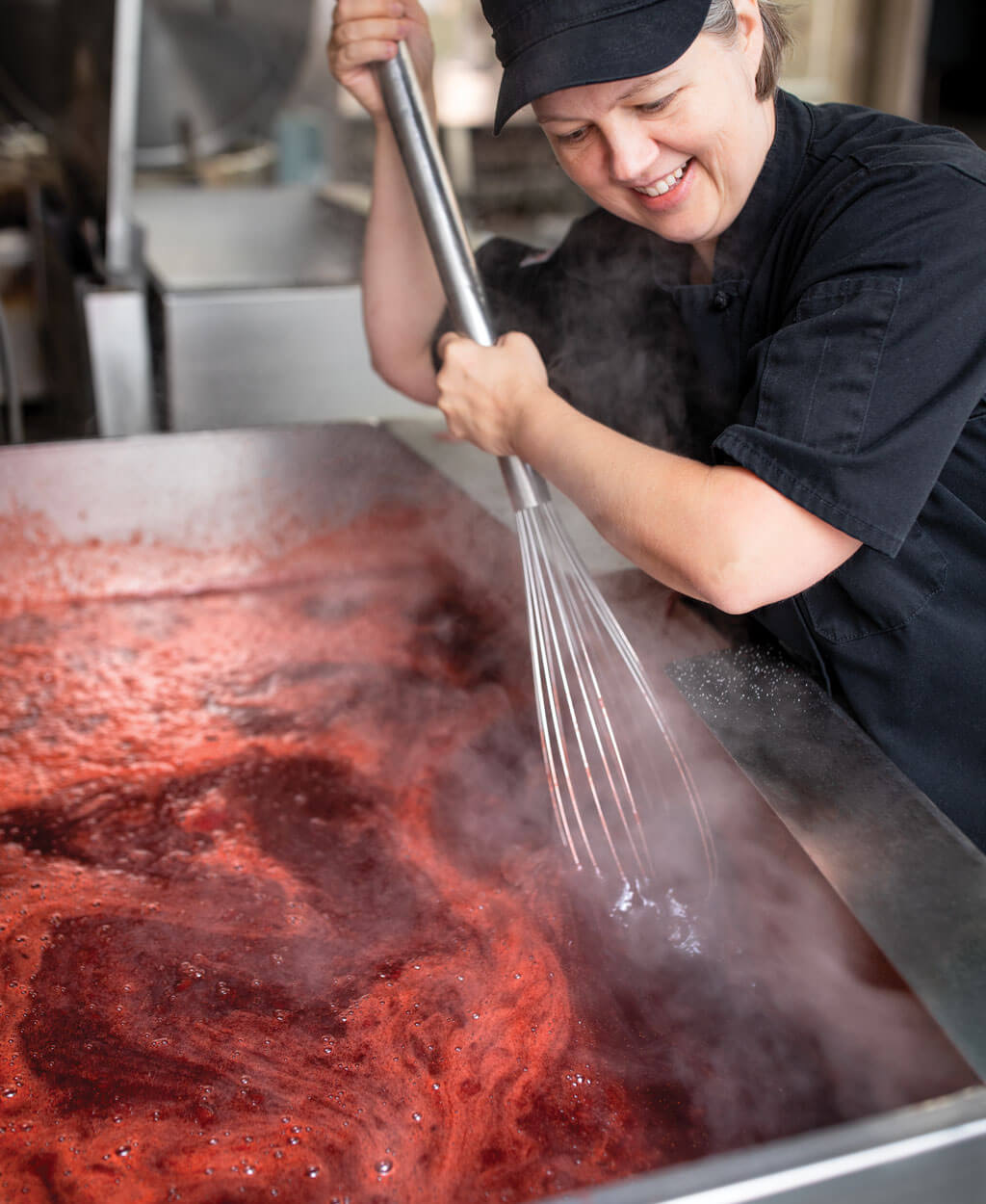 Inspiration springs from the seasonal ingredients that the Garnet Gals buy from local farms, including plums from Barbee Farms and peppers from Green Meadow Acres, both in Concord; ginger and herbs from Windcrest Farm in Monroe; hibiscus from The Chef’s Farmer in Shelby. When the gals have a big batch to prepare, Megan rents the commercial kitchen at Friendship Trays in Charlotte, a meals-on-wheels program where she teaches as a volunteer. Most of their small-batch cooking — all of the butters and wine jellies for Dover Vineyards in Concord — is done in Andrea’s inspected and certified home kitchen in Sanford. And that, Megan says, is why she and her mother pay homage to Garnet in their name: “Striking out, doing your own thing — that’s purely in keeping with her spirit.”

It was another grandparent, C.B. Harrill, who planted the (literal) seeds of another great small-batch jam company in North Carolina. And it was C.B.’s grandson, Walter, who almost scotched the concept of Imladris Farm’s spreads before it started.

C.B. planted a hardy mountain blueberry patch at his homestead on Little Pisgah Mountain in 1955. He ran it as a “you pick” operation that provided him with the little cash he initially needed to stay in his one-room house. When Walter and his wife, Wendy, moved back to the nearby farmstead that Walter’s family had owned for five generations, they increased C.B.’s cash flow by picking the berries themselves and selling them at local farmers markets. The blueberries sold so well that they soon planted raspberries and blackberries to extend the season. Then Wendy got an idea: If they turned those berries into jam, they could make a much higher return.

“And I infamously said, ‘That’s a foolish idea,’” Walter confesses. “See, in my family, we didn’t buy jam. We went to my grandma’s or to my aunt’s and asked, ‘Do you have any of that great strawberry preserve left?’ And she’d go down in the root cellar and come back with a jar or two.”

But Wendy persisted, and soon Walter was selling their locally sourced, organic jams hand over fist at an outdoor kiosk in downtown Asheville. It turned out that not everybody had a grandma with a jam stash, but plenty of folks wanted those good flavors. Not long after he’d set up shop, Early Girl Eatery opened nearby, and the owner put Imladris jam on every table for their wildly popular breakfasts. All of this was in 2002, and soon the sparkling Imladris jam jars were stocked in specialty markets and de rigueur tableside for any Asheville restaurant worth its biscuits.

The business has outgrown those early berry patches, but, like the Garnet Gals, Walter and Wendy source their produce locally, helping support local farms, including Tim Hayes in Grassy Creek, Stepp’s Plants, Etc., in Flat Rock, Creasman Farms in Hendersonville, and Wilson Farms and Greenhouses in Fairview. The Imladris line is straightforward, relying on the quality of the produce and the care in slow, small-batch production to make intensely flavorful preserves. Their Berry Best Jam is a vibrant medley of counterpoint and harmony on the tongue. Their signature apple butter uses at least three different varieties of apples to balance tart and sweet flavors.

Walter proudly acknowledges that Wendy’s “foolish” idea has allowed them to stay on the family land with their now college-bound son, Andy, the seventh generation to work on the farm. “I am so very proud,” Walter says with a laugh, “to have been so very wrong.”