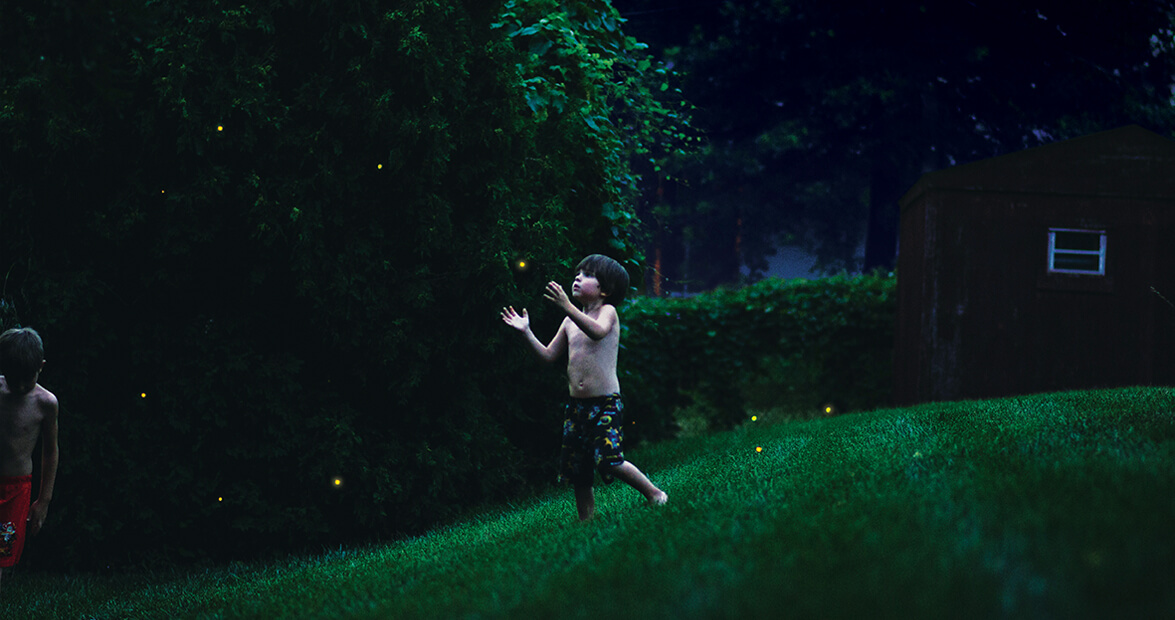 On summer nights, when the grown-ups got lazy on the porch or patio, the twilit yard belonged to the children. Your parents had shooed you away from the candles, where you’d dipped all 10 fingers, one by one, into the hot liquid wax, blown them cool, then carefully peeled away the fragile, perfect-fit caplets, vaguely rough on the insides with fingerprint whorls. Fathers had punched the lids of peanut butter and mayonnaise and Mason jars with an ice pick for lightning bugs (I don’t know where they say “fireflies,” but not in North Carolina), and you’d caught your limit. You were sticky with Popsicle or watermelon juice, but the sweet-seeking bees had gone to bed; bare feet were safe in the clover.

You lay down in the grass — later, you’d itch, but it was worth it — with limbs stretched wide and still, and looked at the stars and moon. But mostly, you waited to feel the earth spinning. It did. You knew from school that the earth spun, and now it was, right beneath you, rolling on.

Then it was time for bed, and while you read, you rubbed idly at the skin underneath your anklebone because you went swimming every day, so baths were less than frequent, and somehow, a layer of dirt collected there. Finally, there was the low, comforting thrum of the attic fan outside your room, where you slept on top of the sheets because it was too hot for covers.

Decades later, the grown-up pleasures of summer nights are scarcely different. Your feet are still bare, toes dug into the furred belly of a sleeping dog beside your chair; there’s still a canopy of tree limbs overhead, and something in a jar, but it’s something liquid now, not flashing and flying. Or, instead of spread on grass, your legs are hiked to the railing of a porch at a beach house, lake house, mountain house, farmhouse. The nasal tones of the organ at the baseball game downtown are faint, but definite, and the cicada song that made you homesick at camp is now a comfort. The night, if you’re lucky, is soft and velvety — in feel and color — and the only active living things are moths batting at the screen, though you’ve yet to ever again see that startling, ethereal luna moth of your childhood: corn-husk green, with soft brown blind eyes on its enormous wings.

Talk is idle, of supper’s stewed corn and sliced tomatoes. The scents of mint and basil waft by now and then, along with the aromas of someone-down-the-street’s grilled steak. You can’t see the stars quite as well as a 9-year-old, but there’s that expensive telescope you got one birthday on its tripod in the closet with all the winter coats …

Then again, it’s too much trouble to stir. There’s always the moon to gaze at, and besides, you can see falling stars that you never could as a child, because you have the patience to wait.

People seem to stay up later on summer nights. Couples push strollers and children call to each other till 9. Finally, though, you rise and venture indoors, switch off the AC, raise the sashes, and prop a piece of kindling to keep that one stubborn window up. Because it’s grown cool enough to, as your mother used to say, “open the house,” and let in the still softness of a summer night.