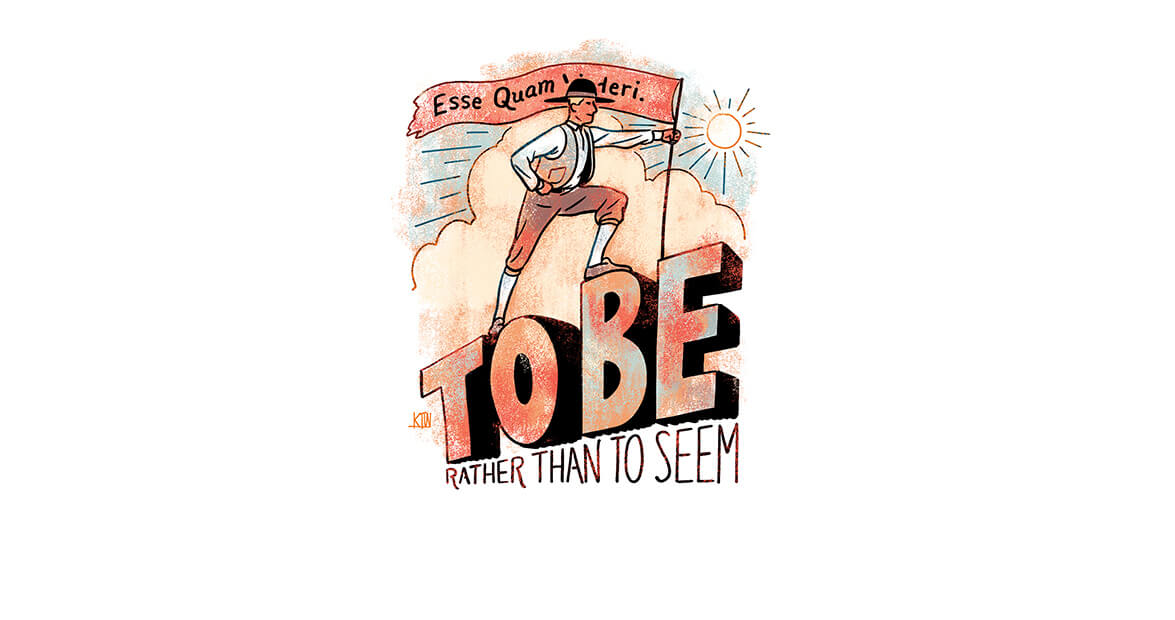 I know a woman who knew a woman notorious for prefacing the majority of her thoughts or opinions with the phrase “I feel as though …” The woman I know and I both adopted the phrase in a manner that might be described as ironic. I used to call the woman up and ask if she wanted to go to a movie, and she would reply, “I feel as though, no, I do not.” Or we would be sitting on my front porch swing during a late afternoon mid-summer Piedmont gully washer, and my friend would state quietly that she felt as though it might perhaps be raining.

The friend of my friend who felt as though this, that, or the other was not a North Carolinian, and it is fitting that she is not, given the NC state motto: Esse quam videri. To be rather than to seem. We North Carolinians don’t feel as though anything; we feel things or we don’t. And we will tell you about it, rather than telling you that it may perhaps somewhat be something that might well have crossed our minds.

Esse quam videri was the first Latin I ever learned. I knew it before I knew E pluribus unum, which I discovered on old coins minted before the nation changed its motto just three years before I was born. I knew it before I learned to say, after an argument with my siblings carried to the brink of dyspepsia, ad nauseum. Bona fide, carpe diem, ergo, even et cetera — those Latin phrases so commonplace in our daily usage all came to me well after my familiarity with a phrase that, had I not been born a Tar Heel, would have surely been obscure.

Could it be that I was born knowing it, just as I was born knowing the difference between Carolina blue and Duke blue (and how to always favor the former)? It certainly seems that way. But for some years my mother taught Latin at Jordan-Matthews High School in Siler City, and later, when we moved Down East, she attempted to corral the youngest of us around the dining room table to instruct us in the rudiments of Latin. I had not yet mastered a living language, much less one pronounced dead, and I learned just enough Latin to occasionally give me an edge on the crossword puzzle. I don’t remember her teaching us the meaning of Esse quam videri, probably because, to her mind, it was not something you have to sit around the dining room table to learn.

Esse quam videri was adopted as the state motto in 1893. That North Carolina was the last of the original 13 colonies to come up with a state motto is only further testimony of our tenacity, right down to the words on our flag. We would rather be precise than seem so. I like to think the phrase arose out of our unofficial nickname: Tar Heels. There are several theories as to the origin of the term Tar Heels, most of which, being pejorative in nature, were bestowed upon us by Yankees. The only explanation that does not merely seem plausible — the only one that rings with the truth of being — is the one that claims our troops held ground during a certain Civil War battle while regiments from lesser states fell back. We did not seem to be holding our ground. We damn well held it.

The phrase is most commonly attributed to Cicero’s essay “On Friendship,” though it has also been traced back to Aeschylus. Its adoption took place in a time when learned men — and those few women who were allowed to be learned — were as fluent in Greek and Latin as today’s teens are in text-speak. R U 4 real? might be the textual translation of our motto. We North Carolinians R 4 real because we know not how to appear to be real.

Of course to the nonnative, it might sometimes seem that we say things we don’t really mean. I know many the transplant who has been insulted by the phrase “we need to have y’all over to the house,” after which years passed without a formal invitation to dinner. But I believe that, according to decorum, we are actually being nice. It might seem we are only pretending to be hospitable, but the truth is, you can’t have every snowbird over to the house for pot roast, especially these days when it seems that half of Buffalo has decamped to Charlotte. But if these outsiders stick around long enough, we will eventually get around to asking them over to grill out in the backyard.

As much as we may seem to favor indirection and hyperbole, we can, in fact, be nobly literal. For instance, the argument by a certain Midwestern state that they hold the rights to the term “First in Flight” because the brothers who first took to the air in a winged creature and lifted from our most storied dune were natives of that state up north  only seems to hold water. The airplane might well have been conceived of and designed in Ohio, but the heavenly winds did not deign to lift it from some cornfield outside of Dayton.

But that is an argument that North Carolinians do not stoop to acknowledge. If Ohio would like to feel as though they got there first, let ’em. It does not bother us at all that denizens of other states mistake believing in something for being something. When you are, rather than seem to be, there is no reason to compete.