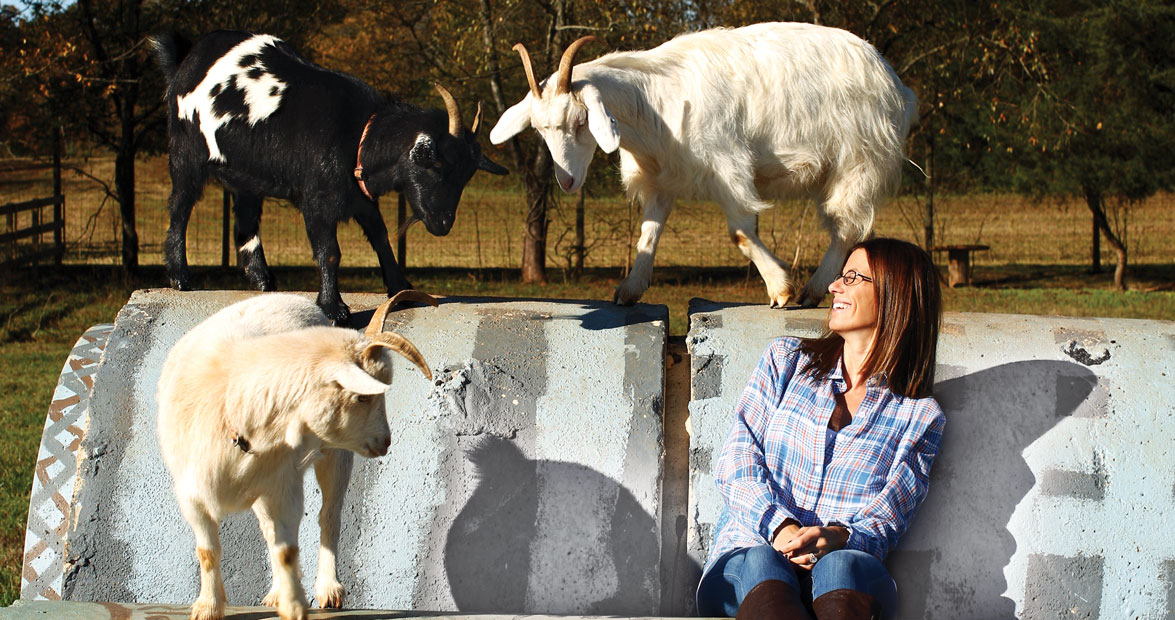 Hank, a rotund Flemish giant rabbit, galumphs across a classroom floor to the giggles of the elementary-age Critter Campers who are spending the day at Rescue Ranch near Statesville.

Hank was the first of some 57 displaced animals — from snakes and guinea pigs and chinchillas, to hedgehogs, goats, and giant lizards, to prairie dogs and miniature horses — to find a home at this Iredell County sanctuary founded by Krissie Newman and her NASCAR-driver husband, Ryan.

And it all began with a fan letter. 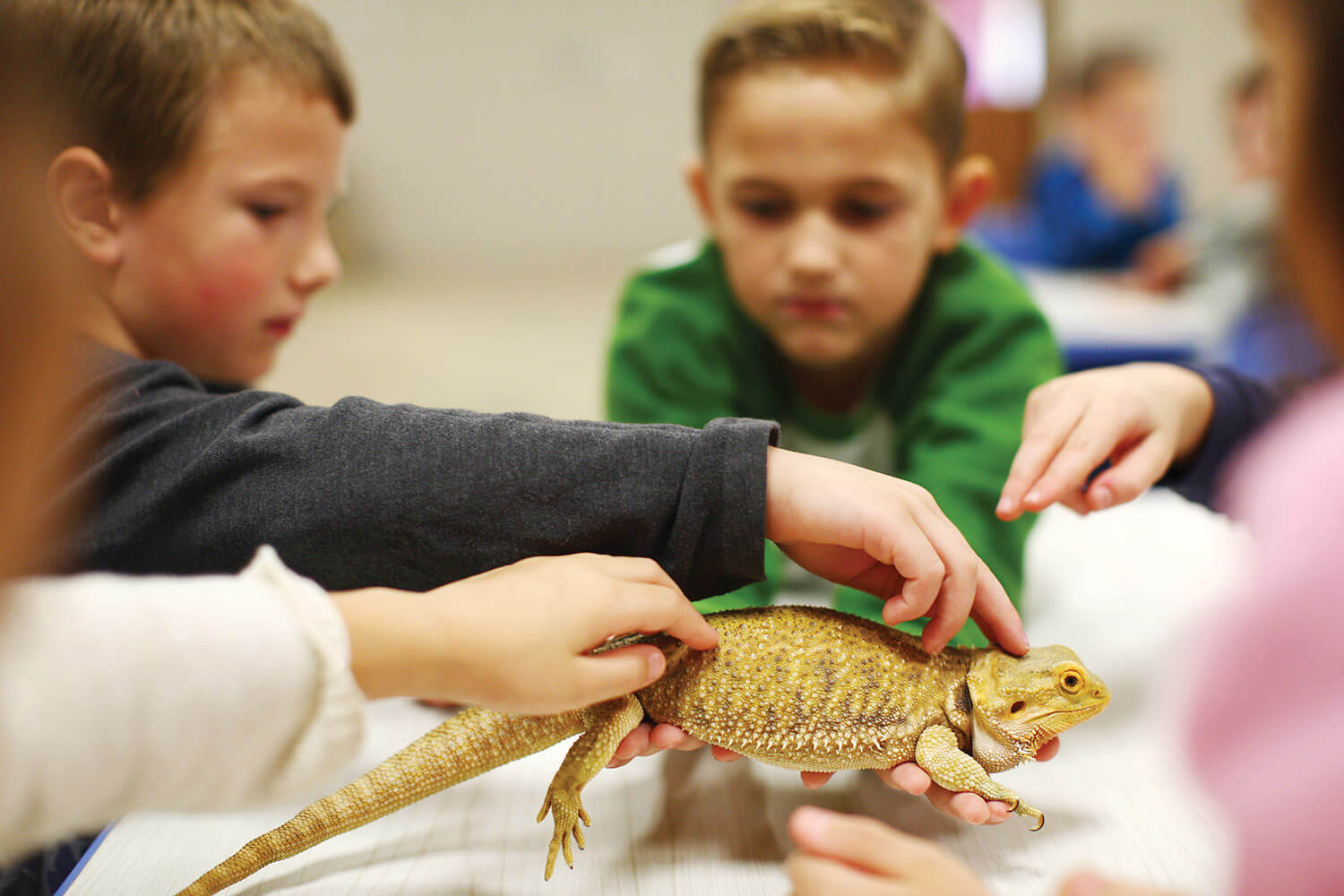 Don’t be fooled by the tough skin: This bearded dragon’s name is “Mushy.” Here, she gets some love from children visiting Rescue Ranch’s education center. photograph by Travis Dove

“We were in Martinsville, Virginia, in October of 2004, when this girl came up to me and handed me an envelope with a letter inside and some pictures,” says Krissie, president of Rescue Ranch.

She thought it was fan mail for Ryan, who drives the No. 31 car for Richard Childress Racing out of Welcome. But when Krissie opened the envelope, the contents made her head for the grandstands in search of the teenager who’d given it to her.

The letter was about a dog that the family had taken in. The dog had gotten pregnant and had puppies, and the family was trying to find homes for the puppies. “The family had 15 dogs at their house,” Krissie remembers.

“The letter was simply asking us to help their county, and people like them in the area who cared about the animals, but had no means to find them homes,” says the Ridgewood, New Jersey, native, who was raised in Vernon, North Carolina.

Krissie found the teen. She later met the family, paid to have the animals spayed and neutered, helped to adopt out 11 of the 15, and helped pay for the four dogs that the family kept.

That was the beginning of Rescue Ranch.

“With Ryan’s reach through the NASCAR fan base, I knew we could make a difference for animals in North Carolina,” Krissie says.

And that’s just what they did. In 2005, the Newmans formed the Ryan Newman Foundation, which focuses on ending pet overpopulation through animal rescue, adoptions, spaying, neutering, and education. During the same year, she and Ryan helped with the adoptions and care of many abandoned and injured animals during the Hurricane Katrina relief effort. For Krissie, who majored in criminal justice at Shippensburg University in Pennsylvania, this became her life’s calling.

“We started looking for some property that was close to where we live,” Ryan says. The Newmans purchased acres of meadows, trees, and meandering creeks located minutes down the road from their home. In 2013, the dream became a reality.

Animals at the ranch come from all over. Two steer, Chick-fil-A and Oreo, were surrendered by their owners in Jacksonville, Florida. The exotic lizards, including an uromastyx named Jabba the Hutt, came from a volunteer who had to travel for work. Some of the Alpine goats came from folks who were considered “hoarders.” Two chinchillas, six goats, and two miniature horses are from Greensboro’s Red Dog Farm Animal Rescue Network.

The ranch, which has a full-time staff of six and about 100 volunteers, features outdoor classrooms with hiking trails. “We can show kids the difference in temperature from up on a hill to down in a creek, things they’d never learn in a city,” Krissie says.

She has ambitious goals for Rescue Ranch: a 24/7 emergency vet clinic with vets of various specialties — radiation, chemo, acupuncture, and hydrotherapies. She also plans to work with Mitchell Community College and other colleges around the state to help students get intern hours.

Ryan, who has a degree in vehicle structure engineering from Purdue University in Indiana, adds, “This is only 10 percent of what she wants in the scheme of things.”

Exotic birds squeak and squawk, and large lizards preen inside the education center classrooms. Meanwhile, Stone, a Crawl Cay boa constrictor, wraps its body around Krissie’s wrist and slithers up her arm toward her head. She suggests that people touch the snake, feel the softness of its skin. “I have more teachers who are afraid of the snakes than the kids,” she laughs.

“I’m doing this because of my love for animals, for the compassion I have for them,” Krissie says. “Did you ever read the book The Purpose Driven Life? This is my purpose. I was meant to do this.”