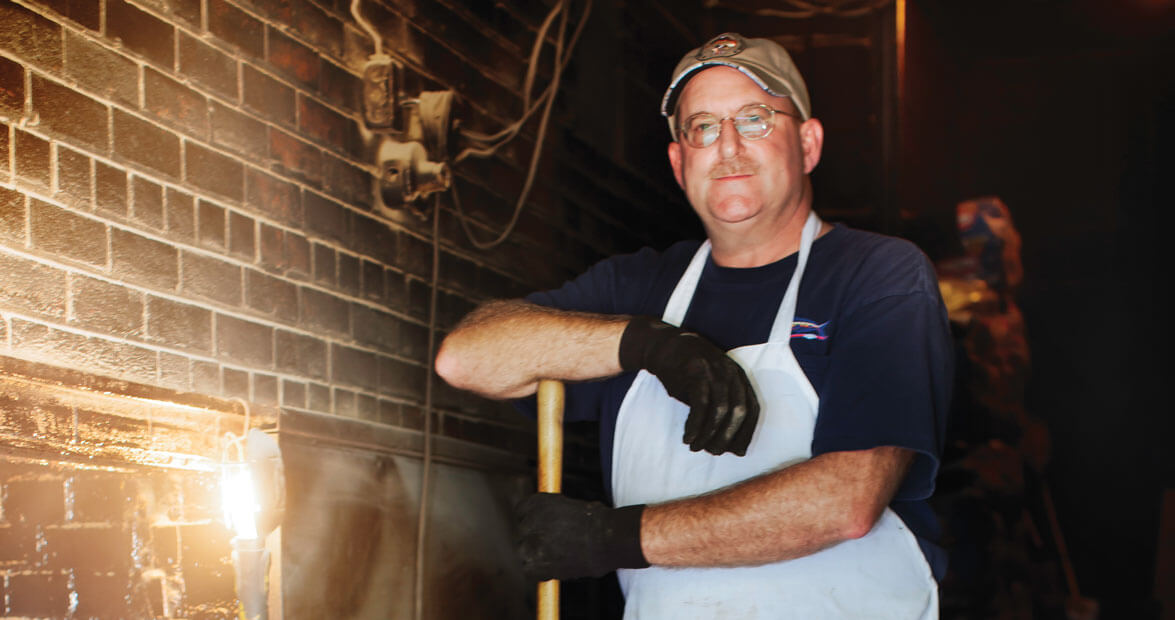 Paul Stephenson grew up during the Great Depression on a hundred-year-old farm in Johnston County, where he turned the earth.

Paul eventually quit fighting with the sandy soil, though, and switched to raising shoats. He earned a reputation for quality, but he was surprised one day when a man stopped by to purchase 14 big hogs.

“Pig was selling for just 11½ cents a pound back then, and Daddy asked the man what he was going to do with all of it,” recalls Paul’s son, Andy Stephenson. “The buyer said he was taking them to the ‘barbecue man.’ Daddy thought about that a bit and then he said, ‘How many sandwiches do you get out of a hog?’ ”

The math seemed simple enough. If a 100-pound pig sold for $11.50, and a three-ounce barbecue sandwich sold for 35 cents, then Paul could make a handsome profit.

“That was the end of Daddy growing pigs,” Andy chuckles, sitting at a plain, white table inside Stephenson’s Barbecue. “Daddy saw an opportunity. He figured he could do a better job of feeding his own family if he cooked and sold barbecue than if he raised hogs. He decided he’d be the barbecue man.”

How it was in the beginning

The restaurant first opened in 1958 in Willow Spring, in western Johnston County, on a piece of farmland.

It didn’t take long for Stephenson’s to attract a crowd. The tantalizing aroma of pork smoke, which usually fragranced the air only in early winter during annual hog killings, now tempted folks every day.

“Farmers are curious,” Andy says. “They’d come up here to see what was going on, then they’d come back with the family.”

Andy took over the restaurant when his father passed away six years ago. The rest of the family helps, too. Andy’s wife, Lynn, and their daughter Amber manage inside operations. Their teenage son, Andrew, keeps the grounds tidy. And their youngest, Alyssa, rolls silverware in napkins and waits tables.

Listed on the North Carolina Barbecue Society’s Historic Barbecue Trail map, Stephenson’s serves about 600 meals a day. Most come with sides, like hush puppies and savory collards, that were developed decades ago by Paul’s wife, Jean, who was a longtime home economics teacher.

Although Jean knew her way around a kitchen, Paul didn’t know much about cooking barbecue. With Jean’s brother, Charles Roberts, he cooked a split hog over a dug pit before Stephenson’s opening day to be sure they knew how to do it right. They did.

What is, and isn’t, barbecue

Stephenson’s smoked meat with hardwoods until the mid-1970s, when the energy crisis led to a spike in wood prices. Ever since, they’ve cooked with hardwood charcoal.

“I believe you can cook slower with charcoal, and you don’t have to check it as often as wood,” Andy says from inside the pit, as he pokes a bed of hot embers with a flat-head shovel. “A lot of people these days are turning a knob [for gas or electric heat] and going to bed. To me, that’s not barbecue.”

One of the few menu changes from day one was his father’s decision to switch from cooking the whole hog to pork shoulders, which have less fat.

“A lot of people say whole hog is the only kind of barbecue, but people nowadays want leaner meat,” Andy says. “Also, it cuts down on the grease in the pit. Ain’t nothing so nasty as a pig fire.”

Stephenson’s uses its original deep, squat pit to smoke up to 300 pounds of meat at a time.

“That pit’s about turned my knees inside out,” says Andy, who started cooking at age 14. “I asked Daddy one day why he built it so low. He said he talked to a lady on the phone from some barbecue place to get the dimensions of the pit she had. She told him the walls were about knee high. After it was built, he found out she was a really short lady.”

On cold days, wisps of smoke seep through cracks in the brick caused by 55 years of near-constant use. The only day it’s not fired up is Sunday, when the restaurant is closed.

That’s one of the few nights you won’t find Johnny Mangum there.

“I eat here about three nights a week. If I don’t show up, people call,” Mangum says. According to his wife, Betty, Stephenson’s fried chicken is as close to Grandma Gretchen Mangum’s recipe as any she’s tried. “Everything here is delicious,” Betty says. “You can tell it’s cooked with love.”

Andy is partial to the barbecue chicken, which comes with a cup of tangy sauce. “You dip it in and take a bite and, oh, it’s just so good,” he says. Pointing to a large portrait of his father near the entrance, he adds, “We’ve worked hard to keep things as he started them.”