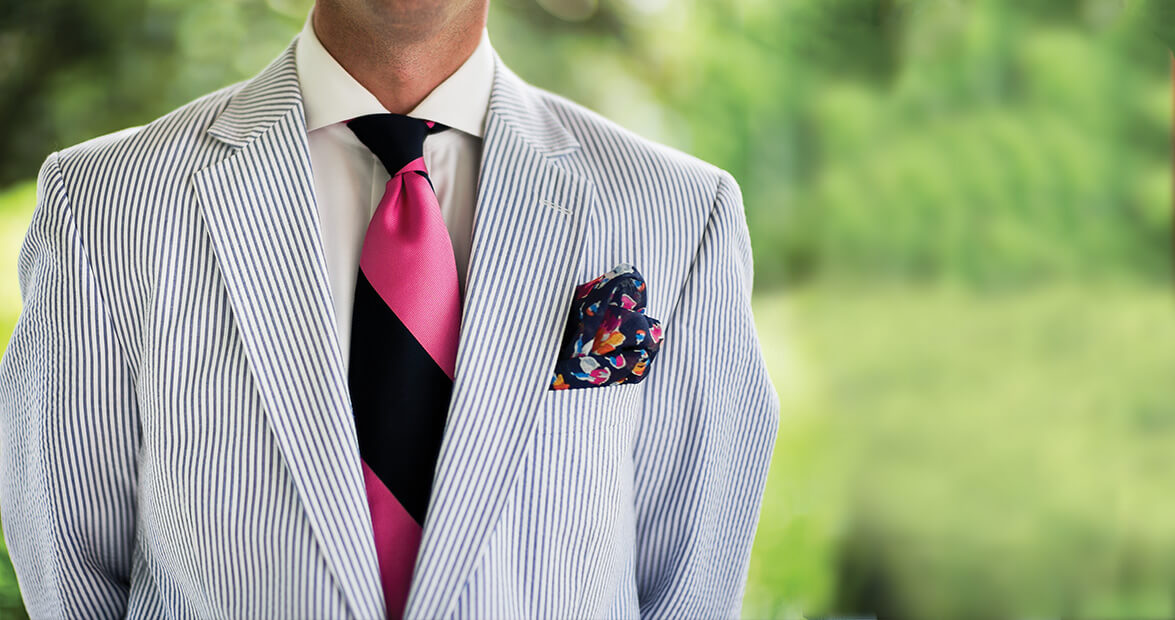 A summer wedding loomed, and I needed a jacket or a sport coat, and I thought about it; I thought so hard. But no — I wasn’t ready. So I bought the beige sport coat that goes with everything I own.

But I’d come close, spent hours in men’s stores looking at the jackets. That lightweight fabric, those pinstripes, the wrinkle that dared to be so … wrinkly. It was only a matter of time.

In fact, it was exactly a matter of time. I had lived in North Carolina for only seven years or so. The South, and the Raleigh girl I was dating — the wedding was somewhere out on a lengthier bough of her family tree — still felt exotic. A seersucker jacket would have felt like I was playing Pretend Local, when you could see at a glance that I was still just some Yankee import.

I had not yet, you might say, earned my stripes.

Time went on, though. And with another round of weddings and events coming up, it was finally time for another suit — hardly a common occurrence in my world. Married to that Raleigh girl for more than a decade now, with one, then two more Raleigh natives coming along to crowd the house, if I’m not yet a local product, then I’m at least surrounded by them. Putting on a seersucker jacket no longer seems like a ham-handed attempt to fit in or adopt protective coloration. It just looks like a way to stay cool in the heat.

Which is the actual story of seersucker, of course, and like any story in the South in the summer, it’s a long one, so get comfortable — feet up, tea poured, ceiling fan on.

Though the iconic seersucker suit has been around for only a century or so, the fabric itself goes back centuries. The first name we have for the fabric is shïr o shakkar, Persian for “milk and sugar” — milk for the white, sugar for the bumpy, granular stripes, though supposedly, originally, on silk instead of cotton. Various languages began corrupting the word, and by the time the British colonizers in India recognized that the pucker kept the fabric off the skin, thus improving airflow, the Oxford English Dictionary tells us they mentioned it in 1757 as called either sirsakas or, already, seersucker. The word showed up in the United States as early as 1736 in the Virginia Gazette (“a Seersucker Gown”) and in 1872 in Their Wedding Journey, though William Dean Howells describes not a suit, but a coat, worn in the cool weather of Niagara Falls. 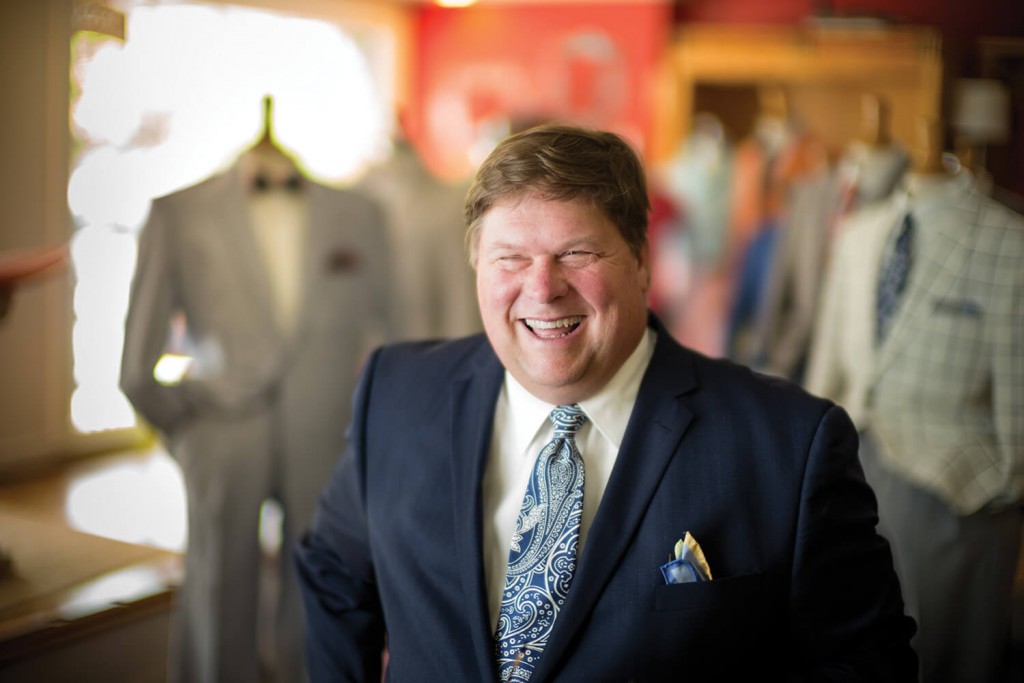 Steve Ashworth of Ashworth’s Clothing & Shoes in Fuquay-Varina has worn seersucker since he was a toddler. “Own it,” is his advice. photograph by Charles Harris

No matter. The seersucker suit we all know arrived in 1909, invented by New Orleans tailor Joseph Haspel, who was looking for a lightweight, cool, and cheap fabric to make suits for professional and working men. (It was also wash-and-wear: Haspel once famously walked into the ocean in his seersucker suit, hung it to dry, and dined in it that very evening.) The fabric puckers because during weaving, the yarn tension is regularly released, and Haspel, in the heat, humidity, and pre-air-conditioning reality of New Orleans, recognized the value of a cheap fabric that could make long-lasting suits that would also be comfortable.

The suit was a success — and, like many a working person’s fashion, was almost immediately adopted by callow youths at Princeton and similar schools. Since then, seersucker has lived a dual life — ironic and sincere. Writer Damon Runyon confused his friends by wearing the material: “They know that seersucker is very cheap and they cannot reconcile its lowly status in the textile world with the character of Runyon, the King of the Dudes,” he said. “They cannot decide whether I am broke or just setting a new vogue.”

Seersucker’s complex modern identity is hardly a secret. “The other term this was known as was Ivy League,” says Steve Ashworth of Ashworth’s Clothing & Shoes in Fuquay-Varina, whom I called when I was finally ready to personally address the puckers and stripes.

Ashworth’s has remained a main-street menswear store, resisting mallification just as the small Wake County town has resisted becoming a satellite of Raleigh. Steve knows all about seersucker, which the store has been selling since it opened in 1937. He encouraged me to get my Southern on.

“For some people, it’s a novelty,” he says. “For others, it’s a dressing tradition — they’ve had it as long as they can remember. For instance, I wore seersucker my whole life” — referring to the seersucker jumpsuits of his toddler days.

And then some of us, as I might have mentioned, come later to the party, looking less for style than for comfort. I grew up in the 1970s, when “dressed up” equaled clothes and hair washed within memory. So when I determined that, Carolinian for 23 years, I wanted in, Ashworth understood.

“You gotta own it,” he says. “You gotta believe in it. It’s gotta be part of your culture now.” Done, done, and done. “And you gotta do it right,” he adds — beige, or some other light buck shoes; a button-down white shirt; and a bow tie. You can leave off the straw boater (see “irony,” above, unless you’re in New Orleans), but his point was made. 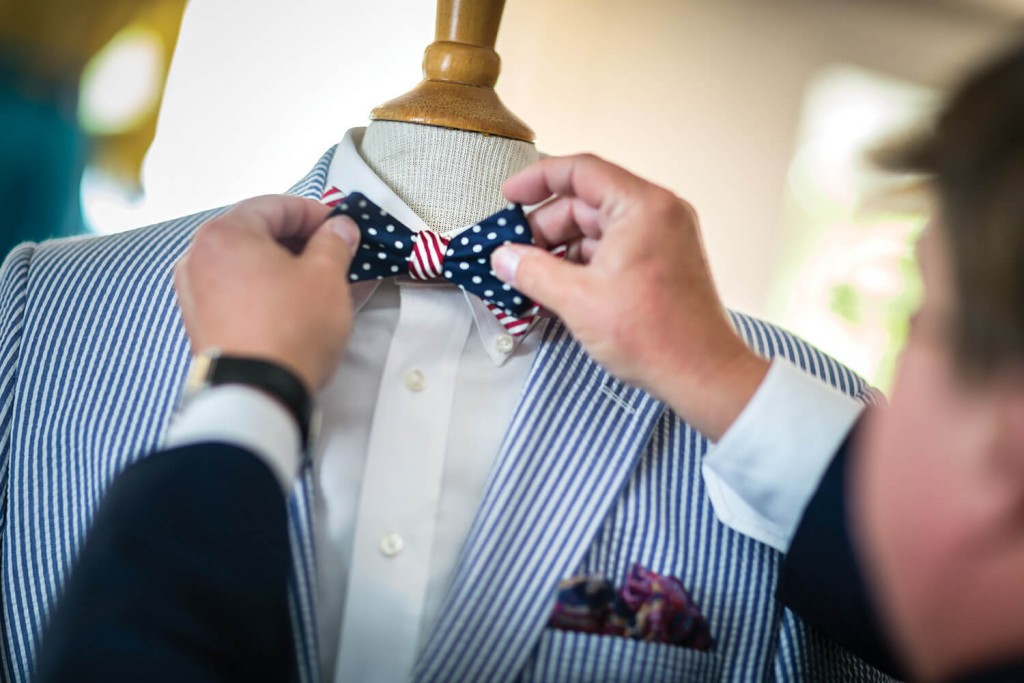 Ashworth recommends traditional blue for a suit, but when it’s time for a tie or bow tie, anything goes: stripes, plaids, prints, polka dots. Even all at once. photograph by Charles Harris

So I ordered my suit. Blue stripes, mind you — pink or green or brown might be fun in a shirt or a bow tie, but for a suit, you go with the tradition. No pleats on the pants, so no cuff. (Tailors know things like this!) But you take vertical pinstripes and put them on a guy already tall and mostly slim? Lord have mercy; I almost look like somebody.

Now, I’m in for unironic seersucker but not everything it stands for. You won’t find me with the U.S. Senate Seersucker Caucus, because — well, to be honest, I fear those professional fund-raisers are hijacking seersucker. On the other hand, nor will you find me on a porch, swirling a bourbon beneath a Panama hat. The fundamental point of seersucker is that it’s cool — I mean temperature cool. It enables you to do things during the hot summer, when merely sitting and complaining is at its most attractive.

Seersucker moves. “It kind of bounces,” Ashworth says. Another way to put this — important to those of us who still rebel against Nice Clothes — is that no matter how dashing a profile you may cut, in seersucker, you always look a little rumpled. Seersucker openly announces: There’s value in a certain degree of rumpledness. Rumple implies activity; it implies attention to more than just your clothes; it implies not caring overmuch.

And for all of us down South, it’s just hot. We don’t live in a world where you can take the summer off, and we don’t want to withdraw into a hermetically-sealed, air-conditioned box.

You want to smell the wisteria and hear the screen door and feel the ceiling fan and wave away the bugs and brush pecan catkins off your shoulders, and hey, is that another tray of drinks? Maybe just one more, and, yes, I would love to join the children in a game of croquet. No, I’m not hot; I’ll just leave this jacket on.

I think I’ve earned it.