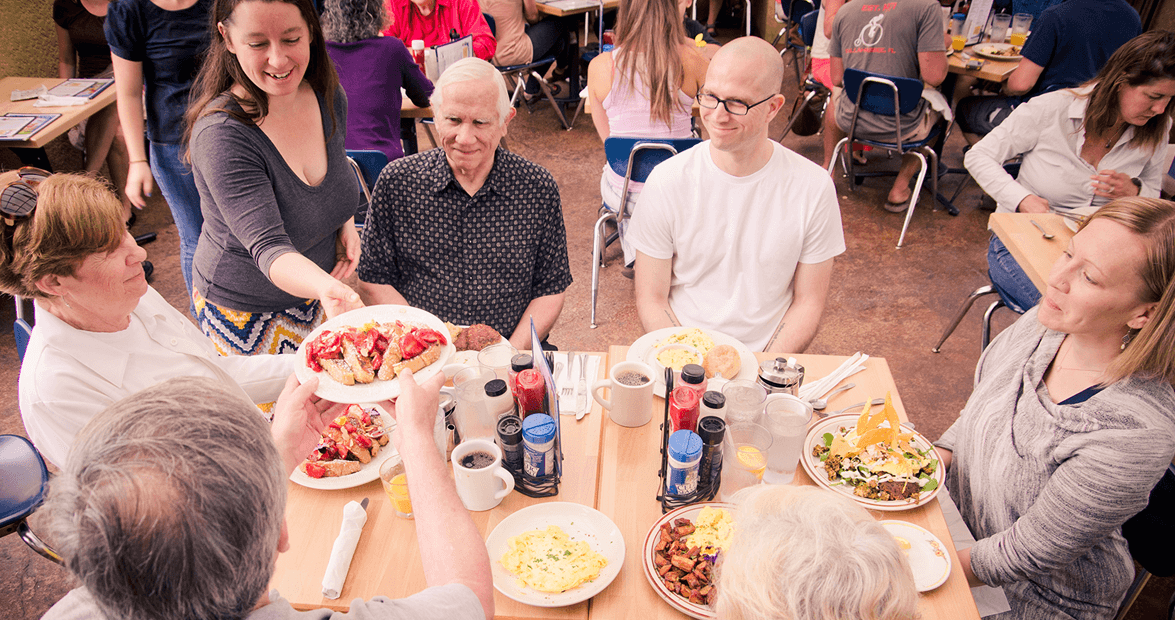 The purple snow peas growing in Sunny Point Café’s garden look about a week away from picking. April Moon Harper, the restaurant’s co-owner, crouches over the vines, palming a pod in her hand.

Around her sit tightly packed rows of raised beds, where tomatoes, beans, herbs, field greens, edible flowers, and other produce will soon be plucked to get sliced, diced, or sautéed in Sunny Point’s kitchen.

Part work of art and part working farm, this half-acre wonder of urban agriculture and the restaurant it supplies grew from tiny shoots of an idea nearly 15 years ago to become a front-and-center symbol of gritty, funky West Asheville’s impressive rebirth.

A complete cross section of the neighborhood sits inside the restaurant’s sunrise-hued dining room: tattooed hipsters, college students, retired couples, real estate wheeler-dealers in business dress, and T-shirt-wearing tourists. Their plates are filled with huevos rancheros, organic oatmeal hotcakes, and cornmeal waffles. The regulars know their favorite dishes. Only the first-timers bother to read the menu.

From decrepit to delicious

A decade ago, West Asheville lay under-loved and overgrown on the opposite side of the French Broad River from downtown Asheville. Its abandoned brick buildings on Haywood Road, and the decaying bungalows on the surrounding streets, were relics of better days. 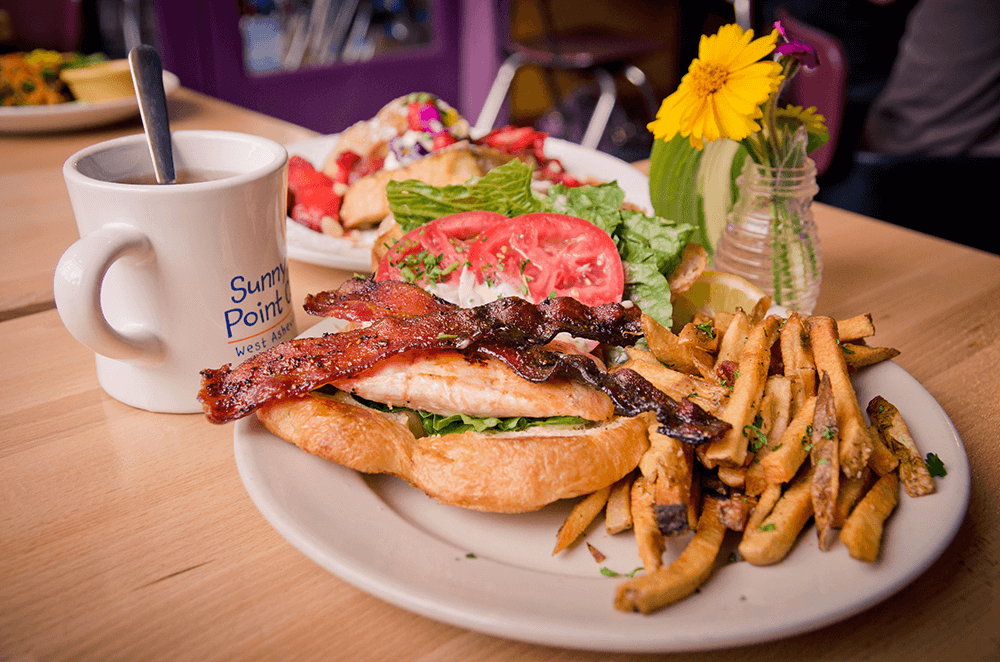 In 1999, Harper left her job as chef at the Flying Biscuit Café, a popular Southern comfort food joint in Atlanta. She returned to her childhood home in western North Carolina where her mother, Belinda Raab, wanted to open a restaurant in Asheville. The two of them began scouting real estate all over the city.

“We had a friend in the arts community who told us that West Asheville was really going to bloom,” Raab says, “so we looked there.” Artists and young couples were moving into the neighborhood because homes and studio spaces were cheap. That’s where Harper and Raab spotted a rundown two-story building for sale. Neglected for three decades, it sat so close to Haywood Road that there was barely enough room for a sidewalk.

“When my dad came to inspect it, he said, ‘Oh my god, this is gonna fall over,’ ” Harper says. But she and her mother saw potential — in the decayed structure, the three-quarter-acre plot of land it occupied, and West Asheville. They spent the next three years remodeling and finally opened Sunny Point’s doors in 2003, with just Harper, Raab, and one employee serving breakfast and lunch behind a long counter, Monday through Saturday. Before long, customers were lining up outside the door. Harper and Raab hired a waitstaff to handle the volume.

Sitting at one of Sunny Point’s square tables, Harper surveys the scene with satisfaction. “You know, for the longest time, West Asheville was called ‘Worst Asheville,’ ” she says. “No one says that now.” Not that the neighborhood has exactly turned into the Rodeo Drive of the Appalachians. An abandoned gas station sits biodegrading two doors down, and the Family Dollar across the street is as close to brand-name shopping as you’ll get nearby. But with each passing day, it seems as though a new restaurant, brewery, Pilates studio, or art gallery takes over one of the century-old brick storefronts, infusing West Asheville with new vitality.

An investment of time, labor, and neighbors

A small patch of herbs was planted first. A year later, a landscaper who regularly ate at the restaurant installed eight raised beds to grow tomato plants.

Soon someone else was organizing a volunteer day, and an army of neighbors showed up to clear the property of tree limbs, old cans and bottles embedded in the soil, and chunks of concrete. Meanwhile, the restaurant expanded to include an outdoor dining area and began serving dinner in the evenings. As Harper and Raab invested in the neighborhood, the neighborhood invested in them.

“That’s when the garden really took off,” Raab says. 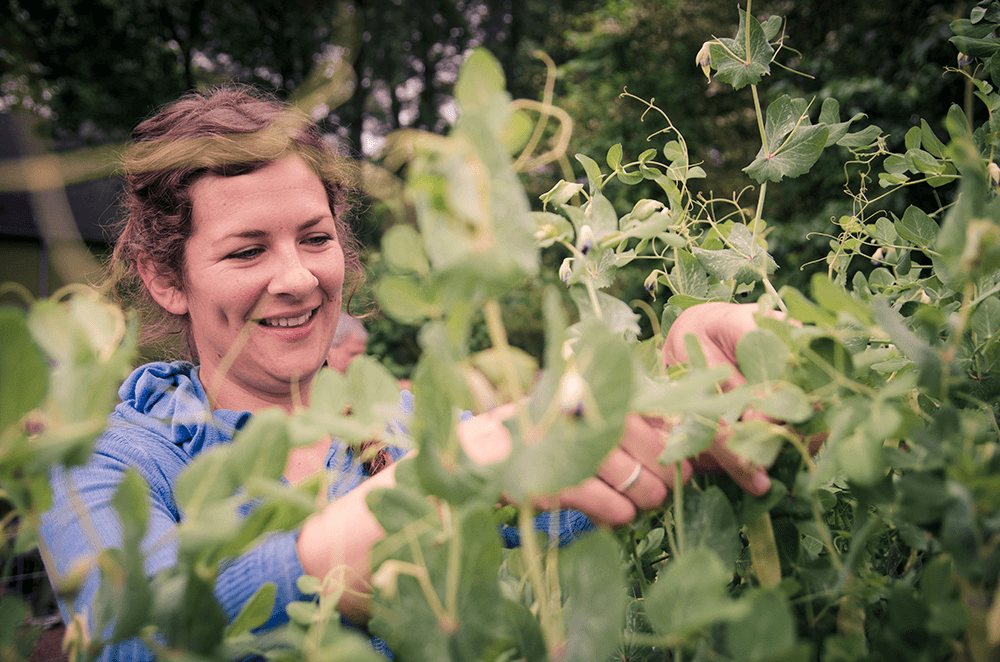 Melissa Metz, the garden manager, plies her trade outside, while patrons in the restaurant enjoy the fruits of her labor.

As the garden grew each year, the two women realized that it could save them money on fresh summer produce and herbs, never mind adding beauty to the property. So they built more raised beds, installed trellises and drip irrigation systems, and hired a full-time gardener, Melissa Metz, who began cultivating a wide range of crops. Decorations on the grounds were supplied by neighboring artists, who were paid for their efforts in free food.

Now, Sunny Point’s backyard operation is a fully registered farm with its own LLC, named “Two Hoes and a Mule” (the mule referring to Raab’s husband). In a good summer, the garden produces more than 800 pounds of heirloom tomatoes, enough basil to make a year’s supply of pesto, and all of the garden greens that are served at lunch and dinner.

Passersby tour the garden as if it’s an urban park, without even setting foot in the restaurant. Not that Harper, Raab, or Metz mind.