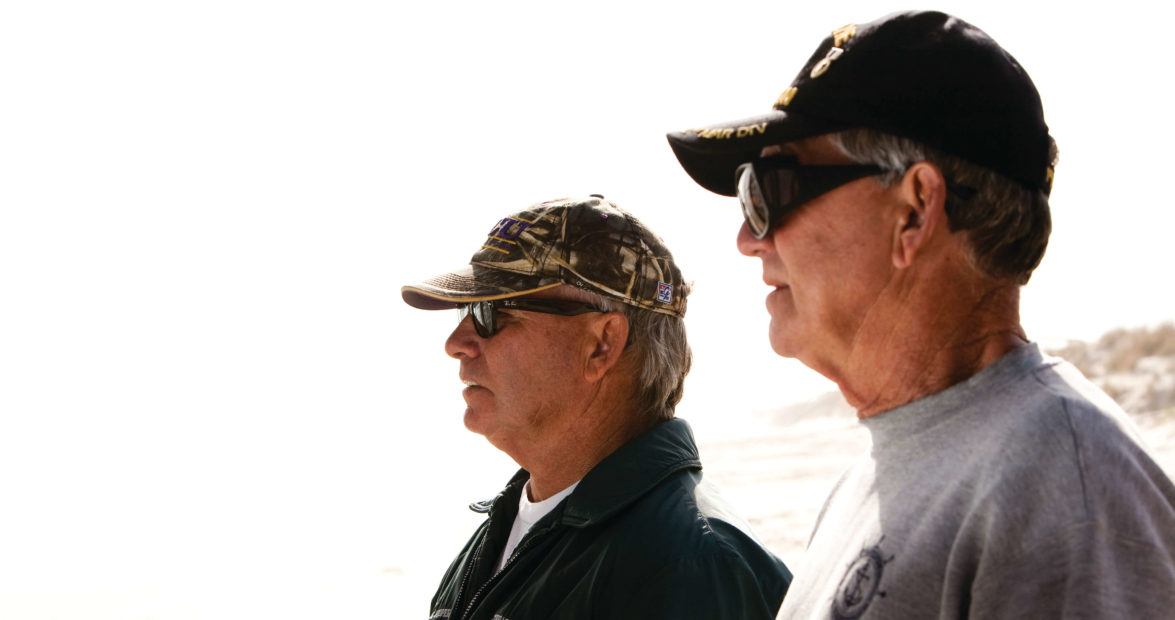 Late in the summer of 1966, a handful of teenagers with surfboards gathered at the end of Frisco Pier, along the south-facing bow of Hatteras Island. They joked; they waxed their boards, and surveyed the ocean with studied nonchalance. The scene around them was far from placid: distant Hurricane Faith had stirred the ocean to a fury, making waves of consequence, gray barrels that reared up far beyond the pier and rattled its timbers as they charged beneath.

The boys watched and waited. And when a lull finally appeared, they climbed the pier’s railing and plunged to the water below, tossing their boards away from them as they fell. They surfaced, stroked hard for the boards, climbed on, and paddled like mad to get beyond the breakers.

“We couldn’t have made it out by paddling our boards through the beach break — the waves there were just tubing out,” remembers John Ochs, one of the few who braved Faith’s swells that day. “But out on the second bar they were just beautiful. So we asked the pier owner if we could jump off it, and he said, ‘Sure.’ God, we spent hours out there. They were the biggest waves I ever surfed in my life.”

Today, Hatteras Island is a globally recognized surfing destination, a place where East Coast surfers come to get their first taste of power and traveling surfers come to see what, exactly, the Atlantic can do. Waves here break harder and more consistently than they do anywhere else along the Eastern Seaboard. Topography is the main reason for this; the island’s seaward thrust, the Continental Shelf’s proximity to shore, and the battle of warm and cold ocean currents east of the barrier islands leave them open to the force of each passing storm.

“The most common comparison is of Cape Hatteras as the ‘Mecca’ for East Coast surfers,” says Matt Walker, a senior editor at Surfing magazine. “It stands as most East Coasters’ first trip — one they’ll repeat over the course of a lifetime.”

Yet, as late as the early 1960s, the barrier islands remained a virtual terra incognita, well off the maps of even the boldest traveling surfers. For centuries, the Cape’s waves were regarded more as an object of fear than a source of pleasure, and the notion that anyone should want to ride the big ones for sport in the “Graveyard of the Atlantic” bordered on lunacy. That changed in 1961, when a few of the local boys witnessed something unusual taking place offshore.

“These fellas come down from Virginia Beach once with their surfboards and, well, we all had to try it,” recalls Ochs. “And you know, I did pretty OK at it. I even stood up once and rode one straight in.” He smiles. “I done pretty good until I hit the shore.”

The feeling was too good to let go, and it wasn’t long before Ochs had found a surfboard, one that another Hatteras teen, Wayne Fulcher, was willing to part with.

“Back then, we pretty much had the place to ourselves,” remembers Buddy Hooper, who, along with Ochs, Johnny Conner, Doug Meekins, and a handful of others, was one of the first surfers to try the waters off the Cape. Schoolmates at Hatteras High School, the boys sought the waves all summer as jobs would allow, a happy diversion on an island that offered little else to do. “We were water rats, plain and simple,” Hooper says. “We lived to surf.”

They rode the big boards popular at the time, 10-foot slabs shipped east from the thriving California surf scene. Conner was the entrepreneur of the group, operating a surfboard rental concession out of his parents’ grocery shop in Buxton. Ochs was the ‘old man,’ a year older than the rest, his driver’s license the key to their mobility.

“Lord, we used to do all kinds of stuff back then,” says Hooper, who makes a living today as a charter boat captain. “We’d go all over the island to find surf; drive from one end to the other. It wasn’t nothin’ to jump off a pier when the waves were good. It was no big deal.”

Self-taught, they made their share of mistakes. One of the boys, says Ochs, “thought he’d get some wax for his surfboard. So he got some bowling alley wax and rubbed it all over it. Well, you never saw so much slipping around and wipeouts.”

Surfing arose in the eastern imagination in the early 1900s, when the Hawaiian waterman Duke Kahanamoku first demonstrated the “Sport of Kings” for onlookers at a New Jersey beach. The boards Duke and others rode at the time were hulks of planed wood, closer to their Polynesian antecedents than the performance boards surfers ride today. Design and materials both improved in the following decades, and by the 1930s, hollow plywood surfboards came into use, the invention of a Wisconsin-born waterman named Tom Blake.

About that time, surfers began appearing in Virginia Beach. One of the first to travel to the Outer Banks in search of waves was Bob Holland, a former surf shop owner and bay pilot who summers today in Kill Devil Hills. “We surfed the piers and places like that — Kitty Hawk Pier, on down to Coquina Beach,” says Holland. In time, he pressed farther south — by then riding boards of fiberglass and foam — beginning a lifelong affair with the Cape, a place he still counts among his favorite breaks, although he’s ridden waves from Hawaii’s North Shore to Costa Rica’s tropical waters.

When West Coast surf legend Phil Edwards and his entourage came to Virginia Beach during the summer of 1966, it was Holland who volunteered to show them the surfing breaks “down south.” “We started in Virginia Beach and ran all the way down to Hatteras Village,” he recalls, checking every pier, jetty, and promising sandbar along the way for any hint of swell.

The generosity Holland showed his guests was characteristic of the time, says Surfing magazine’s Walker, a vibe shared likewise by Ochs and his Hatteras Island friends, most of whom surfed alone or in groups of two and three at the most, and were happy to have company of any sort in the water. “From what I’ve heard, they were quite friendly and welcoming when the first crews came down to visit,” Walker says — unthinkable today, when the best swells can present as gridlocked parking lots, scores of bobbing heads in the lineup and, at the worst, an ugly strain of territorialism. “Bet they never anticipated how much things would change,” adds Walker. “Like every happy savage who takes in a missionary thinking, ‘What harm can he do?’”

There were no wetsuits to moderate the ocean’s chill back then, meaning that the surfing season lasted from April to October; shivering, blue-lipped days were just part of the deal. “I became like a prune. I was a particle of the sea,” says Ochs. “I tell you, I was out there so much that I’ve still got dings in my knees from where I used to kneel on my surfboard when I was paddling.”

End of the line

To this day, Ochs, Hooper, and Conner remain friends. Ochs co-owns the Quarterdeck Restaurant, a short walk across N.C. Highway 12 from Frisco Pier. Conner is semi-retired from the family grocery business. Hooper sets off most mornings on Hatteras Fever II, bound for Gulf Stream waters. None of them still surfs. Last to go was Hooper, who was put out of commission a few years ago by a shoulder injury.

Ochs’s surfing career was cut short by his deployment, in 1968, to Vietnam with the United States Marine Corps. A year later, during Operation Pipestone Canyon, he was hit with shrapnel during enemy fire. “Most of our platoon was lost,” he recalls. “But I managed to get out.” Ochs recovered in military hospitals and retired from military service in 1971. By the time he managed to return to Hatteras, the surfing world had changed profoundly.

“I took my 9’6” Ventura out, and I felt like I was riding an aircraft carrier,” he recalls. “The water was so crowded with other surfers, all riding these little short boards. I figured I’d just better take my aircraft carrier back home and call it quits.”

Years before that, late in that eventful summer of ’66, another group of California surfers visited the Outer Banks, arriving on the heels of Phil Edwards’ visit. Setting out from Virginia Beach was Surfer magazine photographer Ron Stoner and a group of nearly 20 fellow watermen, all who caravanned the length of the northern Outer Banks from Kitty Hawk to Cape Hatteras. The first signs of Hurricane Faith were building across the sandbars, and the group scored decent surf all the way down. But it was only when they’d reached Hatteras Island that they witnessed something truly remarkable.

“This was the biggest surf that I’d ever seen except for Hawaii,” Stoner later wrote. “Waves were breaking about two miles out to sea.” But the swell had been “blown out” by stiff onshore breezes, Stoner related, and “there would be no surfing.”

What Stoner didn’t know was that a crew of wiry natives had already made their mark on Faith’s waves, catching them at their best and leaving the water as soon as the contrary winds began to blow. It was a classic setup from surfing lore: The traveling surfer, expecting good waves at a remote destination, only to be told by the locals, “You shoulda been here yesterday.”