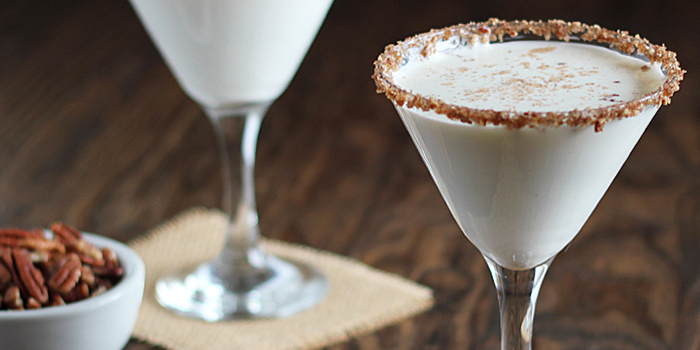 Sweet potatoes aren’t just for side dishes and desserts anymore. Most people think about using sweet potatoes around Thanksgiving and into the winter holidays in pies, casseroles, or roasted – not in a cocktail. I’m going to show you how to get that sweet potato pie flavor in a delicious martini. Besides, who says you can’t have your dessert in a glass?

I recently came across North Carolina’s Covington Sweet Potato Vodka and was intrigued at vodka crafted from sweet potatoes right here in North Carolina. Why not? It is, after all, our state vegetable.

I knew I had to create a dessert cocktail with this vodka and concocted what I named a “Sweet Potato Pie Martini.”  Even if you’re not into sweets, but love a good martini, this cocktail is a “must try.”

I pondered over what to rim the glass with, but ultimately it was not a very hard decision. I considered the ingredients in a traditional southern sweet potato pie and used crushed pecans, brown sugar, and cinnamon. If your pecans aren’t already crushed, an easy way to crush them is to place them in a sealed Ziploc bag and roll with a rolling pin.

I added heavy cream and French vanilla creamer to the sweet potato vodka for the martini.  After straining it into the glass, I gave it a slight sprinkle of ground nutmeg. The result was a smooth, creamy, and spicy dessert cocktail that makes for an excellent martini, alone or as an after-dinner treat.

Combine crushed pecans, cinnamon and brown sugar in a small bowl. Transfer to a shallow plate.