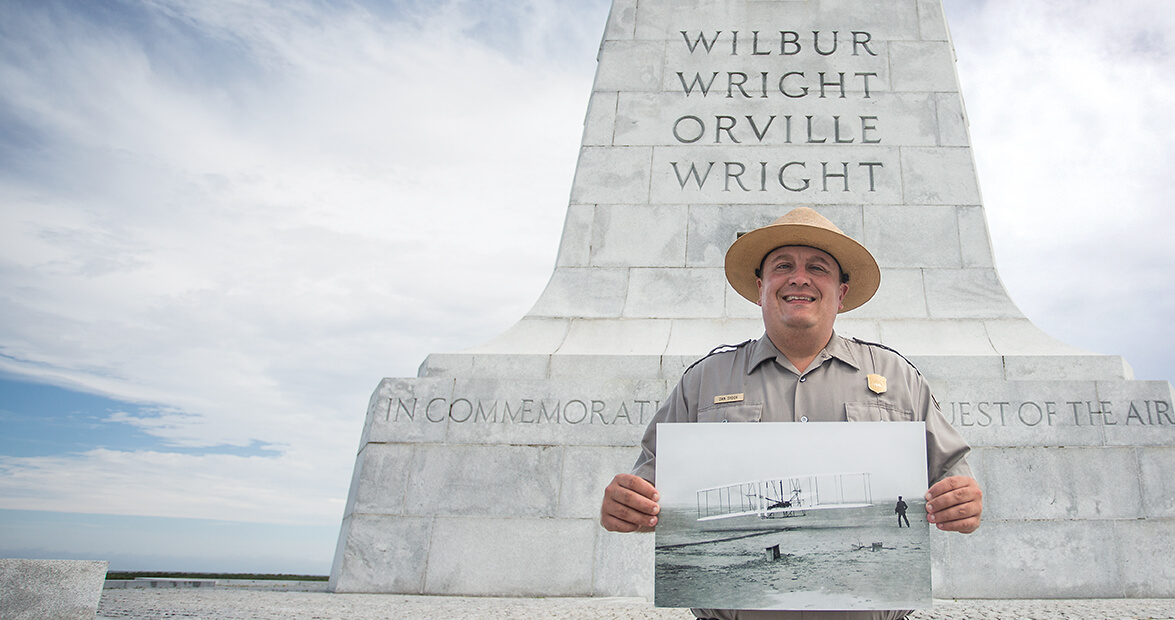 1903: The Wright brothers take flight. This historic date is included in our 50 Moments that Made NC.

“You are sitting in the cathedral of impossibility,” Dan Shook says. Shook, an interpretive park ranger at the Wright Brothers National Memorial, stands in front of the $1.4 million replica of the Wright Flyer in the visitor center. Filtered sunlight from large windows backlights the flyer. The crowd that fills the room to capacity is stilled in curious silence.

Shook lifts a large photo above his head. One of the most famous ever taken, the iconic photograph captures the moment that, on the morning of December 17, 1903, changed the course of history. A silhouetted pilot, Orville Wright, lies prone in the blur of whirling propellers, sandwiched between two white wings. To his right, the flat strand accentuates the dark profile of his brother, Wilbur, whose coat flaps in the winter nor’easter as he runs alongside the flyer. Soaring a few feet above its charcoal shadow on the sand below, with the gray, winter sky above, the first flying machine had left the earth just two seconds earlier.

“This is the birth of aviation. This photo is one of the most important birth certificates in the world,” Shook says. “This photograph also shows something dying. This, my friends, is a photo of the death of impossibility.”

Like many of the visitors in his audiences, Shook has faced his fair share of impossibilities. His determination to fulfill a lifelong dream may explain why the Wright brothers’ story is so important to him.

Raised a few hours’ drive from Yellowstone and Glacier national parks, Shook’s love of the outdoors was inspired by his grandfather, a backcountry ranger who flew his family in a Piper Cub into the Montana wilderness every summer. At age 10, Shook knew he wanted to be a park ranger.

After struggling through high school, Shook joined the U.S. Navy and served as a public affairs journalist, but was “miserable on a ship in the middle of nowhere.” He enrolled in the forestry program at the University of Montana after completing his military enlistment, only to drop out a year later. It only took one summer working in his family’s funeral home to sufficiently motivate Shook to return to college in Missoula.

“The Wright brothers aren’t superheroes. They are me. They are you.”

Shook was drawn to storytelling, and his suffering GPA soared when he found his life’s calling in a course designed to teach aspiring rangers how to connect people to natural resources through interpretive techniques. He held several part-time positions at Montana State Parks AmeriCorps, which provided not only valuable experience as a park manager and interpreter, but also money toward what he calls his “$50,000 hat,” the tan, Smokey-the-Bear-style Mountie that only degreed rangers are qualified to wear. After graduation, Shook worked seasonal jobs at two national parks, but still wrestled with a paralyzing fear of public speaking.

“I felt sick speaking to only a dozen people,” he says. “But, about the third time standing in front of 5,000 people and telling them about Old Faithful, I realized they weren’t there to see me. After that, public speaking was easy.”

Shook’s presentation at the Wright Brothers National Memorial has experienced its own journey, evolving from a simpler stream of historical facts to today’s interpretative talk that brings tourists to tears. Shook has found a way to use his knowledge of history and his sense of humor to fold the brothers’ story into a larger human story, the story of every listener’s unfulfilled dreams.

“The Wright brothers aren’t superheroes. They are me. They are you. They are every breathing person in this audience. They just didn’t give up,” he says. “They took the word impossible and told every future generation that whether the goal is the moon or Mars or a cure for cancer, it just hasn’t been figured out yet.”

Following the program, many visitors wipe tears from their cheeks as they tell Shook about their own loved ones, now deceased, who considered Kitty Hawk to be hallowed ground. Shook recalls the deep grief of a mother of a fallen veteran helicopter pilot in Afghanistan, who spread her son’s ashes on the rock just beyond the windows of the visitor center. He describes how clarity and life return to the faces of World War II pilots with dementia when they engage with the portraits of Chuck Yeager, Neil Armstrong, and other famous aviators.

“I’ve never made a connection with a group of people like I have here,” Shook says. “The reason is that this place is greater than any of us. I don’t know them. They don’t know me. It’s just a powerful place.”

The park’s visitor center is closed for renovations until mid-2018, but the memorial and park grounds are open.