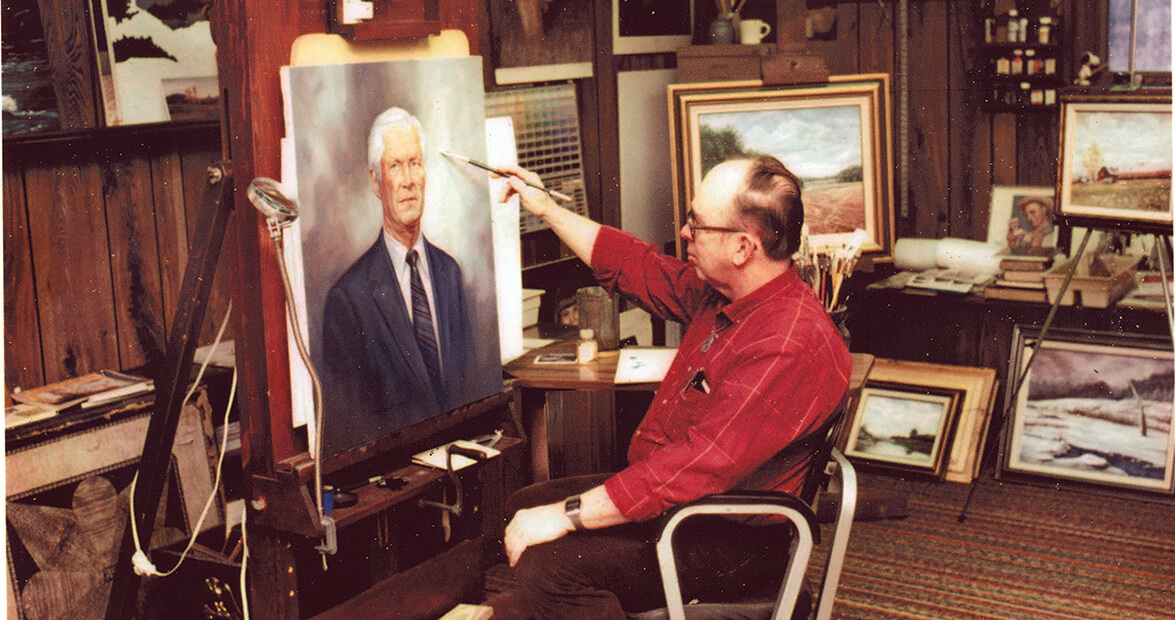 Talmadge Moose, my husband, loved to draw. When he was 12, he checked out the only art book in the Stanly County Public Library so many times that it had to be re-bound, and he fell in love with Norman Rockwell’s Saturday Evening Post covers.

In them, Talmadge saw the people who came into his father’s service station and grocery store on N.C. Highway 52 in Albemarle. When he worked the counter and tended the pumps, he kept a drawing board at hand and drew cartoons and sketches of his neighbors. Uncles, aunts, and cousins populated the land around him and down the road toward Norwood. “Mooseville,” he called it. Three uncles owned dairy farms, and his uncle Guy delivered milk in cream-colored trucks labeled “Moose’s Milk.” A lot of people in Albemarle remember being raised on Moose milk.

At Albemarle High School, Talmadge illustrated the annual, and when he graduated in 1951, he received the art medal. No art classes were offered in school, but Talmadge took drafting, which he said taught him to see, and shop, where he built himself an easel.

He created his first painting — a worn high-top shoe — with a basic oil-painting kit and shoe polish. It’s part of the collection I gave to the Stanly County Historical Museum following Talmadge’s death in 2003.

I met Talmadge on the Fourth of July in 1952 at a picnic in Stanly County. I was 17, and he was 22 and had more ambition than anyone I’d ever met.

Going to art school was a last-minute decision for Talmadge. The first Moose to go to college, he was enrolled in pharmacy school at the University of North Carolina at Chapel Hill, when, two weeks before classes started, he told his parents he wanted to go to art school.

Flora and Cecil Moose had never heard of such a thing. How would he make a living? “Air castles,” his father called Talmadge’s dream of being an artist.

But they paid the tuition for four years at Richmond Professional Institute in Virginia. When Talmadge came home from school, his mother saw his drawings and said, “We’re paying all that money for you to go up there and draw naked people?”

He wrote term papers on Norman Rockwell. “I made Cs on those papers,” he said, “because my art professors didn’t consider Rockwell an artist. Picasso was an artist. Rockwell was an illustrator.”

Talmadge proved that illustrators are artists.

After graduation, Talmadge got a job creating window displays for Belk Department Stores in Charlotte and worked part-time for an advertising agency. Not quite art, but art-related. All the while, he studied and drew. He ate, slept, and breathed art. And he waited for me to finish school so we could get married.

Our first home was in Winston-Salem where he worked for Western Electric as a technical illustrator — and discovered technical illustration was not for him. He took a job as art director for a textile engraving company, and we moved back to Charlotte.

Nights and weekends, he worked on magazine covers for house organs. Not quite the Saturday Evening Post, but he loved taking an idea and making it come to life.

He worked on packaging and advertising by day. Sometimes, I’d go grocery shopping, lean over the frozen food counter, and see a pizza box he designed. In the candy aisle, I’d recognize another package I’d seen in sketches in his studio.

He occasionally asked his family to model for him. He’d call me or one of our boys, Barry and Lyle, into the studio so he could draw our hands or feet for some package. I saw my foot on a lot of socks packages but never my legs wearing panty hose. Drat.

At night, he devoted himself to fine art. He painted one of our neighbors under an open umbrella grilling out in the rain. He painted his father, surrounded by children, turning a freezer of ice cream.

Working with pencil was Talmadge’s first love, and he drew, with dozens of Eckerd’s No. 2s, a long, tall drawing of his grandparents that he named Eight Apiece for the buttons on their clothes. He worked on this drawing several weeks, late into the night. When he was at the easel, he hummed, and I knew I heard a happy man at work.

Talmadge did another large drawing, with the same Eckerd’s No. 2 pencils, of a farmer in overalls smoking a cigar. Named Rain, the picture of the portly farmer in front of his rolling fields illustrated an old saying Talmadge remembered hearing in his father’s service station. When folks saw someone smoking a cigar, they said, “I see it’s going to rain.” According to superstition, when pigs tote sticks, it’s going to rain. The drawing won first prize in a print and drawing show at the Southeastern Center for Contemporary Art in Winston-Salem.

Talmadge left the engraving company and began freelancing from a studio on the lower level of our house. As always, commercial work occupied Talmadge’s days. He always dressed in a shirt and tie to go to work in his downstairs office. And he usually made his own lunch, and mine, too, if I was busy at the typewriter (later a computer, which he made me learn to use).

Freelancing meant Talmadge could pursue more creative projects. He illustrated articles I wrote for Our State magazine and other publications, and he loved illustrating Our State’s “Uncle Corny” stories. He did works in watercolor and acrylic for Southern World. He illustrated Guidebook to the North Carolina Piedmont and brochures for businesses. He illustrated two of my books.

After we moved to Stony Mountain in the Uwharries, where he and I had side-by-side studios with equal square footage and floor-to-ceiling windows that looked out on woods and a small creek, he painted portraits for organizations and individuals.

He did a huge painting of a Charlotte Observer rural route box set against red-clay fields with an old Orange Crush soda can in a nearby ditch. He thought the rusty, crushed Crush can was funny and had it in his studio for weeks. The painting still hangs in the newspaper’s downtown Charlotte building.

We also spent weekends at the North Carolina Museum of Art in Raleigh, where Talmadge absorbed paintings by Rembrandt, Mary Cassatt, and other “real” artists. He said artists could study reproductions of paintings, but unless you saw the real thing, you missed a lot.

Throughout his career, Talmadge won awards and received acclaim. He had several one-man shows, including one in the Russell Rotunda in Washington, D.C., and Eight Apiece appeared in an exhibition at the High Museum of Art in Atlanta, Georgia. His works toured the country with the Springs Mills Traveling Art Shows.

But the show that I remember meaning the most to Talmadge was held in Cape May, New Jersey. One man spent an hour studying
Talmadge’s paintings. He walked away but then came back twice more for long periods. During his last visit, he sought out Talmadge and said to him, “I’ve never been to North Carolina, but I think I know it now from your work.”

Talmadge loved that story and repeated it often.

Talmadge never had a Saturday Evening Post cover, but he felt he painted what he knew — North Carolina, and Stanly County in particular.

In 1996, we moved to Fearrington Village, and I started teaching creative writing at UNC. Talmadge designed his studio with perfect north-light windows on three sides and balanced overhead lighting. He had two easels and a drawing board and a collection of 996 art books.

I gave some books to the Ben Long School of Realism in Asheville and the rest to the Arts Incubator in Siler City, which set up a small art library in his name.

As Talmadge was dying, he said, “I’ve had a good life. I did what I wanted to do.”

The life he chose as an artist was meaningful. He did work he was proud of. He captured some of the people he knew and loved, and also drew and painted the Albemarle and Stanly County he saw as nobody else ever would.