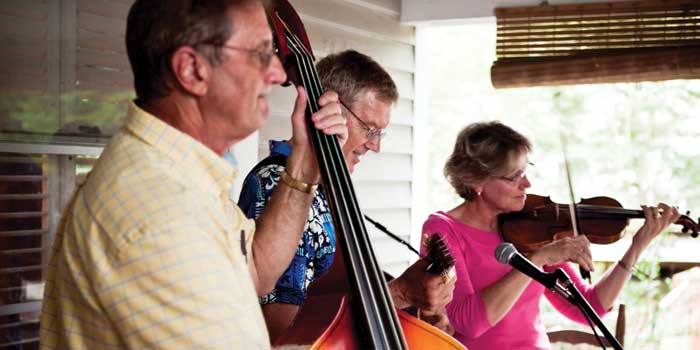 As a busy doctor in Tarboro, Dr. Peter Temple often pulled out his guitar to unwind after his long days taking care of patients. And when he finally got a night off, usually Wednesdays, he invited friends to join him.

Soon, everyone knew that for the best music around, you should drop by the Victorian house on St. Patrick Street, have a seat on the porch or stairs, and listen as long as you like. Those with instruments joined in the Wednesday night porch pickin’s. The regulars began performing together, and when bluegrass godfather Bill Monroe visited East Carolina University in 1972, they welcomed him with their new name — the Tar River Boys. And one of eastern North Carolina’s best-loved bluegrass bands was born. (Story continues below the audio clips.)

Enjoy these tracks from Bluegrass and More by the Tar River Boys. The album includes some of the group’s favorite old tunes and some originals. Simply click the play button below the song to listen.

Music on the side

“This is my release,” says Temple, now 73 and retired. “I’ve played a few times while I waited on women having babies. Once I played the banjo in intensive care for someone who was having a heart problem and wanted to hear ‘Home Sweet Home.’ I picked it for them, and they really liked it.”

The group includes founding members Temple and Louis “Buddy” Zincone, along with Willie Nelms, bass, of Greenville; Bill Poplin, guitar, a former manager at Abbott Laboratories in Rocky Mount; and Roger Sauerborn, mandolin, a forester and real estate agent also of Rocky Mount. Fiddler Frances Smyth, a nurse-practitioner in Elizabeth City, joins when she can.

While Temple is the group’s heart and soul, Zincone, 70, a retired associate dean of ECU’s College of Business, manages engagements. And Nelms, 62, retired as director of Sheppard Memorial Library in Greenville, serves as the group’s chronicler.

Like his bandmates, Zincone has many stories. He arrived in 1966, fresh from graduate school, with his wife, the late Maria Zincone. He had a doctorate but not much else. Music, he says, was good, cheap entertainment.

“I didn’t have any money and tried to figure out something I could do,” Zincone says. “We would get together every Saturday or so, and I’d say, ‘Bring a six-pack of beer and a bag of potato chips.’ ” For decades, Zincone’s Greenville home served as bluegrass central, where people of all talent levels played music in his living room.

Zincone’s passion to master the banjo and share it with others drove him to continue the gatherings. “The banjo set me on fire,” he says. He calls his teaching method take-no-prisoners bluegrass. “Nothing will improve you like playing with someone who is better than you,” he says. “Do the best you can, and eventually you’ll get better.”

Bluegrass style usually means trying to play faster and with more virtuosity than your bandmates during the instrumental interludes known as breaks. “It’s like horses trying to go faster,” Zincone says. “The bass needs to be just a fraction ahead of the beat.”

A long way from the Appalachian Mountains that nurtured bluegrass, the Tar River Boys provide a popular soundtrack for eastern North Carolina. They even performed for George W. Bush during his 2001 visit to ECU.

“We play everything from pig pickin’s to bar mitzvahs,” Nelms says. Nelms grew up in the middle of country music territory. Tennessee Ernie Ford’s brother, Stanley, was a custodian at a library Nelms directed before moving to Greenville. “I saw the first generation of country and bluegrass singers, and it was a real influence on me,” he says.

The Tar River Boys’ popularity speaks to bluegrass music’s familiar language — one that’s easy to understand and share. “Bluegrass is like a conversation,” Nelms says. “Everybody has a role to play, and when that person plays, everybody else backs off to listen.” 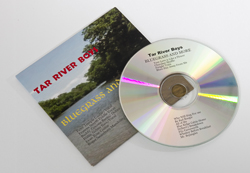 The lively sound of the Tar River Boys comes through on Bluegrass and More, a collection that goes beyond the traditional. You’ll hear nearly every member of the band, led by Dr. Peter Temple, who provides vocals on many tracks, singing or picking before the disc is over.

The CD begins with “Your Love is Like a Flower,” a song of heartbreak by Flatt and Scruggs. The familiar “Freight Train,” written by Carrboro native Elizabeth Cotton, comes next.

Such is the variety of tunes that you’ll also hear “Mr. Bojangles,” by Jerry Jeff Walker, along with “Be Bad Boogie,” with Willie Nelms on lead vocal. “Filo Farnsworth,” written by group member Roger Sauerborn, tells of the man who invented the television ahead of its time.

Robbed of its torch-song trappings, “All of Me” becomes a whimsical anthem to consuming love. You can almost see the mist rolling in from the mountains on “Blue Ridge Cabin Home,” a song about longing for home originally recorded by Flatt and Scruggs in 1955.