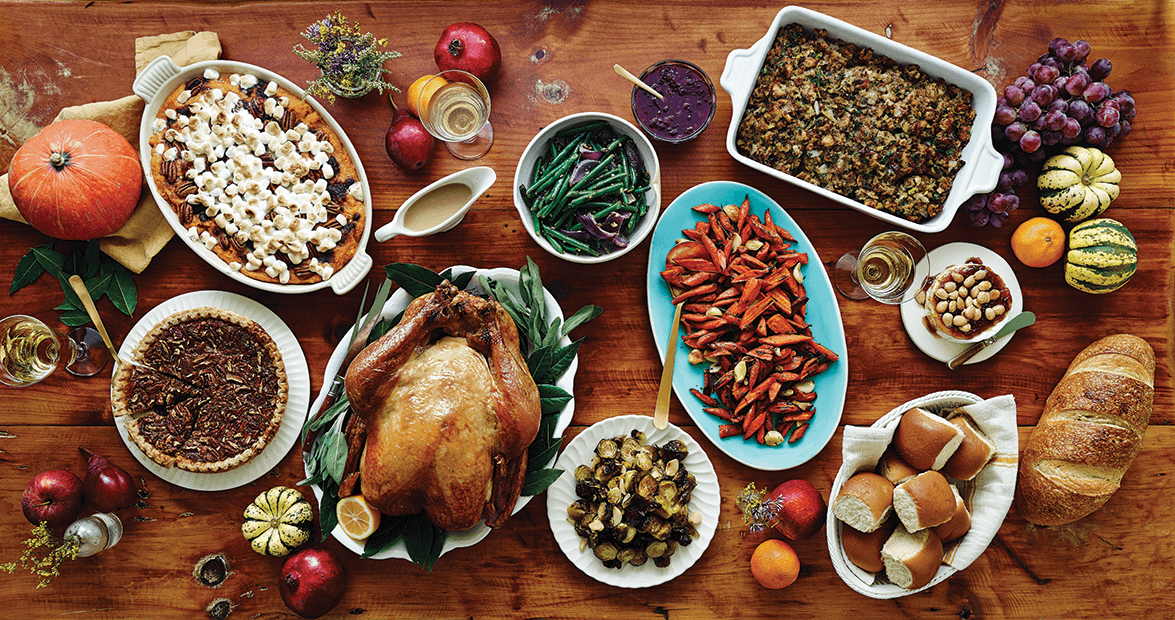 EDITOR’S NOTE: This story was featured in the November 2014 issue of Our State magazine.

Surely you recall your school-days facts. You remember that the first Thanksgiving took place in 1621, when the Pilgrims invited 90 Native Americans to join them for a feast. Of course you do, but not as well as you remember making a Pilgrim hat (if you were a girl) or a Pilgrim collar (if you were a boy) out of construction paper. Perhaps you also remember that other social studies fact, that President Lincoln proclaimed Thanksgiving a national holiday in 1863, to be celebrated annually on the last Thursday in November. Probably not as much as you remember making a turkey out of a pinecone. Prepare yourself, then, for assumed-fact balloon bursting: No evidence exists that turkey was served during the three-day feast in 1621. Geese, ducks, venison, fish, berries, yes. And no pumpkin pie. Flour was too scarce.

Never mind. Tradition trumps history at some point, and no Tar Heel Thanksgiving table would be complete without turkey (roasted, fried, or, heck, purchased) and pumpkin pie, along with the various conditional sides: sweet potato casserole (marshmallows on top, yes; raisins inside, no), rice (white, please, not wild), gravy (I claim “not it” when it comes to being in charge of this), scalloped oysters, green beans, creamed spinach and/or creamed onions, rolls (cornbread, as much as we love it, does not go with turkey, and besides, it’s already in the stuffing), cranberry sauce (the store-bought, solid, cylindrical kind that still bears the can’s rib marks), dressing or stuffing, and please make extra, because stuffing between white bread with a lot of mayo — a soft, salty, unbeatable concoction of carbs — is the seasonal version of summer’s tomato sandwich.

Here’s where the confounding problem of a Thanksgiving menu rears its head: What to do about a salad? Not a salad exists that “marries,” as the foodies say, with a Thanksgiving turkey meal. I’ve tried repeatedly. Not arugula. Not iceberg. Maybe some gelled concoction with cranberries and mandarin orange slices (and no nuts). Cold just doesn’t work with turkey. For this reason, the relish tray, that thick glass or crystal clodhopper with its clever compartments, survives. You’re meant to glean whatever vitamins and minerals you can from the celery and carrot sticks. Or you can just have a Bloody Mary and talk yourself into believing that it contains the same nutrients as tomatoes.

Thanksgiving is the best holiday of the year, but you’re a grown-up before you realize this fact. For many, Thanksgiving isn’t one day but four, and it always includes a weekend, unlike Christmas, which seems inconveniently prone to falling midweek. And unlike Christmas, Thanksgiving involves no gifting, no wrapping, no meltdowns, no disappointments, no returns. (As my friend says, “Those damn wise men. They started all this.”)

What, then, besides the food, makes this day so prized, so anticipated, so lovely? It’s my mother tunelessly whistling “We Gather Together” over and over in the kitchen. It’s the gold-rimmed goblets that must be washed by hand and the snowy white, padded linen trivets on the dining-room sideboard. It’s the brown-and-cream turkey-themed china and the silver knife rest brought out only once a year, but so worth the splurge. It’s the dressing up.

But it’s also the jeans and boots, the rough picnic table and bent fork tines and mismatched chairs of a Thanksgiving in a cabin. Dogs on the floor, kids in the creek, turkey in the fryer. Because the blessing of Thanksgiving is that it’s transferable. It doesn’t require roots, as Christmas seems to, both metaphorically and literally, with traditions of trees and presents. Thanksgiving can be thrown, held, eaten anywhere. I’ve celebrated Thanksgiving at home, of course, but also at restaurants, at a golf resort, at a beach cottage, at other people’s tables. After a grief, when home seems too laden with loss, Thanksgiving is portable. Place is irrelevant. That meal, between noon and 6, and-there’s-nothing-for-supper-but-cereal, goes everywhere, fits anywhere, and still feels at home. Unless you’re in London, where my family spent one Thanksgiving — and my advance on a novel — with our heads tucked in the fake guillotine at a Tower of London tourist trap while, across the pond, everyone else was tucking into turkey. While we gazed at the crown jewels, Thanksgiving never came that year. Thanksgiving seems so singularly American. Everywhere else, it’s Just Another Thursday.

Why else is Thanksgiving the year’s superlative holiday? Whatever the weather, it’s grand. Warm weather is a bummer at Christmas, with its hopes of snow. On Thanksgiving, warm temperatures are a blessing, for football games, walks, hunting, shooting skeet, or getting at the last of the leaves. And if cold outside, it’s a bonus: all the better to stay indoors with parades and, well, football. Thanksgiving scarcely calls for decorating and the accompanying Martha Stewart-induced guilt. (See aforementioned pinecone turkeys.) Or just buy a mini-pumpkin. Get it before Halloween, because they’re gone the day after, to make way for pyramids of Eagle Brand Condensed Milk. Add apples, and mound it all atop autumn leaves. Drape with grapes. Call it a centerpiece. Call it a day.

Even Thanksgiving cleanup beats other holiday cleanups. Here’s a day in which leftovers are praised, nay, glorified. What pleasure there is in divvying the spoils, wrapping servings to share with those hitting the road. Or, conversely, in surveying the kitchen, being overcome by a sudden, liberating giddiness, then taking that plucked and picked carcass and dropping it, with nary a twinge, straight into the trash can.

Such a comfort, Thanksgiving. Reliable not only in its Thursday constancy, but also in its expectations, traditions, and reason for existence. Because in the end, that raison d’être is Thanksgiving’s greatest attribute: gratitude. Thanksgiving has nothing to do with giving and getting, or even the more genteel gerund “exchanging.” It’s about gathering, and sharing, and thanking. A time for genuine visits, and a sincere exchange of conversation, not gifts. And what is conversation but, so often, a gift of time? The hoopla and folderol endemic to other holidays is absent here, but the inescapable presence of why we gather is not: to appreciate. To give thanks. To be grateful. To be engulfed with gratitude. The bountiful table is merely a symbol, a metaphor for the boundlessness of our blessings.

But wait. We’ve forgotten dessert, including, but not limited to, apple, butterscotch, chess, sweet potato, and pumpkin pie. Caramel, carrot, and coconut cake. Persimmon pudding. Perhaps a cranberry cheesecake, but certainly nothing light or lofty. Did the Pilgrims eat ice cream? They did not. They ate hearty and heavy, and so shall we. As such, I never think of, or observe, Thanksgiving Day without recalling this passage from Laura Ingalls Wilder’s Farmer Boy, set on a farm in the 1860s, for its child’s version of a holiday feast, preserved in words:

“… at last Almanzo could open his eyes. He sat and silently looked at that table.

He looked at the crisp, crackling little pig lying on the blue platter with an apple in its mouth. He looked at the fat roast goose, the drumsticks sticking up, and the edges of the dressing curling out. The sound of Father’s knife sharpening on the whetstone made him even hungrier.

He looked at the big bowl of cranberry jelly, and at the fluffy mountain of mashed potatoes with melting butter trickling down it. He looked at the heap of mashed turnips, and the golden baked squash, and the pale fried parsnips.

He swallowed hard and tried not to look anymore. …

He squeezed his hands together between the knees. He had to sit silent and wait, but he felt aching and hollow inside.

At last Almanzo’s plate was filled. The first taste made a pleasant feeling inside him, and it grew and grew, while he ate and ate and ate. He ate till he could eat no more, and he felt very good inside.”

The tradition of Thanksgiving has changed little over the centuries. At tables simple or elaborate, wearing jeans or jewels, we celebrate with a feast. But far more important than an abundant table is that true essence of Thanksgiving: an abundance of appreciation. Thankfulness for all that we have as a family, a state, a nation. Because gratitude, like food, makes us feel very good inside.