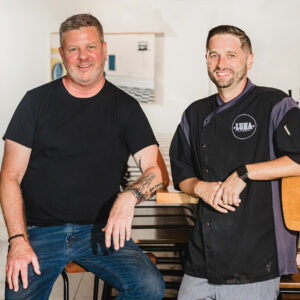 Richard Williams (left) and John Jefferson learned to make pizza in Italy before opening their restaurant. photograph by Baxter Miller

Richard Williams’s heart sank as he stood on the street in front of the Biverò Pizza Academy in Florence, Italy, during the summer of 2016. Months before, the East Carolina University professor had wired funds he’d received from a teaching award to register for a three-week course on making pizza. He had wondered then if he was signing up for an online scam. So when he arrived at Biverò and the building was closed, he panicked. But a few minutes later, the metal security gate was lifted, and class began.

In Italy, Williams learned how to make fermented dough and to lightly char Neapolitan pies in a high-temperature oven. He also began to research opening a pizza restaurant of his own — what would eventually become Luna Pizza Café in uptown Greenville.

As with many college experiences, the professor’s new studies had begun, in part, at a local pub. While Williams was teaching recreational therapy at ECU, he routinely met up with his colleagues at Carolina Ale House to debrief after Wednesday faculty meetings. John Jefferson was almost always their server. Before long, Williams and Jefferson had struck up a friendship. Then, Williams lobbed a hypothetical question: “If I’m ever crazy enough to quit my day job and open a restaurant,” he asked Jefferson, “will you work for me?” Jefferson responded with a hypothetical “yes.”

While studying at Biverò, Williams gained hands-on experience at a Florence restaurant that treated pizza as fine-dining fare, he says. “There’s no reason pizza has to be in a fluorescent-lighted strip mall with ranch on the side.”

So when he got serious about opening a place of his own, having retired from teaching in 2017, Williams looked for a spot in the heart of uptown. Then, he approached Jefferson, who had, by then, moved up the ranks at Carolina Ale House and was the general manager at a Raleigh location. “I knew that he had the hard skills for opening a restaurant,” Williams says. In addition, he offered to send Jefferson to Florence to learn pizza-making at Biverò. It was a no-brainer. “Who doesn’t want that kind of opportunity?” says Jefferson, who does most of the cooking at Luna these days. “From that moment on, I was hooked.” 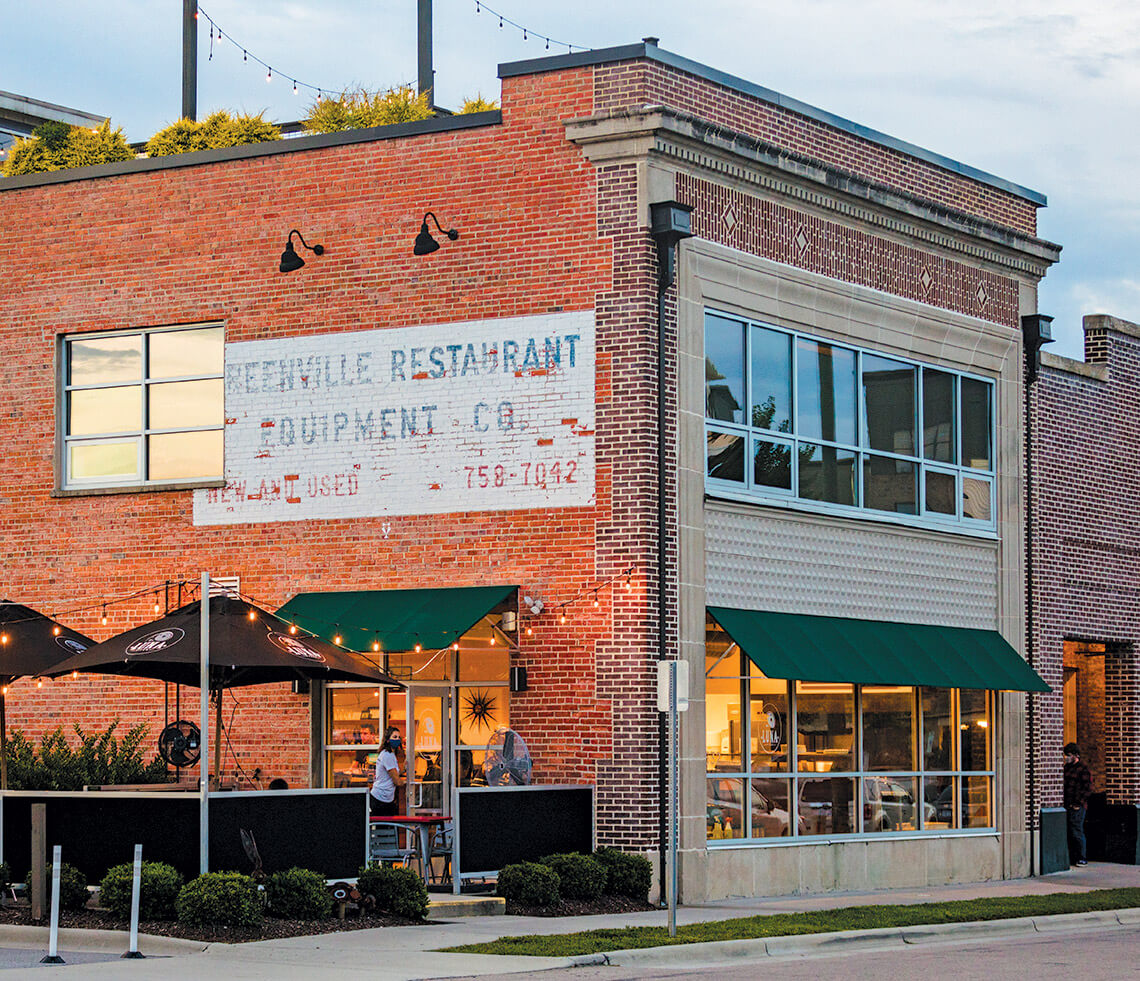 Luna is part of the Dickinson Avenue Arts District in uptown Greenville. photograph by Baxter Miller

In early 2018, Luna Pizza Café opened in a rehabbed Coca-Cola bottling plant, which has retained some of its original tiles and brick. True to Williams’s vision, the interior is warm with low lighting (no fluorescents). There’s also no ranch dressing — and no pepperoni. “It’s a frequent conversation,” Williams says of those choices. But, as he and Jefferson say in tandem, they can’t be everything to everybody.

Their menu features local ingredients like delicate hydroponic greens, dressed in a simple vinaigrette. And instead of pepperoni, there’s sopressata, an Italian salami made by San Giuseppe Salami Co. in Elon. Other ingredients are imported from Italy, including San Marzano tomatoes, which Luna crushes for its pizza sauce, and a shipping container’s worth of flour — the base of the restaurant’s five-day fermented dough. Cooked at high heat for about two minutes, the result is a thin, toothsome crust with a crisp exterior.

Williams has no plans to shift his studies again. Instead, he’s taking on more of the same and expanding. With Jefferson, he plans to open two additional locations soon — one near Raleigh and one in Selma’s forthcoming Old North State Food Hall. At both, they’ll offer their same well-researched pizzas. Hold the ranch, please.