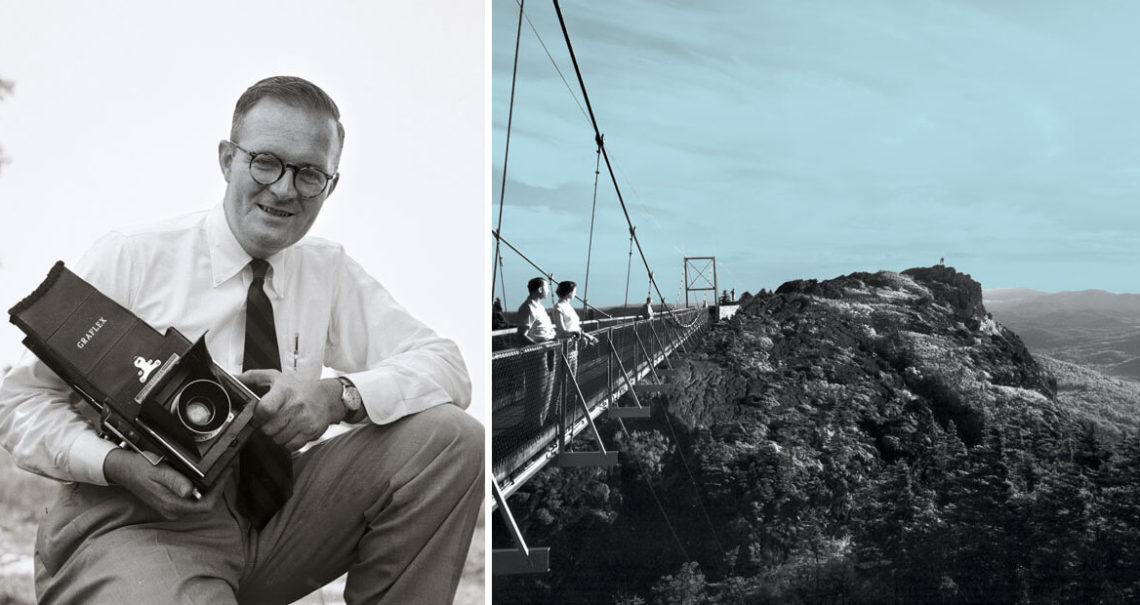 When Hugh MacRae Morton inherits Grandfather Mountain in 1952, he understands that the 4,500-acre tract is a spectacular legacy — more than a mountain cresting at Calloway Peak, more than near-vertical stands of spruce and hardwoods that have somehow survived the aggressive logging of his grandfather’s day, more than just real estate to be developed into homes and commercial enterprises. It is a treasure to be preserved for posterity. Morton has been a professional photographer for more than a decade, and he sees the familiar landscape with an artist’s eye for natural beauty.

He does develop it, in a way: to make it more accessible to visitors, to highlight the view from Linville Peak, and to ensure that the vast acreage surrounding the access road remains unspoiled — a wild haven for animals, trees, and plants. He becomes both an entrepreneur in the booming tourism trade and the guardian of the mountain.

He turns the single-lane toll road constructed over the original horse trail by his grandfather Hugh MacRae — president of the Linville Improvement Company — into a two-lane graded road. Previously, the road stopped about two-thirds of the way up the mountain. Travelers tethered their horses or parked their automobiles at Observation Point (later called Cliffside) — from where, on a clear day, they could see the skyline of Charlotte 80 miles away to the southeast — then hiked the steep, rocky trail to the top. 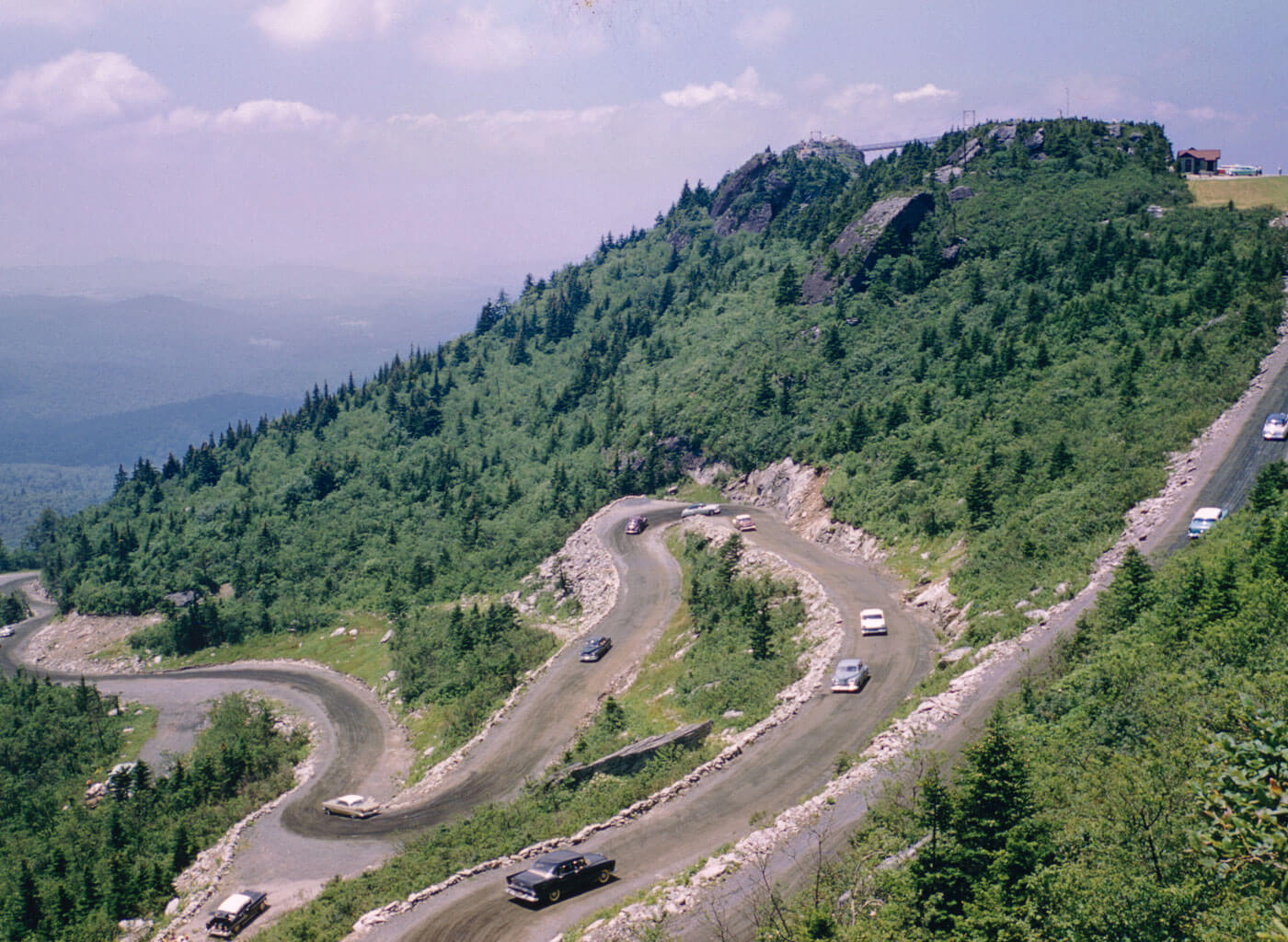 By the early 1960s, drivers could maneuver their cars to the summit of Linville Peak. Waiting at the top were the Mile-High Swinging Bridge and a visitors center called the Top Shop. photograph by hugh morton photographs and films #p0081, North Carolina Collection, wilson library, unc Chapel Hill

Morton extends the graded road to the summit of Linville Peak. As if arriving near the 5,946-foot-high summit of one of the most rugged mountains in the Southeast weren’t enough to lure drivers up the steep, curving track, he also erects a modern marvel on Linville Peak itself: the Mile-High Swinging Bridge, so named because it stands 5,305 feet above sea level. The 228-foot-long bridge spans a chasm 80 feet deep. The wooden deck of the bridge is suspended on cables between two steel towers. Between each of the deck planks is a joint, so when the wind blows — and it nearly always blows at this altitude — the bridge swings. It is anchored by stout steel cables bolted into the rock, spring-loaded with great coils to absorb the shock of the wind load — gusts of more than 100 miles per hour are not uncommon. The bridge is prefabricated in Greensboro and reassembled on site in three weeks. Gubernatorial candidate William B. Umstead dedicates it, and his 10-year-old daughter, Merle, is the first to walk across.

It is said that The Cherokee called the mountain Tanawha, after the “fabulous hawk” that nested there. Early settlers discerned in its craggy profile the face of a recumbent old man staring at the sky — in fact, several profiles from several vantage points — and called it Grandfather Mountain.

Grandfather is more than just a peak or even a series of peaks. It’s a spectacular, wild ecological island in the middle of the Blue Ridge Mountains. At Grandfather, visitors climb through 16 different habitats defined by topography, forest cover, and, above all, altitude. On a late spring morning when the temperature at the base is in the 60s, a thermometer at the summit might record 50. In summer, the temperature at the peak might rise as high as the 80s, and in winter, it can dip into the negative 30s.

Black bears roam the slopes and canyons, and cougars once hunted the twilit paths. Long ago, elk were plentiful — until they were hunted out in the 18th century. Now, only deer can be spotted furtively browsing. All told, more than 25 rare and imperiled animals inhabit Grandfather Mountain.

Both the Linville and Watauga rivers spring from Grandfather, as do a slew of creeks — home to brook trout and freshwater mussels, as well as river otters, beavers, and mink. The more than 20 species of salamanders at Grandfather include the two-pound hellbender, one of the largest salamander species in the world. 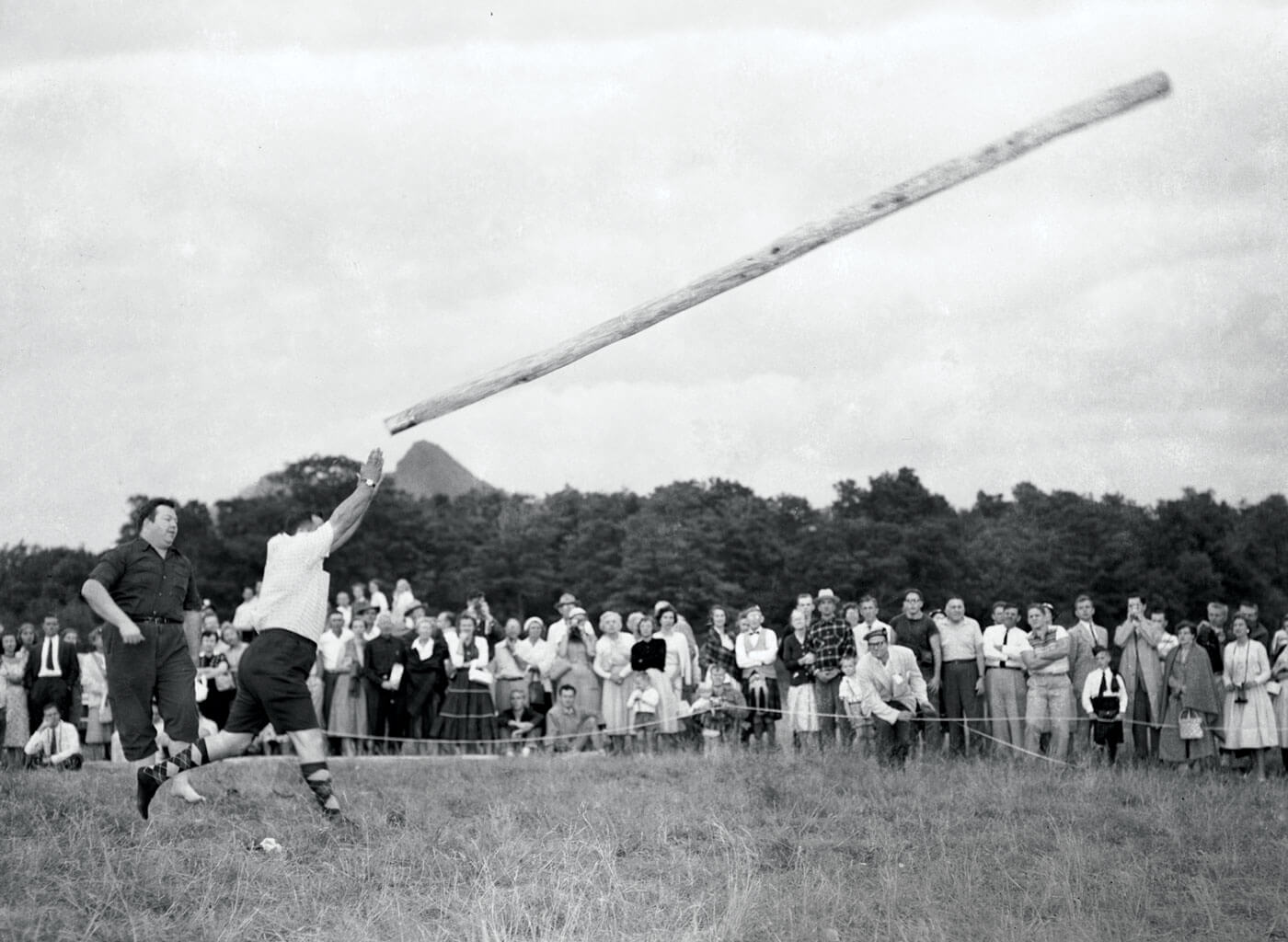 The woods and underbrush shelter gray and red foxes, long-tailed weasels, cottontails, two species of skunks, and the two-inch-long pygmy shrew — the smallest known mammal in North America. More than 100 species of breeding birds populate the cliffs, forests, and balds, including 20 species of warblers. At least five species of owls hunt the forests and clearings. The trees also harbor the northern flying squirrel and the golden mouse, which builds its nests up to 15 feet above the forest floor, high above the timber rattlers, copperheads, and a host of nonvenomous snakes that slither below.

Some of the caves on the mountain are home to Virginia big-eared bats, whose ears are a quarter of the length of their four-inch-long bodies.

The flora matches the diversity and spectacle of the fauna: Blue Ridge goldenrod, which blossoms in a spray of bright yellow flowers; bent avens — a species only found on three mountains — whose furry buds open into a white flower; and Heller’s blazing star, a 16-inch-tall stalk crowned by a brilliant spike of lavender flowers half as long. In the moss that grows on rocks at the foot of fir trees, the spruce-fir moss spider weaves its tube-shaped web.

Grandfather Mountain is a wild paradise for trees, plants, and the creatures that abound there. But its natural resources are nearly its downfall.

Humans have coexisted with Grandfather for millennia. Nomadic archaic peoples and Paleo-Indians moved through the mountain region for 10,000 years, percussion-flaking hard rock into projectile points. Later, the Cherokee and Siouan-speaking groups passed through the same territory. The Scots-Irish came to the Appalachians in the 1700s, following the Great Wagon Road west from Philadelphia. Daniel Boone hunted the area; even after moving across the Cumberland Gap, he returned to a seasonal cabin on or near Grandfather Mountain, where his nephew settled permanently.

In September 1898, John Muir, cofounder of the Sierra Club, climbed Grandfather Mountain while recuperating from a long bout of bronchitis. He’d been racked with fits of coughing and shortness of breath, but, far from exhausting him, the climb exhilarated him. He was so inspired by the panorama before him that, a friend recounted him saying, “I couldn’t hold in, and began to jump about and sing and glory in it all.”

John Muir said of Grandfather: “I couldn’t hold in, and began to jump about and sing and glory in it all.”

Where naturalists like Muir sought only discovery, commercial-minded businessmen saw an opportunity for riches. In 1888, Samuel Kelsey, founder of Highlands, enlisted a partner, Donald MacRae of Wilmington, and formed the ironically named Linville Improvement Company (LIC). They built a resort hotel at the foot of Grandfather, then scraped out a serpentine toll road from Blowing Rock, the Yonahlossee Turnpike. The company bought 16,000 acres, including nearly all of Grandfather Mountain, and proceeded to clear-cut the old-growth chestnut, locust, white pine, white and red oak, maple, cherry, and walnut. They logged so aggressively that the Linville area soon became known as Stumptown. By 1918, a narrow-gauge rail line, the East Tennessee and Western North Carolina Railroad, ran through Linville Gap for hauling the timber.

The company logged out the lower reaches first. By 1930, only the highest stands remained untouched. The LIC then sold timber rights to a contractor, Will Smith, to clear-cut the trees on the upper slopes. Smith laid eight miles of plank road, and the loggers went to work. When rains came in August 1940, the bare mountain became a cataract, washing away most of the community known as Grandfather. 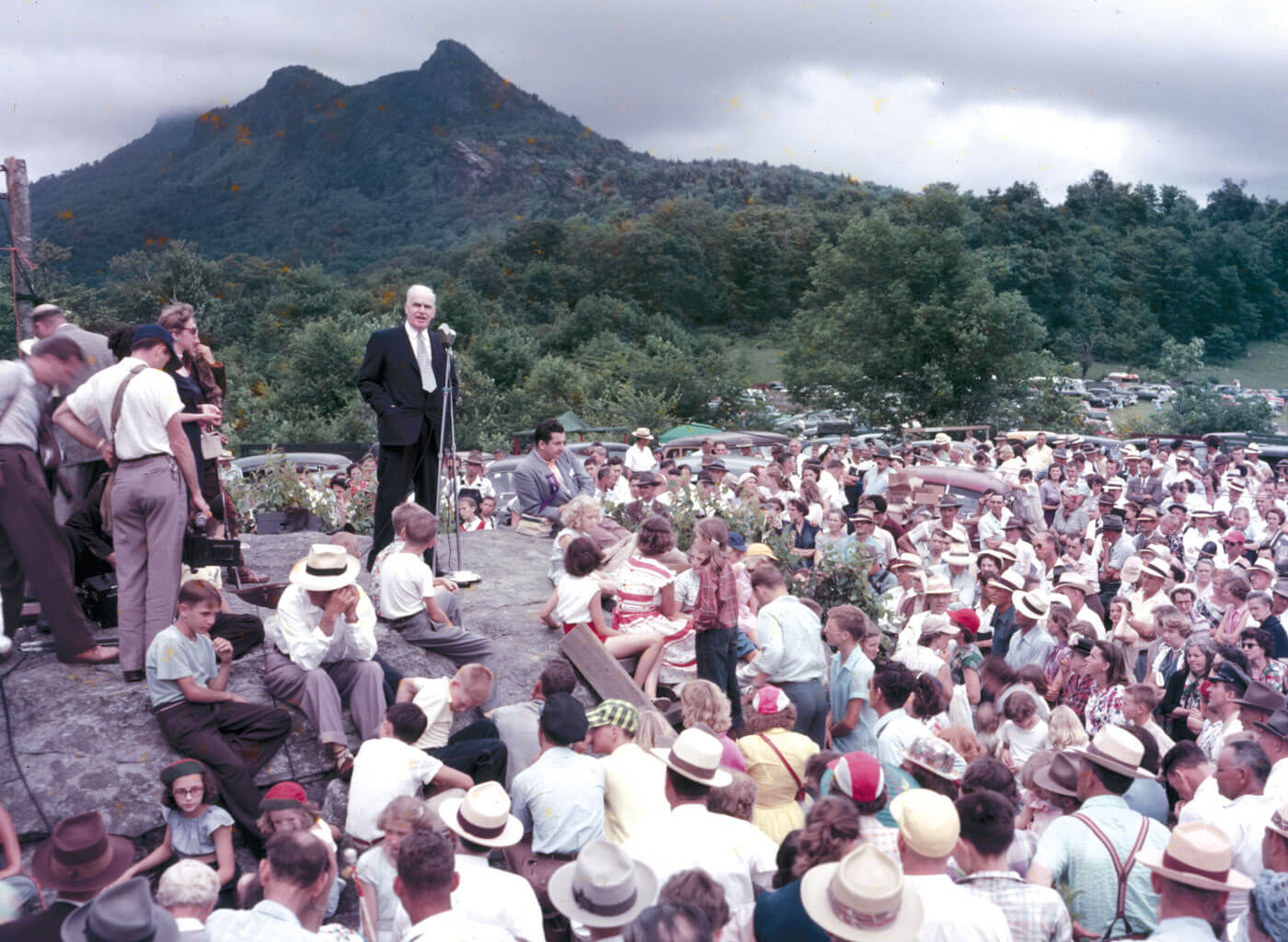 During the 1940s, Harlan Kelsey, a nurseryman and environmental activist, worked with the National Park Service (NPS) and the state to establish a park on the site of Grandfather Mountain. He negotiated a price with the LIC, by then known as the Linville Company and controlled by Donald MacRae’s son Hugh MacRae. The company wanted to be paid not just for the acreage, but also for the remaining timber value of the land — making the asking price too exorbitant for the modest budget of the NPS. The deal fell through.

By 1951, the NPS manages to buy 7,500 acres of Linville Gorge, in the vicinity of Grandfather Mountain, for Pisgah National Forest.

For Hugh Morton, Grandfather Mountain is a place for harvesting not timber but wonder. Yes, the visitors will provide an income stream — and with the finished road to the top, in addition to the Mile-High Swinging Bridge and a visitors center called the Top Shop, Morton turns Grandfather Mountain into one of the most popular tourist destinations in the South.

In June 1953, he adds a new wrinkle: a sports car “Grandfather Mountain Hill Climb” up the steep hairpin curves. And in MacRae Meadows, at the foot of the mountain, he carries on a tradition that dates to the 1920s, “Singing on the Mountain,” an old-time gospel convention. To that meadow come the annual Highland Games, a celebration of Scottish heritage complete with food, dancing, bagpipers, and athletic competitions like the tug-of-war and the caber toss — in which contestants hurl a nearly 20-foot-long log into the air so that it spins end over end and lands facing away from the tosser, as the old-time loggers were said to have thrown logs into streams.

One last controversy boils up as the NPS plans to extend the “missing link” of the Blue Ridge Parkway over Grandfather, tunneling through the summit. Morton fights this plan, and after many years, a compromise is reached: the S-shaped Linn Cove Viaduct, which clings to the mountainside with minimal impact.

At the top of Grandfather Mountain, through the gorge under the Linville summit, the wind blows nearly constantly, bending the branches of the spruce trees in a permanent “banner” effect. A hiker standing in mid-bridge can feel the wind pushing like an insistent hand, hear the cables hum as the bridge deck rocks. Mornings in spring can bring both high winds and dense fog, so that, to a hiker peering into the clouds all around, the anchoring bridge towers on the cliffs are invisible, and the sensation is that of sailing through the air, a kind of thrilling vertigo — and an illusion, because it is the air, not the bridge, that is sweeping through the gorge. But the illusion is a powerful one, of flying headlong into timeless space.