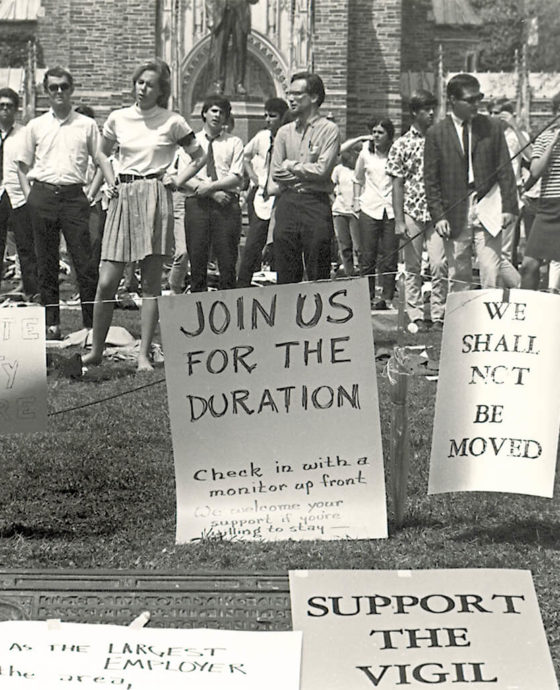 For the civil rights movement, it is a time of progress too often punctuated by fatal gunshots.

A sniper kills President John F. Kennedy in Dallas in November 1963. Almost five years later, in June 1968, his brother Robert F. Kennedy is gunned down in the pantry of the Ambassador Hotel in Los Angeles after winning the California Democratic presidential primary.

In between, other killings bloody the movement: In June 1963, NAACP leader Medgar Evers is shot down in his own driveway in Jackson, Mississippi. Hundreds of black protestors take to the streets. Many are beaten and arrested by a phalanx of white police officers. The shooter, a white supremacist named Byron De La Beckwith, faces trial twice in 1964, but juries cannot reach a verdict — despite the fact that his fingerprint is found on the scope of the high-powered Enfield rifle used in the murder and his face is bruised where the recoil bucked the scope into his eye socket.

The most shattering blow to the civil rights movement occurs on Thursday, April 4, 1968, in Memphis: the Rev. Dr. Martin Luther King Jr., a charismatic leader of the movement, is shot to death on the balcony of the Lorraine Motel. Outrage at his assassination ignites violent protests in a hundred cities nationwide, including Washington, D.C. — leading to some 40 deaths.

In Durham, home to a large population of African-Americans, King’s assassination incites the largest student demonstration in the history of Duke University. It’s been just five years since Duke began admitting black undergraduates, including William Turner, who learns of the news on his way home from a physics exam.

“That night is a blur except that I watched the news over and over, and saw the eruptions beginning to develop all over the country,” Turner later recalls. “And of course Durham was caught in it, too. And so the question on campus was, ‘How shall we respond?’”

Student leaders organize a march on Duke Forest, a faculty residential area, on the following day, Friday, expecting about 20 students to join them. Instead, some 450 gather in the rain to parade to the home of the university president, Douglas Knight.

Knight is taken by surprise when some students enter his house. He then welcomes the student leaders into his home, and the talk focuses on a list of student demands for action:

1. Endorsing a newspaper advertisement calling for a day of mourning and urging all Durham residents to work toward racial equality.
2. Instituting a minimum wage of $1.60 per hour and collective bargaining rights for nonacademic staff, many of whom are African-American.
3. Resigning from the segregated Hope Valley Country Club.

Knight does not accede to their demands. Some of the students remain in his home overnight and wake Saturday morning to the arrival of a “crisis team” of seven Duke administrators, whose aim is to de-escalate the situation, keep it from turning violent like so many others around the country. Knight allows the students to remain in his home, and, that afternoon, he presides over a memorial service for King in Duke Chapel. But when the chairman of the board of trustees, Wright Tisdale, learns about the student occupation, he flies to Durham, determined to evict them. An intense debate breaks out among trustees, administrators, and alumni about what they should do next.

Then, unexpectedly, Knight is removed from the debate — for medical seclusion. His doctor is concerned that the stress will endanger his recovery from a severe case of hepatitis he suffered in the fall. Students are largely sympathetic — Knight is respected as one of the more reasonable administrators, and he and his wife, Grace, have treated them courteously. They leave him in peace, even designating a cleaning crew to put his house back in order.

The students shift their demonstration Sunday night to the main quad in front of the chapel. More than 500 join, sitting quietly on the lawn in eight rows. On rope lines and on the ground, they post signs that read “We Shall Not Be Moved,” “Support the Vigil,” and “Join Us for the Duration.” They do not sunbathe or play around. The leaders, aided by volunteers wearing armbands, enforce strict discipline: No violence — and no talking except during specified breaks. It is a time of reverence for King and of serious, concerted action for social justice. Thus is born the Silent Vigil.

By Monday, the crowd numbers about 1,000. Campus dining hall employees strike because the wage demand has not been answered, and soon, nearly 300 employees join the picket lines. Fraternities and independent houses add their support. On Tuesday, the vigil crowd has swelled to 1,400, William Turner now among them. Robert F. Kennedy sends an encouraging telegram.

On Wednesday, April 10, the crowd numbers 2,000. Students, faculty, and administrators hold hands and sing “We Shall Overcome,” the old strikers’ song, now a civil rights anthem.

Cook tells the students, “Martin Luther King would call you drum majors and majorettes for justice and humanity.”

The sole African-American professor at Duke, a college classmate of King’s named Samuel DuBois Cook, returns from the fallen leader’s funeral and addresses the crowd. His speech lasts less than 10 minutes but inspires with its soaring rhetoric: “Just as it is hard to believe that Martin Luther King is dead, it is just as difficult to believe that a movement for social justice and equality, a movement to create the beloved community, is alive here at Duke. The light from your candle, I can assure you, is reducing the darkness in this world.”

At a moment of great national sorrow, he sees hope in their vigil. He tells them, “This is a great moment. Like Martin Luther King, my eyes, physically now, have some vision of the glory of the coming of social justice to this country because of you. Martin Luther King would call you drum majors and majorettes for justice and humanity and great witnesses for the beloved community.” 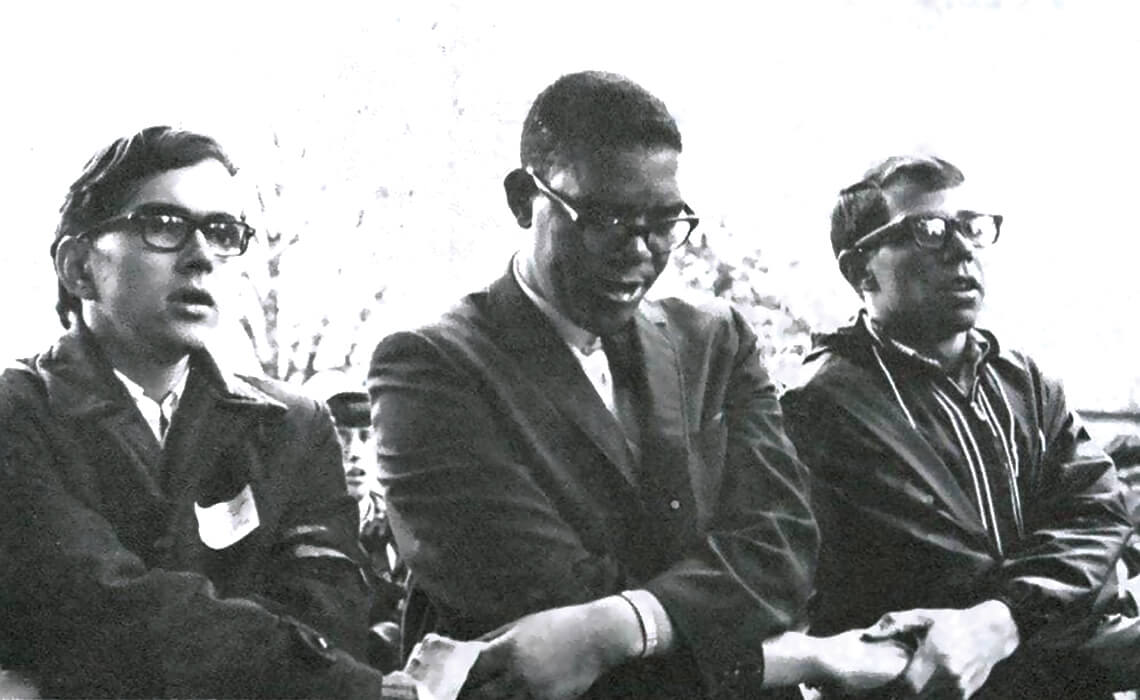 Dr. Samuel DuBois Cook (center), a close friend of King’s and the only African-American professor at Duke at the time, addressed the crowd on April 10. “This is magnificent,” he told them. “You are making profound history.” photograph by Duke University Archives

It is expected, Cook tells them, that the oppressed will rise up against oppression. But for those raised in privilege — like so many of these white students — to take on the fight is a new thing: “I haven’t seen anything like it. … You are standing for the highest good and the public interest, including Duke’s interest. Duke’s interest cannot be different from that of justice and equality, the best in the American tradition.”

In the last half of the speech, he reflects on King’s funeral. “As I saw from afar the casket carrying his lifeless body, I was sustained by the knowledge that a thousand or more bodies full of life, integrity, and vision were carrying on his legacy in the spirit and in conformity with his ideals and his methods. I was uplifted by the fact that you had made his mission your very own — and I’m sure that Martin Luther King would be proud, mighty proud, of you.”

Tisdale, the chairman of the board of trustees, steps to the microphone to deliver the official response. He announces that Duke will indeed raise its minimum wage to $1.60 per hour by July 1, 1969, and a committee will be charged with investigating the university’s relationship with and treatment of its nonacademic employees. He tells the crowd, “I am sure that at this time of personal anguish and national turmoil, Duke University has a special role to play. I want it to fulfill this role and to realize its capacities for leadership. This, I am sure, is also your hope. We cannot achieve this promise divided among ourselves, but we can together.”

Some of the more radical students are not pleased, but with so many of America’s cities in flames, the real triumph of the Silent Vigil is its peacefulness. Difficult negotiations, impassioned arguments, and robust, principled debate in the context of racially charged events have resulted in some progress, a modest start toward racial justice. Students by and large trust the administrators to make good on their word.
Turner later describes the change, the moment of inflection that cast Duke into the national spotlight in a nonviolent push for civil rights: “You have a Southern way of life, a Southern orthodoxy … where everybody has their place, where everything is tiered. Now the question would be whether or not people come here to learn how to do that more perfectly — to perpetuate this Southern orthodoxy and tiered society. Or is this a place where people can come and participate in the opening of society?”

The Duke Chronicle editorializes on the progress: “We must not let the new Duke University created by the Vigil die, for in it lies our destiny.”

In the words of Cook, champion of King’s “beloved community”: “Your vigil here wiped my tears and helped to sustain me and provided, even at a tragic moment, roses for my soul.”