On Martin Luther King Jr.’s birthday, January 15, 1971, a delegation of Black students at John T. Hoggard High School presents a simple request to their principal, C.D. Gurganus: Allow us to honor him, writes Wayne Moore, then an 11th grader. “We just wanted a pause, some kind of memorial held in the school’s auditorium, in the name of Dr. King and all that he had accomplished.”

Wilmington is laboring through a third year of court-ordered desegregation of its three public high schools. This is a moment that could defuse the smoldering tension among Black students who feel like beleaguered refugees at their new school.

The administration dismisses their request.

During lunch that day, two dozen Black students gather around tables in the cafeteria, angry at being turned down. One of them, William “Joe” Wright Jr., grabs the microphone in the campus radio booth and tells the whole school that they are staging a sit-in to honor Dr. King.

Fifteen students, including Moore, are expelled.

On June 26, 1968 — against the objections of the Black community — the New Hanover County Board of Education voted to close Williston Senior High School and redistribute its 1,100 Black students among the two white high schools, New Hanover and Hoggard. Chairman Emsley Laney explained, “we felt it would be very difficult to integrate Williston High School and send white students there. It was in a black neighborhood …” 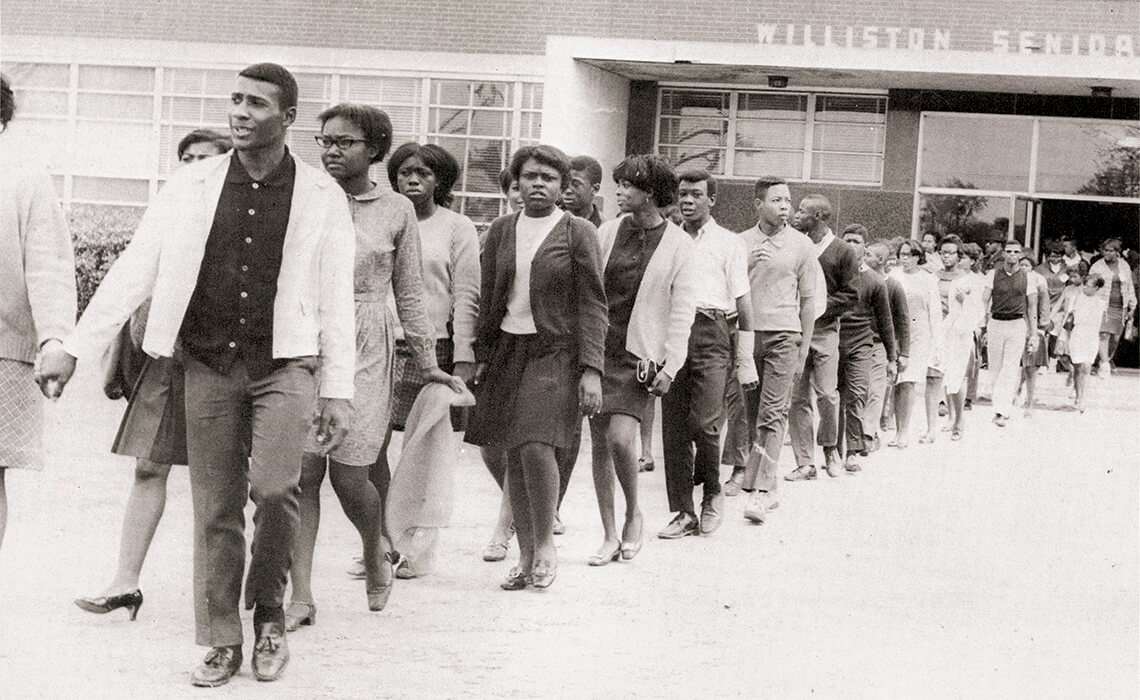 Before the Board of Education closed Williston Senior High in 1968, the beloved school’s yearbook paired this photo with the words of Dr. King: “We must live together as brothers or perish together as fools.” photograph by Cape Fear Museum of History and Science, Wilmington, NC

For generations, Williston was an engine of upward mobility in the Black community. It traced its origins to 1865, when the American Missionary Association arrived in Wilmington to set up classes in local churches for recently liberated Black people. Williston teachers were revered in their community. In his memoir, Moore writes, “If this book had a million pages, it still wouldn’t be enough to completely convey the bone-deep, heart-deep, pride-deep — love-deep — place Williston Senior High School occupied for generations …”

Hoggard, opened in 1967, is a modern facility on a 67-acre suburban campus about five miles southeast of Williston — a 40-minute bus ride for some Black students. Instead of being able to walk home from after-school activities, many Black students find themselves stranded far from their neighborhoods or else unable to participate. And while racial confrontations happen at both high schools, Hoggard becomes the flash point. Black students endure name-calling and physical abuse from white students, and they must also fend off belligerent white non-students who infiltrate campus.

“If this is the welcome that the Williston faculty members get, just how will the black students be treated?”

The MLK birthday sit-in and expulsions mark a turning point. Students meet with the superintendent, Dr. Heyward C. Bellamy, on January 26 and urge him to investigate. When it appears that he will do nothing, they decide to boycott classes. Their numbers quickly swell to the hundreds.

On January 27, two representatives of the boycotting students ask the Rev. Eugene Templeton, the white pastor of a Black congregation, for permission to use the Gregory Congregational Church as a meeting place. Besides the MLK expulsions, Templeton learns that a Black student was struck with a bottle in a melee near New Hanover High. “When the matter was brought to the attention of the principal by the black girl, he suspended her for missing class,” Templeton later writes. “No further action was taken by the school authorities to find out who the white boy was.” And there is more: A coach has beaten a Black student over the head. Faculty and police have harassed Black students.

The students barricade themselves inside the brick church, which “seemed like something out of a fairy tale, like a castle, some place strong and safe,” Moore later writes, and Templeton sends for help. Who answers his call? A passionate young activist named Benjamin Franklin Chavis Jr. 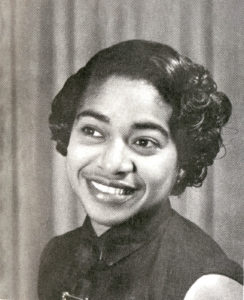 During her 14 years at Williston, librarian Bertha Boykin Todd became a mentor and confidante to students, and now she assumes that role at Hoggard, where she is transferred along with about half of the Williston faculty — to a chilly reception. She writes, “If this is the welcome that the Williston faculty members get, just how will the black students be treated?”

She declares that she belongs to all students, no matter their race or politics. At one point, she heads off an unruly crowd of students marching down the hallway toward an apparent confrontation and shepherds more than 300 of them into the gym for an impromptu assembly — a peacemaking session that lasts four hours.

“Mrs. Todd … was sort of a legend for a lot of us black students at Hoggard,” Moore writes. She “wasn’t just charming. She had ideas.”

She stocks the library with books by and about African Americans. She creates the “Viking 16,” named for the school’s mascot: eight Black and eight white students who pledge to work together to de-escalate tensions. She buys a used car and gives it to a football player so that he and his fellow Black players have a ride home after practice. Most significantly, she organizes a series of lunch-period “speakouts,” allowing white and Black students to air their thoughts freely.

Benjamin Franklin Chavis Jr. makes an indelible first impression. Charles Jones, one of the leaders of the boycott, watches the 23-year-old activist arrive “in a 1970, royal-blue-with-a-half-white-vinyl-top Eldorado. He was wearing a brown fur coat and a big Afro — he looked more like a pimp than a revolutionary.” Todd fears that he is too young to provide the students with steady leadership.

Chavis begins his first press conference on February 2 with a chant: “Black power! Power to the people!” Then he reiterates the students’ demands — including reinstatement of the students expelled on MLK’s birthday — and a deadline for a response: noon the following day.

“Ben Chavis had snatched my breath,” Moore writes. “His charisma was that powerful, like a wind blowing us away.”

The next night, armed white people fire on Gregory Church — some likely from a group calling themselves the Rights of White People. Three businesses are torched. Fearing more violence, Templeton pleads with the mayor and police chief for a curfew. He is refused. The next day, hundreds of Black citizens march peacefully to City Hall to demand protection but are also refused. Some of the students now carry weapons for self-defense. That evening, the Rev. David Vaughn stands outside the church, urging students to disarm themselves. Suddenly, a motorcade of white vigilantes opens fire, and Vaughn falls, peppered with buckshot. 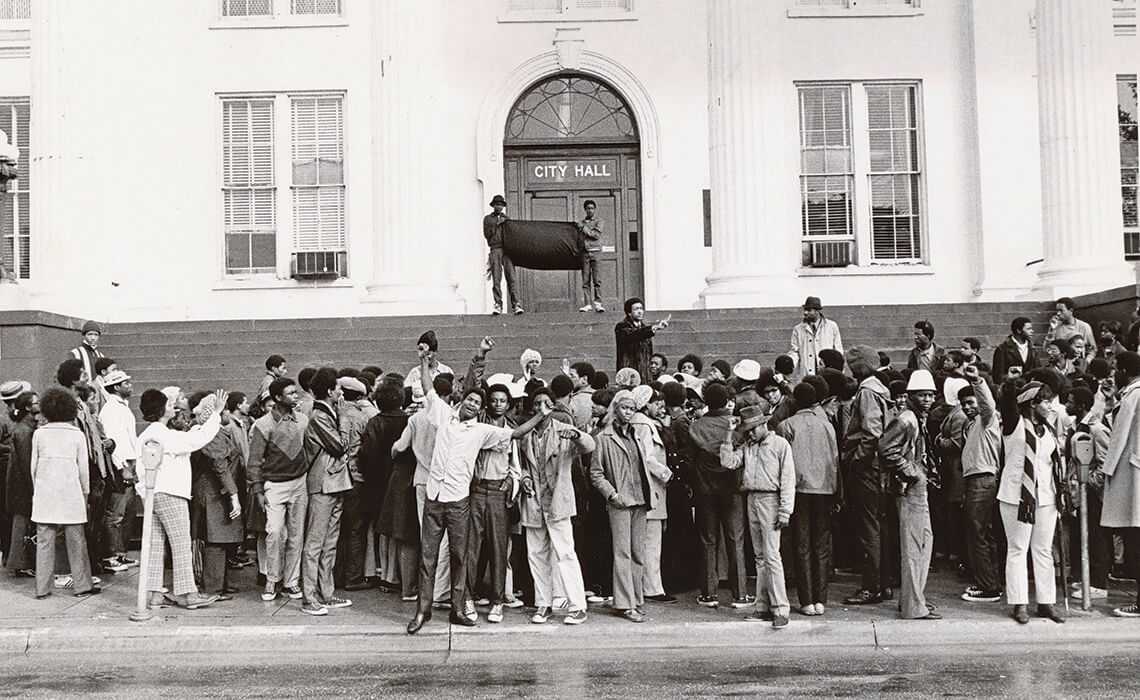 As the white vigilantes step up their attacks, an armed cadre joins the students — some soldiers and ex-soldiers — and they may or may not be responsible for the firebombings that ensue. Between February 5 and the end of the month, 20 more buildings go up in flames. One is Mike’s Grocery, across the street from Gregory Church, seen as a staging area for the vigilantes. At around 10 p.m. on February 6, as it burns out of control, a policeman shotguns to death a young Black man named Steve Mitchell, who is standing nearby. Police claim that Mitchell had his own shotgun, but his friends say he was unarmed.

Moore reports that at the time of the Mike’s Grocery fire, he was babysitting his sister’s kids about a mile away.

Templeton and his wife tell police that 50 bullet holes were fired into their parsonage, but they get no help. Police erect barricades around the church, but somehow, white vigilantes drive through.

The next morning, a white supremacist named Harvey Cumber drives through police lines in his pickup and draws a gun, advancing on the church. He is shot and killed. Now, Mayor Luther Cromartie imposes a 7:30 p.m. curfew, and the governor orders in the State Highway Patrol and the National Guard, who storm the now-vacated church.

A hue and cry erupts from the white citizens to hold someone accountable for the mayhem — but it’s hard to know who exactly did what. Police and the FBI target Chavis. Over three months, they arrest the 10 individuals who are eventually charged with arson and conspiracy to commit arson, and conspiracy to fire on police and firefighters: Reginald Epps, Jerry Jacobs, James McCoy, Wayne Moore, Marvin Patrick, Connie Tindall, Willie Earl Vereen, Joe Wright, a white social worker named Ann Shepard — and Chavis.

The first jury selected consists of nine Black and three white jurors, and the prosecutor, Jay Stroud, engineers a mistrial by feigning illness. Selecting a new jury, he uses 41 of 42 peremptory challenges to exclude Black jurors. A key witness for the prosecution is Allen “Big Al” Hall, a large, violent man with a history of mental instability who, during the pretrial hearing, leaps from the stand to attack Chavis and his attorney. A second is Jerome Mitchell, himself indicted for robbery and murder, dealing for leniency. The weekslong trial ends on October 17, 1972, after three hours of deliberation: guilty. The defendants’ combined sentences: 282 years.

Several years later, all three key prosecution witnesses recant their testimony. In 1978, Gov. Jim Hunt commutes the Wilmington Ten’s sentences but declines to grant a pardon. Chavis, the last to be paroled, leaves prison just before Christmas 1979. Finally, in December 1980, the U.S. Fourth Circuit Court of Appeals overturns all 10 convictions, finding that the “guilty” verdicts were based partly on perjury and prosecutorial misconduct.

In 2012 — 40 years after their original conviction — Gov. Beverly Perdue signs a “pardon of innocence” for the Ten. Justice of a kind has been served, but far too late.

The students’ adult leaders failed them, closed their beloved school, left them unprotected from racist bullies, deprived them of a fair chance to learn and participate. So one day, a handful of them stood up in a high school cafeteria and declared their principles. And they would not sit back down.