Inspired by the work of a famous writer whom she has never met, a young Black social worker from Columbia, North Carolina, sets out on a decade-long odyssey that will change her life, the life of her daughter, and the lives of thousands of strangers.

Dorothy Spruill Redford is one of millions transfixed by Alex Haley’s monumental saga Roots, a best-selling book and TV miniseries that chronicles the abduction and enslavement of Haley’s ancestor Kunta Kinte from West Africa in 1767, as well as the six generations that followed. Redford, 33 years old and single, is living in Portsmouth, Virginia, when the series airs in 1977. Her 13-year-old daughter, Deborah, watches it with her. 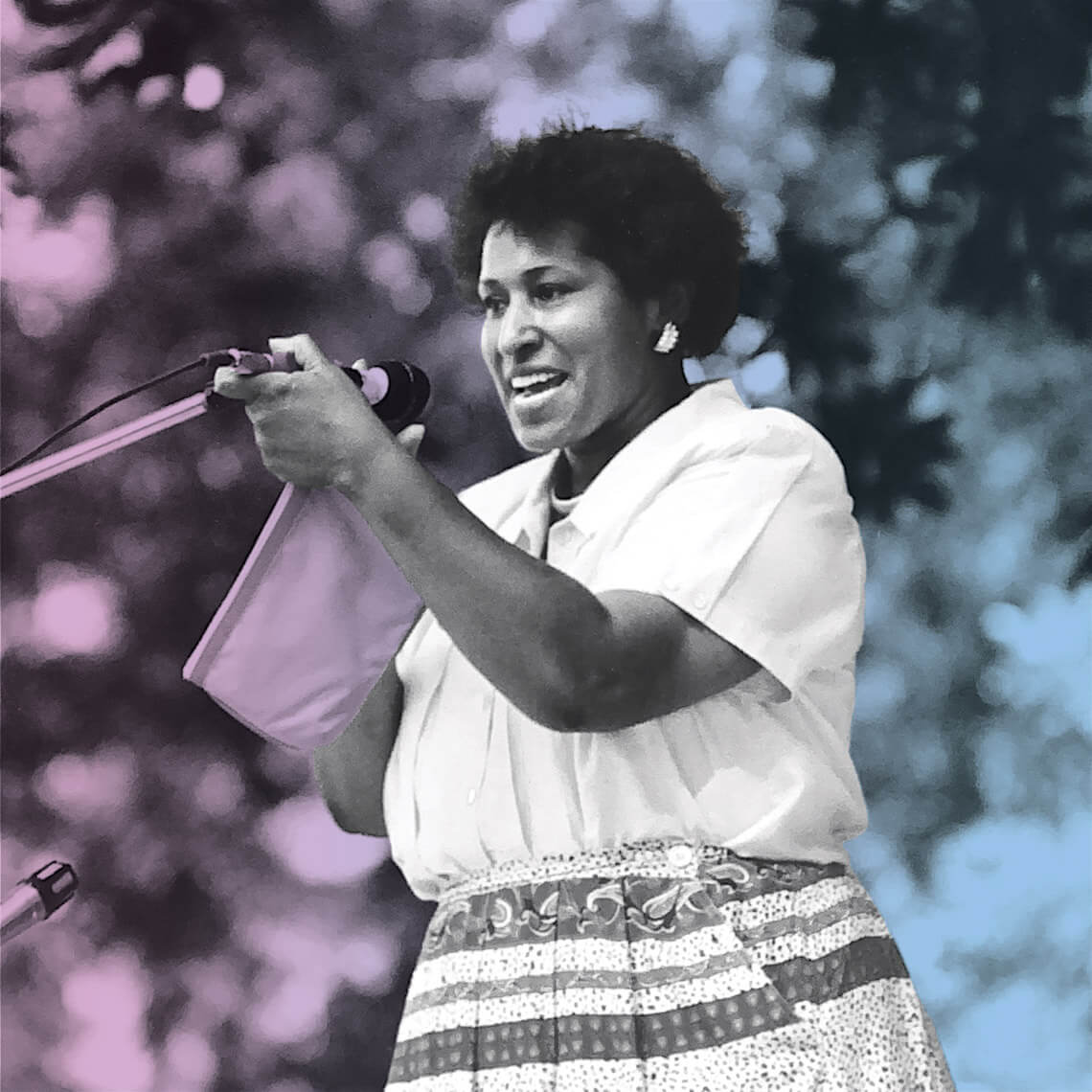 Redford’s own family history has taken her from her home in Columbia to Portsmouth, then to Queens, New York, back to Virginia at age 11, to Queens again after high school, and finally again to Virginia — a series of moves that leaves her feeling unmoored from her past, facing many vexing questions. “I was too busy with the here and now to think about there and then,” she later writes in Somerset Homecoming, a personal memoir steeped in meticulous primary research and written with a deep and lyrical passion. “It wasn’t just me facing the questions now,” she writes. “Deborah wanted answers too … ‘Who were my great-grandparents? Where did they come from? Were they slaves? And their parents, where did they come from?’”

She concludes: “My daughter was demanding her past, but I could not give it to her without discovering my own.”

She begins with questions to family, especially her mother, who reminisces about people from her past with “over de river” names — that is, an older generation of relatives from her own father’s past in the countryside west of Columbia, near Creswell and Lake Phelps. Redford knows him as Poppa. His full name is James Ed Littlejohn.

“My daughter was demanding her past, but I could not give it to her without discovering my own.”

“Then one day my mother mentioned a name that meant more to me than any of the others. Alfred Littlejohn. Poppa’s father. My great-grandfather on the Littlejohn side.” A tenant farmer about whom little has been recorded, who migrated from Creswell to Edenton and who died in 1925.

Redford’s search for roots now takes her into vaults of census data and property deeds in Edenton and Norfolk, Virginia; birth, marriage, and death records in Washington County and the parish register from St. David’s Chapel; and financial transactions as she looks for family names that strike a chord of recognition. And there, in the 1870 census — the first to list now-emancipated Black people by name instead of enumerating them as property — she discovers the name she has been searching for the hardest: “Alfred Littlejohn, born 1847 — a slave.”

Through hundreds of hours of cross-referencing census data and other records, she traces the lineages of 21 families whose ancestors toiled among the more than 850 enslaved people on Somerset Plantation.

Somerset began in 1784 as a joint venture between Josiah Collins, a native of Somersetshire, England, newly arrived with his son, Josiah Collins II; a local businessman named Nathaniel Allen; and Samuel Dickinson, a physician. Their initial plan was to drain Lake Phelps (then Lake Scuppernong) and put 100,000 acres of rich soil under cultivation. Collins dispatched the slaving brig Camden to West Africa, and it returned 18 months later with a cargo of 80 African men to be put to work hand-digging six miles of canal from the lake to the Scuppernong River — arduous, often deadly work through a malaria-infested swamp, the natural habitat of alligators, venomous snakes, and other predators.

Imprisoned in a strange land, far away from family and home, and overcome with grief, many walked into Lake Phelps and drowned. Still others dared to disappear in the vast swamp as runaways, usually hunted down by relentless slave-catchers.

“This was no state celebration, no public relations showpiece. This was our homecoming.”

Collins eventually bought out his partners. When he died in 1819, Josiah Collins III — a Harvard graduate and one of seven grandchildren — inherited 5,000 acres, including Somerset Place, and 100 slaves. Under his management, Somerset became one of the most profitable slave plantations in the South, and Josiah Collins III the third-largest slaveholder in the state. In 1860, 328 enslaved workers, including household servants, skilled tradesmen, and field hands, kept the enterprise running under a strictly regimented system that confined them to the plantation grounds.

Now, in the early 1980s, Redford researches the brutal day-to-day reality of her ancestors’ lives and makes a heartbreaking discovery: They have been erased from the history of Somerset. Since 1969, Somerset has been officially a state historic site, drawing thousands of visitors every year. But tours and interpretation have focused almost exclusively on the restored Collins mansion, furnished with period artifacts of the white slaveholder class.

As historian Alisa Harrison notes, “The state’s goal of animating the distant past for the use of contemporary consumers required the wholesale obliteration not only of the slaves’ presence but of one hundred years since the end of the Civil War.” 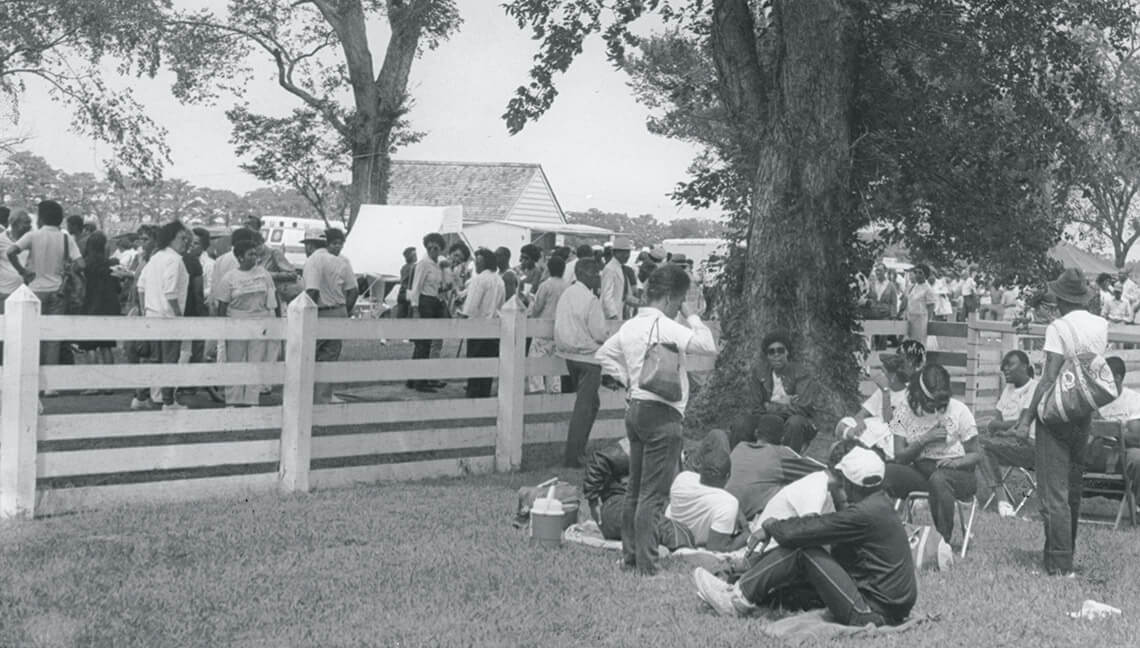 The inaugural Somerset Homecoming drew attendees from around the country, including descendants of both enslaved workers and the Collins family. Photography courtesy of NORTH CAROLINA STATE HISTORIC SITES

Redford receives a grant to study papers related to Somerset at the State Archives in Raleigh. One day in January 1985, she approaches Larry Misenheimer, who is in charge of the state’s historic sites. “ ‘We are going to have a homecoming of the descendants of Somerset Place,’ I said. ‘Can we use the site?’” He agrees, adding that they can link the event to the 400th anniversary of the founding of the Lost Colony at Roanoke Island.

But she is resolute. “This was no state celebration, no public relations showpiece. This was our homecoming.” And it must happen in 1986, the 200th anniversary of the landing of the first 80 enslaved Africans to work at Somerset. It will take place on the Saturday of Labor Day weekend.

Redford sets out to find descendants and engage the help of allies in her project: She scours the countryside around Creswell and Columbia, knocking on doors, sitting on front porches and at kitchen tables; speaks at churches far and wide; mails out letters and flyers to every descendant she can track down and anyone who might be able to spread the word. She writes to state officials, hoping to enlist their cooperation. But at first, the response is disappointing. “No one was getting it,” she later writes.

Redford also invites Alex Haley, but he has sent his regrets — he will be aboard a ship at sea, working on a new book. And despite repeated letters to Gov. James Martin’s office, inviting him to attend, she has received no reply.

The event becomes a ceremony of healing and resolution, reconnecting long-separated family members.

Then a story published in a Norfolk, Virginia, newspaper triggers mail and phone calls from Florida to New England. In July, a staff writer for The Washington Post calls excitedly to tell Redford that her article, “Descendants of 21 Slave Families to Gather,” has made the front page. The story goes national.

The state sends crews to repair and paint the big house and spruce up the grounds. Signage is placed along access roads. Volunteers and Somerset staff arrange for food and activities, along with dancers, artists, musicians, and actors. Those who come will see how their enslaved ancestors lived, including traditional celebrations like a slave wedding ceremony. A reenactor will bring Harriet Tubman back to life. It’s going to happen. But will the weather cooperate?

“The day dawned like any other at Somerset …” Redford writes. “A moist chill was in the air. That was good. The day would be cool.”

And then come the descendants — some 2,000 of them, some whose forebears were enslaved, a few others related to the Collins family: from New York, Seattle, California, Maryland, Washington, D.C., and numerous other places far and wide. Though some have worried that the event might be painful, an occasion for blame and recrimination, in fact it becomes a ceremony of healing and resolution, reconnecting long-separated family members, endowing the lives of their enslaved ancestors with the dignity and recognition they have been denied for so long. 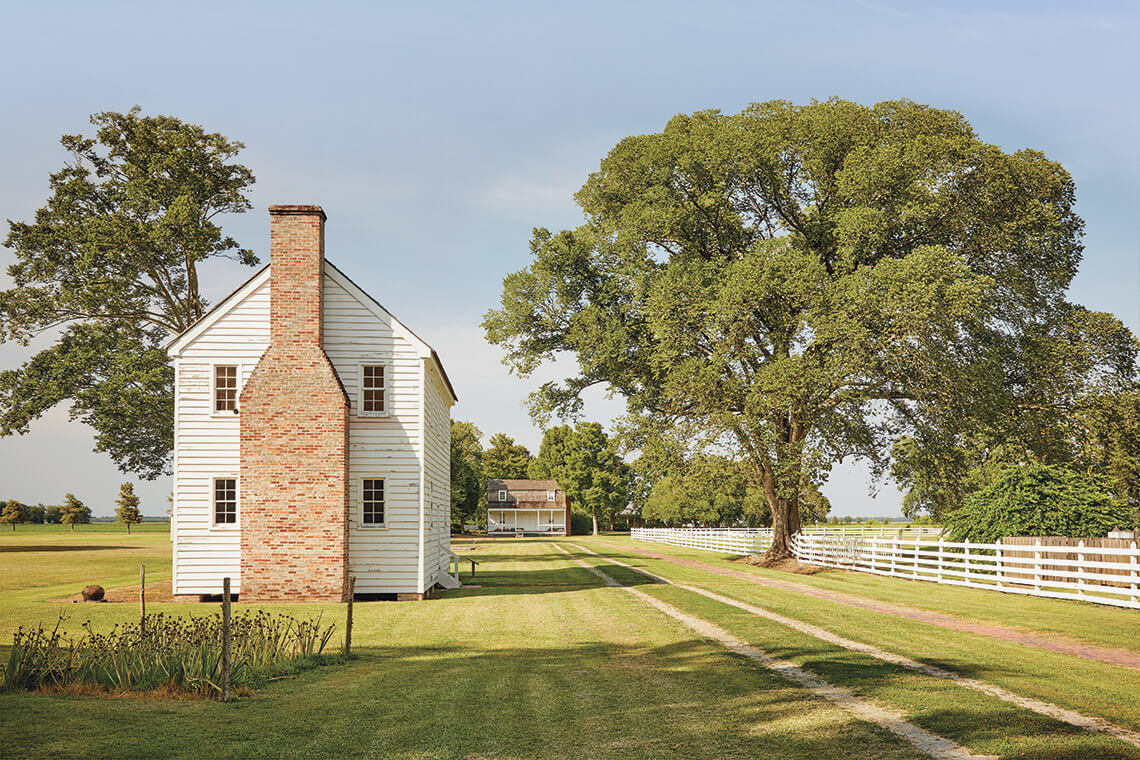 From 1990 to 2008, Redford served as director of Somerset Place State Historic Site, overseeing reconstruction of the enslaved community’s hospital. photograph by Chris Rogers

Barbara Eason Gadson, who spent her childhood near Somerset and now lives in New York, speaks for many of the descendants: “Now, I don’t feel bitterness. I feel we are found!”

A helicopter arrives bearing Governor Martin. He asks the crowd, “Did you hear it? Did you hear the sound in your head calling you home?” But the real surprise guest of honor is someone else. “As I stood watching the performance of the slave wedding ceremony, I felt a tap on my shoulder,” Redford writes. “I turned around, and there was Alex Haley … I screamed and grabbed that poor man, squeezing the life out of him.”

The Somerset Homecoming tradition takes hold, with five more public gatherings over the next 15 years. After that, individual families of the descendants continue to hold private reunions on the grounds. Lives once erased from history have been restored. Thanks to the tenacity of one visionary woman, their stories have come home.