Through a clear summer sky, GOV. JIM HUNT’S sleek, thrumming HELICOPTER swoops over dense forests, watery stands of bald cypress, and disused rice fields along the Cape Fear River, then descends on the grounds of ORTON PLANTATION. It alights on the broad expanse of neatly mown lawn, surrounded by live oaks and colorful hydrangea blooms stirred by the artificial breeze. Across the lawn stands the great white MANSION, its entryway pillared by four tall, fluted columns.

Capra discovered the Orton house on the cover of a magazine, and now it will become the principal location for shooting the new Dino De Laurentiis production based on Firestarter, a novel by Stephen King. The Brunswick County mansion becomes the exterior for the remote headquarters of The Shop, a sinister clandestine agency trying to capture and experiment on a little girl, played by Drew Barrymore, who can set fires with her mind.

Firestarter is not the first movie to be filmed in North Carolina, or even in the Wilmington area. The state’s history with filmmaking dates back to the 1910s, when silent film “summer studios” briefly flourished in the mountains near Asheville. In the ’20s, theater owner W.S. Scales established a studio in Winston-Salem and produced at least two movies there, including the comedy The Devil’s Match.

In 1921, Mabel Evans, superintendent of Dare County Schools, assembled a coalition of state support and private expertise to produce The Lost Colony, a five-reel silent epic that told the history of the English settlement. The North Carolina Film Board operated for three years in the 1960s, producing historical and educational projects. And in 1973, Earl Owensby founded an independent studio in Shelby.

But it is Gov. James B. Hunt Jr. who creates the most powerful engine of movie development: the North Carolina Film Office. By 1983, the state has hosted 26 feature films, starring such A-list actors as Natalie Wood, Peter Sellers, and Shirley MacLaine. In the next three years, it will become one of the three most active movie-making states in the country.

Firestarter demonstrates the colossal economic impact that a single major production can bring to the community. Bill Arnold, Hunt’s first film commissioner, emphasizes the benefit to local businesses, later telling Jean Nance, author of Cinematic Wilmington, “I remember when the Firestarter people went to the Wilmington Lowe’s store and spent $40,000 in just one purchase order to buy hardware and nails to go out and build a replica of the Orton Plantation house” — a replica that would be burned to the ground in the final reel.

The lavish production attracts an international crew of cinematographers, gaffers, set designers, and special effects artists, many of whom remain in the area to work on other projects — by decade’s end, some 1,000 of them are permanent residents.

Jock Brandis is in Toronto, working on The Dead Zone, when De Laurentiis invites him to Wilmington to do the lighting for Cat’s Eye. His other charge is to assemble able crew from the studio in Shelby, where the textile industry has gone bust. “It was a gold rush,” Brandis says. “Somehow the whole idea was to make magic, and the money flowed, and everybody lined up under the spigot.”

Brandis also has to teach the newbies basic Italian before they’re allowed on set, because the first few crews coming in are from Italy. One day while downtown, he spies a pickup truck full of his crew members and watches as it pulls over to the curb. One of the men climbs out, then leans back into the cab and calls, “Ciao, y’all!” To Brandis, a native of the Netherlands, the moment coalesces the weirdly comic international commingling of Americans, Brits, Canadians, Italians, and all the rest. 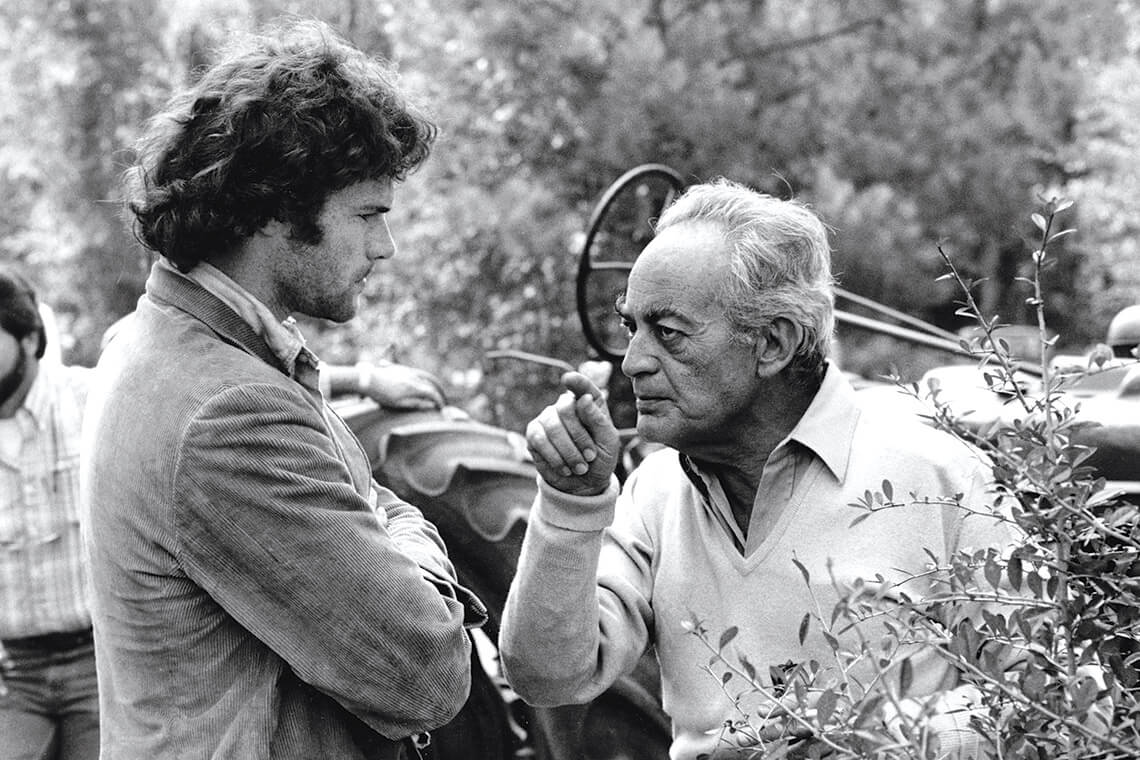 Francine DeCoursey, a self-described filmmaker/activist, comes to Wilmington as a student in broadcast cinema at UNC Greensboro — having already produced one of the first film festivals in the state — and witnesses the influx of talent firsthand. “We had this amazing international film veteran pool of brilliance right here in River City!” she recalls. “So we were able to learn our skills at the heels of masters … You can’t put a price tag to that.”

Many of the new projects are made possible because De Laurentiis, long in the market for his own American studio, decides to build it in Wilmington. In the four years that follow, De Laurentiis Entertainment Group Studios (DEG) mounts more than 20 new projects.

Part of the appeal is financial — the site that DEG acquires near the airport costs a fraction of what similar real estate would go for in New York or Hollywood. The second factor is the variety of locations available. The seacoast and riverfront are picturesque, the downtown historic district is perfect for shooting period pieces, outlying towns provide their own rural ambiance, and the cityscape can be made to stand in for larger cities. 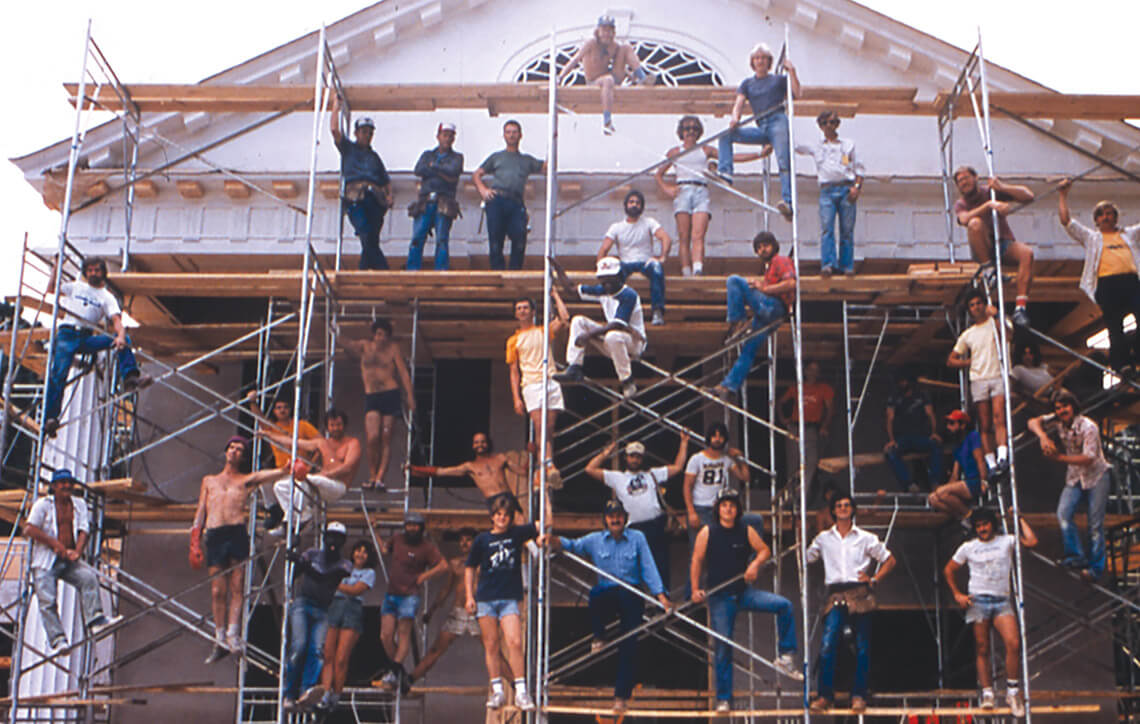 The $3 million construction budget for Firestarter included an elaborate replica of the mansion at Orton Plantation. Photography courtesy of Cape Fear Museum of History and Science, Wilmington, NC

The reliable crew base becomes a key asset, working together closely for 15 to 18 hours a day on stressful shoots. “Difficult conditions, but we all banded together,” remembers DeCoursey, who gets her start in the wardrobe department.

Soon, the craftspeople are joined by vendors: camera, lighting, and special effects companies; casting and catering outfits; transport and other services. It’s clear to everyone involved that something special is happening, that a community is being transformed. “It felt like we were building not just a community but also a family,” DeCoursey says. “There’s a real tight-knit sense of belonging — and a sense of, What in the world have we stumbled into? Look at us!”

DeCoursey accompanies Governor Hunt and Mark Fincannon — who, with his brother Craig, establishes a casting company in Wilmington — to the West Coast to court production companies for what some have already christened “Hollywood East.” 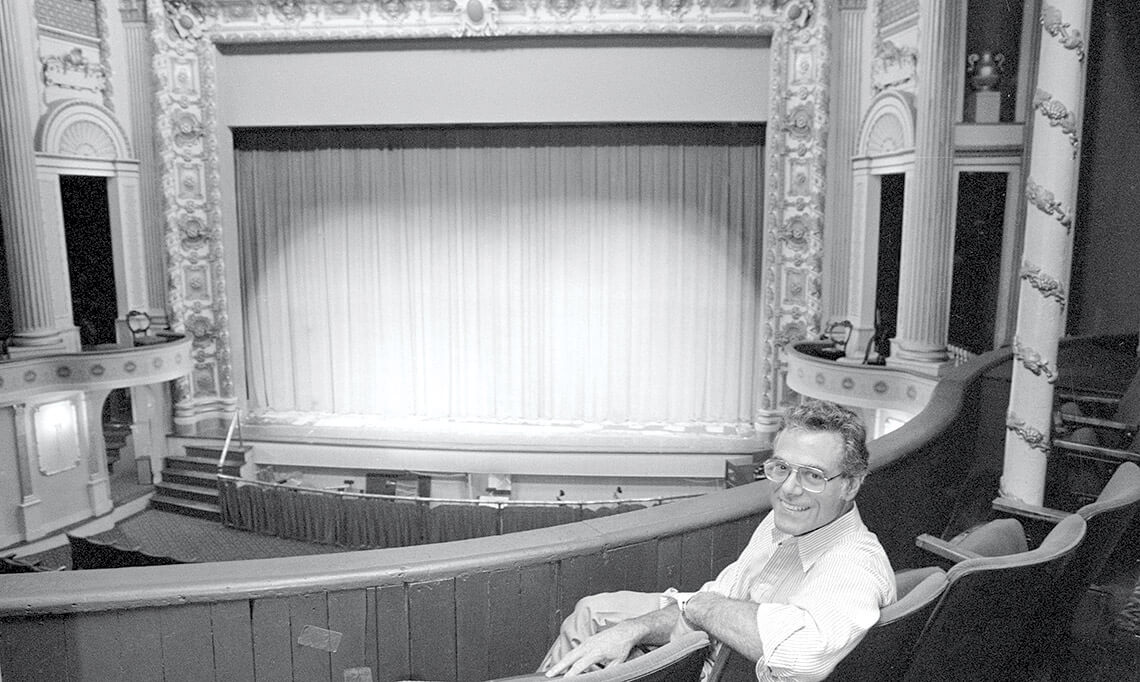 After producing Firestarter, Frank Capra Jr. directed a 1985 production of Arsenic and Old Lace at Thalian Hall. His father had directed the film version, starring Cary Grant, in the 1940s. Photography courtesy of The News & Observer collection, courtesy of the state archives of north carolina

In the 1980s and ’90s, the movie industry pumps about $5 billion into the state’s economy, more than half of it in the Wilmington area. Capra moves on to produce films in Hollywood, and when DEG (now owned by Carolco Pictures) is bought by EUE/Screen Gems, he returns to become its head.

Under Capra’s leadership, the studio forms a partnership with UNC Wilmington to help create a new program in film studies. Classes are held on the studio lot and feature a professor paired with a round-robin of actors, directors, makeup artists, cinematographers, and the like, “cast” by DeCoursey and “directed” by Capra — who is presented with an honorary doctorate of fine arts by the university in May 1999. That month, his name is etched on a star along Wilmington’s Walk of Fame.

Coming in September: Descendants of enslaved men and women reunite at Somerset Place.