Capt. Michael J. Smith and Dr. Ronald Erwin McNair have been selected to be part of what one journalist will later call “the perfect crew” — six highly skilled astronauts and a high school social studies teacher from Concord, New Hampshire, the first “Teacher in Space.” They’ve trained together for months, and on the cold morning of January 28, 1986, they board the space shuttle Challenger at the Kennedy Space Center in Merritt Island, Florida, preparing for an early morning launch.

Smith spent his boyhood on a chicken farm in Beaufort across the road from the Beaufort-Morehead City Airport, an old World War II-era airfield. Entranced by the sight of airplanes taking off and landing, he took flying lessons and soloed by the time he was 16 — before he even passed his driver’s license test. A three-letter man at East Carteret High School, he was voted Most Outstanding Student.

He won an appointment to the United States Naval Academy, where he earned a degree in naval science and subsequently completed a master’s degree in aeronautical engineering at the Naval Postgraduate School in Monterey, California, in 1968. But, a flier at heart, he naturally followed up his academic studies with rigorous training as a naval aviator in Pensacola, Florida. He was then posted to Kingsville, Texas, for advanced jet training command and later flew A-6 Intruders.

In three carrier deployments and stints as a test pilot and flight instructor, Smith logged nearly 5,000 hours of flight time in 28 different aircraft — an astonishing range of flight experience. In 1980, NASA selects him for its astronaut training program; a year later, he is officially qualified to pilot a space shuttle. 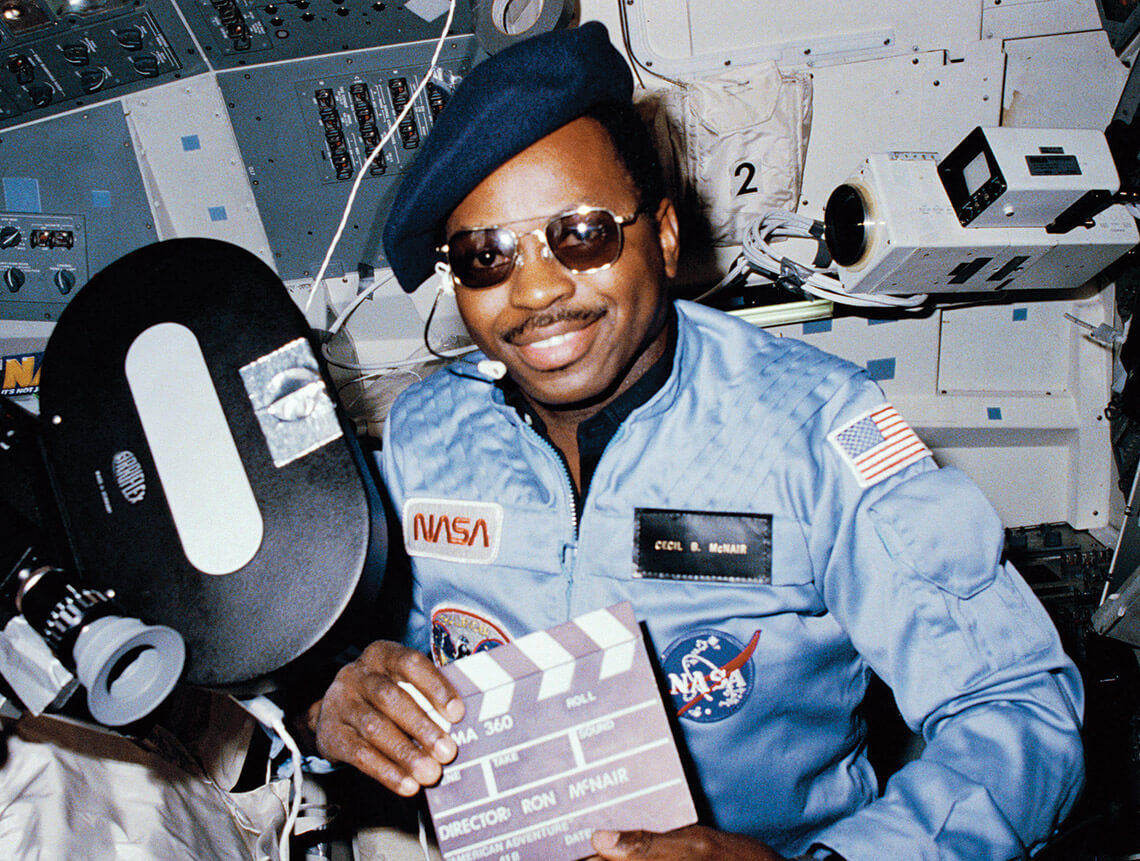 Astronaut Ronald E. McNair was the second Black astronaut in space. photograph by THE NASA LIBRARY/ALAMY

Ronald E. McNair came to North Carolina Agricultural & Technical State University in 1967 from Carver High School in racially segregated Lake City, South Carolina, where he served as class valedictorian. He was determined to earn a doctorate within 10 years of graduation. At A&T, he graduated magna cum laude with a BS in physics, then earned a Ph.D. in laser physics from the Massachusetts Institute of Technology at the age of 26 — fulfilling his high school promise to himself. McNair becomes preeminent in the field of laser physics, earning one prestigious distinction after another: Presidential Scholar (1971-1974), Ford Foundation Fellow (1971-1974), and NATO Fellow (1975), along with three honorary doctorates and a host of other awards.

In 1978, he was selected for NASA’s astronaut training program, and in 1984 he becomes just the second Black astronaut in space, flying as mission specialist aboard Challenger. Among other duties, McNair operates the Cinema 360 motion picture camera and is photographed aboard the shuttle wearing a dark blue beret and grinning behind aviator sunglasses, holding a movie clapboard and wearing a name badge reading “Cecil B. McNair.” Harking back to his jazz band days in college, he is also pictured playing his saxophone on board Challenger. He logs 191 hours in orbit.

Now, Smith and McNair are set to fly together on Challenger — Smith as pilot and McNair, once again, as mission specialist. The shuttle commander is Lt. Col. Francis R. “Dick” Scobee. Other mission specialists are Lt. Col. Ellison S. Onizuka and Dr. Judith A. Resnik. Payload specialists are Gregory B. Jarvis and the teacher, S. Christa McAuliffe — whose students back in New Hampshire will be watching the launch live on television.

The mission is meant to last seven days, during which time the crew is tasked with deploying and retrieving the Spartan satellite to monitor Halley’s Comet, conduct experiments in fluid dynamics, and broadcast McAuliffe’s lessons from space.

This Challenger mission — the 10th for the workhorse craft — is originally scheduled for liftoff on January 22, but delays caused by the previous mission push back the launch until January 23, then January 24. The space shuttle requires an available “Transoceanic Abort Landing” (TAL) site, in case the craft must cut short its mission. On January 24, bad weather closes in on Dakar, Senegal, Challenger’s TAL. NASA controllers move the TAL to Casablanca, Morocco, and plan for a January 25 countdown. But the launch team can’t meet the new date. The weather forecast indicates that the 26th won’t provide a safe launch window. As it turns out, the weather remains fine for launch, but the opportunity has passed. Launch director Gene Thomas says later, “Sunday morning, the weather was perfect. We got a bad report. It happens.”

Thus, on Monday, January 27, the team at Kennedy prepares to launch Challenger. But there’s another glitch: With the crew on board, the closeout team locks the hatch behind them with a special tool but can’t extricate the tool from the lock. They saw away the tool and drill out the hatch bolt, but by then, strong crosswinds have developed. The flight is scrubbed again.

Over the past few weeks, the weather has been predictably mild, with daytime highs in the mid-50s. But overnight, a fast-moving front of Arctic air slaps into the Southeast. Cape Canaveral, like other nearby communities, experiences the coldest morning on record for that date. On the launchpad, water pipes are drained or left open to prevent freezing, and during the nighttime hours, their leakage forms into thick ridges of icicles that can pose a debris hazard during launch, so the early morning liftoff is pushed back to allow time for sunshine to melt the ice. 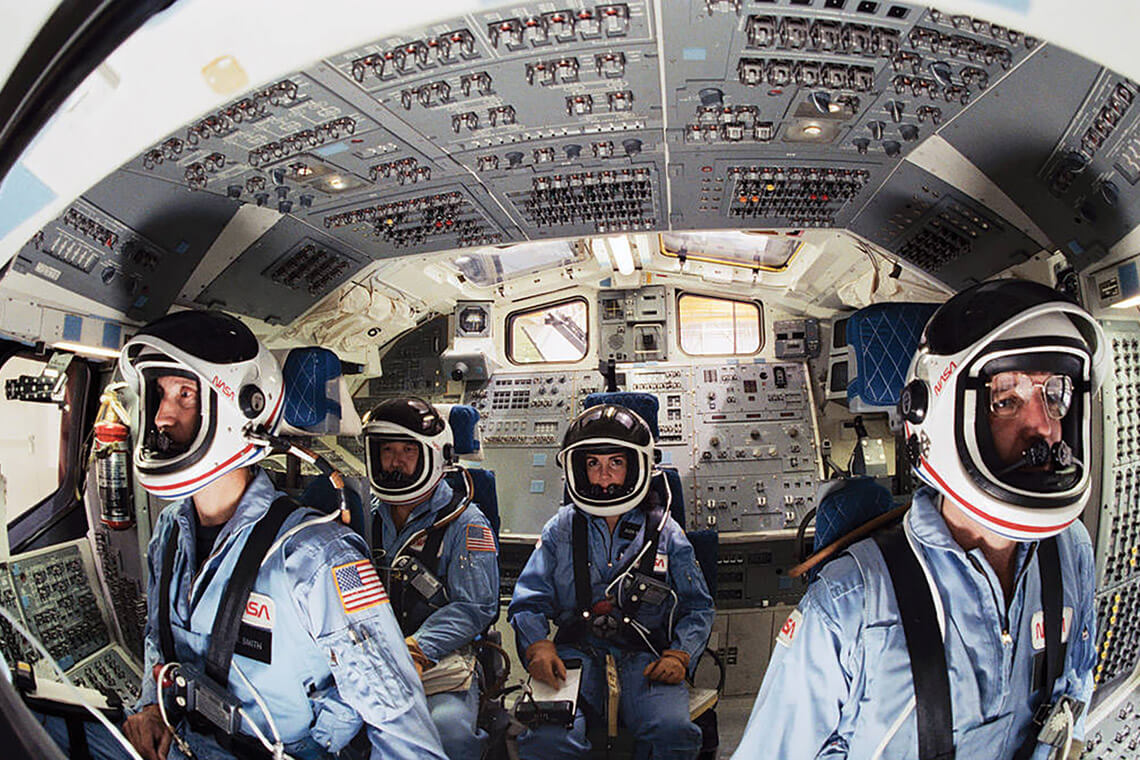 Two members of the crew had ties to North Carolina: Smith (at left, training on the flight deck of the shuttle crew compartment) was a native of Beaufort, and McNair earned a degree at NC A&T in Greensboro. photograph by NASA

At launch time — 11:38 EST — NASA measures the air temperature at ground level as 36 degrees Fahrenheit. But the temperature at a critical solid rocket booster joint on the giant fuselage measures an estimated 28 degrees — well below freezing. And only later will investigators determine that the joints between sections of the rocket are likely as much as 20 degrees cooler on the shaded side of the fuselage than on the sun-warmed face.

The fuel segments of the solid rocket boosters are sealed from leaking hot gases by flexible O-rings — large gaskets meant to contain the ignited fuel.

Shortly after the launch, Daniel Zwerdling and Howard Berkes of National Public Radio meet with engineers at Morton Thiokol, Inc., the Utah-based contractor that fabricated the solid rocket boosters and their O-rings — who insist on anonymity to avoid retaliation — and learn a disturbing story. “The engineers had resisted the launch, had recommended against it, citing the ‘blowby’ in an earlier low-temperature launch and studies of the elasticity of the O-rings,” Berkes reports. “The night before liftoff, these two Thiokol engineers, along with several colleagues, tried to convince NASA to postpone liftoff.”

But there’s a lot riding on this mission. The Teacher in Space initiative, regarded by some at NASA as a publicity stunt, is designed to gin up flagging public support for the agency, whose missions lack the glamor of the moon shots. Even the name “space shuttle” conjures an image of a long, uneventful commute rather than an adventure in the cosmos. NASA has never lost an astronaut on a space mission. And President Ronald Reagan, whose State of the Union Address is scheduled for the evening of the eventual launch day, plans to celebrate Challenger’s achievement.

The managers at Thiokol eventually overrule the engineers and give the go-ahead for launch. Meanwhile, unbeknownst to the seven members of the “perfect crew” aboard Challenger, during the countdown, one of the engineers silently prays that the seals will hold. Challenger launches into a translucent blue sky that hides “clear-air turbulence” — two shearing “jet streaks” buffeting the craft from different directions, increasing whatever strain was already caused by the extreme temperature.

At about 1 minute and 4 seconds into the flight, a plume of fiery gases streams from the right booster. Nine seconds later, at 46,000 feet, the shuttle vehicle breaks up in a brilliant flash, shooting the crew cabin to its apogee of 65,000 feet and then into the sea at more than 200 miles per hour — a descent that lasts 2 minutes and 45 seconds. When the cabin wreckage is recovered, investigators salvage three air packs that were activated after the catastrophic breakup — including Smith’s — indicating that at least some of the crew may have survived until crashing into the sea.

The last recorded words from the flight deck are Smith’s: “Uh-oh 3/8.”

Reagan appoints a Presidential Commission headed by William Rogers, a former secretary of state. His opening statement does not reassure commission member Richard Feynman, a Nobel laureate in physics. “We are not going to conduct this investigation in a manner which would be unfairly critical of NASA,” Rogers admonishes the group, which includes astronaut Sally Ride, who once flew on Challenger.

Ride, not so compliant, shares temperature data on the O-rings with Air Force Gen. Donald Kutnya, who briefs Feynman. During a televised hearing, Feynman extracts the O-ring from a scale model of Challenger. He dunks it into a glass of ice water and then crimps it. “And I discovered that when you put some pressure on it for a while and then undo it, it maintains — it doesn’t stretch back.” The O-ring fails.

Thus, on that bright, fatal morning, Smith, McNair, and their fellow members of the perfect crew aboard Challenger launch into eternity.

Coming in August: Wilmington builds a reputation as “Hollywood East.”