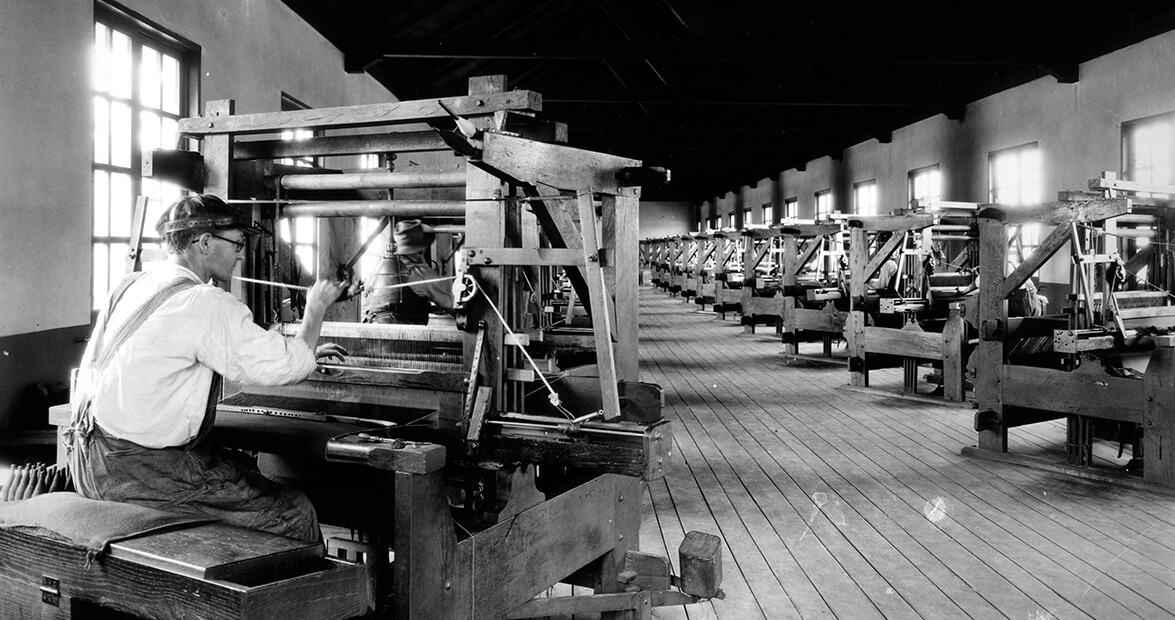 In early 2015, Dianne Kepley, of Echoview Fiber Mill in Weaverville, decided she wanted to bring the textile story of Biltmore Industries to the public attention once again.

The business started as a craft school in Asheville’s All Souls Church by Eleanor Park and Charlotte Louise Yale, two social workers from New York. When George and Edith Vanderbilt, of the Biltmore Estate, learned about these women’s efforts in 1901, they lent their support. The Vanderbilts eventually subsidized the development of a craft education program that would become Biltmore Estate Industries with eight looms in operation in Asheville’s Biltmore Village. 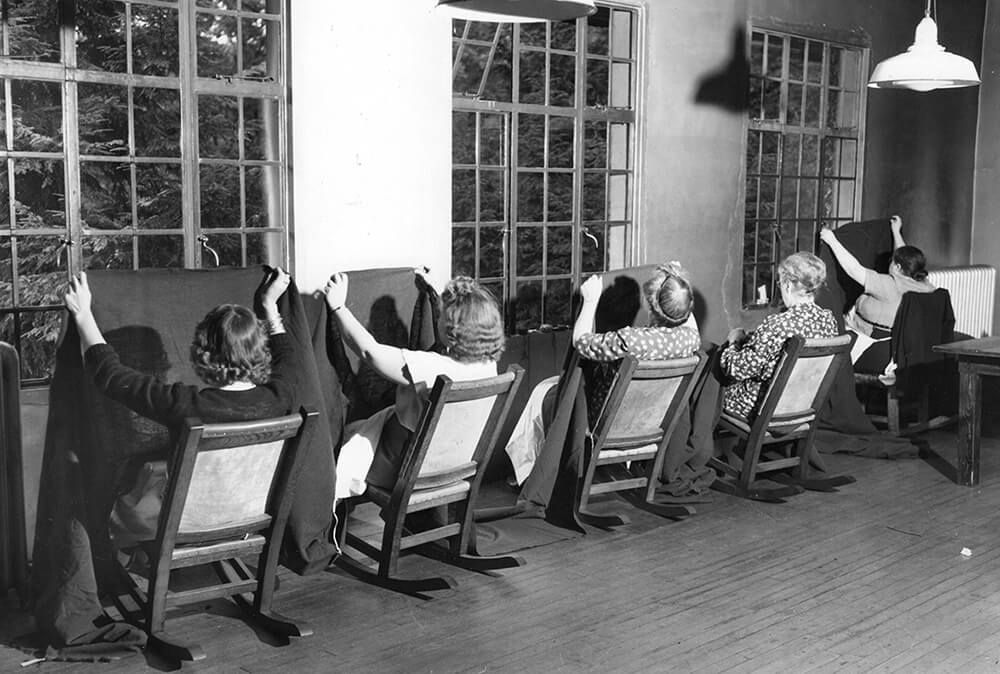 Biltmore Industries’ female employees would inspect the cloth and repair any imperfections with needle and thread. photograph by Grovewood Village

When George died in 1914, Edith sold the business to Fred Seely, architect and manager of The Grove Park Inn. Biltmore Estate Industries became Biltmore Industries, known locally as the Homespun Shops. Seely moved the operation to a site adjacent to the Grove Park Inn. The business flourished into the early 1950s. In its early days, the shops produced a deep red fabric that was purchased by President Calvin Coolidge’s wife Grace, earning the name “Coolidge Red.”

In recognition of the success of Biltmore Industries, Kepley was determined to create a dye inspired by the color Grace Coolidge loved so much and collaborated with The North Carolina Homespun Museum, located in one of the buildings that formerly housed Biltmore Industries.

“Between 1917 and 1923, all six buildings were built to accommodate those workers,” says Tom Anders, historian and manager of the museum. “About a hundred people were working there at any given time.” 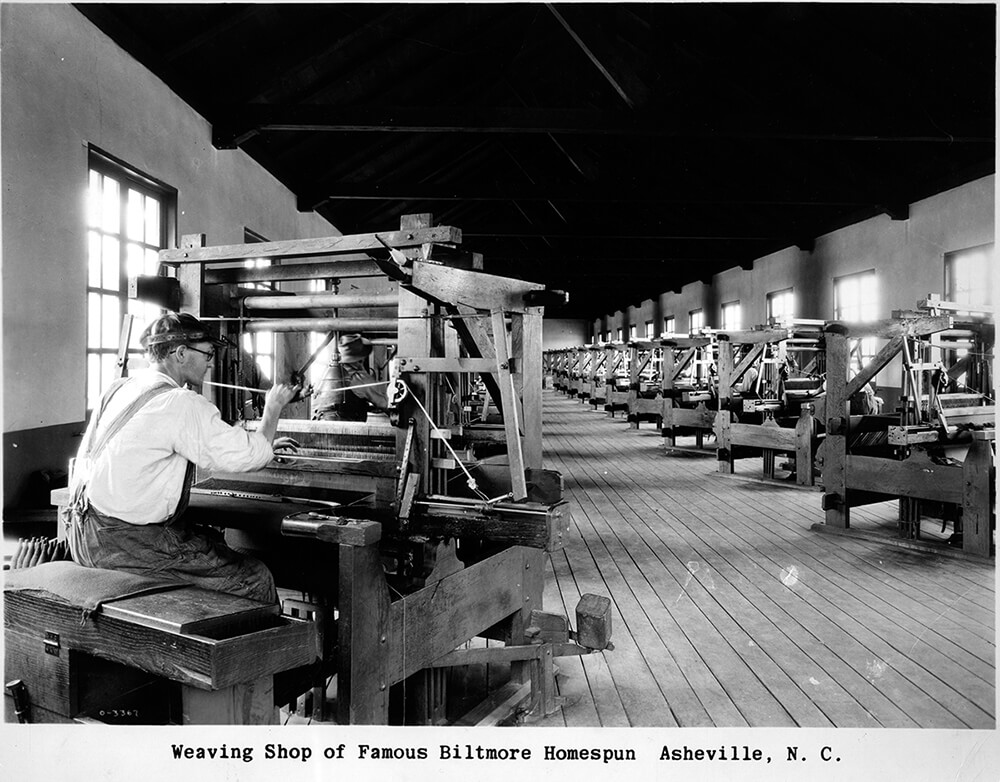 While the original dye formula was nowhere to be found, Kepley spent hours poring over the museum’s archives. Enlisting the help of natural dye expert Donna Brown, they finally succeeded in creating a similarly colored yarn at Echoview Fiber Mill, where Kepley works as the business development and communications manager. In June 2015, the new color inspired by “Coolidge Red” was reintroduced as part of a five-yarn collection by the mill.

The production of fabric not only connects us to the past, but it also binds craftspeople in the present. The history of textiles in western North Carolina is a storied one. But in the 1980s and 1990s, the industry unraveled as many workers lost their jobs as textile manufacturing largely moved overseas. Now several businesses hope to bring new energy to the fiber that has made the region a colorful tapestry of artistry.

Formed in 2012, Local Cloth is a nonprofit organization committed to growing the fiber supply chain within a hundred miles of its Asheville headquarters. It began as a loosely gathered interest group before becoming an organization of about 130 active members today. 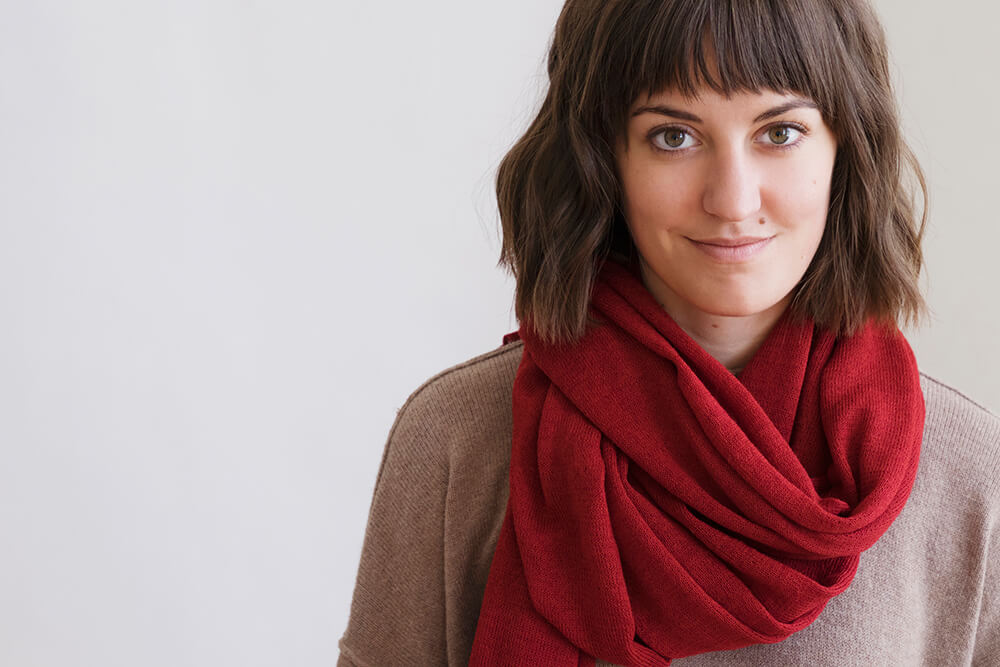 “The idea of making cloth that becomes useful spans so many different techniques and ideas,” says Karen Donde, a weaver and founding member of Local Cloth. “That’s where we pull in so many different people — whether you’re weaving it, knitting it, crocheting it, felting it, dyeing it, pleating it, stitching it, whatever — it’s the cloth that brings us together.”

Hence Local Cloth’s name. The organization makes cloth that has many uses or can be displayed as a piece of artwork.

Education is at the core of Local Cloth, which hosts an annual fashion show. Project Handmade is focused on using local resources and artistry. Members Vicki Bennett and Martha Owen both won awards in 2016 for Best Use of Local Materials or Resources.

Bennett, who works primarily in felt, shares, “We’ve talked about how there is real human cost to [exporting our textile industry overseas] and that’s one of the underlying things that’s important to people in Local Cloth. That is, do we really need to have that as our fashion model?”

Spanning from northern Georgia to southern Virginia, Greensboro to eastern Tennessee, The Carolina Textile District is a for-profit corporation that co-director Sara Chester describes as a matchmaking service for manufacturing. “We work with the folks who want to make a product and work with the manufacturers that can make it for them,” Chester says.

“We organize demand,” she adds. “We organize the production of goods.” For example, The Carolina Textile District will help a burgeoning homespun business meet its increasing production needs by connecting the client with a cut-and-sew shop or a print-and-dye company. 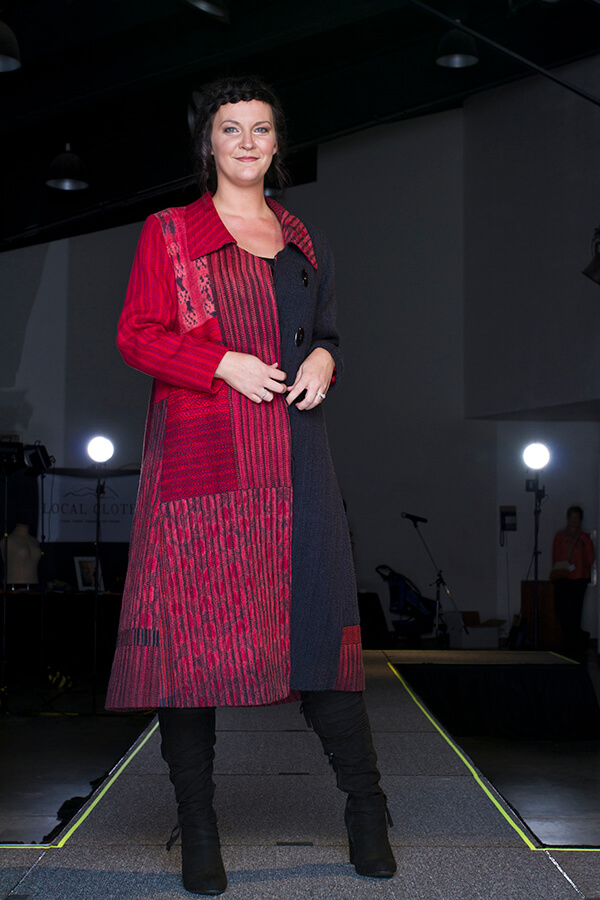 For Project Handmade 2016, this entry was the “Red-‘n-Black Fit-‘n-Flare Coat.” It features handwoven fabrics (cotton/rayon) by Liz Spear, of Waynesville, and hand-dyed silk by Neal Howard, of Cullowhee. Designed and sewn by Spear. photograph by Max Ganly for Local Cloth, Inc.

Don’t let the idea of the mechanized aspect of textile work fool you. There’s a good deal of creativity in these factories. The District uses the term “crafted production.” When you imagine someone sitting at a sewing machine, they aren’t just pushing fabric through the needle. “It requires a lot of artistry and a lot of creativity at that worker level to produce textiles today,” Chester says.

When it comes to fiber arts and textile production, artisans and entrepreneurs in western North Carolina are combining forces and pooling their talents. It’s a way of life that’s survived the test of time. Here, the past and the present are all woven together.