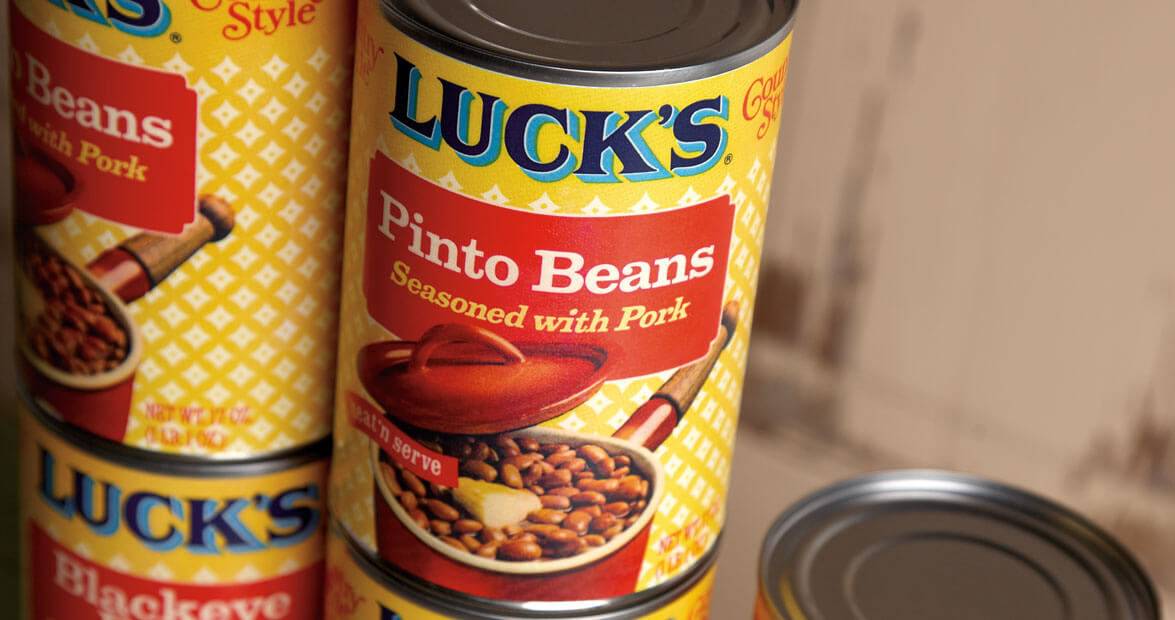 “Nobody can can a pinto bean fit to eat.”

One of the regulars killing time in Ernest Spivey’s store, playing checkers and seeing who could tell the biggest lies, said so. In 1950, that was accepted as the truth by nearly everyone in Randolph County.

Everyone save Alfred Spencer, that is.

That’s because everyone knew their grandmama — or their mama, or their wife, who learned it from her mama or her grandmama — cooked pinto beans the way they oughta be cooked.

At home. On the kitchen stove.

And Alfred Spencer knew that. But he liked a challenge.

So he high-tailed it to a wholesale grocery, bought a bag of dried pintos, soaked them, cooked them, canned them, and, lo and behold, Mountain View Canning Company had a new product.

In 1947, Spencer had partnered with Ivey Luck, a local entrepreneur, to build a two-story cinderblock cannery on a high point south of Seagrove that local folks called Seagrove Mountain, even though there aren’t any mountains within sight. The company name paid homage to that nickname: This was a cannery with a view.

In the beginning, the labor force was composed of Spencer’s mother and father. He and his siblings — some older, some younger — joined in, too. His son, Bill, started in the early 1950s.

“It was sort of like out on the farm,” Bill says. “When you got big enough to work, you went to work.”

The company’s first foray into canning products to distribute was with Mountain View Beef and Mountain View Sausage. No one beat a path to the cannery’s door to scoop up those items, but they were best sellers compared to Mountain View’s peanut soup, a concoction made of peanut butter, milk, flour, and macaroni noodles.

The buying public did not bite.

Enter the pintos, which were packed in cans with bright yellow labels and a new brand name, Luck’s, in blue letters (just like today). The recipe was simple, and it still is: pinto beans, water, pork fatback, and salt. The brand name (and later the company name) was changed to Luck’s because it rolled off the tongue more easily than Spencer’s Beans.

At first, pinto beans didn’t exactly fly off the shelves, either. And then along came Tommy Floyd and the Blue Ridge Buddies. In the early 1950s, Floyd, a Stokes County native, hosted a live country music broadcast on Saturday mornings from Asheboro’s WGWR radio station. Locally, he was a star.

“You tell Tommy Floyd’s boy I want him to come down to the cannery. I want to talk to him,” the elder Spencer told Bill one school day. Floyd’s son, Buster, was one of Bill’s fourth-grade classmates.

Bill relayed the message. Soon, Floyd and his band were plugging Luck’s Country-Style Beans on television — that newfangled medium — via country music spots syndicated on stations throughout the Southeast:

“Tommy Floyd had a lot to do with Luck’s Beans becoming a household name,” Bill says.

The beans served a changing world.

“The economy was in need of heat-and-serve things,” says Lucy Rice, who started at Luck’s in 1954 and stayed for 41½ years. “Women were starting to work. They could open a can and have a nutritious meal when they got home.”

The growing company added more employees — as many as 250 in peak season — and more automated equipment. But in the early days, the numbers were slim and the technology simple. “When we say a hands-on operation, everything was done by hand,” Bill says. 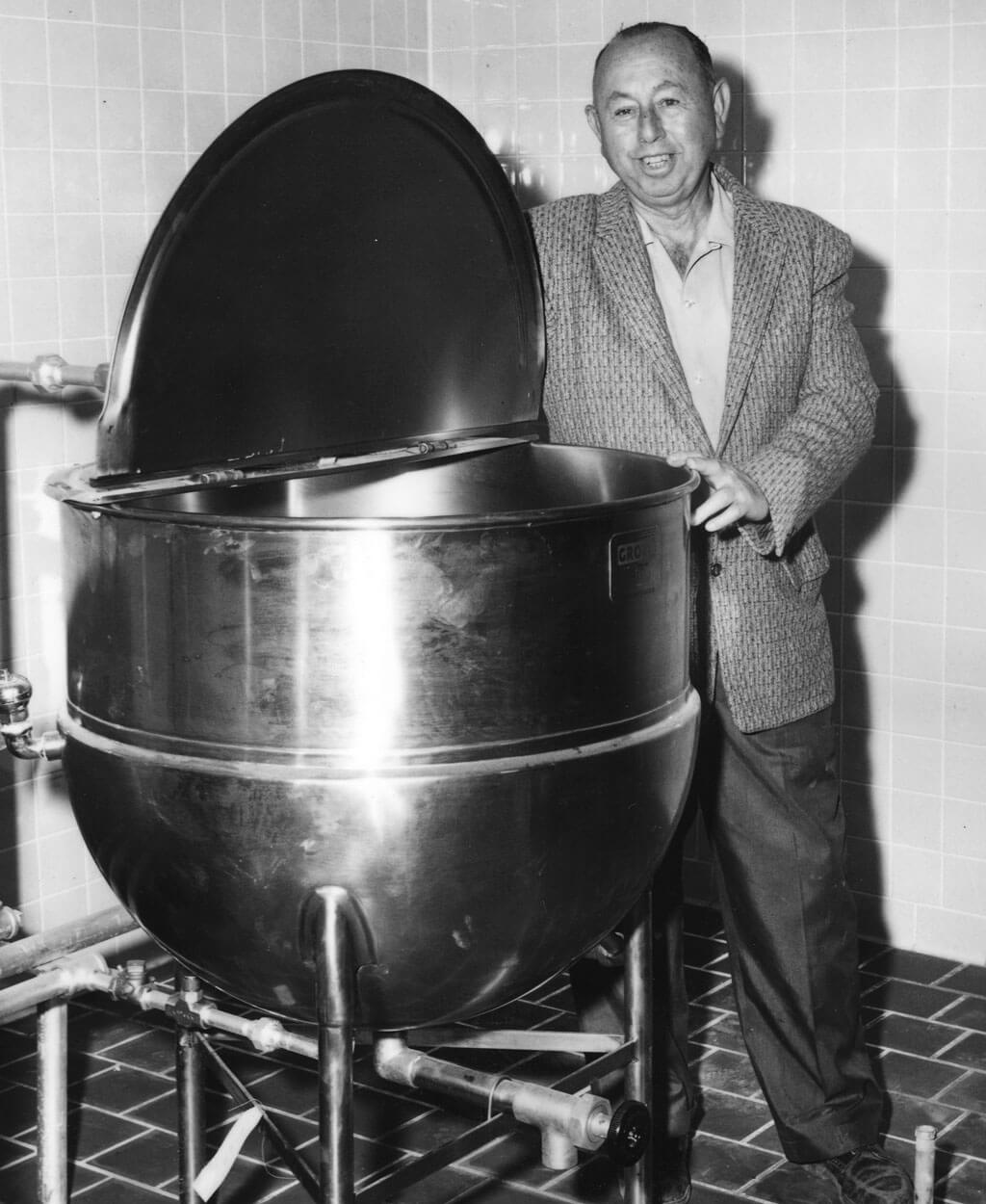 Ivey Luck with a bean cooker in 1960. photograph by Lucy Rice

Relatives of the owners picked small rocks out of the beans. Pork fat — a cube per can — was sliced by hand. It was the women’s job to tip a tablespoon of salt into each can, then put the lid on.

Everyone, it seems, wanted Luck’s beans. Vance Williams drove a company truck for 42 years. Once a month, every driver received a case of beans to dole out as they deemed necessary: to the men who monitored the vehicle weigh stations, to state troopers, and to others.

Most orders were destined for store shelves within about a 500-mile radius. In the early days, the cans were sometimes still warm when they got to the stores.

When Rice started work, the company’s product list was short: Pinto Beans, Great Northern Beans, Giant Lima Beans, and Black-Eyed Peas. Before long, Luck’s opened another cannery in the Moore County town of Aberdeen, and for a few years canned peaches and apples in season. In all, Luck’s introduced more than 40 products through the years, including Salad Greens (seasoned with pork); Turnip Greens with diced turnips (seasoned with pork); Chicken and Dumplings; Fried Chicken with gravy; Potatoes and Beef in gravy; and Luck’s Bar-B-Q.

Business was quite good, but Alfred Spencer had always been interested in hunting and fishing, and saw an opportunity to follow his dream. He owned a cottage at Sunset Beach, and had built a small motel on adjacent land. In 1957, Spencer sold his shares to his three partners. A decade later, Luck’s merged with American Home Products, and those three partners became some of the richest men in Randolph County. Scholarships and grants in their names survive today.

The cannery does not. It closed in 2002, two years after ConAgra bought the Luck’s brand. The new owners moved canning  operations to Tennessee. Rice says she could taste a difference. “When they were packed at Seagrove, they used well water,” Rice says. “When the line was moved to Tennessee, they used city water — and that changed it.”

The Arizona Canning Company purchased the Luck’s brand in 2011. Today, the beans are canned in Tucson. But its legacy lives on. “Luck’s was a valuable place for a lot of people in southern Randolph County for 50 years,” Rice says, “and it fed a multitude of people.”