The ocean churns as small craft advisory warnings shade the coastline with a slender band of lavender. The sea change and the wind shift are palpable, especially when a clammy fog settles over NC Highway 12 en route to Roanoke Island and downtown Manteo, where one might never know a gale is blowing. For in the heart of this walk-around kind of waterfront town, life strolls on no matter the weather.

An easterly turn off U.S. Highway 64 heads toward the banks of Shallowbag Bay. Traveling north, Fernando Street provides a quaint gateway, winding around late 19th-century Queen Anne-style homes and early 20th-century bungalows, setting the mood. Glide past a historic boatyard and onto Queen Elizabeth Avenue — beyond the bustling waterfront marketplace peppered with gourmet cafés and art boutiques, and beneath a leafy canopy — and it comes into view: Croatan Cottage, the historic Clyde and Carolla Hassell House — a welcoming haven at journey’s end. 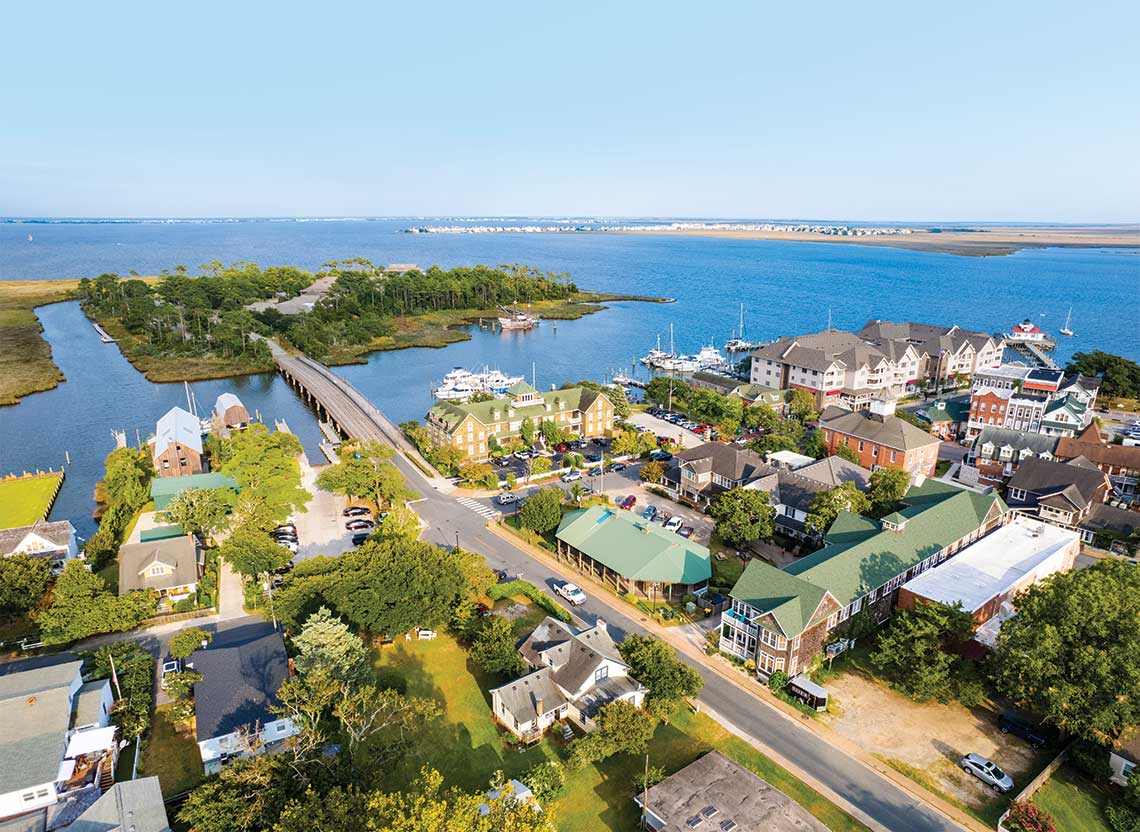 In Clyde and Carolla Hassell’s day, ice cutting and storage was essential to the local fishermen’s trade; now, that industry is commemorated on “Ice Plant Island,” over the bridge from downtown Manteo. photograph by Chris Hannant 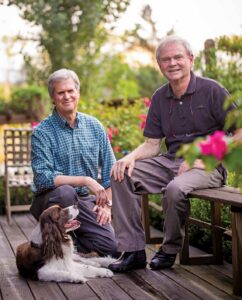 Bill Parker & John Wilson are the third owners of their historic cottage. photograph by Chris Hannant

“As kids, we always called it ‘the pumpkin house,’ ” says John Wilson, a Manteo- and Chapel Hill-based architect who was reared on this island and played on these tree-lined streets as a boy. Now, he and Bill Parker, both pioneers of preservation, own the rental cottage on Croatan Avenue. “That is one wonderful house,” Wilson says. “We both fell in love with that house.”

Clyde and Carolla Hassell had no children, so the house’s story is told by Wilson, who explains that the Hassells ordered their home from the Sears, Roebuck and Co.’s Modern Homes catalog. Clyde Hassell, a small-craft boatbuilder, raised the house on-site with his helpers. Dare County records state that the home was built in 1929, but Wilson thinks it was earlier. As for evidence of its Prohibition-era origins? Apparently, Hassell made at least one modification to the kit plans, which Wilson and Parker discovered in the stairwell: a hiding place large enough to stow a jug of the local moonshine, known as East Lake Dew.

The Hassells lived in the home into the early 1970s. At midlife, like many other Roanoke Islanders during the 1940s, the couple likely rented rooms to summer visitors. A second owner contracted kitchen and bath upfits before Wilson and Parker became the third owners in 2011.

To say that the Hassells started a bungalow movement might be an overstatement, yet several more significant examples are sprinkled throughout the town. Wilson believes that the bungalow at 505 Croatan Avenue is the only kit home in Manteo, though at least one other historic property, the Theodore S. Meekins House, was inspired by Sears’s home catalog cover. (Wilson would know — his great-grandfather built the house in question.)

It seems that Sears sold 70,000 kit homes between 1908 and 1940 — though paper records to substantiate this claim were not kept by the corporation’s stewards. The Vallonia, the model chosen by Clyde and Carolla Hassell, was offered in the catalog from 1921 through 1940 and retailed for $1,979 around the time of the Hassells’ purchase.

Of the three grades of precut houses sold by Sears, The Vallonia was among the finest — part of the company’s “Honor Bilt” line. The lumber was thicker; after it was cut and planed in Illinois, it was transported by rail to Norfolk and sent to Elizabeth City. From there, it was shipped by boat down the Pasquotank River to Albemarle Sound and into Roanoke Sound, then Shallowbag Bay and Doughs Creek, where it was assembled.

If you’re fortunate enough to sleep here, you’ll be welcomed by the subtle touches of manager Dee Evans. For each Airbnb or Vrbo guest, she adjusts the amber glow of Arts and Crafts sconces. The heavy timbered door swings open easily at the touch of the latch. Into the parlor, where Wilson and Parker appointed the interior with period and reproduction set pieces inspired by the California Arts and Crafts movement, while honoring the original Sears, Roebuck and Co. 1930-ish color palette. The decor is decidedly masculine — a reflection of the Hassells? Not so much, yet very eclectic and true to the form.

Dark chocolate-colored ceiling molds and picture rails frame original chandeliers and wall sconces. Deep-silled windows are outlined in glossy white, as are a pair of bentwood barreled arches leading to lower- and upper-level bedroom chambers. The stark contrast is heightened by stained baseboards and authentic two-panel wood doors with crystal knobs, plus celadon green, creamy ochre, and khaki gray three-quarter-inch beadboard walls, book-matched to the kit’s original tints, discovered on the property. “Every can of paint was in the old man’s boathouse,” Wilson says. 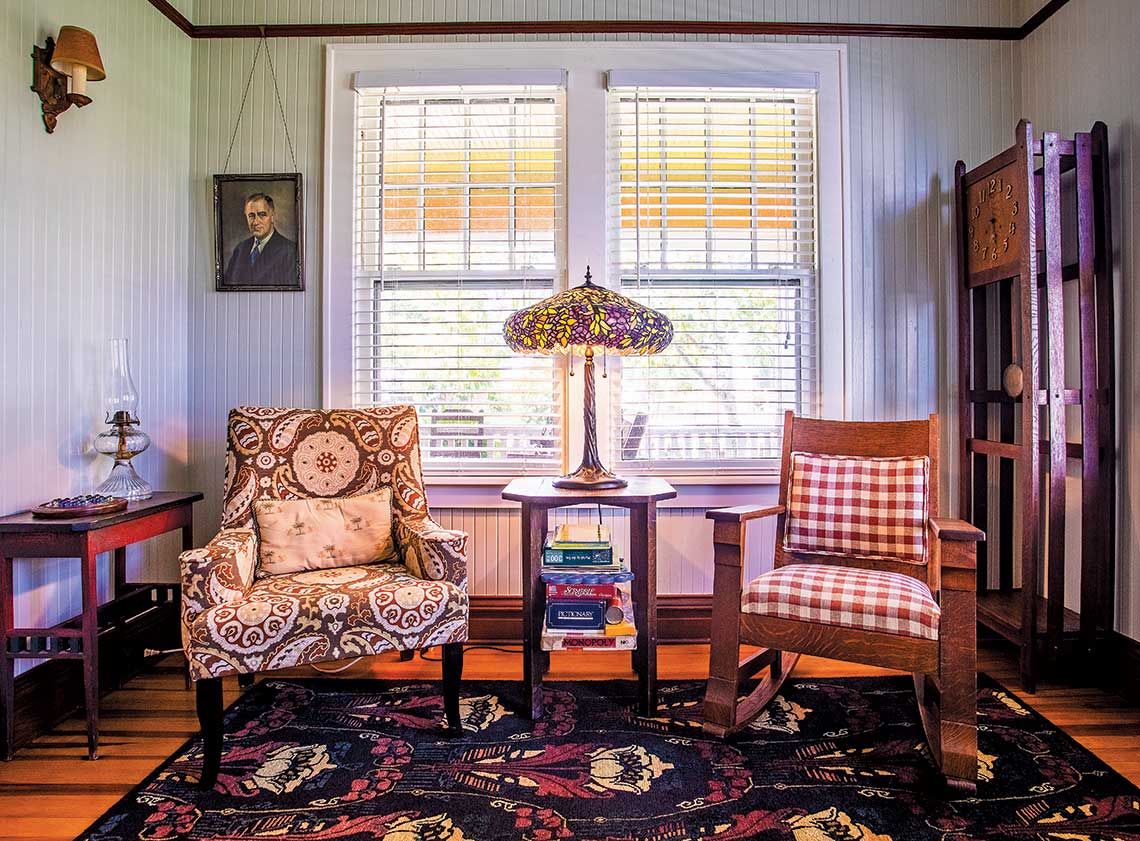 Disciples of the Arts and Crafts movement believed in keeping artificial light to a minimum. But that didn’t mean that lamps couldn’t also be beautiful. photograph by Chris Hannant

Croatan Cottage’s front porch offers an enticing rock back in time. Above, a steep single-gabled roofline belies the second story save for a clue: the gabled dormer that tells all. The engaged porch is held in place with stocky brick-and-mortar pilings and cut Craftsman columns. Exposed rafters are yet another recurring Craftsman-style tradition; so is the rustic, unwashed fencing that harkens back to a time when livestock had to be kept out of front gardens.

Picture Manteo a hundred years ago — a once-thriving harbor anchored by boatbuilding, ice cutting and storing, and fish packing. A public wharf welcomed fishermen and farmers into port to trade.

Between 1900 and 1910, Manteo’s population spiked from 312 to 1,000, most likely due to the storm of 1899 and other devastating hurricanes that hit the barrier island villages to the south. In their wake, a migration of sorts began. The first Outer Banks villagers’ houses arrived by barge, filling available lots between Victorian-era and coastal farmhouse- style dwellings. 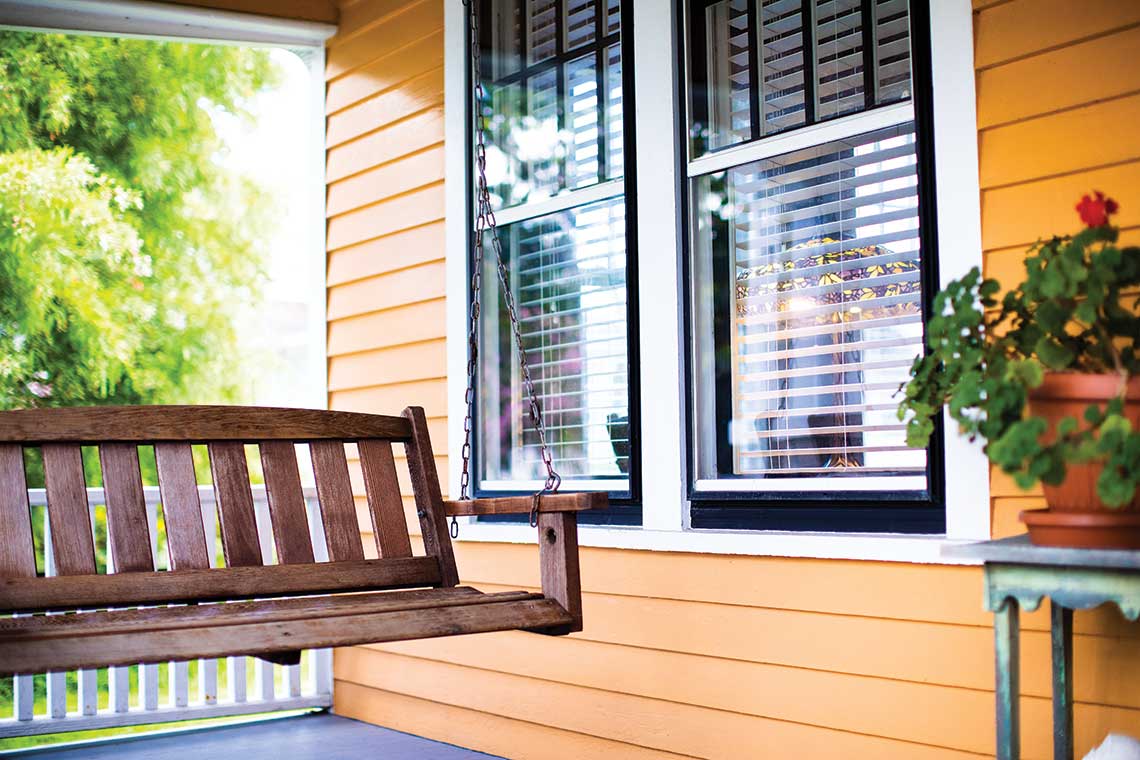 Sears catalog copy extolled the timeless virtues of The Vallonia model’s porch: “Here under the shade of its roof … you may enjoy leisure hours during summer on a swing or easy chair. Children quickly adopt this porch for play or study.” photograph by Chris Hannant

Likewise, into this white-picket neighborhood of year-round islanders — where front porches line the sidewalks, and painted white scrollwork, turned and chamfered posts, and decorative brackets were the island standard — the pumpkin house arrived.

In the fall, follow the scent of Russian olive, cloyingly sweet; in the spring, the heady notes of star jasmine and drooping wisteria beckon. A spritz of citrus from summer’s mimosa, where the mockingbird makes its nest, is the harbinger of summer. Songbird melodies and weather forecasts aside, a trip to Croatan Cottage awaits, with or without vintage clothes to match.

Architectural preservation consultant Daniel Pezzoni completed a reconnaissance survey of Manteo’s historic structures and published his findings in a 1995 report. Included is the Clyde and Carolla Hassell House and a handful of others, some of which may be found on a leisurely walk down John Borden Street. Of particular interest to Pezzoni were several 1930s bungalows: 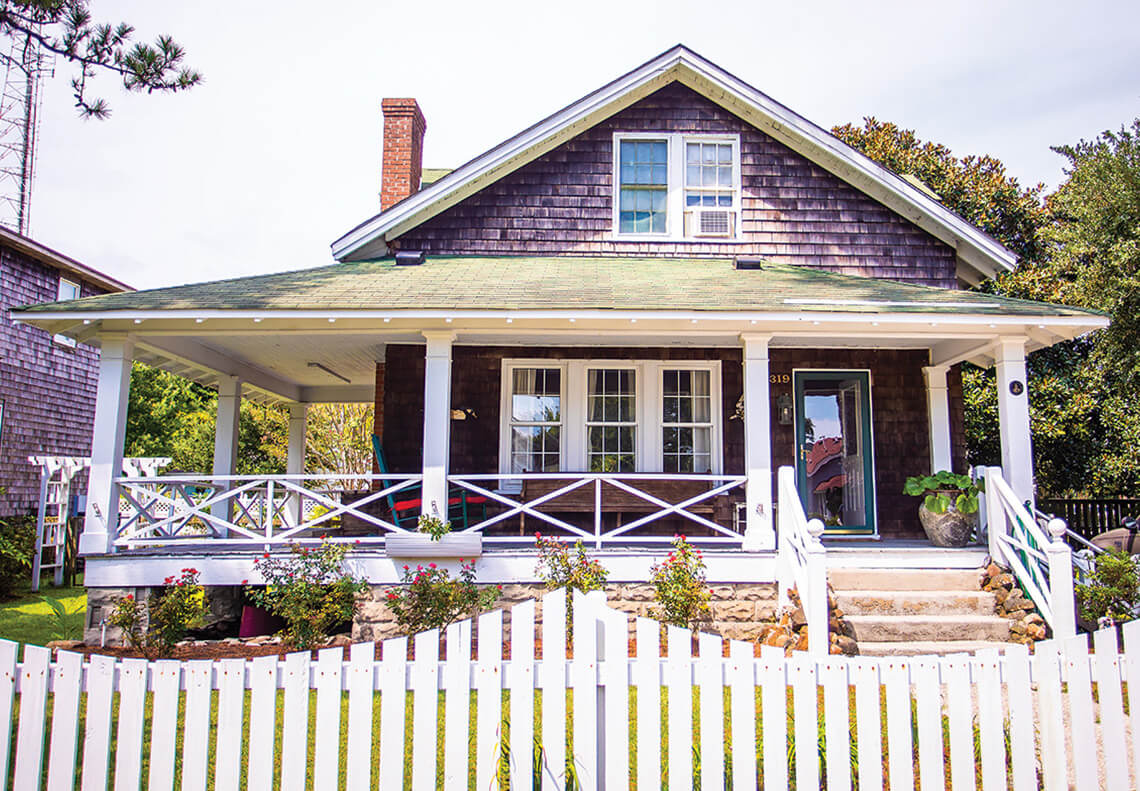 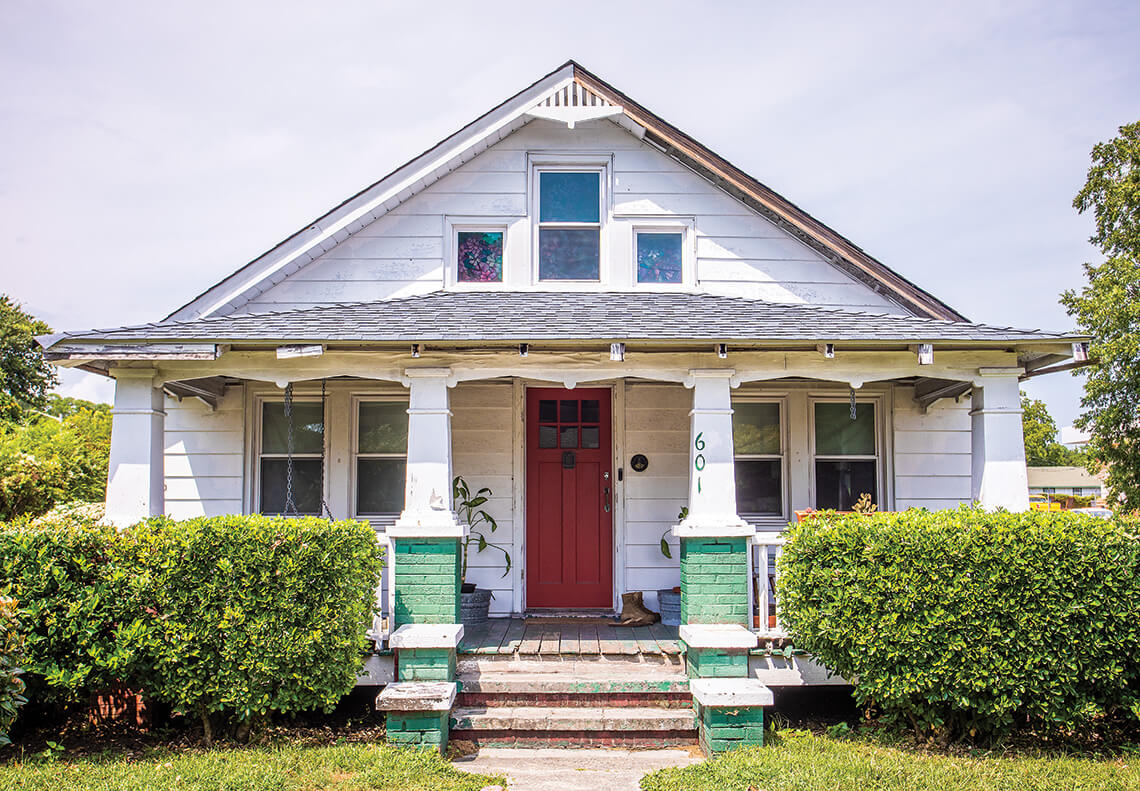 Maloyd and Elizabeth Scarborough House, 601 Sir Walter Raleigh Street. A one-story home built by and for the owner. photograph by Chris Hannant 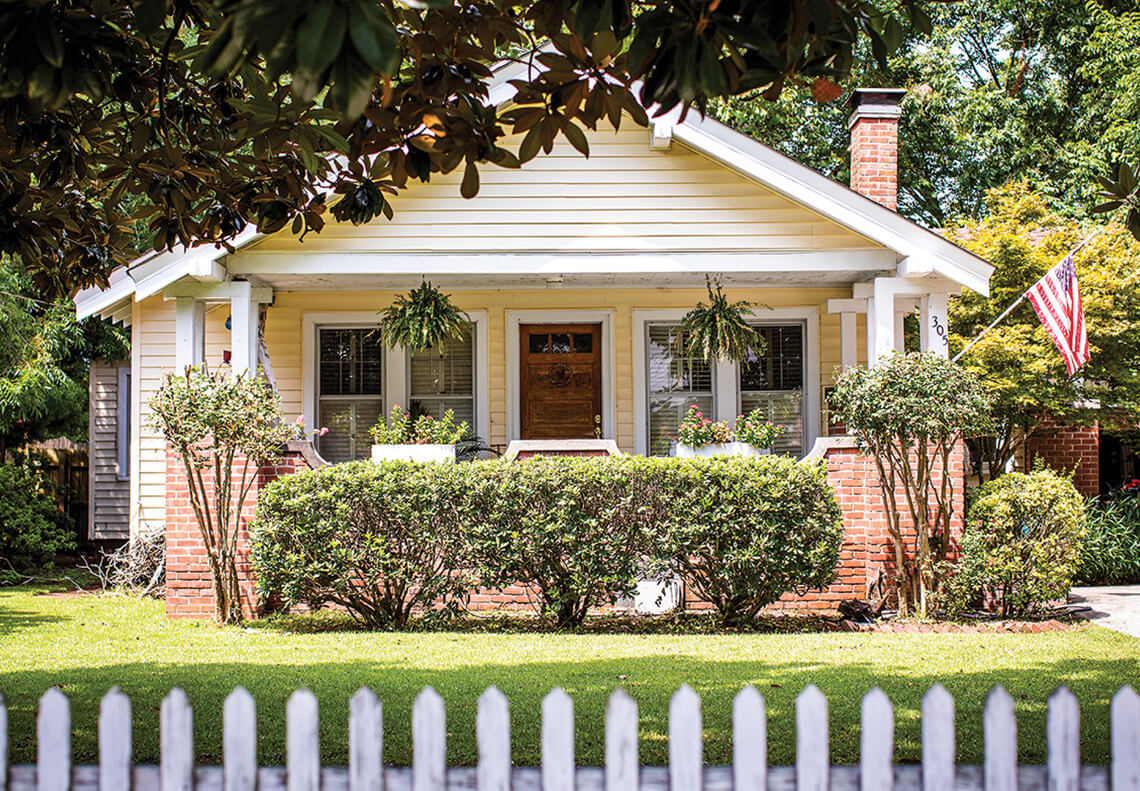