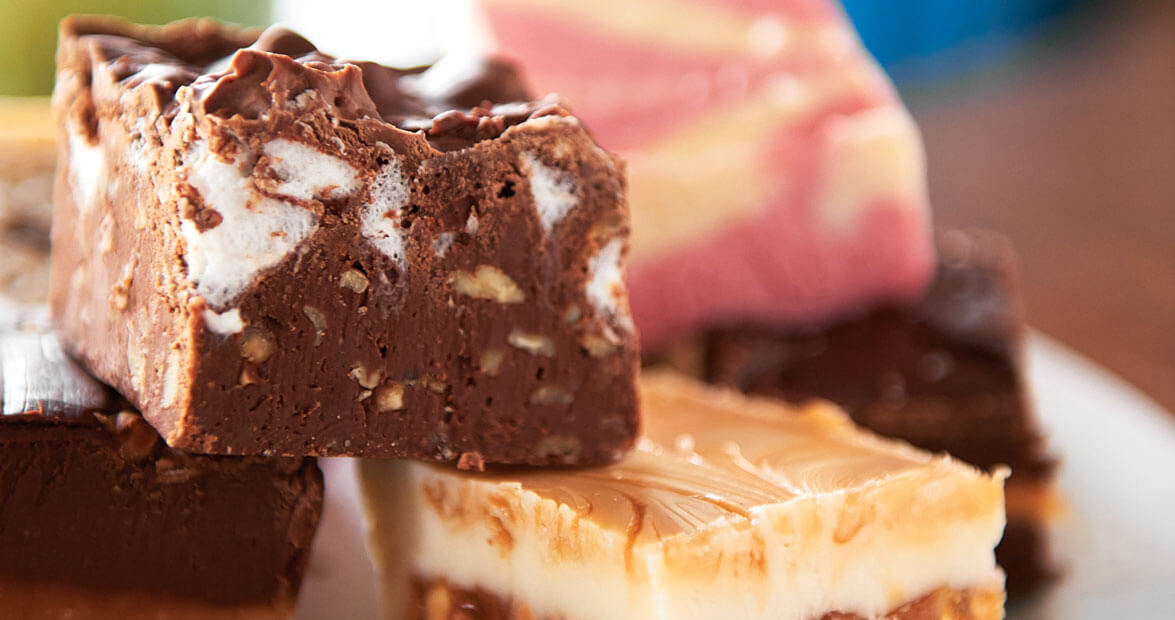 “Candy makes people remember when they were kids,” says Kenny Searles. “It’s like a song. Like something you haven’t thought of in forever, and then it comes on the radio, and you’re right back there again.”

I’ve met Searles, accidentally, in the back of The Candy Factory in Lexington, a renovated 100-year-old hardware store dedicated to just about any kind of candy you might care to imagine. Searles — a clerk, a guardian angel, something — wants to know if I need help. I wouldn’t say it’s claustrophobic inside the shop, but you’d be hard-pressed to find another nook or cranny in which to stack another peppermint puff or Red Hot. It’s curated, is what it is. Deeply, utterly curated.

Searles is a long-tenured employee. “I came in here 12 years ago just to get a bag of double-dipped peanuts, and I never left,” he says. We’re standing in front of tiers of tubs filled with saltwater taffies, and my kids are stuffing those into paper bags, plus hard candies and chocolates. The process is looking a lot like what you’d think it might if you cut loose two half-feral boys under the age of 6 inside an actual candy store. It’s pandemonium. I start to apologize to Searles, but he carries with him the calm air of somebody who’s done this before. Twelve years of before, even. “We’ll put it all back,” he says, laughing. “Some of it, anyway.”

In a tub down to the left, near the floor: watermelon taffy. Green edge, pink center, black “seeds.” The circles, wrapped in waxed paper, are dyed to look like watermelon slices. My grandmother used to put them in my stocking at Christmas every year. I ask Searles: Do you guys, by any chance, have those old rock candies on a wooden stick? My grandmother put those in, too. He gives me a look like he’d been hoping I would test him. He walks me back up to the front, past Pez dispensers and peanut brittle and cinnamon drops, to a glass jar I’d missed in the initial melee. “What flavor would you like?” he asks me. And I’m 8 years old again, or maybe 6, the age of my oldest boy, and I say: green. Green was always my favorite flavor. Searles, a man much taller than I am, reaches into the jar, and he hands me green. 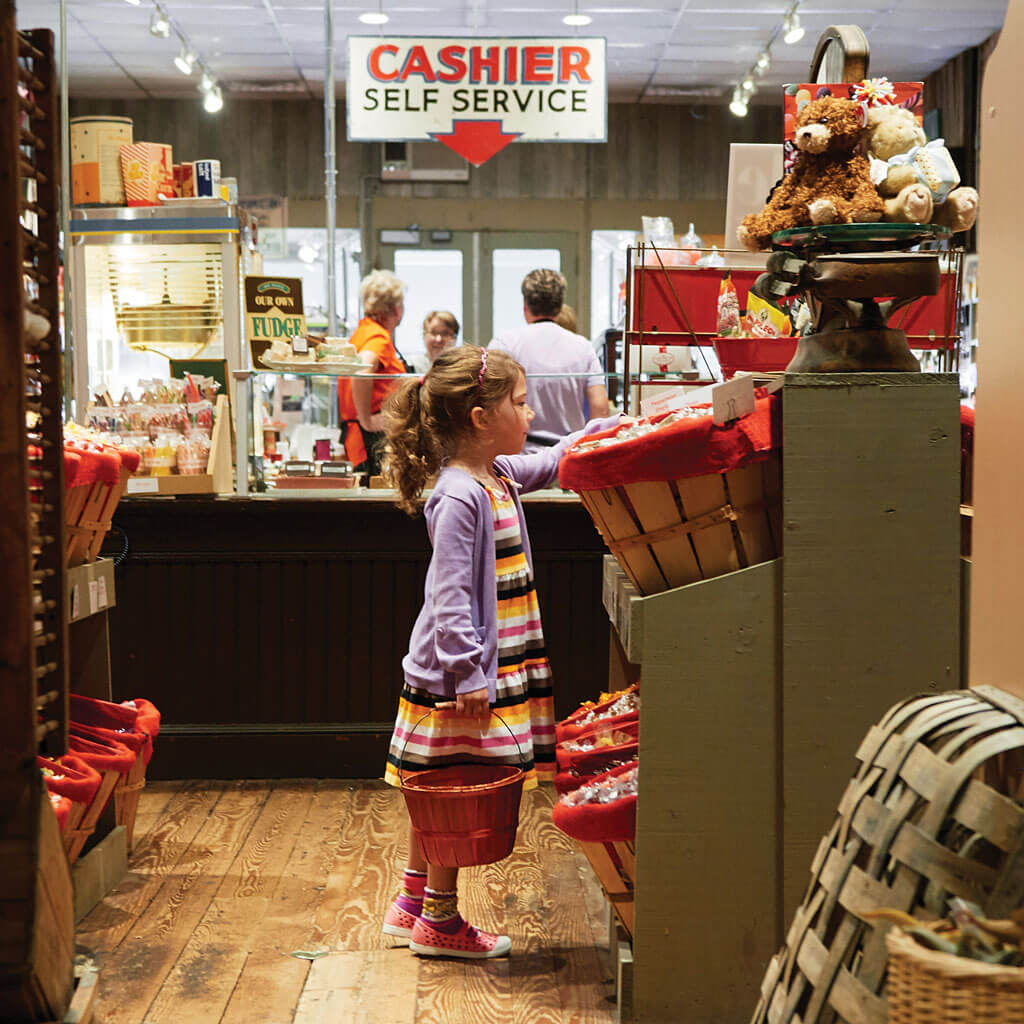 Bins brim with sweets that adults will remember from childhood — and candy that 5-year-old Hannah Motsinger will never forget. photograph by Joey Seawell

I told my kids: we’re going to go to a candy store. The little one shrieked and clapped. The big one went into Perry Mason mode. “A whole store?” he wanted to know. We call him The Toad. We mean it in a friendly way.

“And right when you get inside, is it just candy, and do you have to pay for it?”

Yes, I told him. Though I said we could buy some.

“I haven’t been yet,” I said. “But I bet there will be lollipops. And pretty much every other kind of candy you can think of.”

He names a bunch of grocery-store stuff, name-brand Halloween candy bars. “Probably not,” I told him, though I was wrong. “Probably peppermints and chocolates and any kind of candy, real candy, you can think of.”

You explain nostalgia to a kindergartner. Or to my preschooler, The Wee, the little one. The Candy Factory is geared more to me than to them, in some ways. “Oh, sure,” says Jeanne Leonard, a retired teacher who now owns the business with her sisters. “That’s what I hear most often: I haven’t seen this in years!” But my kids are, well, kids, so their memories are unclouded by romance or sentimentality or real sugar. In the store, they’re just bonkers, each of them holding a woven basket and filling it with what I’d call an obscene amount of candy, were not the entire purpose of our trip to say to these small persons: Here. Here is what it’s all about. 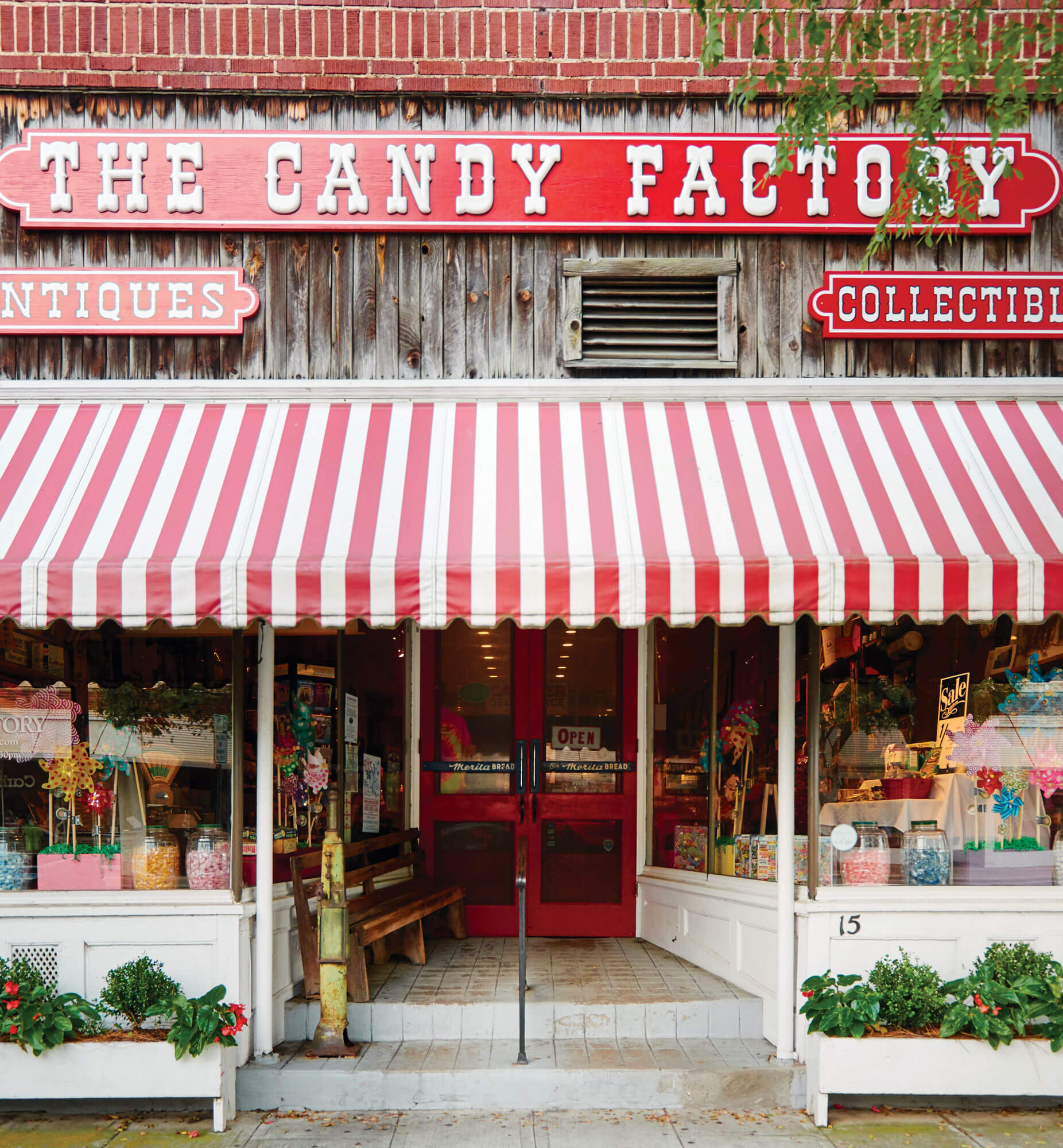 “My daddy’s father was a candymaker, and my daddy was a candymaker, but he wanted to do some other things. He wanted to make fudge. And peanut brittle. So he opened a place in the front of the Piedmont Candy Company in 1979. I bet we didn’t sell but 10 items in that little bitty store that first year,” Leonard says. But then business doubled, and doubled again, and they moved downtown. “I always helped my daddy,” she says. “When he got ready to quit the peppermint business, he sold the factory, but kept the store.” Leonard and her sisters, Beth Dean and Leigh Foster, took over the store from their mother in 2002, and they’ve run it ever since. 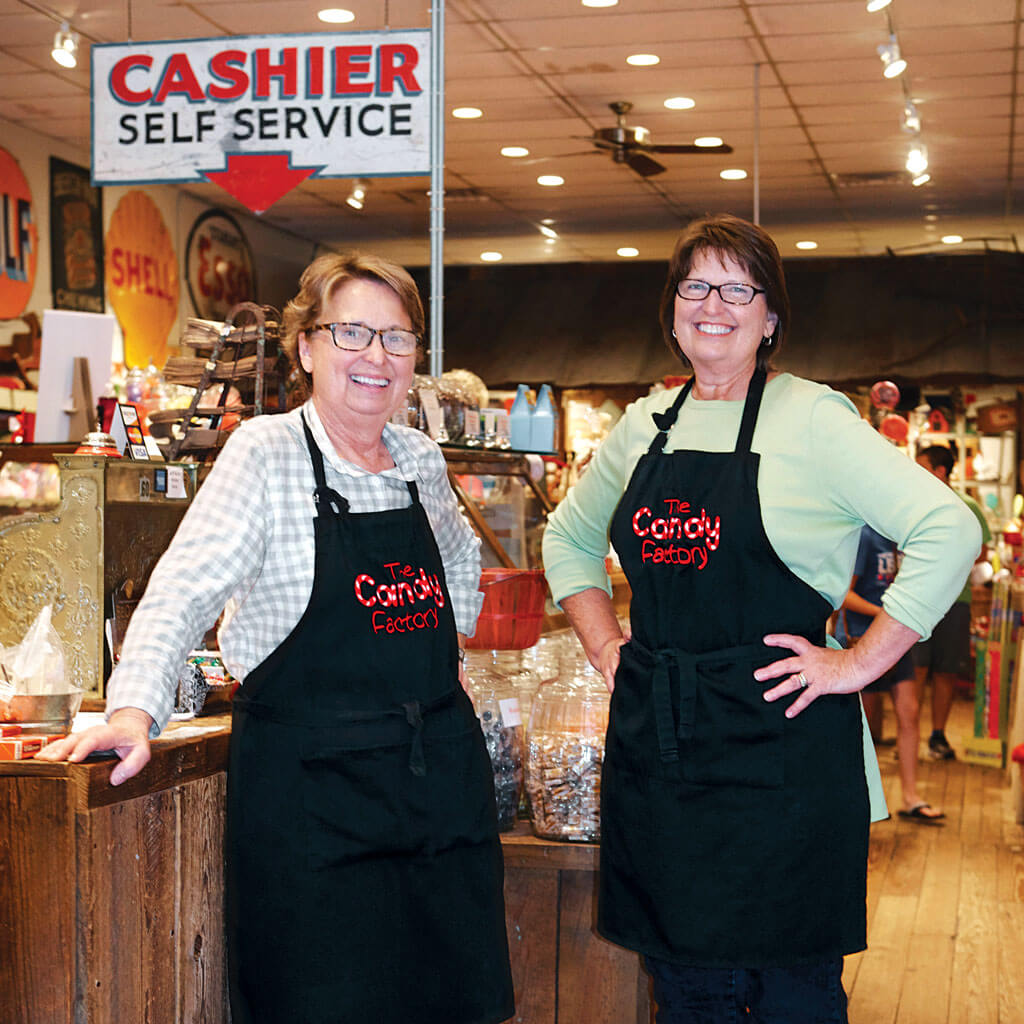 Beth DeLapp and Linda Sprinkle, who are working the counter the day we’re there, are retired teachers, too. “Most of us here are,” DeLapp says. They’re pros. They separate each boy’s haul into his own bag. They weigh everything out in melamine bowls. We spend $56.43, and this amount seems somehow outrageous and, at the same time, an enormous relief. The next time we come, I’ll be more careful, watch the boys more closely. Or, truth be told, I won’t.

We sit outside in view of the Old Davidson County Courthouse, and there’s just enough breeze to ruffle the leaves in the trees. My boys are eating lollipops the size of their faces. My wife is eating some red chewy thing I’ve never heard of. I’ve got my green rock candy on a stick, and I’m thinking, probably most folks who time travel don’t even know it. Not right at first. It can’t work like it does in the movies, where all of a sudden you’re in the middle of some ticker-tape parade. No. It works like this: You walk into a store, and it’s candy, all candy. Your kids distract you. The folks who work the store are so kind that you feel — you feel safe. Some of the rest of your life melts away. You try to show your sons a hard blue lozenge wrapped in cellophane. These are what my grandmother had in that silver bowl in the front room, you try to tell them. We weren’t allowed to eat them. We snuck them all the time.

But they don’t care about that. They don’t have a childhood to miss yet, to remember in fits and starts. They’re right in it. Plus, they’ve got more candy to eat. No matter: For now we’re out of time, in Lexington, North Carolina, in some year, some season, paper sacks of saltwater taffy and 700 other sweets right there for the taking. That breeze comes up again. I eat my candy. I’m a kid and whoever else I am, all at once. 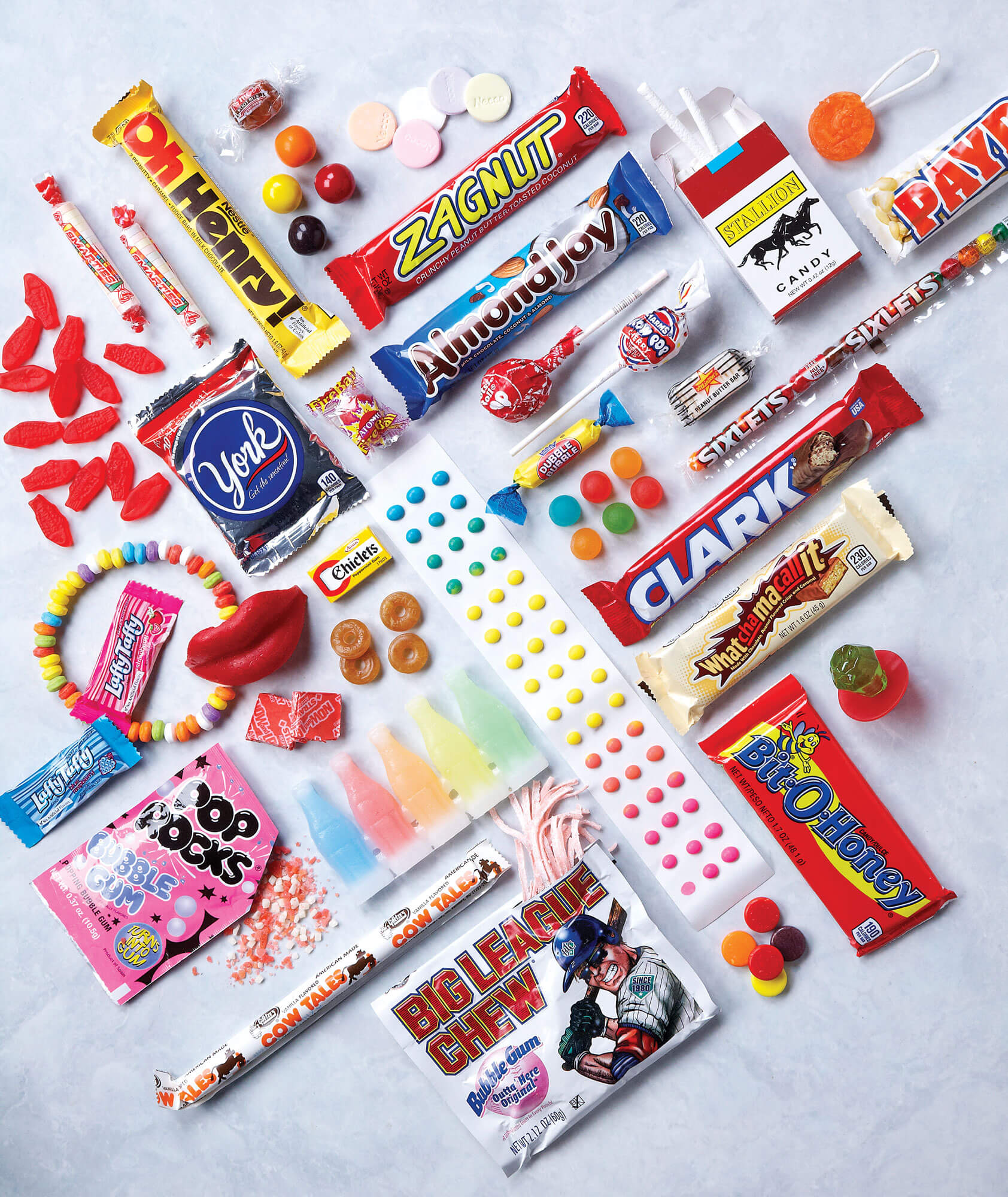 A Century of Sweets

Take a stroll down this timeless candy aisle to find your favorites.