Trey Braswell couldn’t sleep, He had just put 250,000 hens in a brand-new egg-laying barn, and Nash County was in the middle of a scorching heat wave. Temperatures had been in the triple digits for several days in a row. What if the ventilation fans weren’t working and he lost a quarter of a million birds?

Finally, around 2 a.m., he grabbed his keys and headed out the door. “I drove around the end of the barn, and some of the fans weren’t on,” he says. “I freaked out.”

Although the usual fans were running, Trey had to figure out how to override the automatic ventilation system to start up additional fans to better combat the heat. Thankfully, he got them running just in time. Not a single bird was hurt. 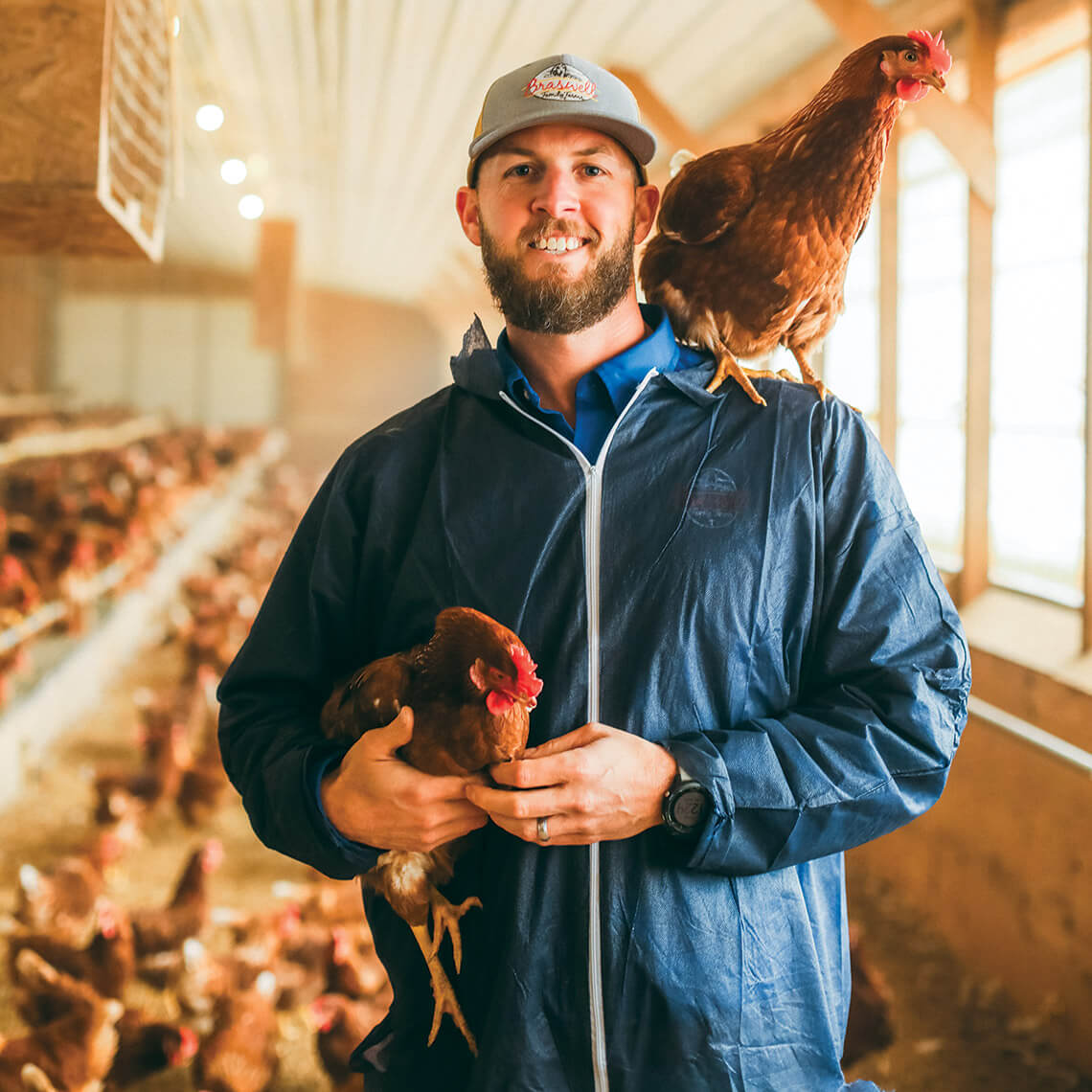 Trey Braswell, president of Braswell Family Farms, grew up around chickens. Now, they grow up around him. Photography courtesy of BRASWELL FAMILY FARMS

Nine years later, sitting at the head of his live-edge acacia conference table in Braswell Family Farms’ headquarters — built to resemble a farmhouse — he remembers that night as one of his scariest moments since taking over the leadership of his fourth-generation family business.

Trey owns the company with his father, Scott, who inherited it from his father and uncle, who inherited it from their father and uncle before that. Braswell Family Farms is the second-largest franchisee for the nationwide egg distributor Eggland’s Best: If you’ve ever eaten an Eggland’s Best egg between North Carolina and Pennsylvania, chances are good that you’ve eaten a Braswell egg.

But Trey got more than just a company from his predecessors; he also inherited their caring nature — one that shows in the way he nurtures his flock, and in the way he provides for his employees when they need it the most.

Though it’s known for eggs today, Braswell Family Farms got its start as a gristmill nearly 80 years ago. In 1943, Trey’s great-grandfather Eugene Braswell and great-great-uncle Joe Braswell purchased the 1834 Boddie’s Mill down the road from their family farm, northeast of Nashville. Customers would walk up onto the front porch of the mill, hand over a bag of corn, and wait to have it ground. The brothers were generous — families in need often left with twice as much corn as they had come with. Today, the lobby of the company’s headquarters has been modeled to resemble the front porch of Boddie’s Mill, including a tin roof over the reception area. One of the original millstones is displayed prominently in the entranceway. 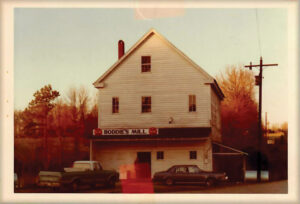 Trey’s granddad Ronald Braswell and great-uncle Gene Braswell — sons of Eugene — grew up working at the mill, and, after returning from military service, they joined what had become a feed mill business. “At that time, people had horses at home that they worked their farms with — mules, chickens, hogs, cows,” Trey says. “Pretty much everyone had animals at home, so we sold a lot of bagged feed.” As livestock agriculture evolved, Braswell Milling Company transitioned from bagged feed to commercial bulk feed. From there, venturing into the livestock business was a natural progression.

Gene donned blue jeans and focused on operations, while Ronald — the social brother — sported a suit and tie and worked in marketing and sales, selling pullets, or adolescent female chickens, which the family raised and sold before the birds reached egg-laying maturity. Later, they started contracting with other farmers to produce eggs. 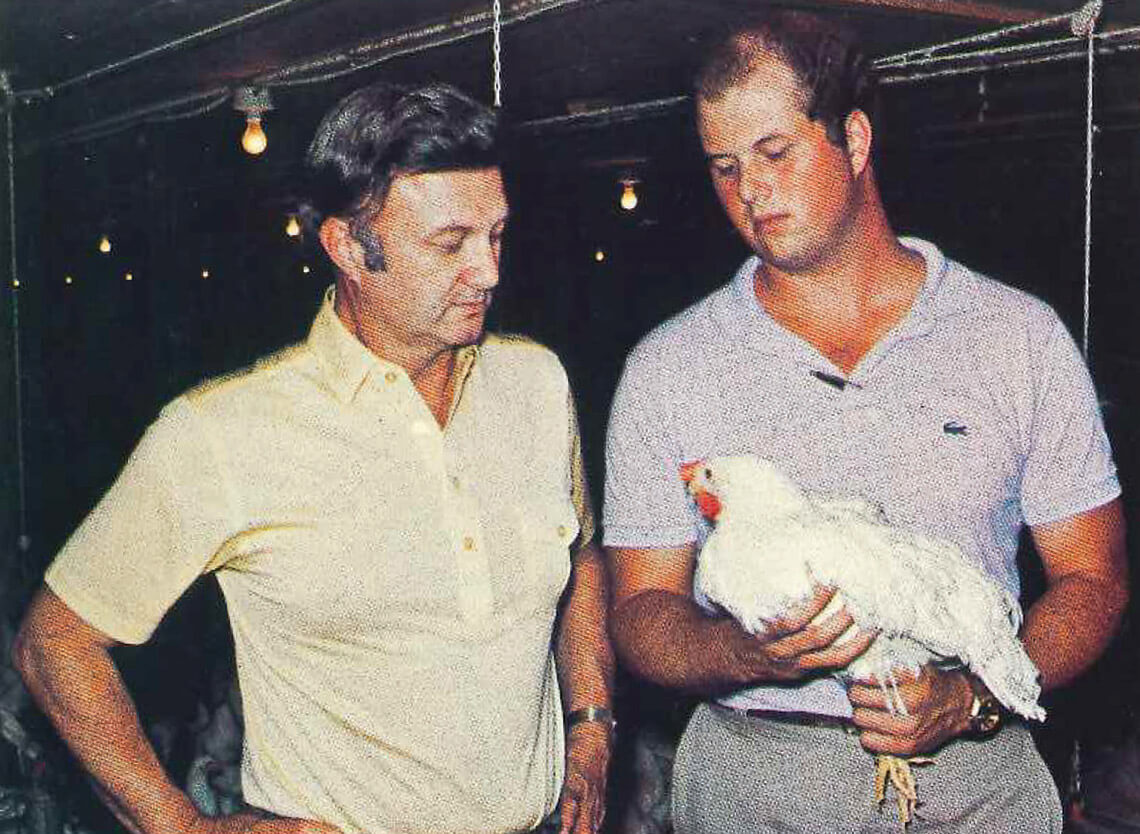 After the business shifted to livestock, Eugene’s son Ronald and grandson Scott were featured on the cover of Poultry Digest in 1982. Photography courtesy of BRASWELL FAMILY FARMS

Trey’s dad, Scott, who had his own farm in addition to working for the family business, became president in 1991. He installed the company’s first egg processing plant, allowing what was by then called Braswell Foods to wash and grade its own eggs. It was a big step in the company’s growth.

In 1991, just before Scott took over, Ronald decided to become an early franchisee of Eggland’s Best. People thought he was crazy. “At that time, eggs had a very bad reputation for being high in cholesterol,” Trey says. “Eggland’s Best had a patented feed formula for a diet for chickens that would allow the eggs’ nutritional content to be lower in saturated fat and cholesterol and have high levels of beneficial vitamins.”

Eggland’s Best began an intense advertising campaign, and, despite early skepticism, the product took off. Today, Trey and Scott’s company — rebranded as Braswell Family Farms in 2017 — produces 540 million eggs a year and buys and distributes another 120 to 180 million.

In 2008, Trey was living in Telluride, Colorado, when he began to get phone calls urging him to come home. He was in his early 20s and had just moved there from North Carolina, where he’d lived his entire life, and was excited for a new adventure in a new place where he didn’t know anybody. But his father was in poor health, suffering from heart problems and debilitating migraines, and he could no longer run the company. Trey was needed.

“I wasn’t ready,” he says. “But I felt a strong sense of responsibility. This company is what kept food on our plates, and all the generations before me had worked so hard to get us where we were.”

Trey came home, but he struggled in his new role. He was young. He had never led a company before. His father was too ill to provide the guidance that he needed. The year after Trey took the helm, his general manager resigned. “The first three years were brutal for everyone,” Trey says. 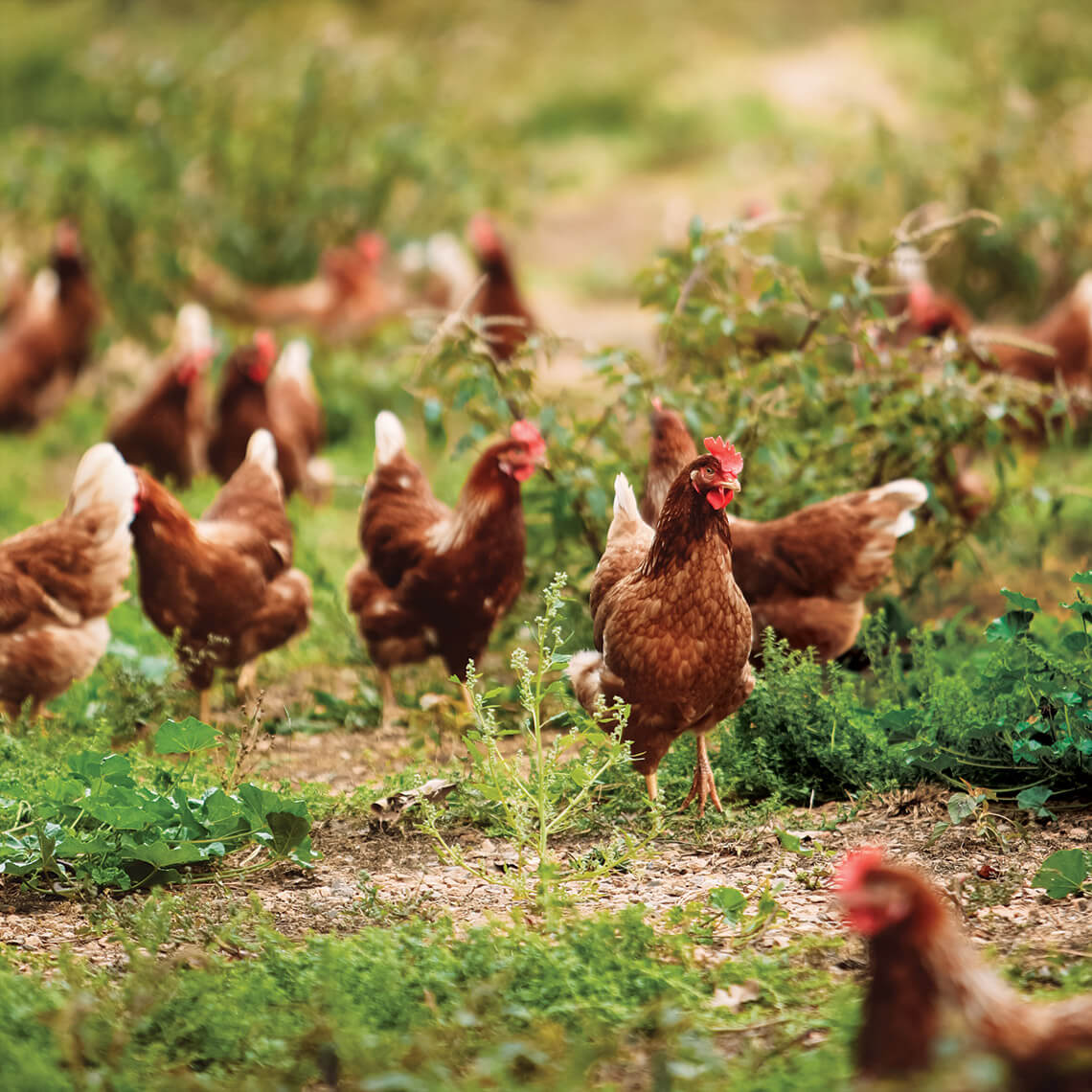 Braswell Family Farms’ 1.7 million chickens live in all types of environments, including 21 acres of pasture, where each bird has 108 square feet to roam. Photography courtesy of BRASWELL FAMILY FARMS

But with faith and mentorship from other business leaders, he made it through. Although it happened sooner than he’d planned, Trey had known that he would probably come back to run the business one day. He loved agriculture and had studied business management and poultry science at North Carolina State University. “Agriculture is the backbone of society,” he says. “And I just couldn’t imagine doing anything else. I love to plant and grow things. My heart is drawn to nurturing.”

As a child, Scott would take Trey to visit the baby chicks and explain to him that they needed the right food, air, and water to grow. In middle and high school, Trey went hunting with his maternal grandfather, Dick Parker, which instilled in him an appreciation for the land. After college, Trey asked Dick to teach him to garden, and together they planted, watered, weeded, harvested.

Now, Trey shows his nurturing nature each time he checks on his hens. “When you walk into the chicken house, you want to hear the birds cackling and clucking and talking,” he says. “It’s really soothing.” He looks to see how the birds are acting, and picks them up to examine their feathers and check for food in their crops — the part of a chicken’s digestive tract located in her breast. Birds often follow him around and peck at his boots. 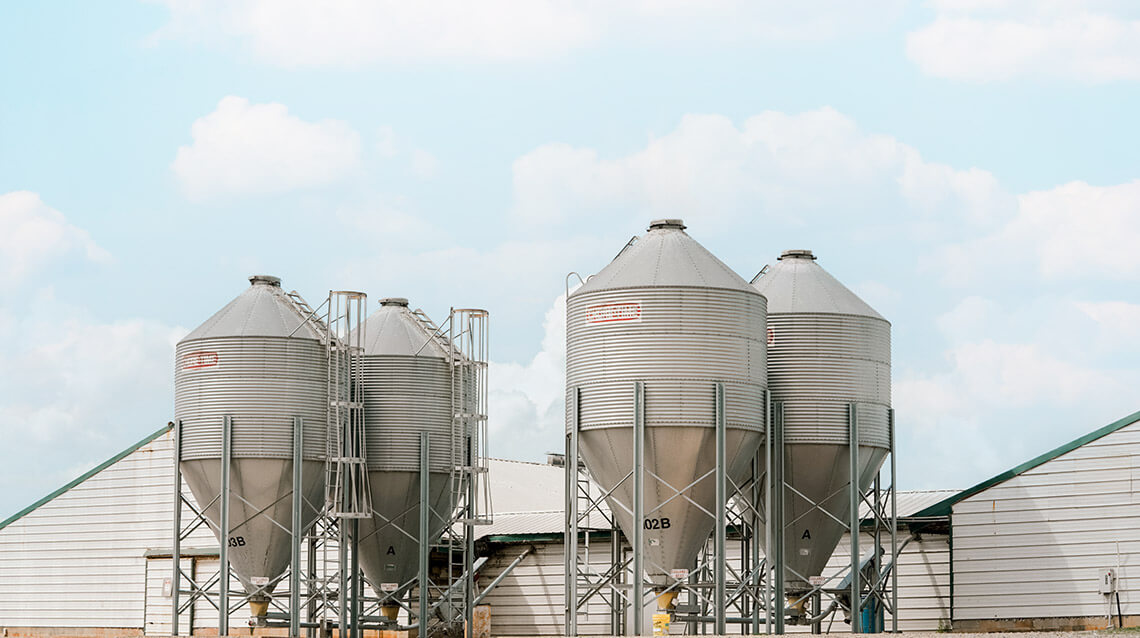 Feed for chickens, turkeys, and hogs is still a big part of the Braswells’ operation, producing around 175,000 tons a year. The company is one of the largest organic feed mills on the East Coast. Photography courtesy of BRASWELL FAMILY FARMS

Trey operates the business with the same generosity that Eugene and Joe showed when they gave free cornmeal to families in need. He’s set up a caring team to offer financial assistance for employees — like the one who, shortly after finally being able to afford a car, had a transmission problem and couldn’t pay for the repairs. The company provided.

That generosity has defined Braswells through the generations. When Scott was president, longtime employee Lisa Lewis lost her 21-year-old son, Brandon. Scott and his wife, Mary Lou, came to Lisa’s house the night he died, and again several times that week. Mary Lou cleaned; Scott arranged for Brandon’s employer to set up farming equipment, which Brandon had worked on as a mechanic, outside of the funeral home as a tribute. “I felt like I was beyond an employee,” Lisa says. “Like I was part of a family.”

Family is more than just part of the name of the business — it’s what the company stands for. When Trey was a kid, he called his dad’s employees aunts and uncles. One day, he hopes that his own children will become the fifth generation to run the business. But he won’t push them into it. He wants them to find a calling — like he did.