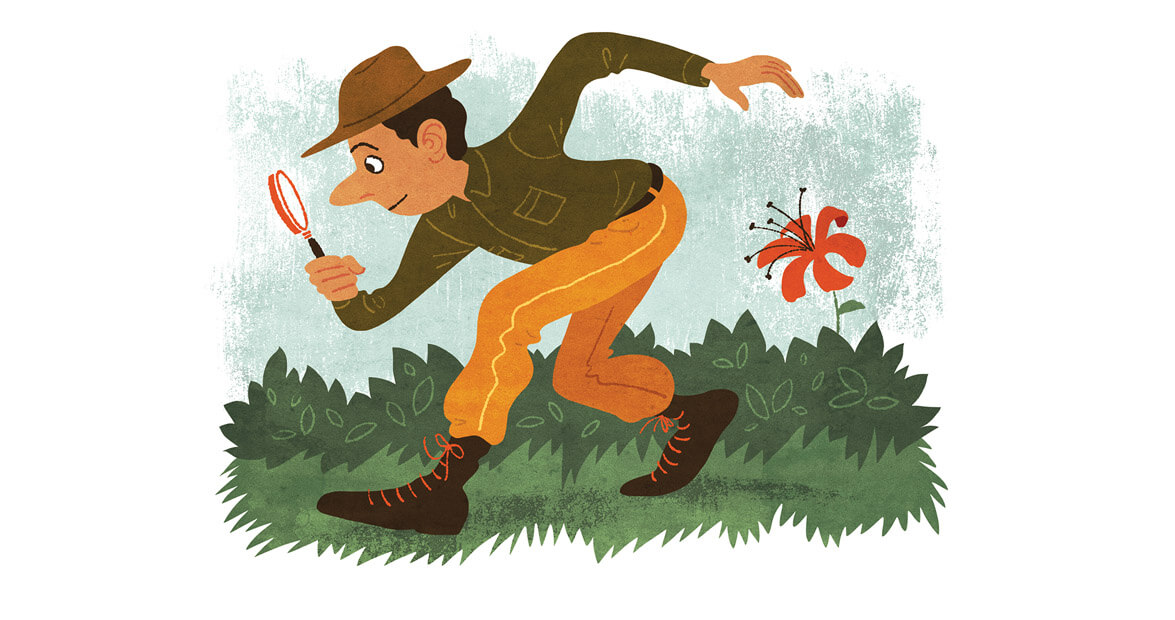 Like its name, the Carolina lily is at once demure and flamboyant, and it’s easy to imagine baby girls across North Carolina christened after this gorgeous flower.

I have clear, but thoroughly untrustworthy, recollections of the Carolina lily preening brazenly in my wife Joan’s flower beds in Old Fort, the McDowell County village where we lived with our son, Jacob, then a year old, from 1988 to 1990. In fact, our home — with a view of Mount Mitchell from an abandoned apple orchard — was shadowed by the Black Mountains range, only a few miles off in the clouds. Among those peaks, pioneering French botanist André Michaux spotted the first North Carolina Carolina lily during one of his botanical forays through the Southeastern United States in the late 18th century, and had his breath taken by its beauty.

Purportedly, Michaux had spied the lily earlier, in South Carolina, though I prefer to think this fact merely apocryphal. Its official Latin name is Lilium michauxii, though Michaux himself initially named the mysterious flower Lilium carolinianum. To my mind, there’s little doubt that he meant North Carolinianum. It is, after all, our state wildflower. The lily is typically described as reddish-orange, and it is; but its true color is a hybrid: Along with reddish-orange, it is yellow and sometimes mottled brown, and champagne pink, as well. Early botanical drawings depict it as decidedly crimson. The lily stalks are three to four feet high, and the flower lavishly swoons from the top, reflexed petals exposing the nectary furrows, then a spray of green filaments that culminates in a three-lobed stigma and burgundy anthers.

I conflate my earlier vision of the Old Fort Carolina lily with the lily beds Joan tends here in Watauga County, where we now reside. I’ve been keeping company with my wife’s lilies for so long that I felt sure I knew all about Carolina lilies. But in truth, I’ve never seen one. All along, apparently,  I’ve mistaken the Turk’s-cap lily for the Carolina. An occasional impersonator, the Turk’s-cap seems to model a number of colors, but one in particular favors the Carolina lily in surprisingly exact ways — especially to the untrained eye. There, the misidentification.

The Carolina Lily is known to bloom in July and August on Old Schoolhouse Gap Road on the Caldwell County side of Grandfather Mountain, and also in the tiny Avery County community of Altamont, in Christmas tree country, between Crossnore and Linville Falls. A particular plant might bloom for six weeks. An individual flower lasts three weeks, perhaps four. At most, a dozen stems congregate in a patch — no giant stands or clusters. Nor do they easily propagate. You’ll find them in the wild solely through exploration. They will not reveal themselves.

The state insect is the honeybee; the mammal, the gray squirrel; and, of course, the state bird, the cardinal. These are indisputably lovely, cherished creatures, but hardly exotic. We see them constantly. On the other hand, there is decided irony in the fact that few North Carolinians will ever see their officially designated state wildflower save through photographs and drawings — which makes the Carolina lily all the more alluring.

Now that I’ve begun to obsess about lilies and the wiles of memory, I’ve studied countless photographs of the Carolina, and I guardedly wager that I could identify one — even if it were standing next to a Turk’s-cap, which is larger and bears more flowers than the Carolina. But it strikes me that a lily isn’t about size at all; rather, it’s about grace, delicacy, and beauty — and, of the two lilies, the Carolina claims dominion in these areas. Its color is two notches more indescribable than the Turk’s-cap, and, if lilies can be said to embody a certain je ne sais quoi, then the Carolina exudes hers in enchanting waves. Equally enchanting is the fact that, though the Carolina lily is never referred to as endangered, I have heard it called scarce, and I’ve already termed it mysterious. It is decidedly elusive. Ephemeral. A spectral flower that prefers anonymity, exile, secrecy — and, therefore, begs to be mythologized. I’ve been seduced by it from afar, though my chief aim come midsummer is to lay eyes on one in person.