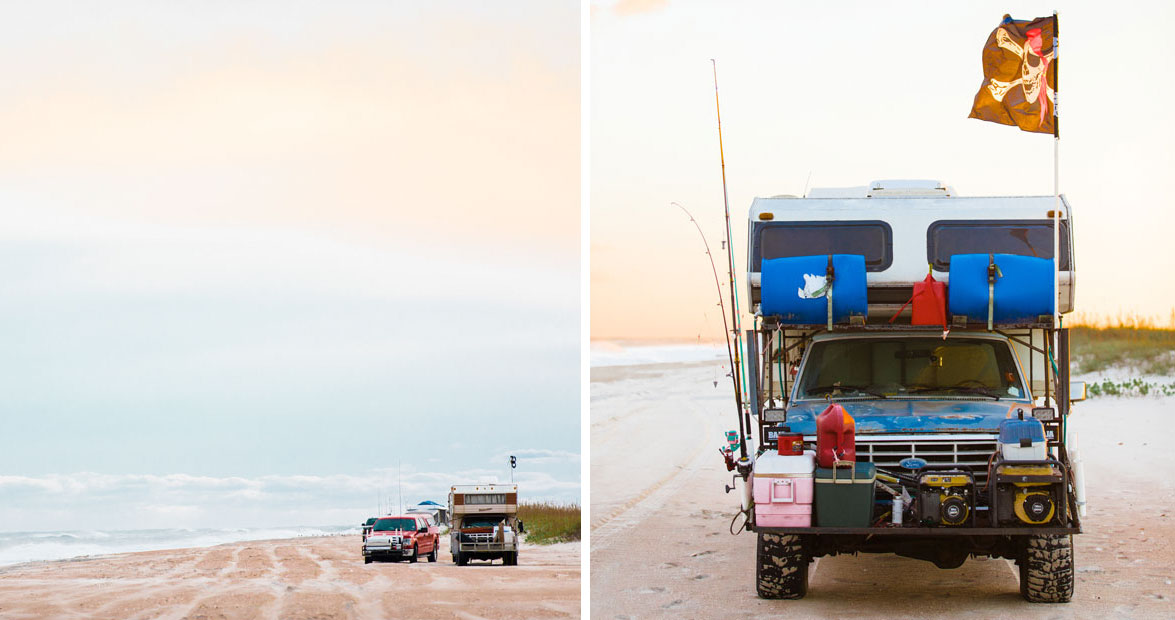 They come riding across the sand like cowboys, rising and falling like the waves on the shore, pickup trucks rigged up with campers on their backs, extended racks jutting from the front and rear loaded down with coolers and surf rods and generators and shovels. They have no fear and ride with the kind of courage you only really find here, on the edge of North Carolina’s wildest shore: South Core Banks, known to many as Davis Island.

Ten miles from Cape Lookout Lighthouse might as well be a million miles from home, as wind from a nor’easter blasts the entire length of the barrier island. Yet the anglers are still reading the water, driving up and down the shoreline in homemade vehicles, looking for cuts and sloughs, points and drops, looking for a place to park, to “drop anchor” and settle in for a long and stormy night. The drum are running, and in this state, that means an old-school reunion of the old-school camper-fishermen who call this island home.

“Home away from home,” Stan Bassinger says. He’s a grizzled, wind-burned angler from Salisbury on a four-day survival trip with his friend Charlie Hutton. They’ve been coming here for more than 30 years, drawn by one of the last original seascapes in this part of the country, a land that changes constantly — one grain of sand at a time — yet looks much as it must have hundreds of years ago. 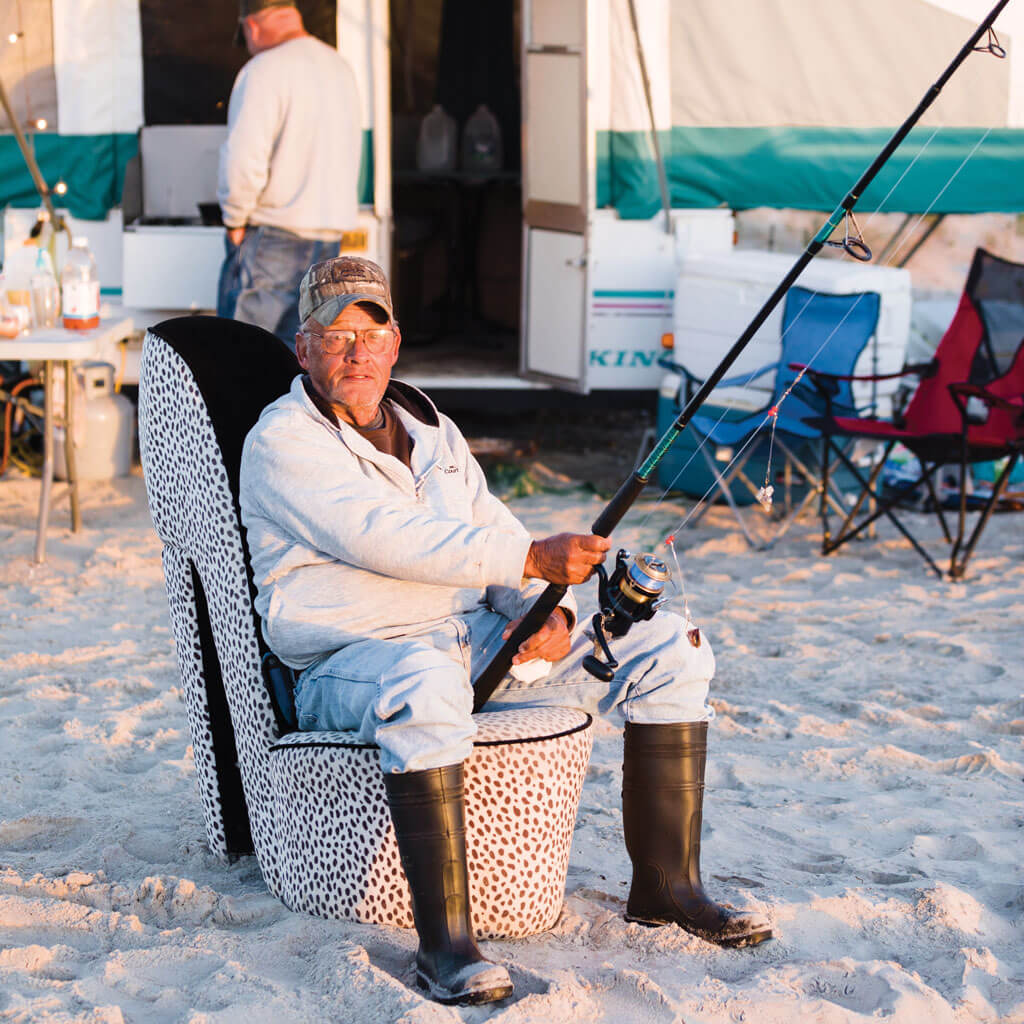 This surf fisherman from Rowan County comes to Davis Island with his friends for the red drum run every year. Whoever catches the most fish wins the “trophy” of sitting on the high-heel chair.  photograph by Baxter Miller

That’s what draws these intrepid fishermen to the last of our wild shores to test themselves against the elements. This is no place for the meek. The virtually uninhabited sliver of an island is a destination for some of the quirkiest adventurers you will ever meet. “This is the greatest place on earth,” says another Rowan County angler, who is sitting on what appears to be a shoe. No, it’s not just a shoe but a stiletto, a leopard-print, high-heel chair that he and his fishing buddies pass back and forth, year after year, when they all meet for the drum run.

The lucky soul who catches the most fish gets the “honor” of fishing from the chair the next year, thus enduring countless questions and long stares from passersby.

And somehow, it fits right in.

These are some of the best surf anglers on earth. Some are in tents. Some stay in the rustic cabins built just for fishermen. But the most dedicated are those who camp in their own contraptions, the same vehicles that brought them here: modified off-road mechanical marvels. Some are new and some are no more than rusted old RVs and trailers, step vans and school buses — four-wheel experiments equipped with refrigerators and televisions and shortwave radios and bunk beds and stoves and kitchen tables covered in hooks and leaders and weights and fish guts.

Doug Hink arrives from Cary in his 1976 three-quarter-ton Ford pickup truck that’s rusted and weathered from hurricanes and nor’easters. He’s parked into the wind. The old truck is fitted with a ’72 Wolverine camper and an array of upgrades, including welded-on J-beams that extend the chassis, a rebuilt radiator, and a new stove. It also has air-conditioning, hot water, and a refrigerator that serves as a closet. But, Hink says, “No computers.”

He and his fishing buddy Jeff Finkbeiner call their truck Sweetie. And Sweetie looks about done for, having recovered from storms to be repaired and returned to service. “She’s tired,” Hink says. “But she’s good to go. I’ve only had Sweetie for 17 years. She’ll probably outlast all of us.” 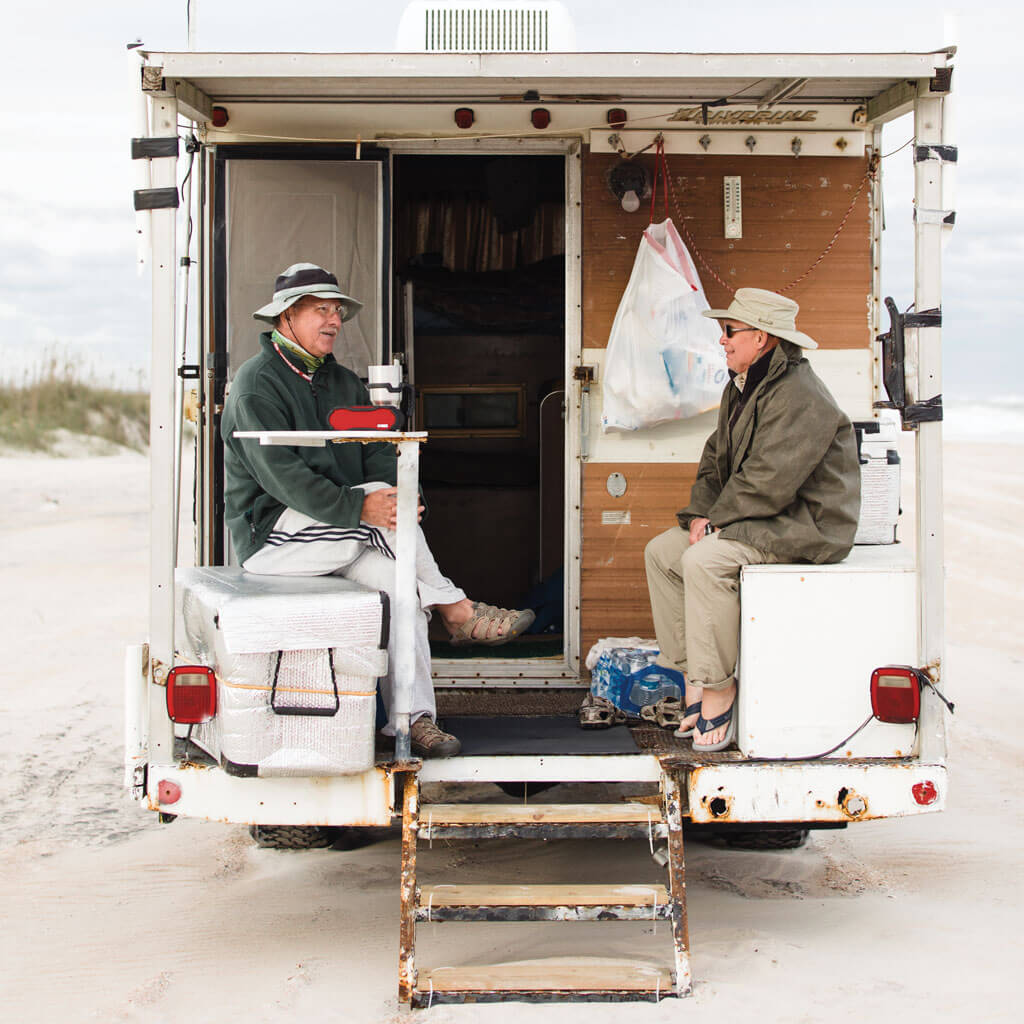 Doug Hink (left) and Jeff Finkbeiner co-own their rusty orange RV. They claim that it’s the oldest one on the beach. And they might be right — but folks are too busy catching fish to keep records. photograph by Baxter Miller

Hink and Finkbeiner think they have one of the oldest trucks on the island. At least among those not buried in the sand. Over time, the National Park Service (NPS) and volunteers have dug up and removed more than 1,500 abandoned vehicles. Admittedly, some contraptions like Sweetie may appear ready to retire on a sandy shore, but Lance Brown, the president of the Davis Island Fishing Foundation, says a lot of these Core Sound campers are still in their prime.

“Some unique vehicles make their way here,” he says. “Some are nothing more than personal four-wheel-drive trucks modified, or crafted, into a system to carry their fishing equipment. Others have been highly modified, basically an old Merita Bread truck turned into an RV.”

Brown, from Lake Norman, has been coming here most of his life to fish for prize-size red drum. The foundation runs tournaments and, among other things, supports the conservation efforts of the NPS while demonstrating the responsible use of off-road vehicles for beach access. “It’s important to understand that these people aren’t irresponsible,” Brown says of the camper-fishermen. “These vehicles aren’t junk. A lot of ingenuity goes into them. It takes a lot of work and imagination to add on-board, self-contained showers and restrooms to a pickup truck. These are built for a purpose, and that’s to fish on South Core Banks.” 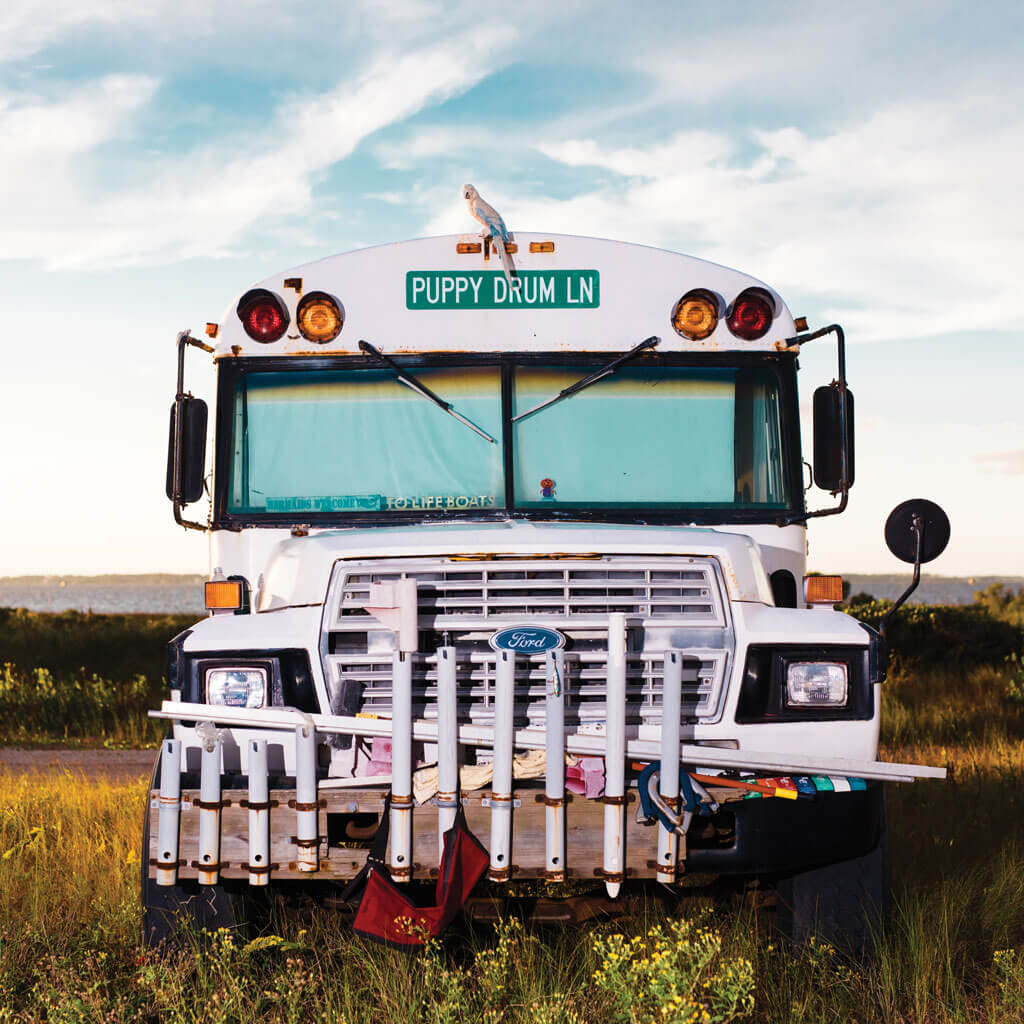 Some fishermen park their vehicles for months at a time, like the bus near the campground. Empty rod holsters mean the owner’s gone fishing. photograph by Baxter Miller

The vehicles line up on the beach, positioned just above the high-water mark, like a flea market on the edge of reality. Fishing rods are mounted in crude holders or planted in the sand or built into the vehicles themselves, like snaggled teeth tethered to the ocean by miles and miles of fishing line.

“This is serious business,” Bassinger says.

The sky behind him has turned deep black, and the wind is rocking his truck camper. Up and down the beach, fishermen are still casting into the churning waters. Yes, a nor’easter is blowing in, and this is going to be a long night on the island.

But the drum are still running. The men stand side by side, telling stories and daring the wind and the rain to end a trip they’ve been planning all year. “People get to know each other through the years,” Hink says. “It was better years ago before all the ‘northerners’ came, though.” He’s talking about fishermen from Cape Hatteras.

“It’s a melting pot,” Brown says. “The people are as different as the vehicles themselves, people who have dramatically different socioeconomic backgrounds. From people who have to save up all year to go on a weeklong camping vacation to people who are wealthy and want to get away from everyday life. When you’re standing on the beach, fishing, everybody’s equal. My rod might be different from yours or my truck might be newer than yours, but everybody here is here for the same reason.”

To catch a fish you can’t even keep.

Anglers are in search of red drum that have grown to “citation” length. The little puppy drum and even the slot-limit fish that land on your hook, well, those you can keep. They provide entertainment or dinner. But the minimum 40-inch red drum is the one that the North Carolina Marine Fisheries Division will award you a certificate of citation for landing. It’s the elusive catch that makes everything about this island worth the effort. And the effort can be exhausting. 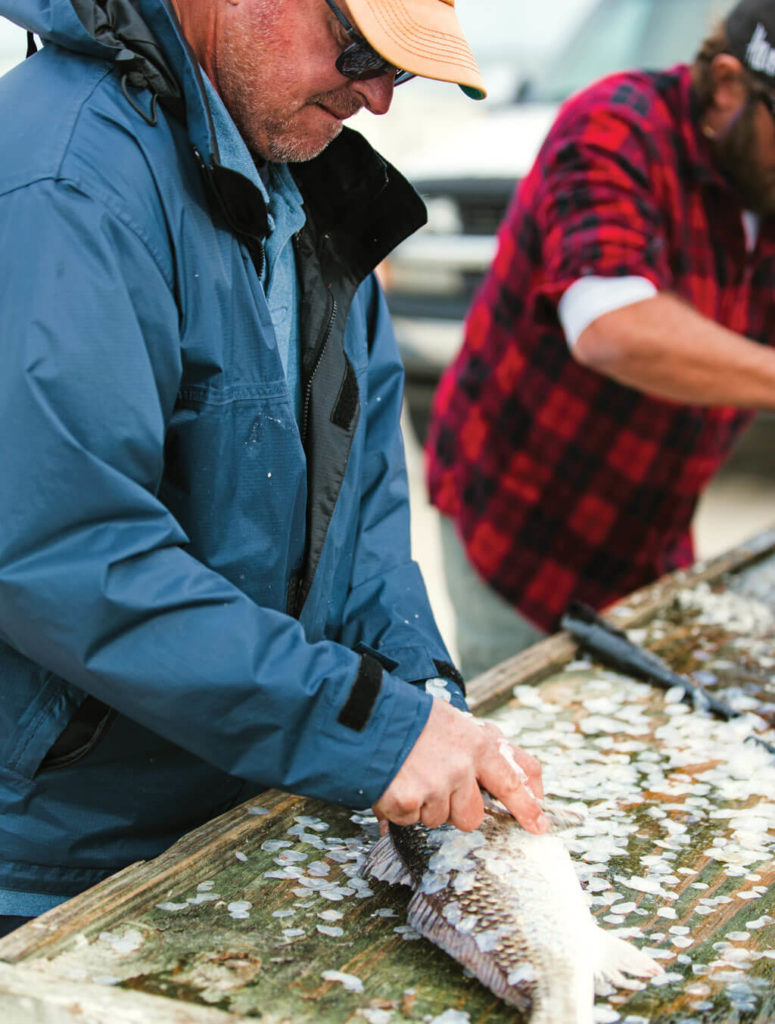 This is a daunting place, and a fishing trip here is no mere fishing trip. The fishermen all have stories of lost equipment and unexplained occurrences. A “northerner” from the Tidewater area of Virginia describes walking out of his camper one morning to find that all of his wood had disappeared during the night, a big pile of driftwood that he’d been gathering for days — just gone. “There was no sign of anything,” he says. “Not a footprint or even a twig left from the pile. It was like the wood evaporated.” Yes, the wood lifted itself off the ground and vanished — some folks out here believe that’s possible.

The moody mystery of the place is part of its appeal. Under its spell, fishermen stay as long as they can. The Tidewater angler says he’s found a way to stay and fish even longer than the 14 days the park service allows. “You can just go home for one day and come right back, if your wife will let you,” he says. “Or, in my case, if you’re divorced.”

As the storm approaches, some of the fishermen get skittish. To stay or go? Most will wait to see what the drum do first. When a storm blows in, howling from whatever direction it arrived, everything not tied down blows away. The sand comes alive as the wind picks up the island and moves it. The old-timers say you can hear it moving at night.

That’s not all you hear at night out on Davis Island. You hear pirate ghosts wailing in the wind. You hear the music of the spheres in the darkness above. When the storms hit, you hear entire tents being ripped from the sand and tossed down the beach, sometimes with campers still inside.

And even without a storm, when the sun sets here, the darkness is profound. Nights are so dark that starlight actually illuminates the ocean and the sky, so many stars that it’s hard to make out even the most recognizable constellations. Socked in by storm clouds, it might be the darkest place on earth.

When morning light finally comes, the drum are gone, blown away, and a line of campers waits for the ferry. The anglers appear as worn out as their vehicles, a vacant look in their eyes, deep creases on their sand-blasted faces, tape and bandages on their arms and hands. There’s not much talking as the ferry pivots away from the dock and heads back to the mainland.

Looking back from the middle of Core Sound, the barrier island shrinks in the distance. Time to look toward the mainland. Waiting there in the parking lot is a new assortment of odd-looking trucks and campers, the fishermen busily filling up tanks and coolers and tackle boxes. Clean and refreshed faces. They’re all smiling and chattering as they nod to the anglers driving off the ferry: one group headed out for the adventure of a lifetime and the other toward a good night’s sleep. And maybe a trip to the auto parts store.