Under a pavilion a few steps from Telma Moran Juarez’s house in the Charlotte suburbs is an outdoor kitchen set up just like her mother’s back in El Salvador: two brick firepits for burning logs into coals, a waist-high wooden table with a fireproof concrete rectangle set in the middle, cement blocks that she arranges in U-shaped “corrals” to hold burning wood and hot coals, and battered racks on top that are easy to pull into place or drag out of the way. She doesn’t just cook over the fire. She cooks in the fire, around the fire, and near the fire. She even makes coffee there, using an earthen jug that belonged to her mother.

Moving chunks of simmering pork belly from one pot to another, judging temperature and time by instinct and experience, Telma seems impervious to the white smoke that billows around her head. Her eyes don’t even seem teary. “She knows the right amount of fire,” says her youngest daughter, Miriam Espaillat. “It’s not a stove you can turn down.” 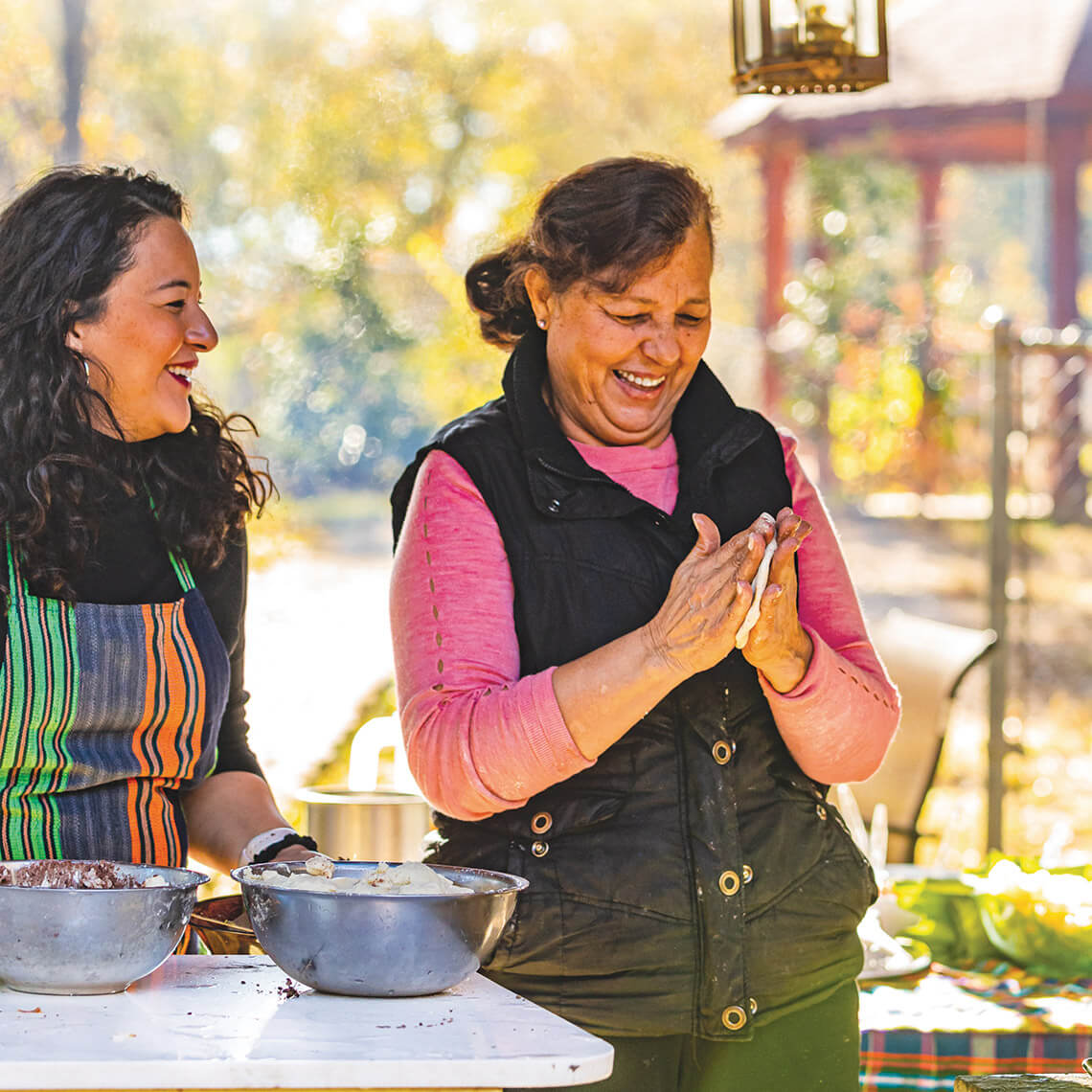 Miriam Espaillat (left) looks on as her mother, Telma Moran Juarez, flattens masa between her palms to get a good seal on a pupusa. The two are preparing their family’s big Saturday feast. photograph by Rémy Thurston

Miriam’s husband is Dalton Espaillat, whose Raydal Hospitality Group has quickly become known for its popular Latin American restaurant chains in Charlotte. It consists of 23 locations of Sabor Latin Street Grill, Three Amigos, and La Caseta (“Mother-Made Latin Food”), including a spot inside Bank of America Stadium. At La Caseta, the menu is organized by the countries where the family has ties — tacos (Mexico), pupusas (El Salvador), arepas (Venezuela), and empanadas (Argentina). When the first La Caseta opened in June 2020 in Camp North End, Telma trained all of the employees in the correct techniques for making pupusas.

Dalton is Dominican — his versions of some of the dishes are a little different from those of his wife’s family. But celebrating the food of this extended clan, with all of its regional variations, has always been a part of his restaurants, starting with Sabor. In the beginning, Dalton says, he would often charge less for dishes that were less familiar, just to get people to try things beyond tacos and burritos.

Getting the chance to eat his mother-in-law’s real-deal Salvadoran food is always a treat. “Twenty years ago, nobody [in Charlotte] knew what an empanada was, what a pupusa was,” he says. “I had to teach them how to say it — and then I had to Southernize it.”

Telma shares her house near Huntersville with her husband, Jose Guillermo Moran, known by the grandkids as Papi Memo (Memo is the nickname for Guillermo in El Salvador). The home is constantly filled with their sprawling family — three daughters, a son, and their spouses; a close-knit pack of 10 grandchildren; and assorted aunts, uncles, and friends. Their family ties crisscross Latin America, not to mention the United States.

Preparing big feasts isn’t just about being a family that cooks together. This family crossed borders and decades to end up together in the Charlotte area. “We were born into extreme poverty,” Miriam says. When the children — Ruth, Ana, Rene, and Miriam — were young, Jose and Telma left them with Jose’s mother in her village and fled El Salvador around 1983, coming to the U.S. undocumented in a desperate bid for a better life. They wouldn’t see their children again for six years. 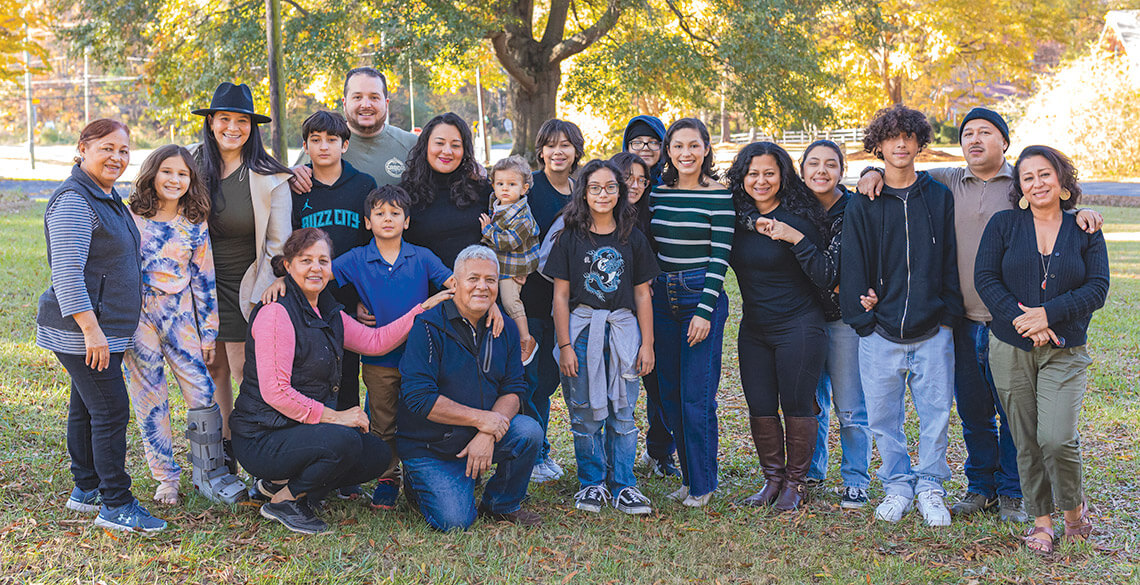 Telma Moran Juarez and Jose Guillermo Moran (kneeling) are flanked by their huge family at their home near Huntersville. photograph by Rémy Thurston

At the time, El Salvador was in the middle of a civil war that stretched from 1979 to 1992, as the military-led government fought with the Farabundo Martí National Liberation Front. It was a brutal period of scorched-earth campaigns, repressive policies, and retribution. In the U.S., the Morans took whatever jobs they could get, with Telma working as a nanny in New York City.

They were singularly focused on reuniting the family. Telma’s sister, Emelina Paredes, studied to be a nun and then requested a post in the United States so that she could help her sister and brother-in-law get the children here. The family eventually settled in Queens, and they were finally able to reunite with their children around 1991. By then, Miriam was 7 and hadn’t seen her mother since she was 18 months old. At first, she says, she refused to believe that Telma was her mom. Miriam has struggled to make peace with that, she admits, although they are all very close today.

In 1997, Telma opened a pupusa shop in the Flushing neighborhood of Queens, and all of the kids worked there as teenagers. She still owns the shop, frequently traveling back and forth between New York and Charlotte, where her children have all settled. About five years ago, she and Jose decided to put down roots in Charlotte, too. They didn’t even see their house before they moved — they entrusted their grown children to pick one for them. It’s in a rural subdivision with plenty of yard for Jose’s gardening. They’ve now bought the houses on either side to rent out, gaining even more land.

To make agua fresca, Telma eschews her daughters’ preference for a blender — that makes the beverage too smooth, she says. Instead of cutting away the tough rind and the dark “eyes” of the pineapple, she cuts it in half, then patiently uses a blunt knife to chop down into the yellow fruit inside. She works around the hard core in the center until she’s left with two empty hulls and the two halves of the core. Mixed with cold water and sugar, the juicy pineapple pulp makes a rich, cold drink that everyone sips from small plastic cups. 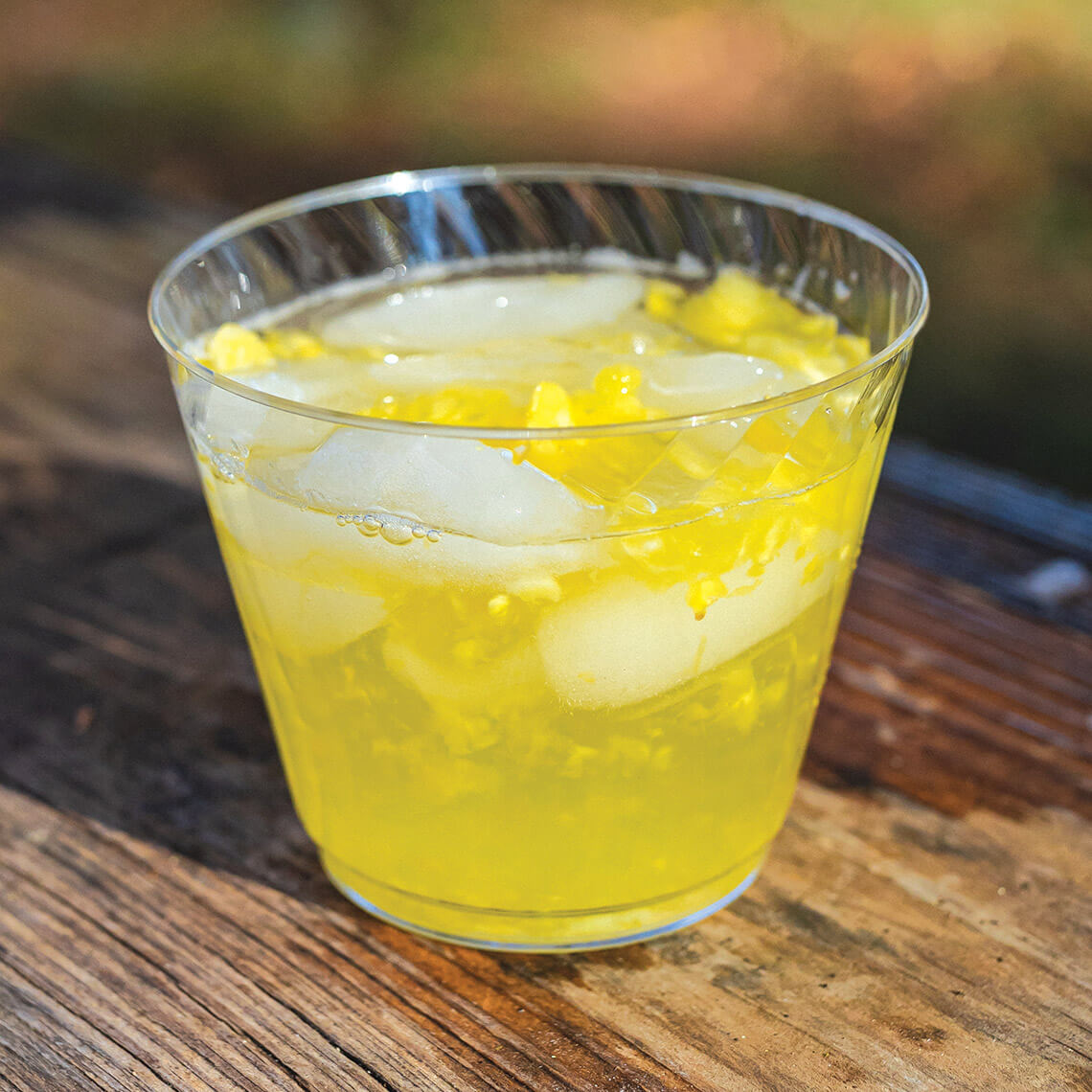 The family made agua fresca by scooping the flesh, bit by bit, from a ripe pineapple and combining it with water and ice. photograph by Rémy Thurston

For dessert, Telma steps inside to make Salvadoran “quesadillas.” They’re not the cheese-filled tortillas that Americans know. They’re fluffy cakes, similar to pound cake, made from rice flour and soft, fresh cheese, with sesame seeds sprinkled on top. She makes them small, about the size of your palm, using tin molds that she brought from El Salvador.

She’s been working for two days on this lunch, first cooking the small red beans that Salvadorans call frijol rojo de seda, or red silk beans, over the fire. The next day, she pureed them in a blender and fried them in pork fat over the fire. 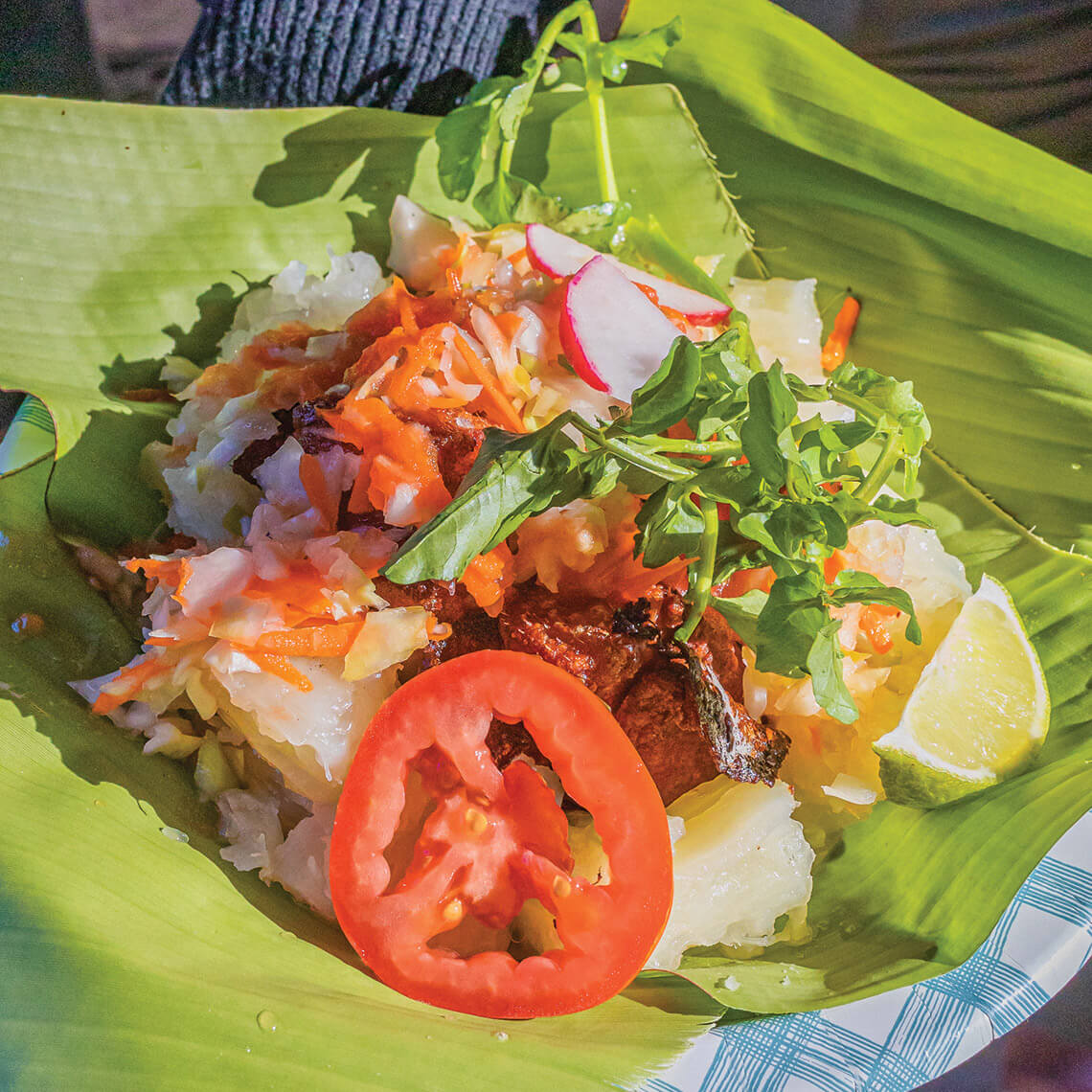 Boiled yuca with the works is served on banana leaves topped with watercress and curtido. photograph by Rémy Thurston

For the pupusa filling, she started at 10 a.m., simmering chunks of pork belly and tossing them into a second pot with a little fat to make crispy chicharrones. When the meat is ready, Jose and Rene clamp a grinder onto a worktable and grind the chicharrón into a big pan, where it gets mixed with the refried red beans, a few plum tomatoes, and fresh cheese. “To make a pupusa is five minutes, but to make it is five hours,” Miriam explains, checking for her mother’s approval as she chops cabbage for curtido. Meaning: It’s all about the prep.

Those last five minutes finally come at 2 p.m., and everyone starts to rush around. Jose shovels fresh coals onto the cooktop, while Telma and Emelina take the dough, made from corn flour and water, and pat it out into small rounds. They work it so quickly that it looks like a child’s game of pattycake. They place a little filling in the center, fold the dough over, and pat it out again to form a round, flat pancake. Then, they dip their fingers in oil to coat the outside before placing each cake on a hot griddle over the fire. Rather than pour the oil straight onto the griddle, Telma prefers to oil the cakes directly so that they stay soft as they brown. Her daughters step in to help, cooking four pupusas at a time and using a spatula to turn them. Telma doesn’t bother with the spatula — she just uses her fingers to lift the edges to check for browning, and then she flips the pupusas with her hand, not even seeming to notice the heat. 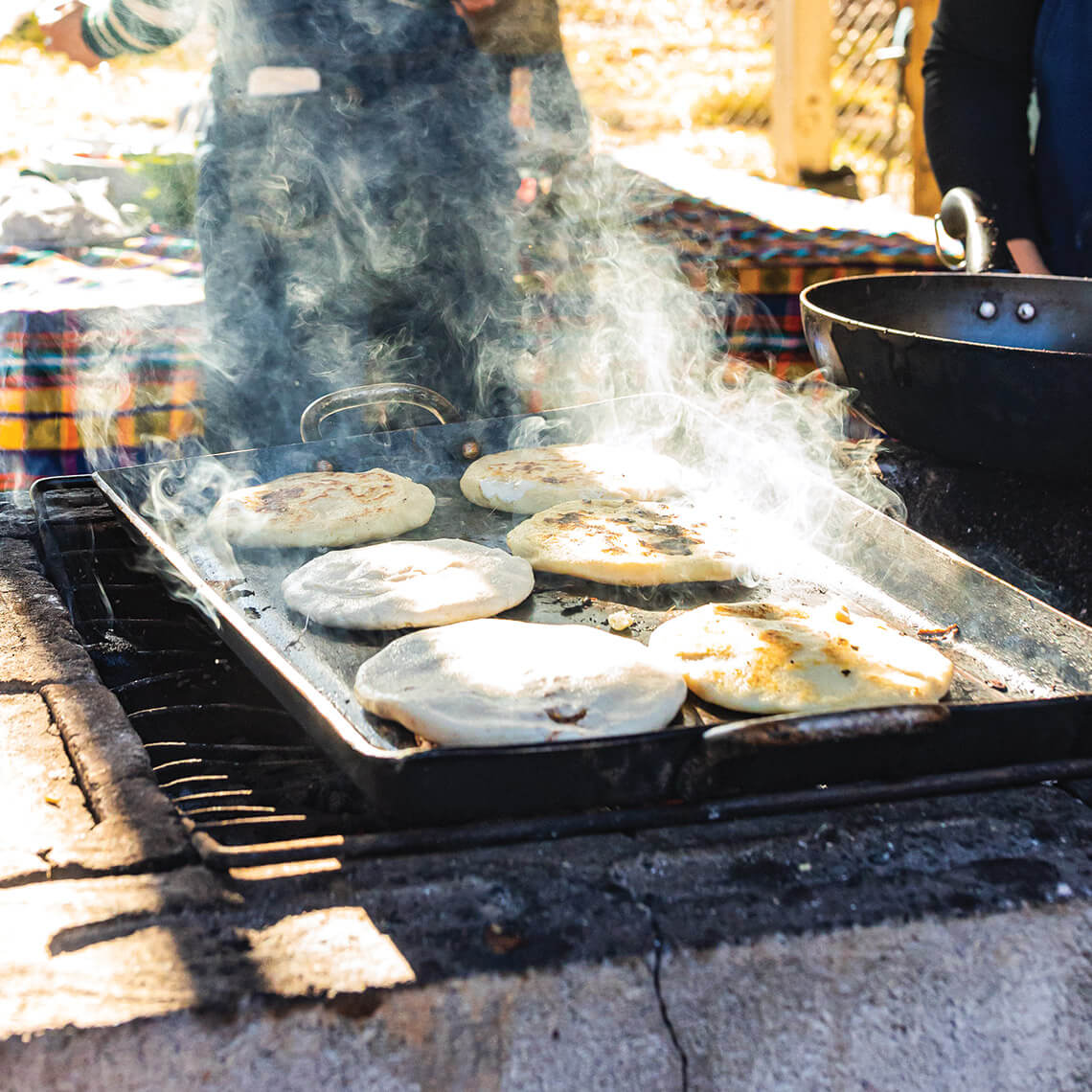 The kids crowd around the worktable, placing banana leaf squares on paper plates to contain any dripping fat, then topping their pupusas with slaw and salsa. Once the children are fed, the adults dive in, fixing plates to their liking and standing around to talk and catch up.

Inside the house, over the dining room table, is a painting of Telma’s outdoor kitchen in El Salvador that Miriam had made from a photograph. It looks remarkably like the kitchen outside — you can even spot the earthen coffee jug that Telma still uses.

As her extended family mills around outside, tucking into pupusas and all the condiments, Telma still hasn’t picked up a plate herself. She just stands quietly, smiling by the fire, watching as her two worlds, her two kitchens, and her great big family all come together, united by food. 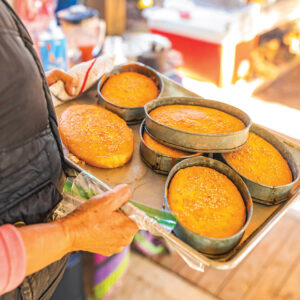 Telma Moran Juarez’s quesadillas aren’t Mexico’s filled tortillas. They’re small cakes similar to pound cake, made with fresh cheese and topped with sesame seeds. Moran bakes them in small tins about the size of sardine cans, but you could make them in muffin tins or in a baking pan. This is her daughter Miriam Espaillat’s translation of her recipe.

Beat cheese in a mixer to break it up, then beat in milk and sour cream. Let stand for 10 minutes.

In a separate bowl, beat together eggs, rice flour, and sugar.

Melt 8 tablespoons of butter and beat into egg mixture. Add the cheese mixture and the baking soda and beat well, for about 10 minutes.

With remaining butter, prepare the baking tins, muffin pan, or baking pan. Pour the batter into the buttered tins and sprinkle with the sesame seeds.

Bake for 30 to 45 minutes, until a toothpick comes out clean. Remove from baking tins and serve.

Curtido is a version of coleslaw that’s used to top pupusas or tacos. This is the version that Telma Moran Juarez uses in her pupusa shop in New York and at La Caseta in Charlotte.

Drain the cold water, then mix the cabbage and the remaining ingredients in a large mixing bowl, using your hands to mix well. Cover with water.

When ready to serve, use a slotted spoon to remove the coleslaw from the water, draining well. Can be kept, covered with water and refrigerated, for up to 10 days.